Accessibility links
Criminal Trial Begins Over 2017 Texas Flooding A criminal case in Houston alleges that employees at a chemical company should have prepared for the record flooding caused by Hurricane Harvey. 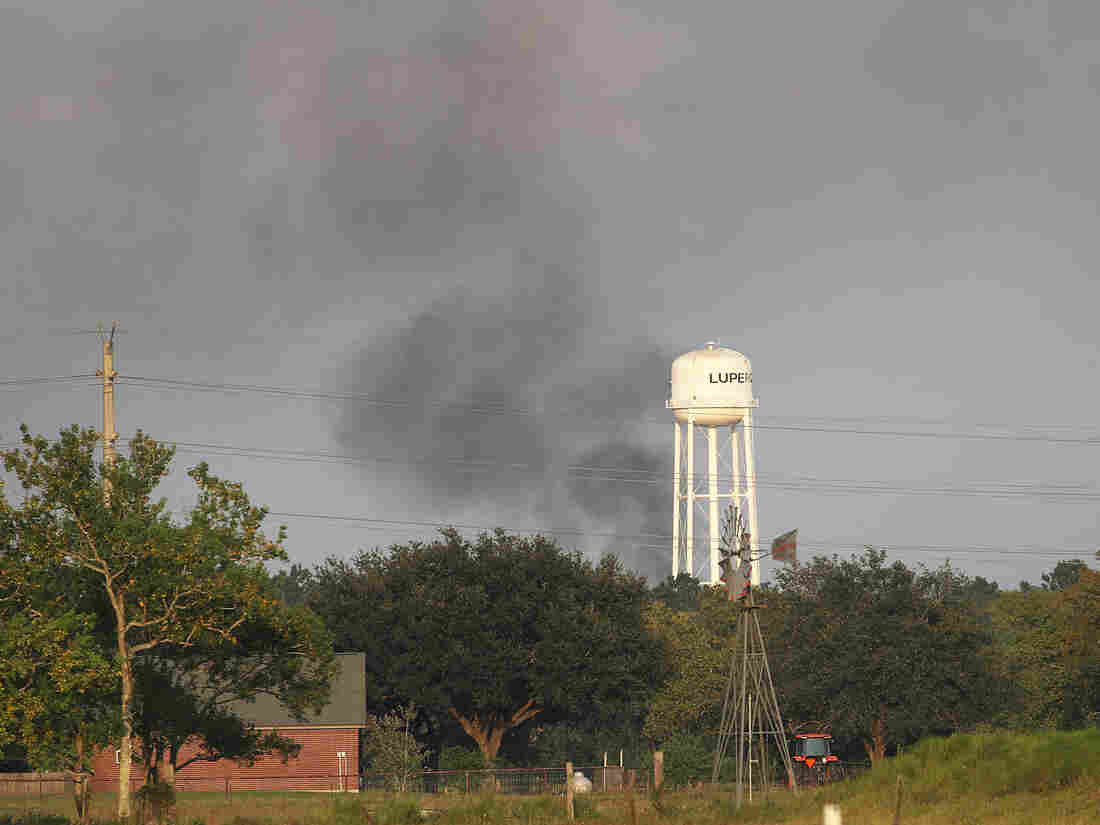 Smoke from chemical fires at a Houston-area facility owned by the company Arkema, which flooded during Hurricane Harvey in 2017. Trailers and storage containers that burned in the fires released soot and other air pollution. Joe Raedle/Getty Images hide caption 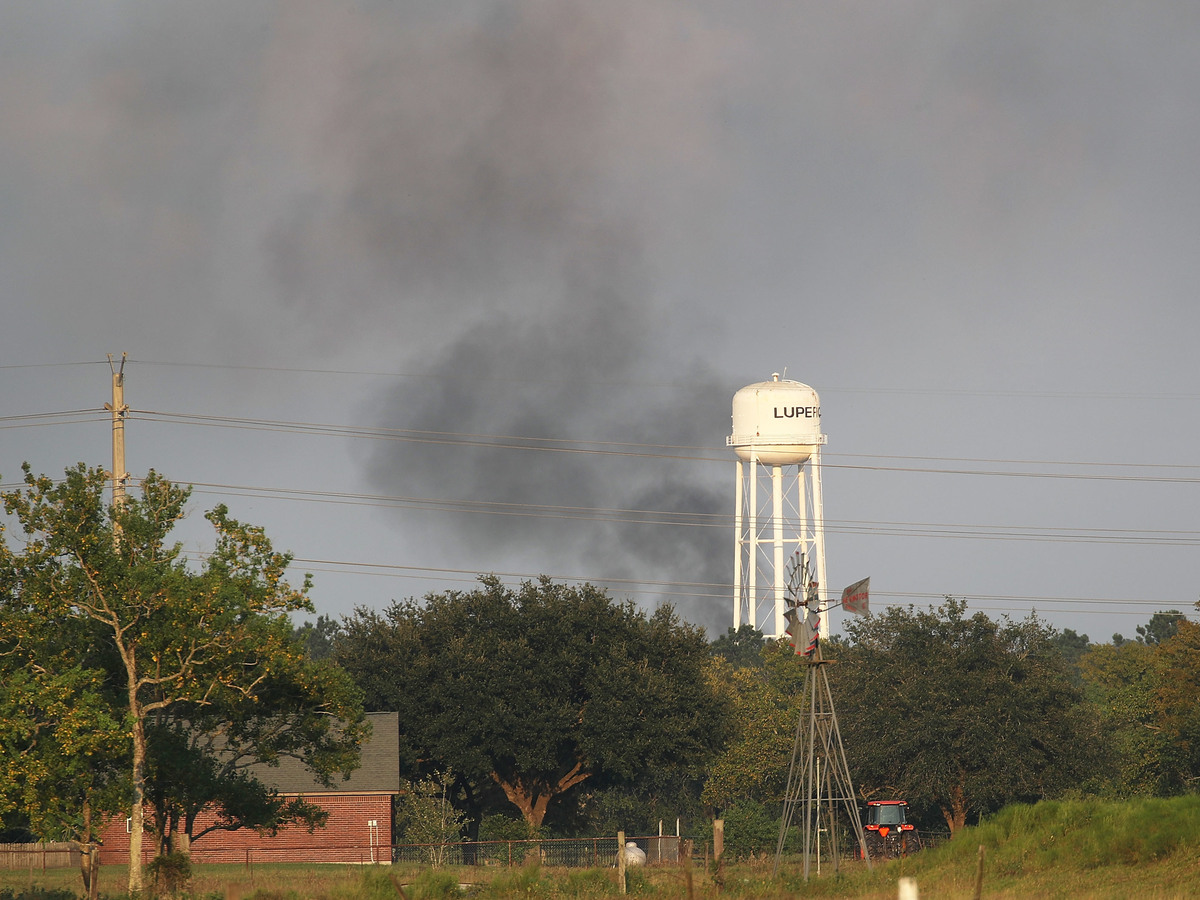 Smoke from chemical fires at a Houston-area facility owned by the company Arkema, which flooded during Hurricane Harvey in 2017. Trailers and storage containers that burned in the fires released soot and other air pollution.

Opening arguments ended Monday in Texas in the highest profile criminal case ever brought against a company and its employees for allegedly failing to adequately prepare for the effects of climate change.

The company, Arkema, owns a chemical plant outside Houston that flooded when Hurricane Harvey dumped more than 5 feet of rain on the area in 2017. The rising water knocked out power to the plant and caused volatile chemicals stored there to heat up and eventually catch fire. Burning containers and trailers sent up a column of black smoke above the facility for days.

It is that smoke that led to the current criminal case.

The Harris County District Attorney is charging Arkema, the local plant manager, and a company executive with recklessly emitting air pollution, and a third employee with assault. The criminal charges associated with air pollution allege that the company and its employees should have foreseen the risk of catastrophic flooding, and prepared for it better.

"We've had a new normal in Houston. We've had three 500-year floods in just a short period of time. And so it was a risk that was unjustifiable," Harris County District Attorney Kim Ogg told NPR in an interview after the first indictments were announced last year.

"Arkema always did the same thing in the face of an approaching storm system," he said. "They always choose to leave the product at risk, they never move a single gallon, a pint, any amount to avoid the risk."

The prosecution's focus on whether extreme weather events such as Hurricane Harvey are foreseeable — and whether companies are liable if they fail to adequately prepare for such storms — makes this case an important test of the legal system's power when it comes to adapting to wetter, more frequent storms driven by climate change.

"That's the big question in this case: When is something an act of God that is unforeseeable, versus when is [it] a thing that we should have prepared for, given what we know about the increasing impacts of climate change? And where are we going to draw that line?" says Elena Mihaly, a staff attorney at the Conservation Law Foundation, a Boston-based environmental law nonprofit.

Hurricane Harvey dropped the most rain of any hurricane in recorded history, going back to the 1880s. But climate models have long predicted increased flood risk in many parts the U.S. as the Earth gets hotter.

Scientists are also increasingly able to tie individual weather events to climate change, by comparing what happened during a given storm to a model of what would have happened without global warming. Attribution science, as it is known, has matured in recent years as climate models have gotten more sophisticated. Studies show that hotter-than-average water in the Gulf of Mexico strengthened Hurricane Harvey and increased the amount of rain it carried.

"Just because something is unprecedented does not mean that it's not foreseeable," says Mihaly, who is not personally involved in the Texas case. 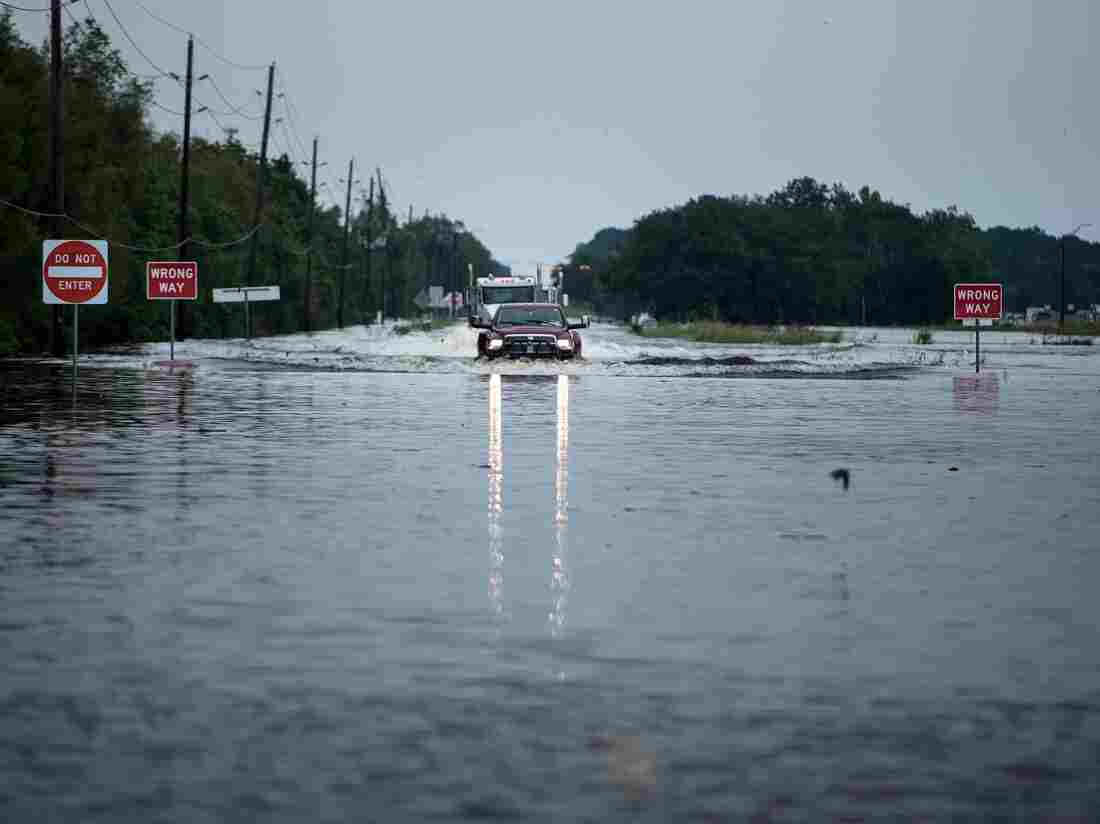 A flooded road leading to the Arkema chemical plant near Houston, Texas in August 2017. Multiple employees including the plant manager are facing criminal charges for allegedly failing to adequately prepare for flooding that caused massive chemical fires at the plant. Brendan Smialowski/AFP/Getty Images hide caption 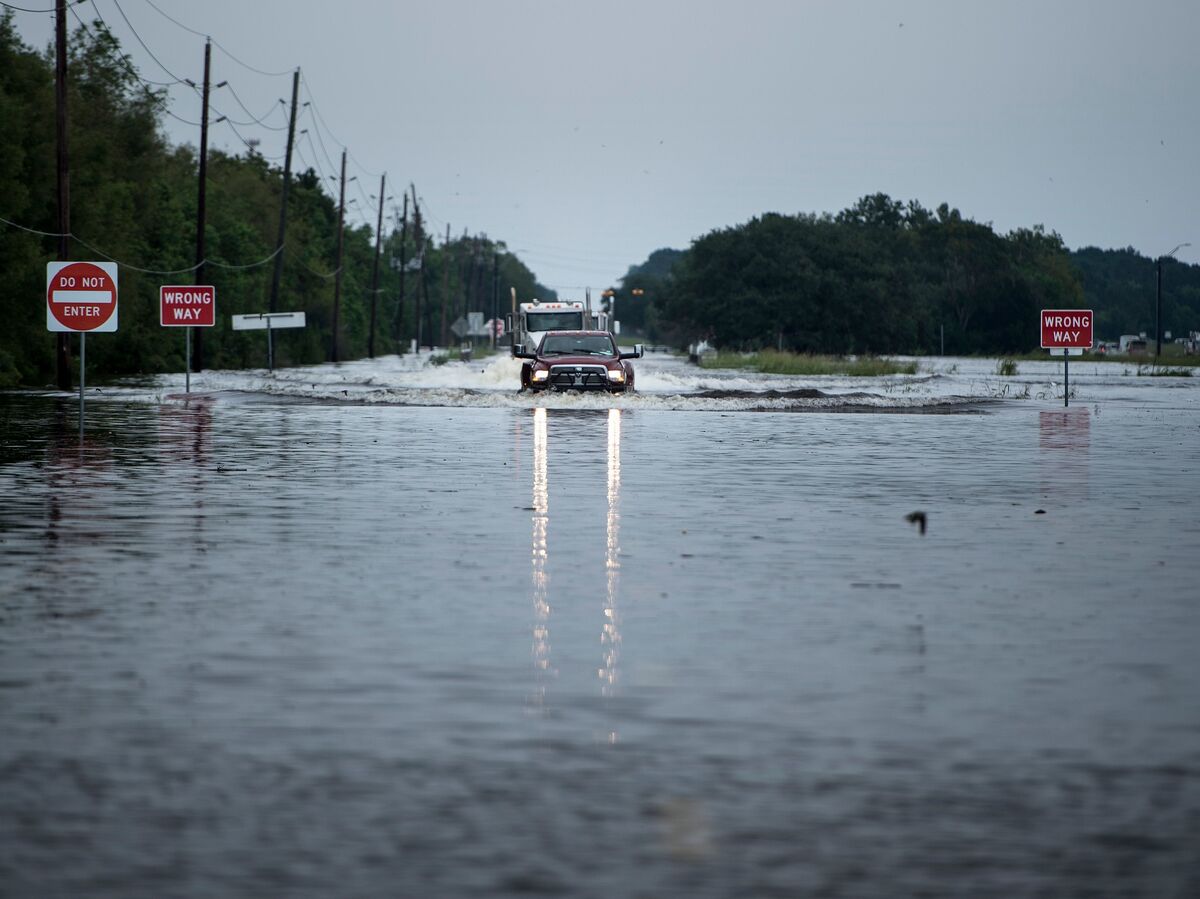 A flooded road leading to the Arkema chemical plant near Houston, Texas in August 2017. Multiple employees including the plant manager are facing criminal charges for allegedly failing to adequately prepare for flooding that caused massive chemical fires at the plant.

The Texas case could also influence how companies prepare for, and are held accountable after, storms that cause coastal or inland flooding. The plant at the center of the Texas case is one of many industrial facilities built in flood-prone areas.

"There are chemical plants, power plants, refineries, wastewater treatment plants, and all kinds of other industrial operations all along our rivers and coastlines. These facilities are potentially vulnerable to climate impacts," says Michael Burger, the executive director of the Sabin Center for Climate Change Law at Columbia University.

Climate change is also driving more frequent and severe wildfires, droughts and heat waves in the U.S., all of which are creating more liability for companies that operate in disaster-prone areas. For example, California's Pacific Gas and Electric was forced to file for bankruptcy protection after electrical transmission lines it owned and operated caused the deadly 2018 Camp Fire.

"The lawsuits and enforcement actions coming out of the Arkema plant explosion, the California wildfires and other recent disasters could send a signal that everybody needs to be prepared," says Burger.

It is still unclear, however, whether cases like the one in Texas will change how companies prepare for disasters, or whether courts will instead look to regulators to redefine what constitutes adequate preparation for climate-driven disasters.

Arkema defense attorney Rusty Hardin says that any concerns about how companies assess flood risk and prepare for climate change should be handled by regulators, not by the courts.

"Sometimes bad things happen that — there's no crime. There's no responsibility. It's not anyone's fault," Hardin told NPR in an interview after the indictments were first announced. "We need to look forward to the future and make sure that we are prepared for these kinds of things if this is going to be the new norm, and many think it is."

Katie Watkins of Houston Public Media contributed to this report.