Accessibility links
Interview: Sunny Jain On His Ennio Morricone, 'Wild Wild East' And His Father NPR's Ari Shapiro talks with the drummer and bandleader about his new album which re-invents the American cowboy myth, borrowing from Bollywood, hip-hop and traditional Punjabi music. 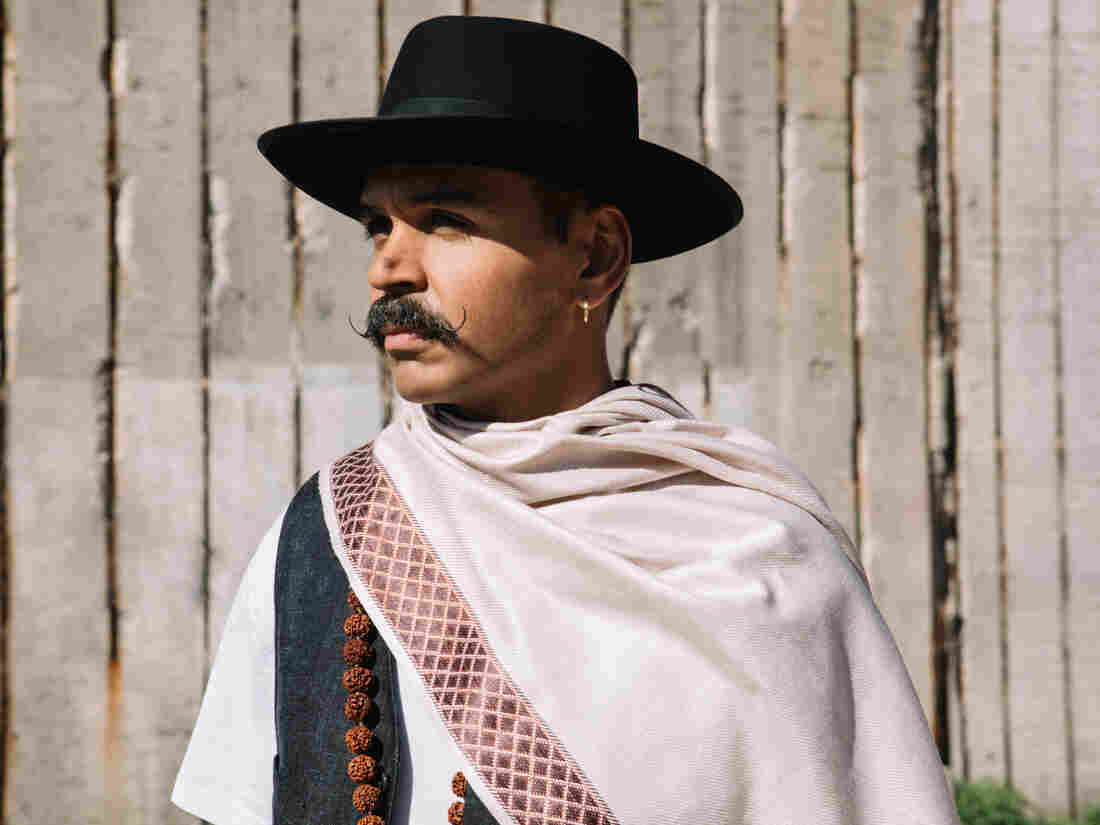 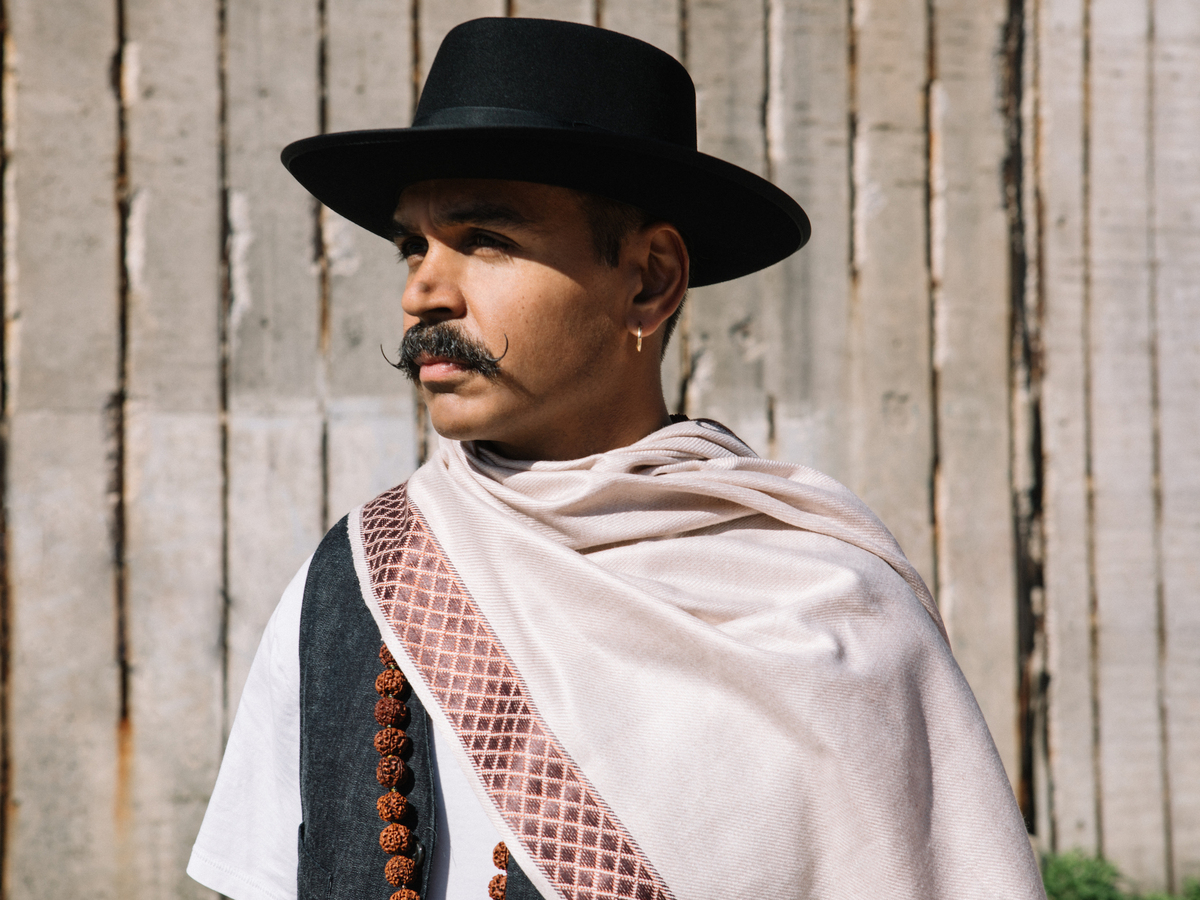 Inspiration can strike anywhere. For Sunny Jain, the inspiration for his new album Wild Wild East came while he was on stage at a concert at the Global Village in Dubai, which he describes as "kind of like the Epcot center of the Mideast."

Like the famous Disney World destination, the Global Village has representations of various nations and cultures. Most countries were represented by architecture — Turkey by Byzantine and Ottoman art, France by the Eiffel Tower — but the United States was represented by a person: a massive statue of a white male cowboy, gun in holster.

"I just sat there like, holy cow, [thinking about] this narrative of the cowboy and how it just keeps persisting as this American identity," Jain remembers. At that moment, he decided that rather than fight the American cowboy story, he would expand it.

On Wild Wild East, Jain draws heavily from spaghetti westerns, but also from hip-hop and the Bollywood songs his immigrant parents brought with them from India, combining all of those familiar parts into something completely new. The album is also a celebration of his father, who died in November while Jain was putting the finishing touches on the album.

NPR's Ari Shapiro spoke to Sunny Jain about the story behind the album, reworking techniques from the film composer Ennio Morricone and writing music inspired by his father as his father's health was declining. Listen in the player above, and read on for a transcript of their conversation.

Ari Shapiro: This album opens with a kind of overture that sounds to me like the theme song to a Bollywood cowboy movie. This track is called "Immigrant Warrior." What did you have in mind here?

Sunny Jain: I was thinking about the journey that my parents took: specifically my father going through one of the biggest mass migrations in world history in 1947 with the Partition and independence of India and Pakistan; moving to eastern Punjab and then eventually moving to America and this courage and confidence that he's kind of traversed the world with. Then the song takes a dip where he enters America. It's a mystery and he's trying to figure out where's his footing here, his foundation.

You're primarily a drummer, and on this album you use your instrument to imitate the sound of galloping hooves or a train thundering down a track. Can you tell us about how you actually do that with your instruments?

I think about Ennio Morricone and his utilization of the snare drum. He wrote all the spaghetti westerns of Sergio Leone — everyone knows the Clint Eastwood movies like Fistful of Dollars and The Good, The Bad and The Ugly — and had a way of just creating this cinematic landscape with the drums. So I'm employing it with a little bit of snare drum, but I'm really utilizing this Punjabi drum called the dhol.

The dhol is a big, barrel-shaped instrument. It's slung over the shoulder, and there's a high side — a treble side — and a bass side. It's kind of synonymous with Punjabi culture in the sense of it's festive, it's joyous, it's connected to Bhangra music and Bhangra dance, and folk music. So I'm also employing that in this sense of galloping. "Wild Wild East" is a good [example].

What are you trying to create here with the dhol?

What Happens When 350 Musicians Meet For The First Time In Brooklyn?

I'm trying to create some forward momentum, traveling through desert; I'm thinking about the Thar Desert of Rajasthan. I'm trying to create a sense of urgency, I'm trying to replace the kind of motifs that Ennio used — that to me sound almost Native American or like Native Indigenous calls — and replacing them with Punjabi, with Indian calls, with the Punjabi rhythms played by the saxophone, the Punjabi dhol.

One of my favorite songs on the album is a song whose title translates in English to "My Heart Is A Vagabond." I can imagine a cowgirl singing this while the sun sets over the plains, but this is actually an old Hindi song, is that right?

It is. One of the things we talked about — Grey McMurray on guitar here and this is Ganavya on vocals — was bringing out that kind of bluesy and country infection that you hear in Westerns through the guitars. But you certainly hear the bending in Ganavya's voice, with inflections of Carnatic music.

Am I right that your father used to sing this song to your mother?

Yeah. There's two Bollywood tracks on here: "Aye Mere Dil Kahin Aur Chal" and "Hai Apna Dil to Aawara." My dad, he was an amateur musician — in the sense that he was an enthusiast, and loved singing and playing Bollywood tracks on his reel-to-reel — and he had a harmonium and a bulbul tarang, which is like an Indian banjo. He would take it out, and he had a repertoire of four or five songs. Two of those songs were these two songs on the album.

I understand your father died late last year while you were finishing this album. Is that right?

He did. He passed Nov. 14. He had a decline in health in April, and that was around the time when I was rehearsing all the music. We went into the studio in May, and that was a four, five month process of his eventual decline. I was playing him the music in the hospital and rehab, and it was nice to be able to play the stuff for him. There's a little short snippet of "Aye Mere Dil Kahin Aur Chal" on his actual bulbul tarang that he brought from India that migrated here to American.

I know this whole project is a sort of tribute to him, about the journey that he made so that you could be born in the United States, grow up in Rochester, N.Y. What would he think of this album now that it's completed in the world?

I think he'd be pretty thrilled by it. It was interesting, after we recorded and with everything that was happening with my father, there [were] two or three weeks that I couldn't even listen to this music; it was just too painful, it was reminding me of what was happening, and I knew eventually what was to come. And it took me a while to come back to it, but I'm thrilled that we were able to make this album, and that he was able to hear some of it.