Accessibility links
U.S. Forces To Begin Leaving Afghanistan In Show Of Good Faith A peace deal signed with the Taliban calls for 4,000 of the approximately 13,000 U.S. forces in Afghanistan to leave within 135 days and for all U.S. troops to be out within 14 months. 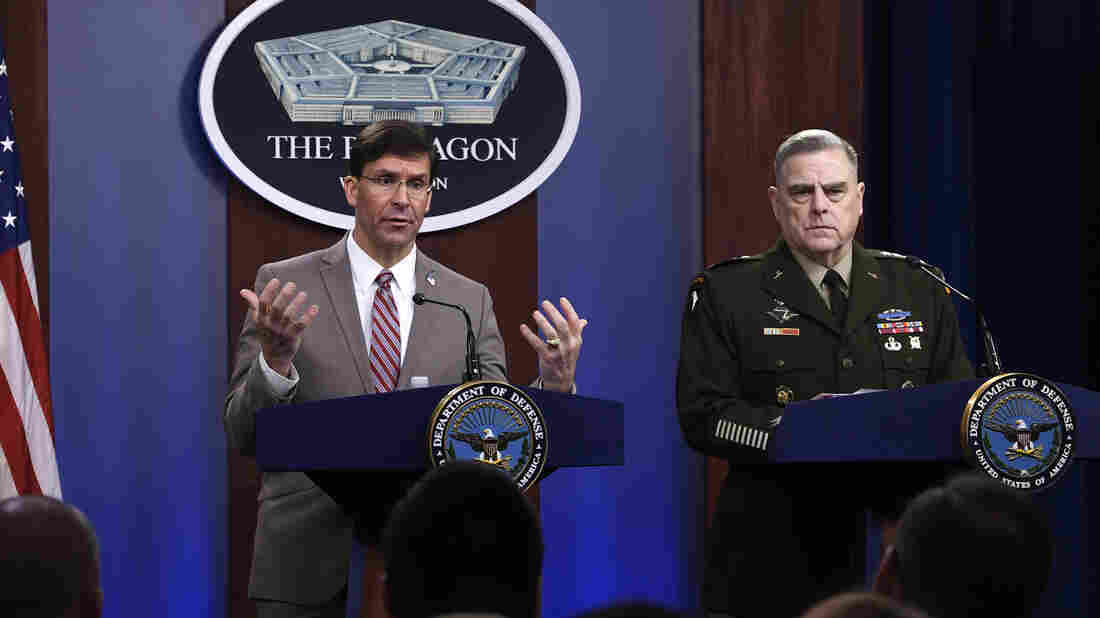 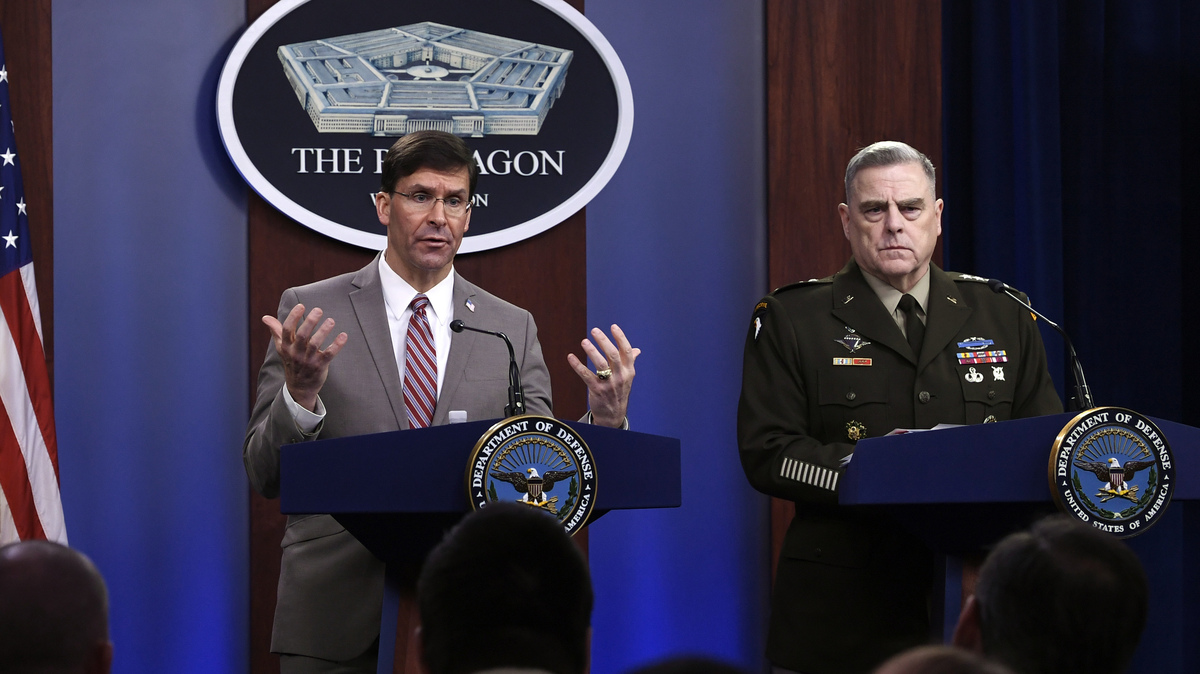 Defense Secretary Mark Esper (left) speaks as Chairman of the Joint Chiefs of Staff Army Gen. Mark Milley listens during a briefing at the Pentagon on Monday.

U.S. Defense Secretary Mark Esper has given the go-ahead to begin a drawdown of American forces in Afghanistan, despite reports that the Taliban is ending a partial ceasefire and has resumed attacks on Afghan forces.

Esper says his troop withdrawal order to Army Gen. Scott Miller, the U.S. commander in Kabul, is in line with a U.S. peace deal with the Taliban, which calls for such a drawdown to begin within 10 days of its Saturday signing in Doha.

Under the terms of that agreement, 4,000 of the approximately 13,000 U.S. forces in Afghanistan would leave within 135 days and all American troops would be out within 14 months.

"My instruction to the commander was, 'Let's get moving, let's show our full faith and effort to do that,' " Esper told reporters Monday at the Pentagon. "I've said on many occasions that I'm comfortable we can still conduct all the missions we need to conduct at [a force level of] 8,600."

The Taliban's military commission, meanwhile, says that the "reduction in violence," or partial truce, that was in place for a week before the peace deal's signing is now over. Taliban fighters have been ordered to resume attacks on Afghan forces backing what the insurgents call Kabul's "puppet administration" — but to adhere to the agreement with the U.S. and refrain from targeting international forces.

Joint Chiefs Chairman Gen. Mark Milley, who appeared with Esper, was asked about reports of a blast Monday in the eastern Afghan province of Khost that killed three civilians and wounded 11 more.

The Taliban denies responsibility for the Khost explosion, which occurred at a soccer field.

The attack is one of a number of complications to emerge since Saturday's signing of the peace deal.

On Sunday, Afghan President Ashraf Ghani rejected a provision in the U.S.-Taliban agreement that calls for the release of up to 5,000 imprisoned Taliban fighters and 1,000 Afghan forces being held by the Taliban. The swap was to take place prior to the start of talks between the Taliban and Afghan authorities due to begin by mid-March.

"We've got to work our way through that," Esper said of Ghani's refusal to free the Taliban prisoners before those negotiations begin. "Our commitment under the agreement was to enable, to facilitate that exchange of persons between the Taliban and the government of Afghanistan, and as I've said over and over, it's all conditions-based."

"This is going to be a long, windy, bumpy road," Esper said of the peace agreement's implementation. "There will be ups and downs, and we'll stop and start. That's gonna be the nature of this over the next days, weeks and months, and so I'm not going to get too excited about what happens at the moment."