Accessibility links
Pence On Coronavirus: 'Risk Remains Low,' Says Treatments On The Horizon As the national deathtoll rises to six, the vice president says most Americans using "common sense" are safe. Meanwhile, lawmakers remain at odds over a funding package to fight the epidemic. 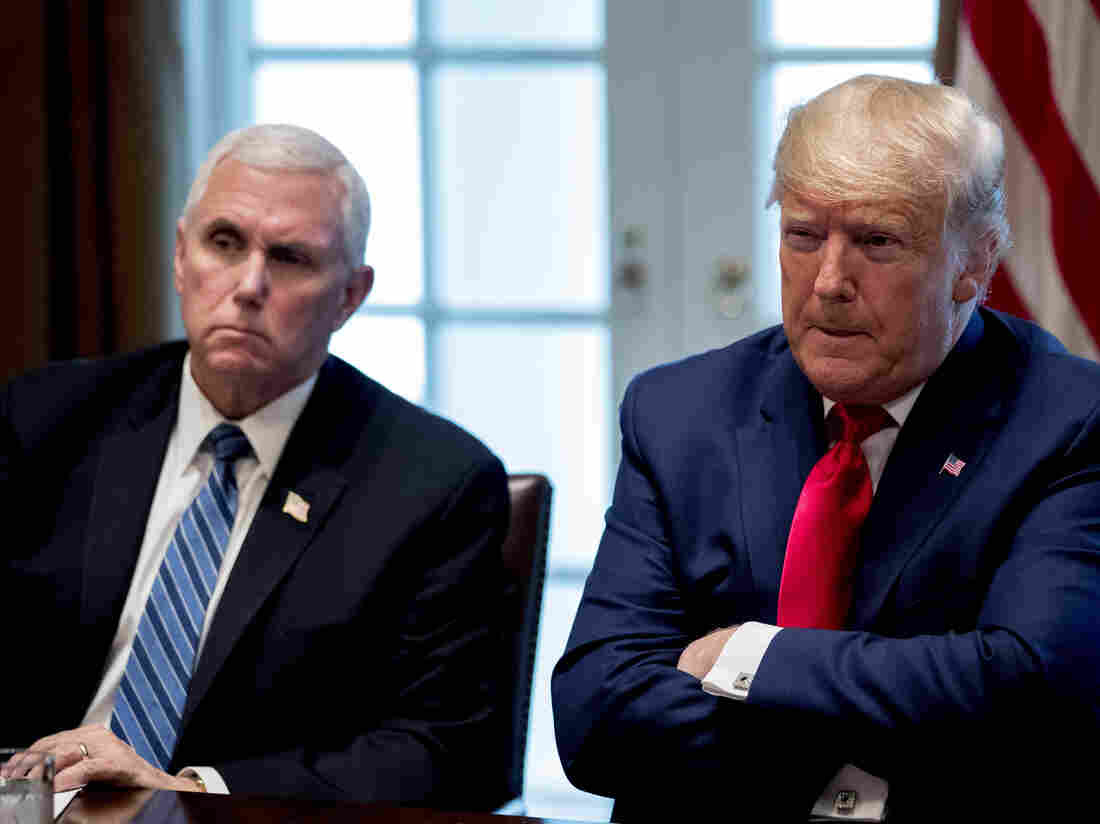 President Donald Trump and Vice President Mike Pence, left, attend a meeting with pharmaceutical executives on the coronavirus in the Cabinet Room of the White House on Monday. Andrew Harnik/AP hide caption 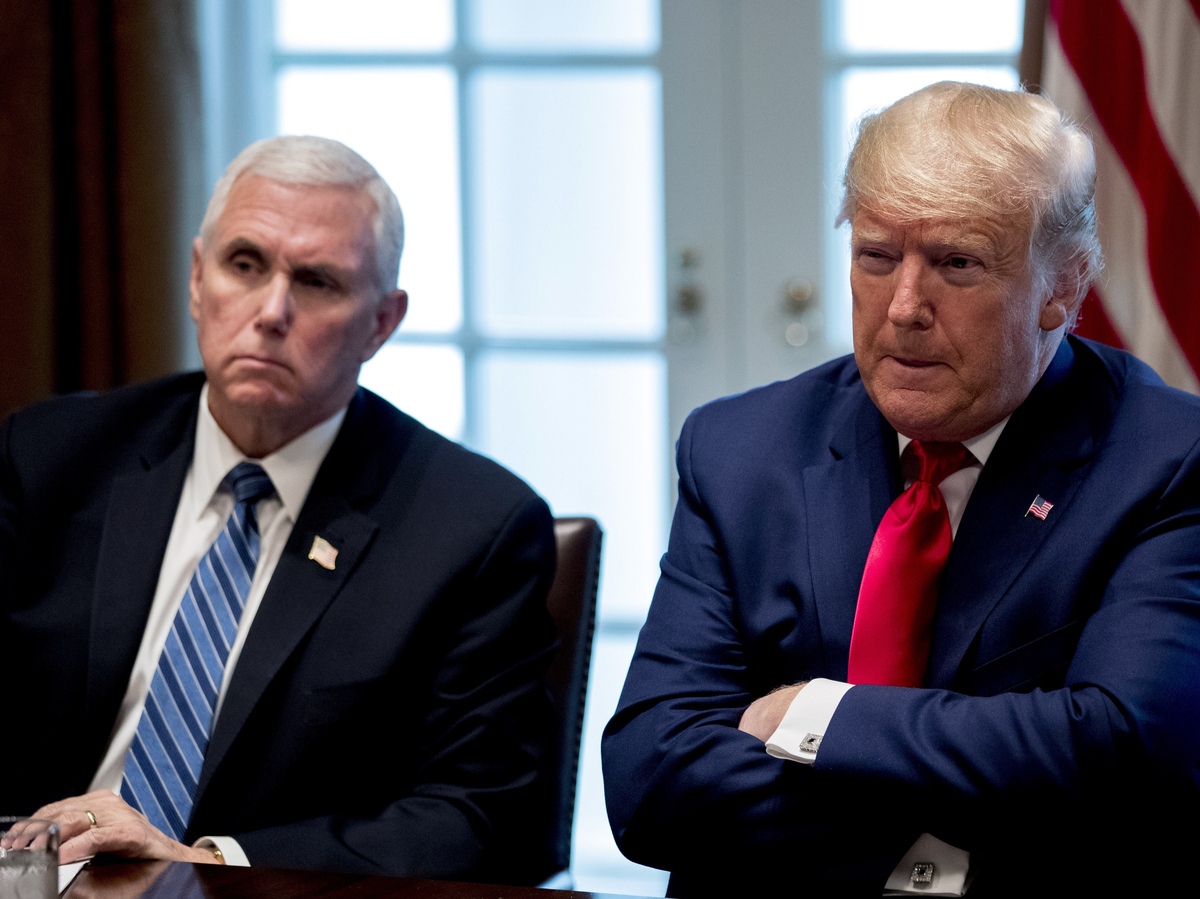 President Donald Trump and Vice President Mike Pence, left, attend a meeting with pharmaceutical executives on the coronavirus in the Cabinet Room of the White House on Monday.

On the heels of a meeting with President Trump and pharmaceutical company leaders, Vice President Pence offered words of calm to the American public about the spread of coronavirus: "The risk remains low," he repeated numerous times during a news conference with reporters on Monday afternoon.

Pence, who on Friday was appointed by the president to lead the Coronavirus Task Force, delivered the remarks from the White House press briefing room, where he was surrounded by many of the nation's top health officials.

The vice president also said treatments for COVID-19, the illness caused by the virus, could be available within the next two months. Several pharmaceutical companies "formed a consortium to share information" about the development of different treatments, he said.

Despite the day's developments of a cluster of four new deaths tied to COVID-19 in Washington state, Pence underscored that the danger to most people is minimal.

"This is a time to use common sense, a good time to wash your hands," Pence said.

The infections "are centered in very specific areas that we're working to identify the source on," he said, clarifying that 29 cases are concentrated in California or Washington.

As of Monday afternoon, six people in the U.S. had died after contracting the respiratory disease, all of which occurred at the same hospital in Kirkland, Wash.

Across the country, there are 43 cases of COVID-19 detected in the U.S., according to the latest figures from the task force. Seventeen of those are "travel related in one way or another" and 26 "are believed to have been spread "person-to-person," Health and Human Services Secretary Alex Azar said during the same news conference.

Pence also sought to quell fears about the virus arriving in the U.S. from foreign shores.

Since January, U.S. airports have been screening travelers from China, where the disease was first detected. However, in recent weeks, South Korea and Italy have also seen a surge in cases.

"Within the next 12 hours there will be 100% screening on all direct flights across all airports in Italy and South Korea," Pence said.

New flexibility designed to spur the capacity to test for coronavirus means that close to a million test kits will be available by the end of the week, Stephen Hahn, the head of the U.S. Food and Drug Administration, told reporters.

Meanwhile, in the meeting with 10 pharmaceutical industry leaders, the president urged executives to work together to quickly develop treatments and vaccines for coronavirus.

"Get it done. We need it. We want it fast," Trump told the executives at the end of a lengthy roundtable session.

"Anybody delays you – please call me," he said.

National Institutes of Health official Anthony Fauci cautioned the president that it would take a year or more to develop a vaccine, no matter how quickly the companies work.

However, the president, speaking to supporters later in Charlotte, N.C., said: "They're gonna have vaccines, I think, relatively soon."

He promised "something that makes you better" even sooner.

In an apparent attempt to put the virus in context, Trump also noted that tens of thousands of Americans die each year of the flu, a fact he said was new information for him: "Nobody knew that; I didn't know that," he said.

Lawmakers work toward consensus on funding

In Congress, appropriations House aides say they are close to unveiling a supplemental funding bill to address the coronavirus crisis as early as Tuesday, and expect to be the first chamber to offer up the plan. A congressional aide familiar with the negotiation says the package will be worth between $7 billion and $8 billion.

But things are moving more slowly on the Senate side, where Majority Leader Mitch McConnell said he expects the chamber to pick up a funding bill in the "coming two weeks." He also noted appropriations members and staff worked on a supplemental funding plan throughout the weekend.

Vermont Democratic Sen. Patrick Leahy, the ranking member of the Senate Appropriations Committee, says he hopes the Senate will vote on the coronavirus funding plan "ideally this week." If not, he said it could come to a vote by early next week, suggesting lawmakers should work through the weekend if it isn't finished by Friday.

Trump said he hopes the Federal Reserve considers stimulus measures to bolster the economy, which has taken a hit due to the epidemic.

He said, without providing details, that he would consider more restrictions for travelers from some countries hit hard by the virus.