Accessibility links
Supreme Court Weighs Fate Of CFPB, Other Independent Agencies In the short run, the fate of the Consumer Financial Protection Bureau hangs in the balance. In the long run, the future of independent regulatory agencies are at stake. 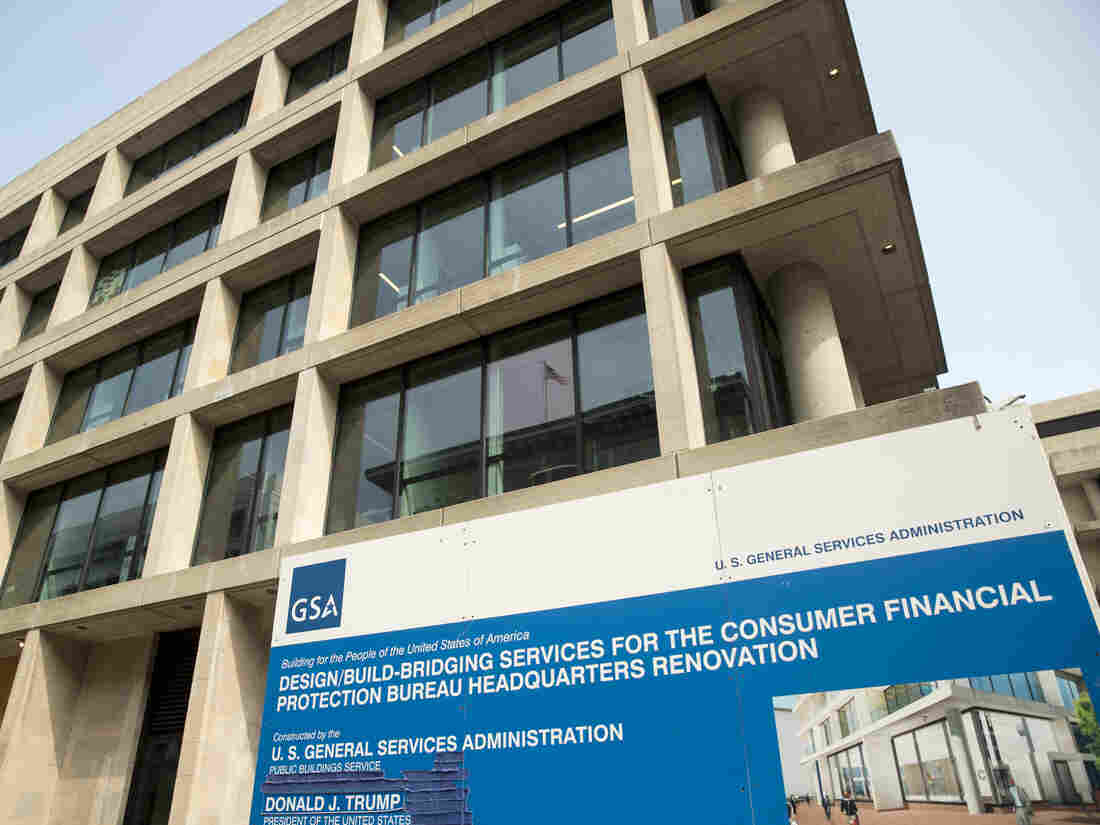 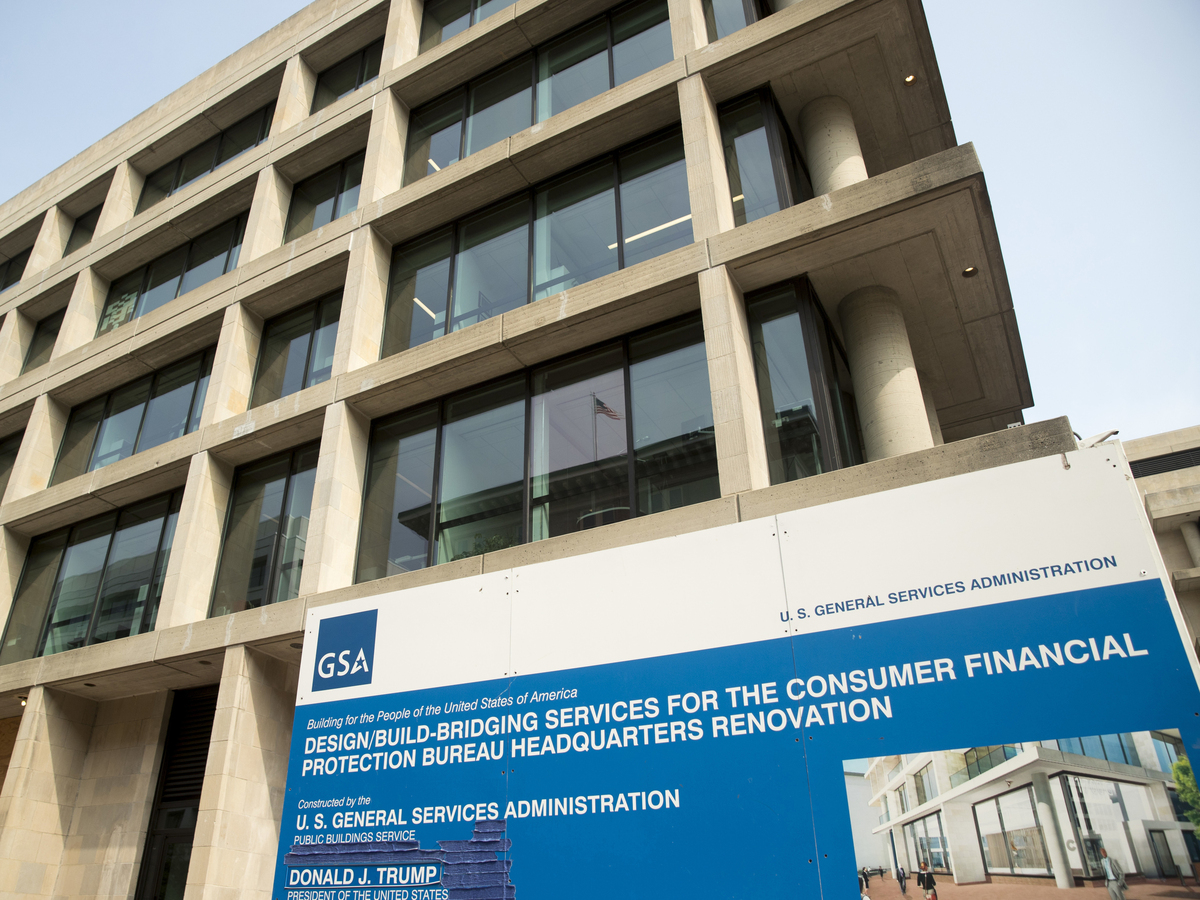 At the U.S. Supreme Court on Tuesday, the Trump administration is seeking to make it easier for the president to call in the heads of the nation's independent agencies and say those words he was famous for on TV: "You're fired!" In particular, the administration is asking the court to restrict or reverse a decision that dates back nearly a century and that has been repeatedly reaffirmed.

In the short run, the fate of the Consumer Financial Protection Bureau hangs in the balance. In the long run, so too could the fate of independent regulatory agencies that have long governed everything from monetary policy to public health and safety.

A new watchdog for a broken system

In 2008, the U.S. economy was on the brink of financial disaster. Following nearly two decades of deregulation, U.S. banks had been offering home loans to people with poor credit, overleveraging and engaging in widespread, excessive lending practices, resulting in the worst financial crisis since the Great Depression. 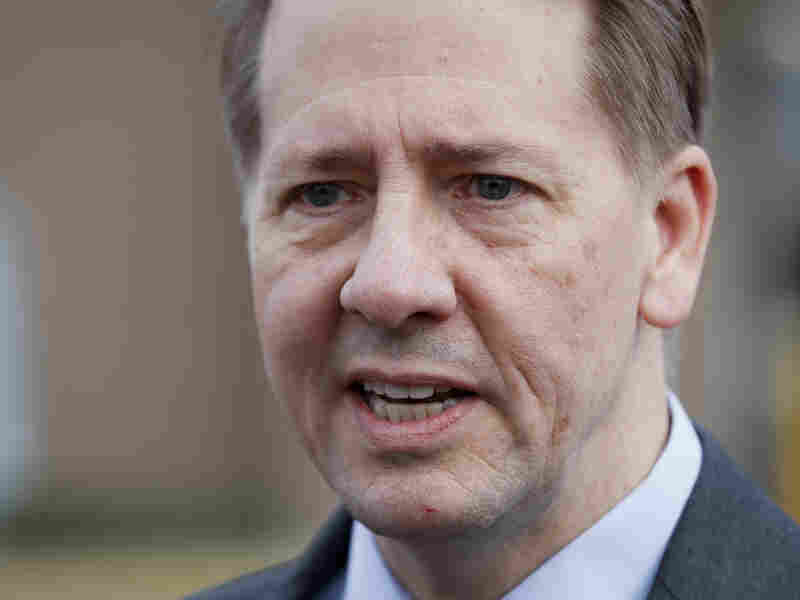 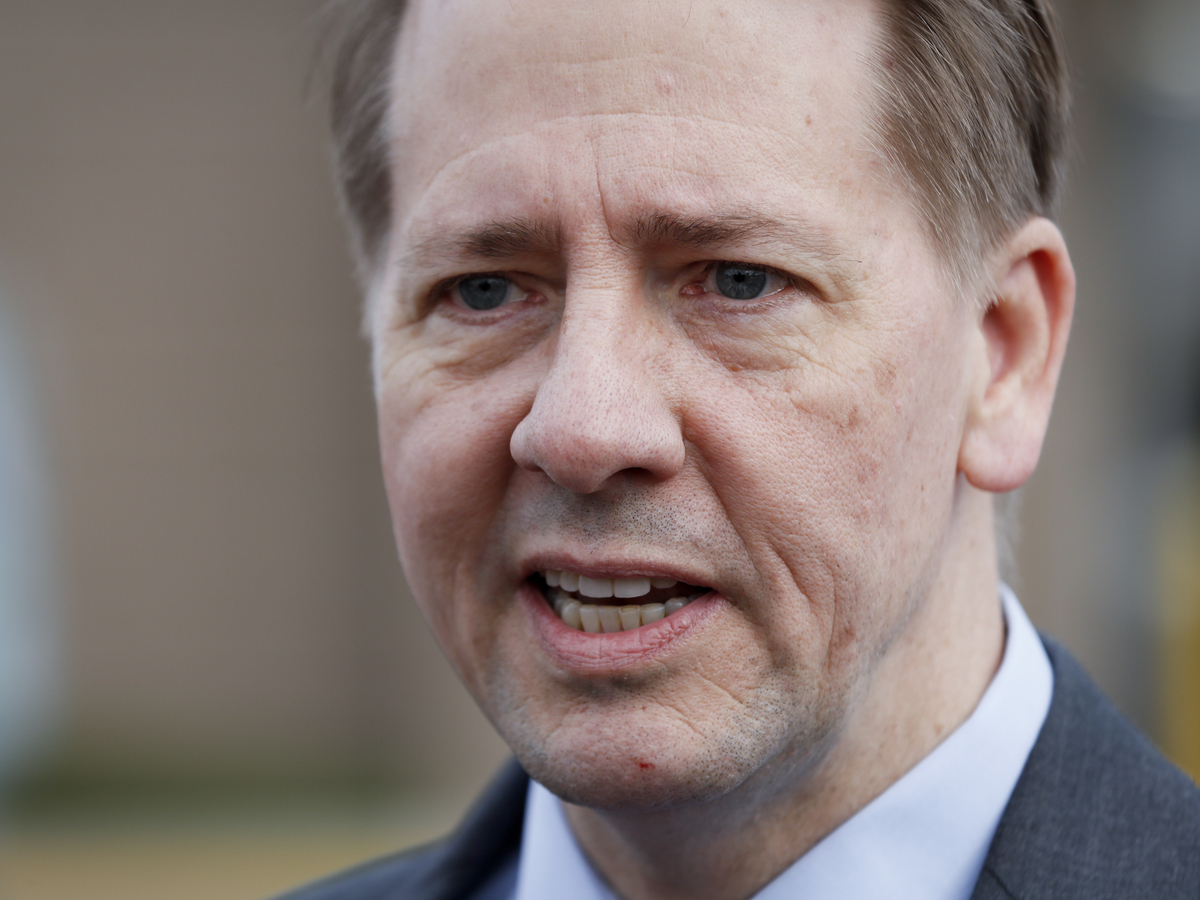 In 2010, Congress sought to reestablish oversight and regulation of the financial system. Among the remedies enacted was a law that consolidated the consumer protection powers of seven agencies into one — the CFPB. Placed in the offices of the Federal Reserve and funded directly by the Fed, the new agency was charged with protecting consumers and preventing a repeat of the 2008 financial crisis.

"The CFPB had two roles. One was to try to prevent an economic collapse of that kind ever happening again, and that was done largely through putting in place rules that safeguarded the mortgage market and ferreted out a lot of the irresponsible and ultimately failed lending that had occurred," says Richard Cordray, the first director of the CFPB. The other, he says, was "to protect consumers."

Once in place, the bureau moved aggressively to protect consumers from bad actors in the banking and financial services sector. A prime example was the crackdown on Wells Fargo. The bank faced heavy fines for creating an estimated 3.5 million fake deposit accounts and fake credit cards in the names of people who didn't authorize them and for improperly repossessing the cars of military personnel. Also in the CFPB's sights — bill collectors, telemarketers and others accused of misleading consumers.

The CFPB under fire

Among those facing scrutiny — Seila Law, a law firm in California, which was under investigation on allegations that it charged consumers illegal upfront fees for debt relief services and that it deceived consumers about those services with misleading advertising and marketing material.

As part of its investigation, the CFPB issued a letter to Seila demanding documents. The firm refused to comply, contending that the structure of the agency is unconstitutional because its director cannot be fired "at will" by the president. Instead, the bureau's director, like the leaders of other independent federal agencies, can only be fired by the president "for cause" — specifically, inefficiency, neglect of duty or malfeasance.

Seila lost that argument in the lower courts, but now the Supreme Court will take a crack at the case. Tuesday's arguments will center on a longstanding Supreme Court decision that forms the basis for all independent federal agencies.

In 1933, President Franklin Roosevelt fired William Humphrey, one of five commissioners on the Federal Trade Commission. Roosevelt didn't have a problem with Humphrey's job performance. The sole reason for the dismissal was that Humphrey had been appointed by the previous president, Republican Herbert Hoover, and was a conservative who disagreed with Roosevelt's policy views. Because the FTC had oversight over many progressive New Deal policies, Roosevelt wanted Humphrey replaced with his own appointee.

The Supreme Court ruled in 1935 unanimously that the president could not dismiss FTC commissioners the way he could his own Cabinet or other members of his administration. It said that Congress had created the FTC to perform quasi-judicial, quasi-legislative functions and therefore intended it to be politically independent. The Humphrey decision has been reaffirmed dozens of times since it was decided 85 years ago.

On Tuesday, however, Seila Law and the Trump administration will argue that the Humphrey decision does not apply to the CFPB. They say the bureau is different because its power rests in the hands of a single director, as opposed to a multimember commission.

It is an argument that is likely to find support among the five conservative members of the current court.

Before joining the court, Justice Brett Kavanaugh in particular took issue with the Humphrey decision repeatedly. But he is not alone, Justice Neil Gorsuch believes that the executive has been unconstitutionally weakened by a surplus of independent regulatory agencies and executive branch officials that are beyond the president's control. Justice Samuel Alito expressed similar views before joining the court, saying of the presidency, "the president has not just some executive powers, but the executive power — the whole thing."

Supporting that view is much of the business community. 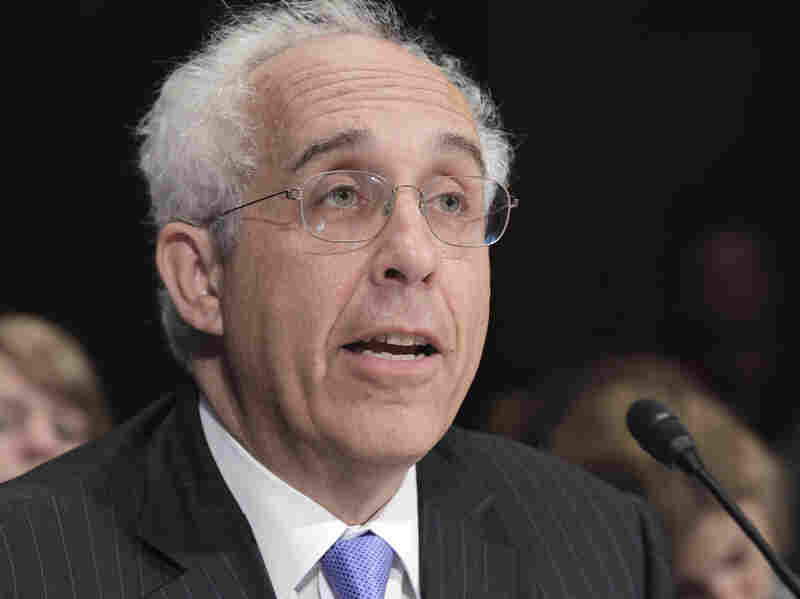 Andrew Pincus argues that the CFPB's single-director structure makes it different from the multimember independent agencies in much of the nation's regulatory structure. J. Scott Applewhite/Associated Press hide caption 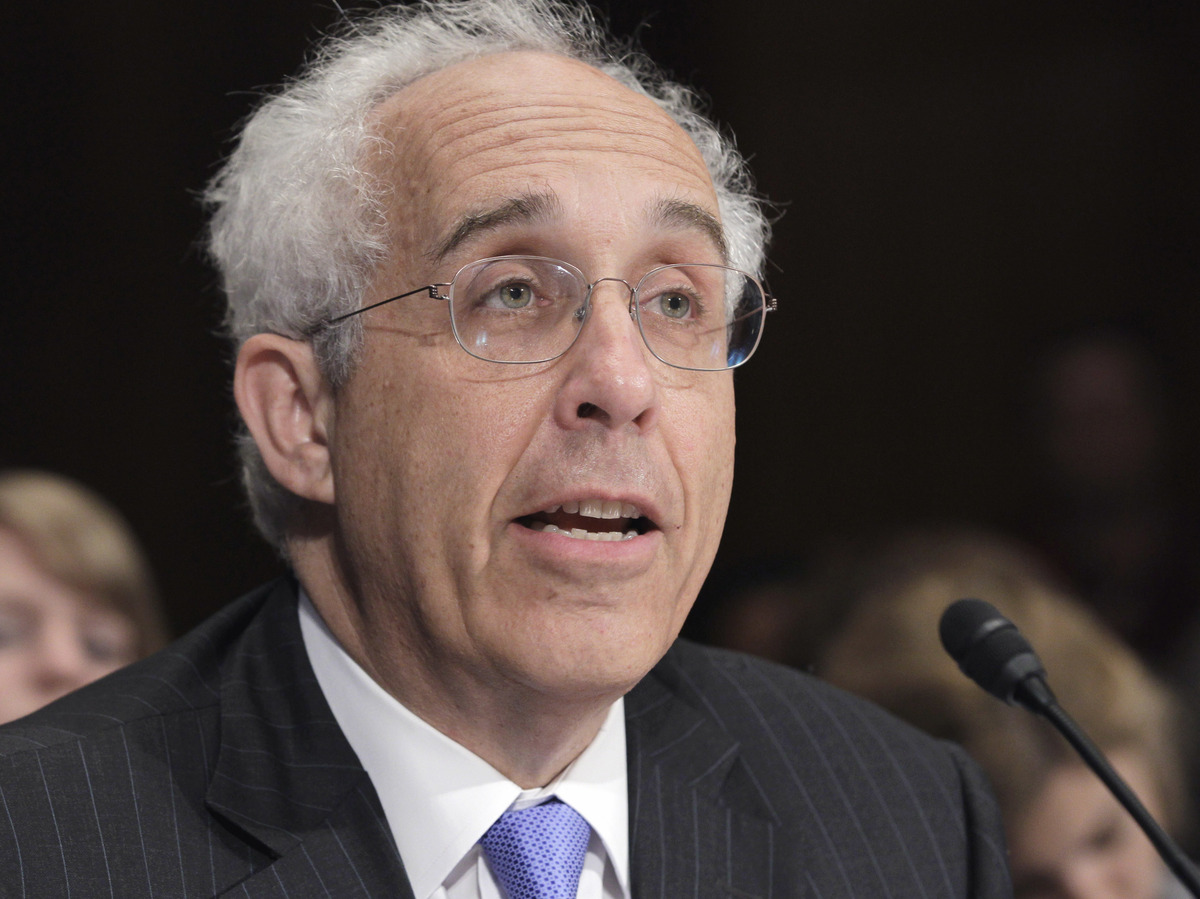 Andrew Pincus argues that the CFPB's single-director structure makes it different from the multimember independent agencies in much of the nation's regulatory structure.

"The theory of our government is that the popularly elected president will appoint officials and remove them if they're not doing what he wants," says Andrew Pincus, who wrote a brief on behalf of the U.S. Chamber of Commerce in this case. "If you take away the president's power to remove someone, then you're drastically limiting" the president's "political accountability."

Pincus argues that the CFPB's single-director structure makes it different from the multimember independent agencies that dominate much of the nation's regulatory structure.

Multimember agencies are required to have people from different parties, he observes. The president picks the chairman "who has a lot of control about how [the agency] operates. The terms are staggered, so most presidents will have an opportunity to appoint a number of those people." And the very fact that they are multimember agencies means there has to be a majority in order to act. All of that, Pincus says, "is a check on the exercise of government power" and none of those features exists when an agency has a single director.

The Chamber of Commerce has not asked the court to go further than distinguishing between the CFPB and agencies governed by a multimember board.

The Trump administration, however, is willing to go all the way, telling the court that if need be, it should reverse the 1935 Humphrey decision and make all independent federal agencies completely subservient to the president.

No government defense for the CFPB

Typically, the Department of Justice defends federal agencies facing legal challenges. But the Trump administration agrees with Seila Law, meaning there was nobody to defend the CFPB in this case. So, the Supreme Court appointed former Solicitor General Paul Clement, a noted conservative, to argue on behalf of the bureau. 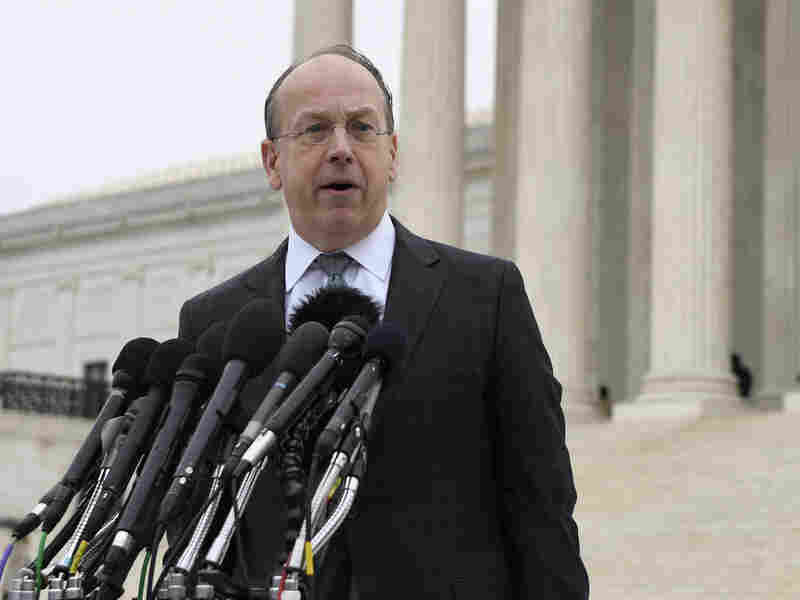 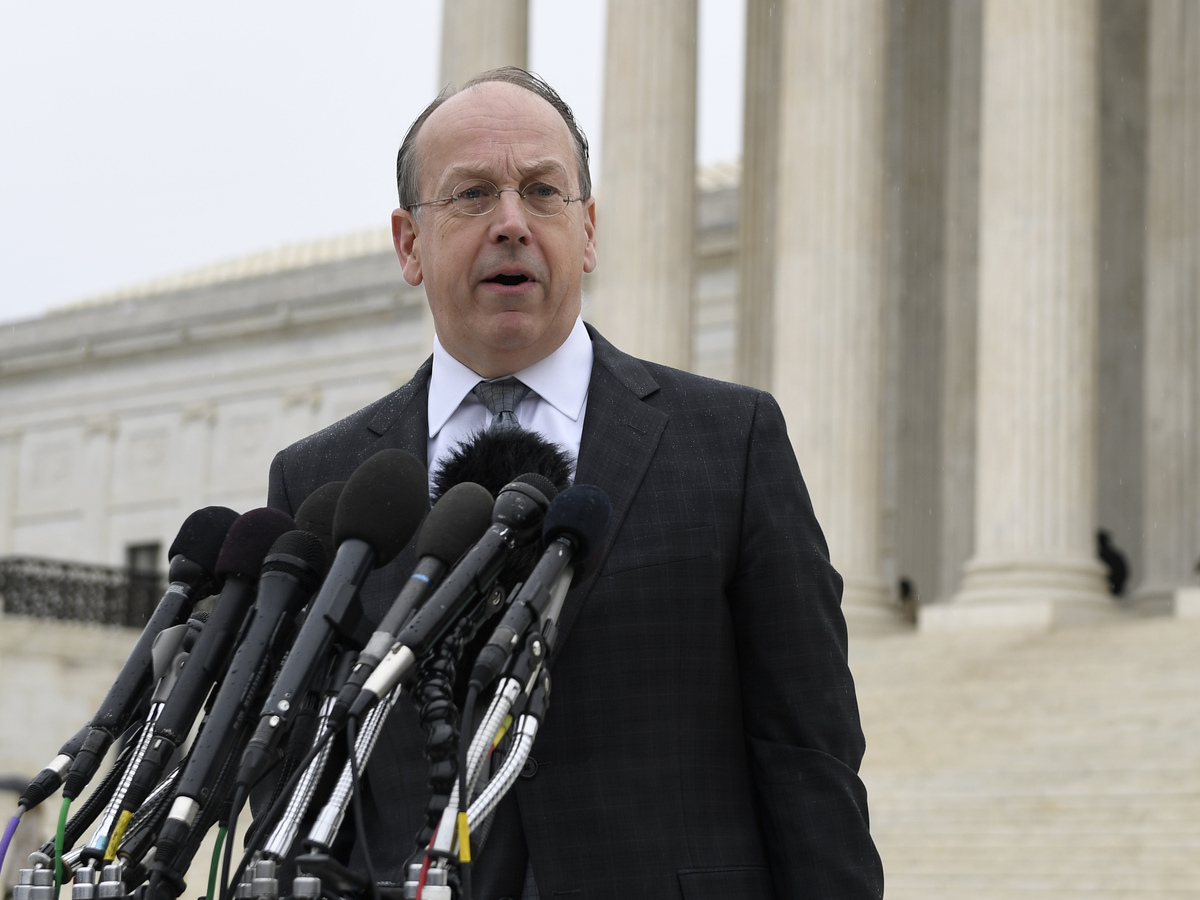 The Constitution says nothing about the president's power to remove officers who have been confirmed by the Senate, observes Clement.

And he points out that the CFPB's single-director structure is not unique among independent federal agencies. Among those with a single director are the Comptroller of the Currency and the Social Security Administration.

"The issue in this case is like the thread on the sweater that if you start tugging on it, and you tug on it hard enough, potentially, the whole sweater comes undone," he says. "The sweater here really is ... the whole alphabet soup of agencies that all have these for-cause protections."

"The Federal Reserve is a great example of why Congress imposes these kinds of restrictions," so as to protect some of our most important institutions from destabilizing political crosscurrents, Clement says.

The Trump administration, however, is willing to roll the dice. It argues that if a single-member agency cannot be distinguished from a multimember agency, the court should reverse the 85-year-old Humphrey decision, and all of the decisions that followed it.

That would throw into doubt not just the CFPB, but also independent agencies that make up roughly a third of the government — and, potentially, the rules and regulations that those agencies have laid down over the years.

The end of independent agencies?

Former CFPB Director Cordray cautions against that approach. He points out that even the Mortgage Bankers Association filed a brief in this case, saying, "Whatever you do, don't strike down the agency as a whole because it would cause chaos in the mortgage market. The rules that are in place, we've all adjusted to those, those are working well."

The Supreme Court majority likely would want to avoid a decision that causes chaos. But the conservative court majority is made up of five justices who, to one degree or another, have indicated a hostility to the notion of independent agencies. The question is, how far do they want to go?