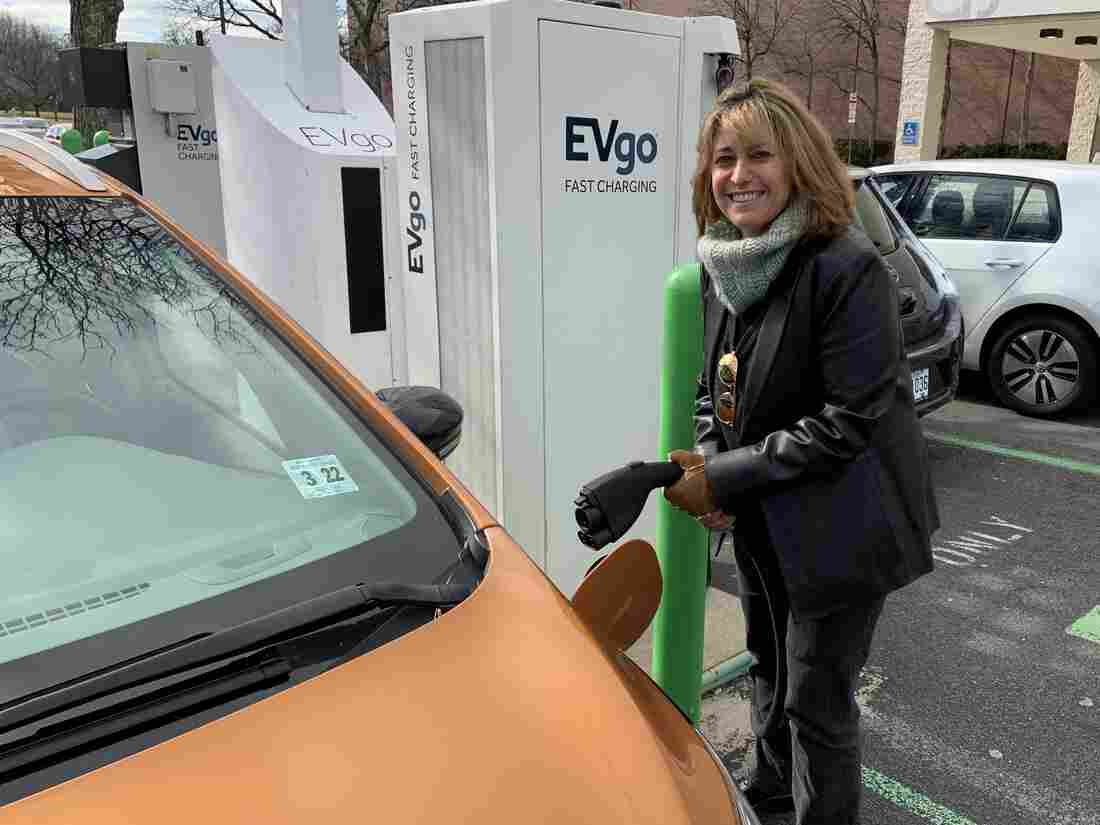 Pam Frank, CEO of ChargEVC, drives a bright Orange Chevrolet Bolt because she wants others to notice its an electric car. Jeff Brady/NPR hide caption 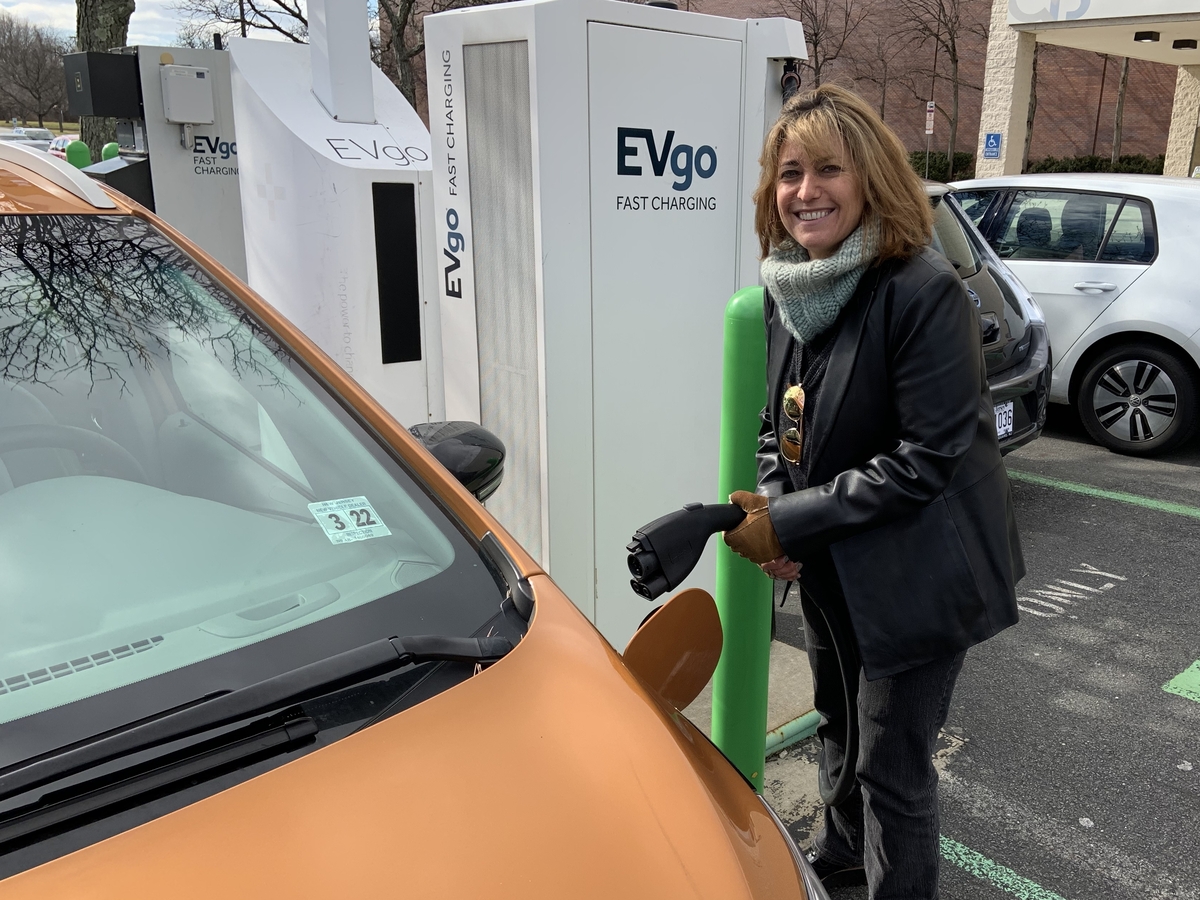 Pam Frank, CEO of ChargEVC, drives a bright Orange Chevrolet Bolt because she wants others to notice its an electric car.

As the federal government takes a back seat in promoting electric vehicles some states, such as New Jersey, are taking the wheel.

There are nearly 1.5 million electric vehicles on U.S. roads today, according to the Edison Electric Institute. EV boosters concerned about climate change want even more and they say governments should help speed the transition away from internal combustion cars.

New Jersey passed an ambitious law in January aimed at having 330,000 electric cars on state roads by the end of 2025. And by 2040 New Jersey wants 85% of cars sold in the state to be electric.

N.J. Gov. Phil Murphy says the law is part of his state's goal of reaching 100 percent clean energy by 2050.

The law includes up to $300 million in rebates over 10 years to electric vehicle buyers.

"And it's not just any old rebate. It's 'cash on the hood' rebate. You walk into a dealer, there's a car that's $35,000, that car's $30,000 to you," says Pam Frank, CEO of the group ChargEVC, which includes utilities, car dealers and environmental groups.

Frank is not just an advocate for EVs, she's an evangelist. That's why she drives a bright Orange Chevrolet Bolt.

"I wanted people to notice I was driving this electric machine, which I'm very proud of," Frank says. And if anyone asks she'll tell them it's fun to drive, it's fast, it reduces her carbon foot print and it's quiet.

Frank's group pushed for the new law, which also calls for charging stations to be built around the state to overcome "range anxiety," or the fear a car's battery will run out with no place to charge.

How Electric Cars Will Change Driving And The Economy

How Electric Cars Will Change Driving And The Economy

The New Jersey law along with incentives in states such as California, Oregon and Maryland, all come at an important time for utilities. After decades of steadily increasing electricity consumption, U.S. demand has leveled off, thanks in part to more efficient appliances and lighting.

If more EVs are on the road that means utilities will sell more electricity.

"New Jersey is an exciting one because outside of California it's probably the biggest piece of legislation that we've seen that's supportive of clean transportation," says Chris Budzynski, director of utility policy at Exelon.

And the law comes as a federal tax credit of up to $7,500 is starting to expire. The credits are available for only the first 200,000 cars a manufacturer sells. GM and Tesla already hit that ceiling.

The Trump administration helped block efforts to raise that limit last December. As a field, Democratic presidential candidates are much more supportive of EV subsidies. So if voters choose a new president next November more federal help may come. Until then Budzynski is pleased to see states taking action to speed the transition to electric cars.

"This does represent one of the most significant or more significant opportunities for us, probably, over the course of the last 100 years with the exception of the introduction of air conditioning," Budzynski says.

Not everyone is happy with this trend. Oil companies, especially those focused on refining, stand to lose gasoline sales if EVs take off.

They've opposed some state efforts, often echoing arguments from consumer advocates such as Stefanie Brand, director of the New Jersey Division of Rate Counsel. Her job is to defend utility customers' interests.

Often these state programs allow utilities to collect ratepayer money to build things such as charging stations. Brand says that's not fair because poor ratepayers are subsidizing wealthier ones who can afford an EV.

Electric car advocates point out everyone benefits from cleaner air and efforts to address climate change. And there are studies, including one focused on California — the state with the most EVs — showing a lot more electric cars on the road could actually reduce rates.

Brand says there's a catch though, "Until you reach a critical mass of electric vehicles, you're not going to see those effects."

For New Jersey's EV law, Brand says her concerns for poorer ratepayers were addressed. Money from a fund already dedicated to public benefits will be used for the EV rebates.

Still debates like this will continue as more states seek to boost electric vehicles. In fact, Pam Frank plans to take her orange Bolt and her coalition to neighboring states in the Northeast very soon.