Accessibility links
A Global Struggle For Democracy Is Lacking Leadership The annual survey of the state of global freedom includes the world's two biggest democracies — India and the U.S. — among nations where freedom is declining. 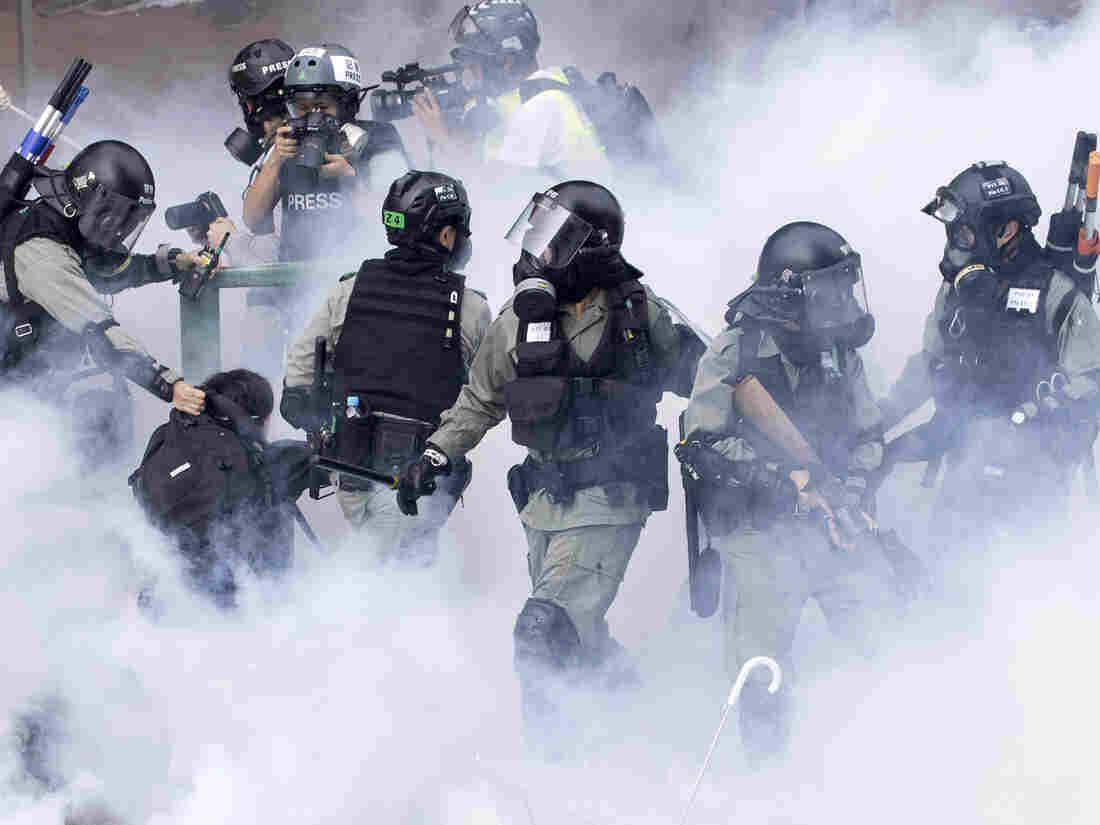 Police in riot gear move through a cloud of smoke as they detain a protester, in November. Freedom House cited the willingness of people in Hong Kong to protest as encouraging. Ng Han Guan/AP hide caption 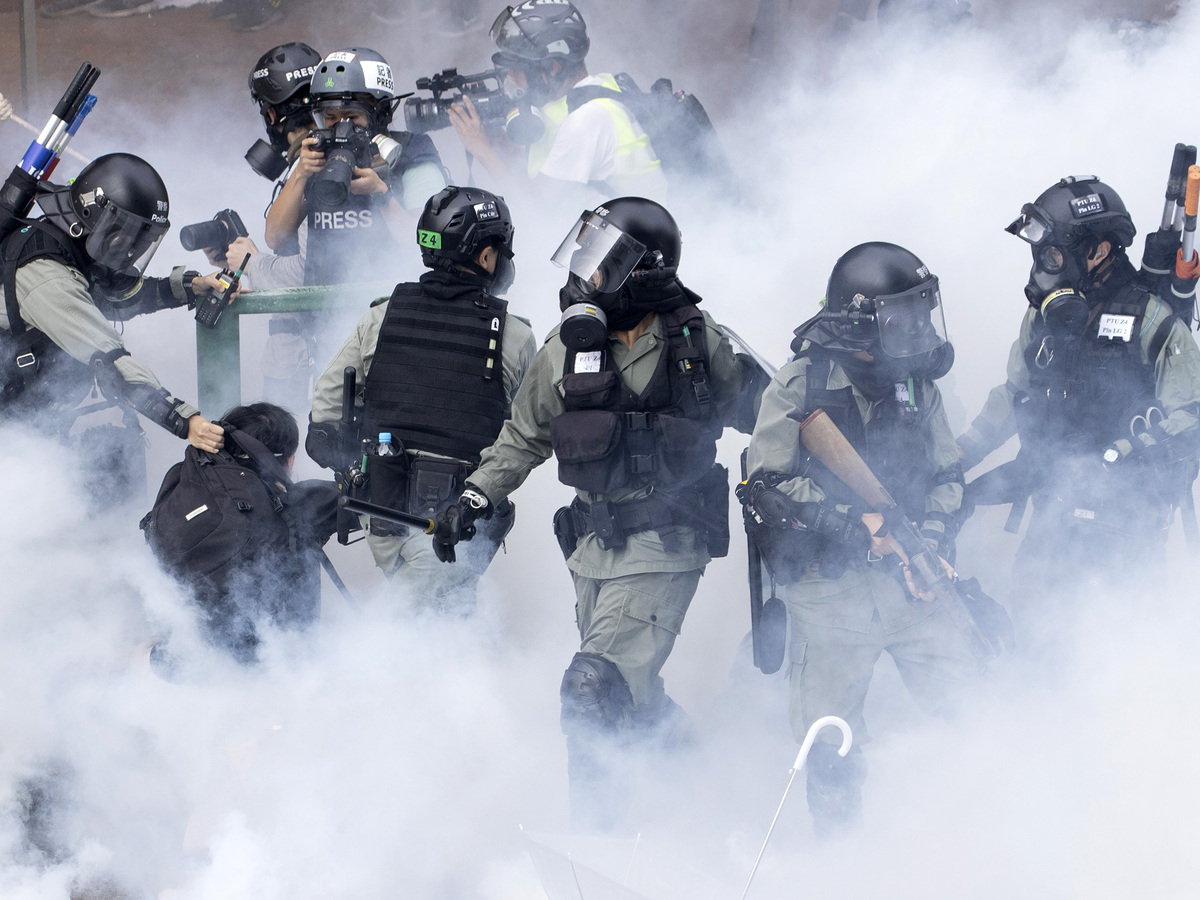 Police in riot gear move through a cloud of smoke as they detain a protester, in November. Freedom House cited the willingness of people in Hong Kong to protest as encouraging.

For nearly a half century, Freedom House — the avowedly non-partisan democracy advocacy organization whose founders include Eleanor Roosevelt and Wendell Wilkie — has published an annual report on the state of freedom in the world. This year's edition, titled "A Leaderless Struggle for Democracy," is just out, and it is decidedly downbeat in its assessment of where worldwide freedom stands today. 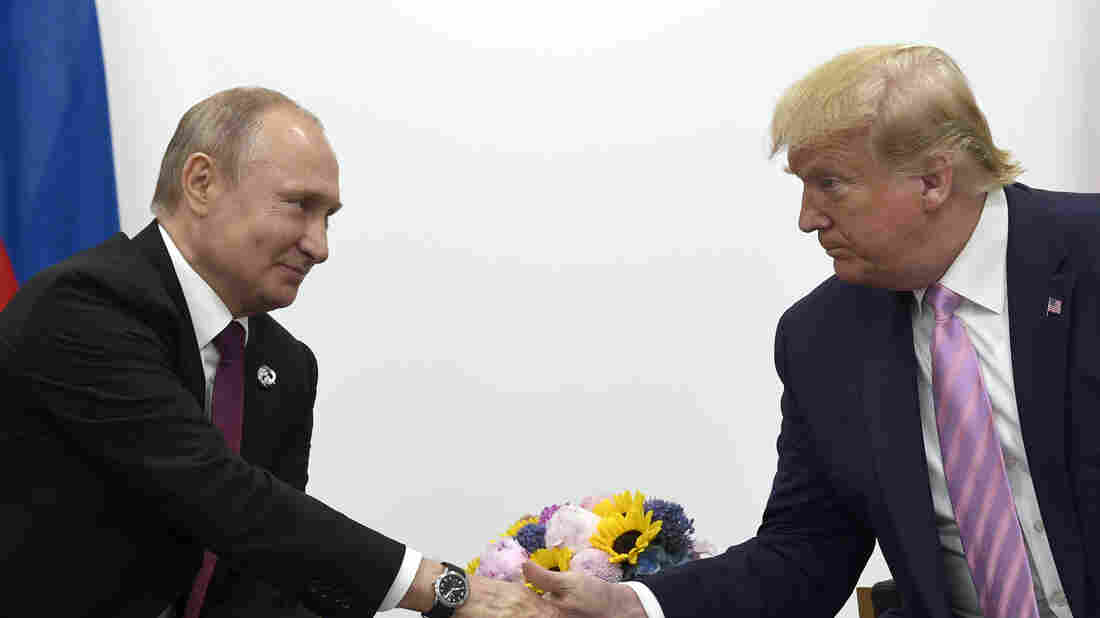 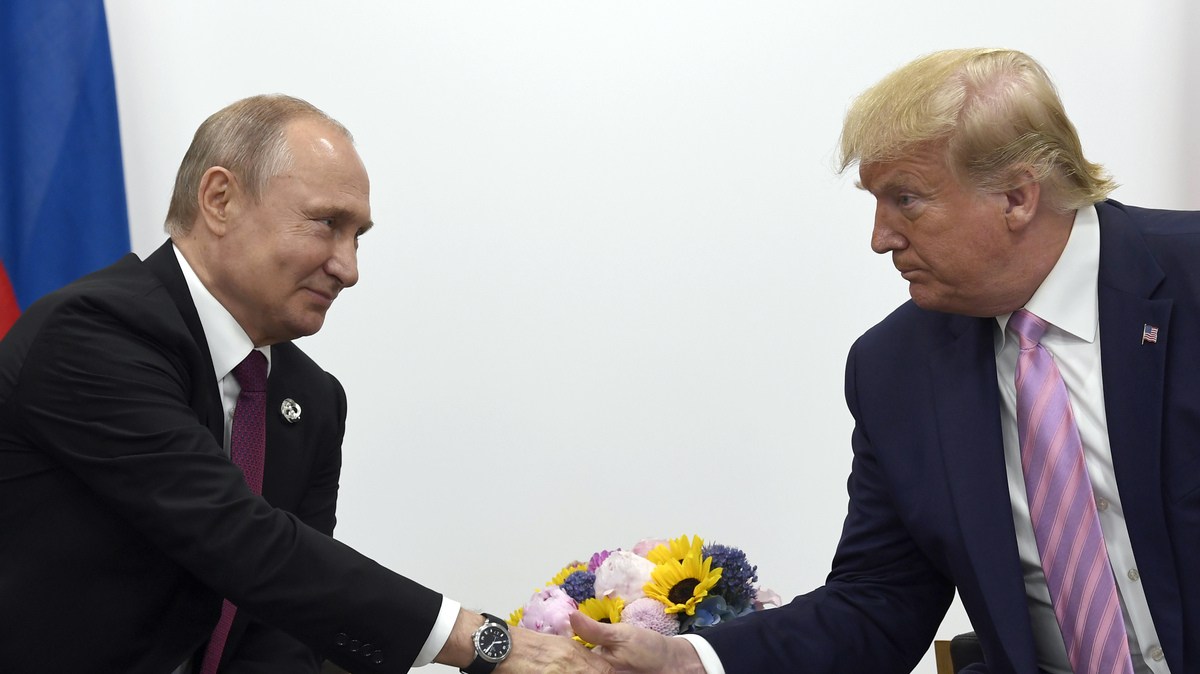 "Democracy and pluralism are under assault," writes the report's author, Sarah Repucci. "The unchecked brutality of autocratic regimes and the ethical decay of democratic powers are combining to make the world increasingly hostile to fresh demands for better governance."

In its survey of the state of freedom in 195 nations and 15 territories over the past year, Freedom House finds little to cheer about. 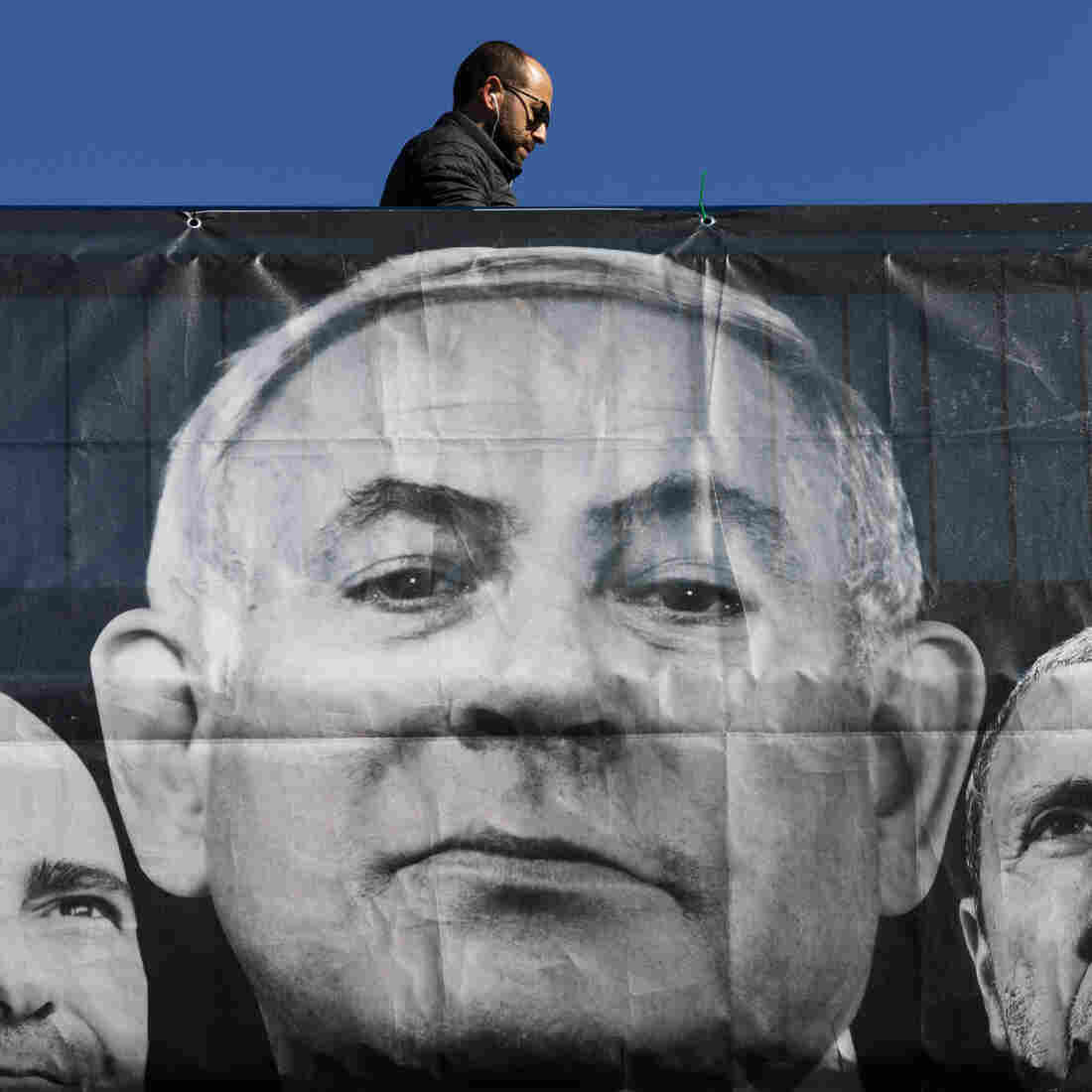 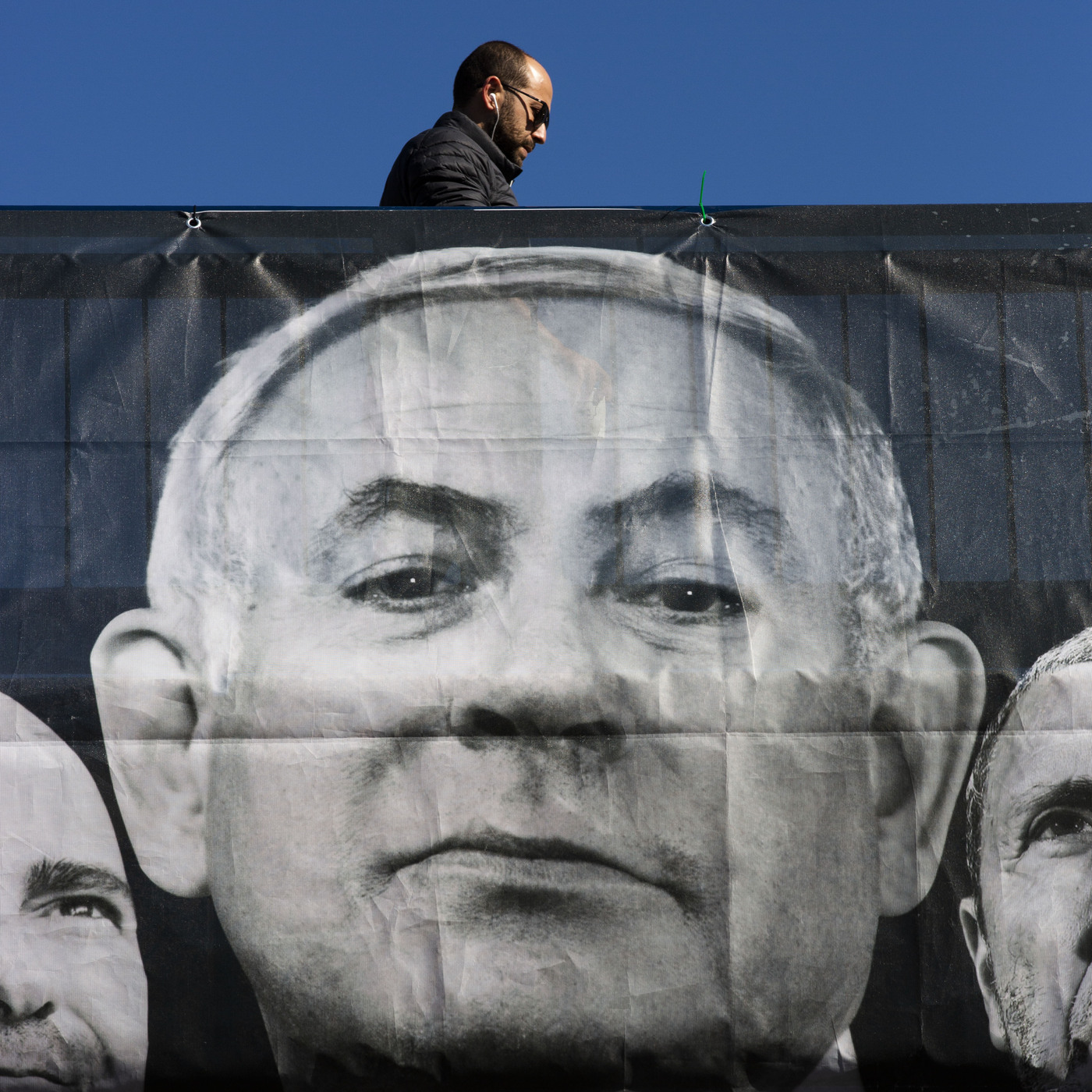 "This year's report is deeply concerning, in that it finds that we are in the 14th year of a global recession in democracy," says Freedom House president Michael Abramowitz. "Almost twice as many countries declined in their scores this year as improved, and those declines aren't just happening in places that you expect, like China or Russia, but also in established democracies."

Reporter's Notebook: Uighurs Held For 'Extremist Thoughts' They Didn't Know They Had

Twenty five of the 41 "established democracies" identified by Freedom House saw net losses in democracy since 2006. "The most common areas of decline," says Repucci, "took place in functioning of government, freedom of expression and belief, and rule of law."

A decade ago, Freedom House rated freedom in the United States on a par with nations such as Switzerland and the United Kingdom. In its latest report, the U.S. ranking has dropped 8 points, behind Slovakia and Mauritius and just ahead of Argentina and Croatia.

Much of the blame for the slide in the U.S. standing gets placed on President Trump.

"The Trump administration has failed to exhibit consistent commitment to a foreign policy based on the principles of democracy and human rights," the report states. "[Trump] has also given a pass to tyrannical leaders whom he hopes to woo diplomatically, including Vladimir Putin of Russia and Kim Jong-un of North Korea."

"Fierce rhetorical attacks on the press, the rule of law, and other pillars of democracy coming from American leaders, including the president himself," are also noted by Freedom House, which relies on federal funding for most of its $38 million annual budget.

"An ongoing decline in fair and equal treatment of refugees and asylum seekers," the report adds, "is also particularly worrisome for a country that takes pride in its traditional role as a beacon for the oppressed."

The report is also unsparing in its appraisal of India, identifying "alarming setbacks in the world's largest democracy." While Freedom House continues to count India among the 43 percent of the world's nations it considers "free," it warns that through discriminatory actions against the Muslim minority and a crackdown on the country's Muslim-majority region of Kashmir, Prime Minister Narendra Modi's Bharatiya Janata Party "has distanced itself from the country's founding commitment to pluralism and individual rights."

Both Trump and Modi are described as part of a larger "drift from the ideals of liberal democracy" in which "freely elected leaders distance themselves from traditional elites and political norms, claim to speak for a more authentic popular base, and use the ensuing confrontations to justify extreme policies — against minorities and pluralism in particular."

Among such leaders cited: Israeli Prime Minister Benjamin Netanyahu. "He has countenanced no criticism, denouncing his perceived enemies in the parliament, civil society, the media, and law enforcement agencies," the report notes, pointing out that things came to a head last year, "when he was indicted on three separate corruption charges, refused to step down, and actively sought immunity even as he ran for re-election."

Forty nine nations are listed as "not free" in the report, with Syria ranking dead last among the 10 nations identified as the "worst of the worst." Others earning that dubious distinction include Eritrea, North Korea, Saudi Arabia, and Somalia.

Among the nations ranked "not free" is China. Beijing is accused of mass violations of basic freedoms of Uighurs and other Muslim minorities in the autonomous region of Xinjiang, which is described in the report as "a dystopian open-air prison."

Russia is also labeled "not free," although the description of its suppression of political opposition is limited to a scant two sentences in the 33-page report.

Other large nations, among them Brazil and Mexico, are not even mentioned.

The Freedom House report comes on the heels of another global survey on the health of democracy by the Pew Research Center.

"Democracy remains a popular idea among average citizens," the Pew 34-nation survey reports, "but commitment to democratic ideals is not always strong."

Unlike the Freedom House report, which ranks countries' degrees of freedom based on an array of indicators, the Pew study actually polled citizens last year on their attitudes toward democracy and elected leaders.

A fair judiciary and gender equality were the two highest ranked attributes for a democracy among the 38,426 persons polled; the ability of human rights groups and political parties to operate freely ranked the lowest.

"The protests show that people want to be free," the former Washington Post White House correspondent says. "But we have to also acknowledge that these movements frequently run up against deeply entrenched interests, and thus far, we have not seen a material improvement in global freedom."