Accessibility links
Coronavirus Fears Lead To Canceled Flights And Concerns Within The Travel Industry Companies are canceling employee travel, and airlines are slashing hundreds of flights amid fear of the spreading coronavirus. The slump is hitting the travel industry and related businesses hard.

Listen · 4:12 4:12
Coronavirus Fears Lead To Canceled Flights And Concerns Within The Travel Industry 4:12 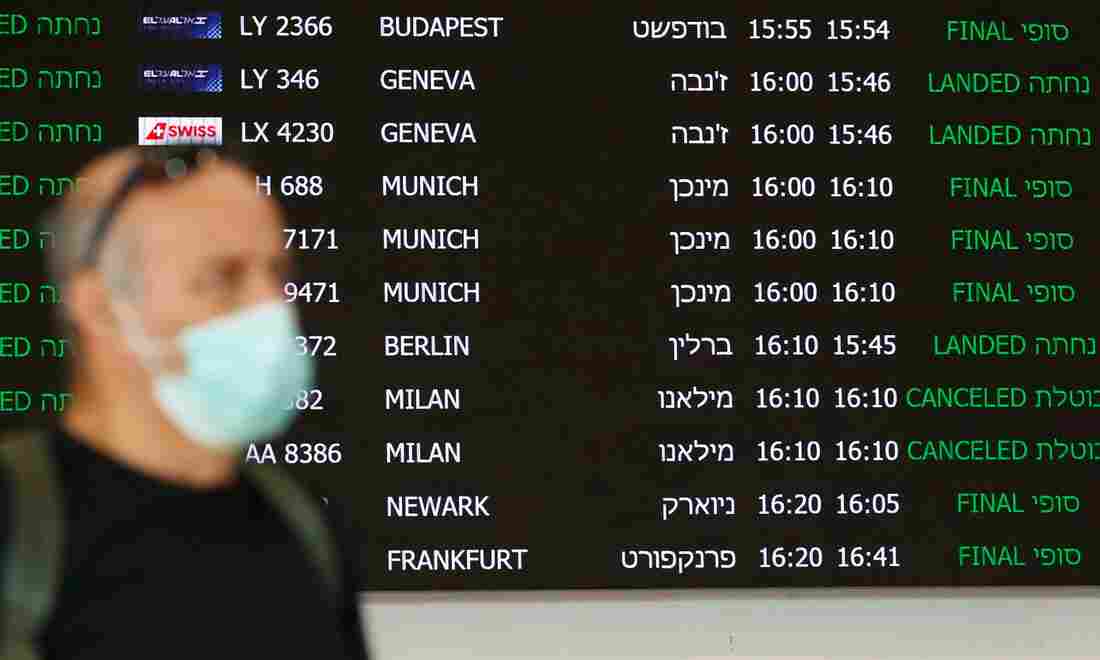 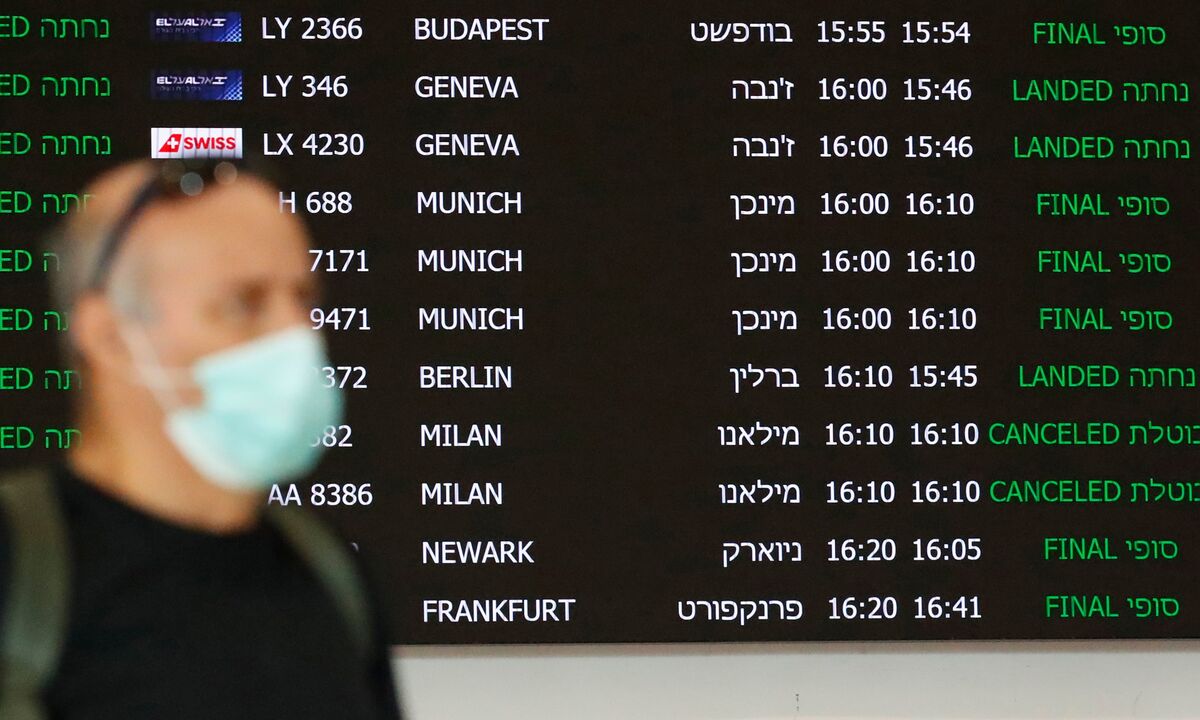 A flight information board displays canceled incoming flights from Italy at Ben Gurion Airport, near Tel Aviv, Israel, last month. Airlines are slashing hundreds of flights amid fear of the spreading coronavirus.

Across the country and around the world, flights are being canceled, trade shows are being called off and businesses are cutting back on employee travel — all because of fears related to the spread of the new coronavirus.

The sudden and unforeseen slowdown could cost the travel industry billions of dollars.

The Global Business Travel Association estimates that if coronavirus-related travel restrictions continue, whether the travel cutbacks are self-imposed or ordered by governments, spending on travel around the world could drop by more than 37%, costing the industry a whopping $46.6 billion a month and nearly $560 billion in a year.

"The last time we saw anything like this was 9/11," says Scott Solombrino, the organization's executive director. "But that was a complete shutdown of travel. Thank God we're nowhere near that."

But if coronavirus fears continue to lead corporations to pull sales staff, consultants and other employees off the road and if leisure travelers cancel weekend getaways and destination vacations, the economic cost could be staggering.

Airlines in particular are already feeling deep pain. Several airlines are revising their financial outlook for the year, and it now may be difficult to turn a profit.

"Right now, across the Pacific especially, it's a bit of a mess for airlines," says Joe Schwieterman, a transportation professor at DePaul University in Chicago, who notes that airlines with routes to Asia, and China in particular, are seeing business screech to a near halt. And travel to Europe, the Middle East and other global destinations is starting to slump too.

And while there haven't been layoffs yet, pilots, flight attendants and other airline workers could lose pay as flight schedules are pared back and planes sit on the ground, as even domestic travel is slowing significantly.

"We're seeing buyer apprehension," Schwieterman says, as the uncertainty of where the coronavirus may spread is leading travelers to hold off on booking "even cruises, summer trips. People are hedging their bets."

The travel industry is being hurt further by the cancellation of big trade shows, conferences and conventions, including an energy summit in Houston that was expected to draw 4,000 people, a physics conference in Denver this week that expected to bring 10,000 people to that city, and the International Housewares Association's huge annual Inspired Home Show in Chicago, which was expected to bring in nearly 60,000 people March 14 to 17. The city's tourism agency, Choose Chicago, projected that the trade show would've been a $92 million boost to the local economy.

"These big shows are lifebloods for the big cities," Schwieterman says, as the convention business often fills local hotels and restaurants. "You take that away, and there are a lot places that are financially on the edge right now and it's going to create some severe pain."

But that pain, to some degree, is unwarranted, says Solombrino, of the Global Business Travel Association, noting that many people are abandoning travel plans unnecessarily. He says it's certainly appropriate to limit or halt travel to China, some other parts of Asia and a few other destinations around the world.

"But in the United States, there are no travel restrictions that have been put in place on anybody by the federal government or a state government," he says, adding that there are also no restrictions on travel to Latin and South America, most of Europe and many other places.

"So what we're trying to tell people and message people is that, 'Look, travel is still safe,' " Solombrino says. "Take the normal precautions you would take: Wash your hands, don't be coughing on people, you know, try to be diligent while you're traveling. But we don't see any reason why people wouldn't be traveling, certainly domestically."

Nonetheless, the media coverage of the spreading coronavirus both in the U.S. and abroad has travelers worked up.

"Everyone's freaking out, [saying] 'Oh my God, I gotta cancel my plans, my trip, my this, my that,' " says Tammy Levent, CEO of Elite Travel. Worried clients have her phone ringing off the hook and her email inbox overflowing.

Levent says she and many of her fellow travel professionals spend a lot of time educating their clients about the coronavirus and the relatively small risk to most travelers. Levent has been able to talk most clients out of canceling their plans.

"I've had one cancellation in all of our thousands of clients, which was to Japan."

Many airlines are offering more flexible flight-change and cancellation policies, even waiving the often hefty fees for changing or canceling a flight booked to certain destinations that are considered at higher risk.

United Airlines, for example, just announced that it is waiving change fees for any bookings — domestic and international — made between now and March 31, in an effort to spur travel or at least cut its losses.

But Levent warns that those trying to cancel or change flights to destinations where there are no travel restrictions will likely have to pay the full penalty if they do cancel and that regular travel insurance may not help. Only "cancel for any reason" policies will allow you to get your money back.

Still, many of those who are flying this week don't seem too worried.

Arriving in Los Angeles from Cologne, Germany, Adrian Schmetz, 34, says he thinks the media is overhyping the coronavirus danger.

"It's not as lethal as it's made to look like at the moment," Schmetz says. "It's not going to affect my choice of travel at all."

But Los Angeles International Airport parking attendant Myla Maramba says business there is already slowing down, and she worries that a bigger travel slump could lead to a cut in hours or layoffs.

"It's going to affect a lot of people's livelihoods," she says.

And that's certainly true as the tentacles of the travel economy reach into the pockets of millions around the world.