Accessibility links
Senate Passes Roughly $8 Billion Bill To Battle Coronavirus Outbreak The emergency funding deal is the result of bipartisan negotiations in both the House and the Senate. The measure is expected to be sent to the president's desk soon. 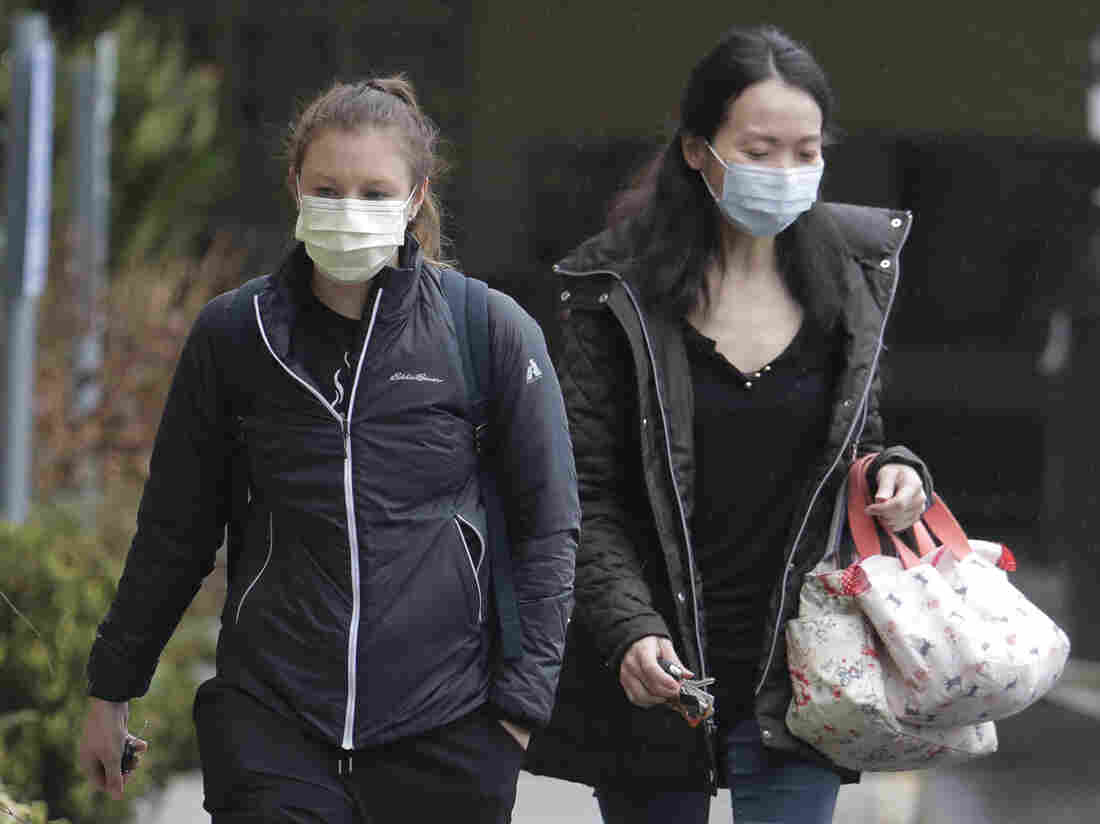 Two women wearing masks walk away from the Life Care Center in Kirkland, Wash., near Seattle. An outbreak of the coronavirus is cited as the cause for the deaths of at least two residents at the center. Ted S. Warren/AP hide caption 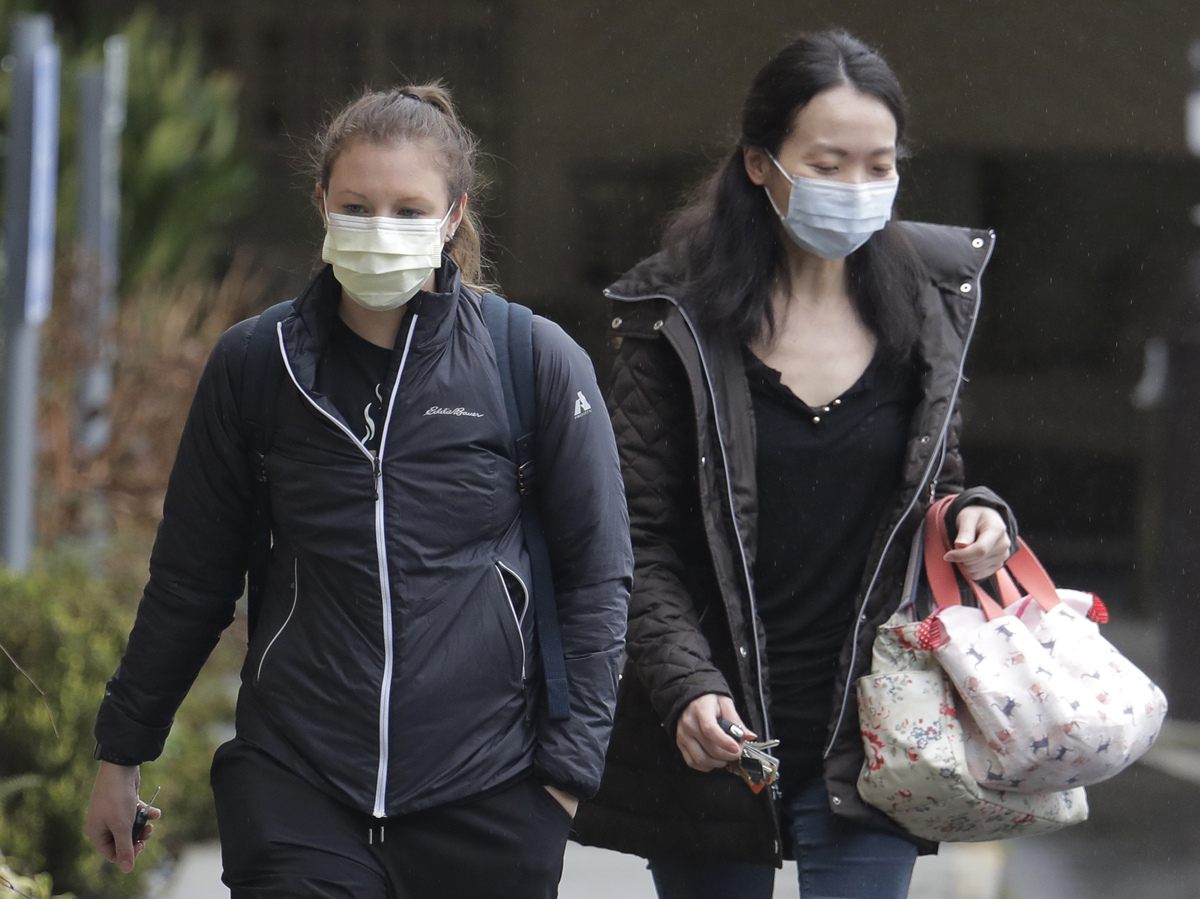 Two women wearing masks walk away from the Life Care Center in Kirkland, Wash., near Seattle. An outbreak of the coronavirus is cited as the cause for the deaths of at least two residents at the center.

President Trump is expected to sign an $8 billion emergency spending package into law Friday, responding to growing cases linked to the coronavirus illness domestically and abroad.

Visiting Olympia, Wash. on Thursday, Vice President Mike Pence praised Congress' bipartisan response, and said some of the funds would be available for state and local response.

The Senate overwhelmingly passed the package Thursday with a 96-1 vote — Kentucky Republican Sen. Rand Paul opposed the bill. He proposed an amendment that offset some of the costs of the legislation with cuts elsewhere, but that effort failed.

A bipartisan group of members and staff for the appropriations panels in both the House and Senate unveiled the legislation on Wednesday after several days of talks. They released details of the plan, which will boost funding for testing of the virus and lower costs for related medical treatments.

Although partisan disagreements on providing affordable access to treatment slowed down negotiations in recent days, members said putting politics aside finally provided the breakthrough they needed to reach a deal.

"This should not be about politics, this is about doing our jobs to protect the American people from a potential pandemic," Alabama Republican Sen. Richard Shelby, chairman of the Senate Appropriations Committee, said in a statement. "We worked together to craft an aggressive and comprehensive response that provides the resources the experts say they need to combat this crisis. I thank my colleagues for their cooperation and appreciate President Trump's eagerness to sign this legislation and get the funding out the door without delay."

The funding plan is significantly larger than the initial request from Trump to allocate $2.5 billion to efforts to fight the coronavirus disease. Both Democrats and Republicans said more was needed to address the growing outbreak.

"As the number of confirmed cases of coronavirus in the United States continues to grow, Congress is taking swift action this week to provide our health experts, hospital, health care providers and state and local governments the funding they need," Senate Minority Leader Chuck Schumer said on the Senate floor ahead of the deal announcement.

The Senate Appropriations Committee's summary of the funding plan indicates that 85% of it will go to address coronavirus concerns domestically. The money is designated for coronavirus prevention, preparation and response efforts, the panel said.

The plan includes almost $7.8 billion in new funding combat the spread of the virus at the local, state, national and international levels, according to details from the panel.

The agreement also includes a provision to allow Medicare beneficiaries to access telehealth programs that will let them remotely see providers to assess symptoms potentially tied to the coronavirus.

"To protect public health, the bill will allow Medicare providers to extend telemedicine services to seniors regardless of where they live, at an estimated cost of $500 million," House Speaker Nancy Pelosi said in a written statement.

The bill also allocates more $300 million to ensure that when a vaccine is developed — which some estimate could be a year or more away — that Americans will be able to access it regardless of their ability to pay, according to a congressional aide involved in the negotiators.

Overall, the plan allocates nearly $6.5 billion to the Department of Health and Human Services, which includes $2.2 billion for the Centers For Disease Control and Prevention to address state and local preparedness. The HHS figure also includes $3.1 billion to pay for new medical supplies such as masks at the Strategic National Stockpile and research into vaccines and therapeutics.

The funding agreement come as fears are rising of coronavirus spreading in the United States, with reports of more than 80 related infections across the country and 11 deaths — one in California and the rest in Washington state. This is as the illness continues to see dramatic spread around the world, with more than 90,000 cases worldwide and more than 3,000 have died.

"The American people are counting on our government for a fully-funded, coordinated, and comprehensive government-wide response to the coronavirus," Rep. Nita Lowey, D-N.Y., who chairs the House Appropriations Committee, said in a statement.

When It Comes To Possible Coronavirus Outbreak, Prepare But Don't Panic

"House Democrats' emergency supplemental consists of robust, entirely new funding and strong transparency and accountability measures to fully address the virus and keep Americans safe from this growing public health emergency. We must quickly enact this legislation — lives are at stake."

Lowey's panel's outline stressed that the plan includes $950 million for state and local agencies to track the illness among infected patients, laboratory testing and mitigation.

It also noted that the measure includes $435 million to support health systems overseas to prevent, prepare and respond to the coronavirus, plus $300 million to respond to humanitarian needs. It also provides an estimated $7 billion in low-interest loans to affected small businesses.

The measure also includes a provision that was a high priority among Democrats: ensuring the funds can only be used to address the coronavirus and other infectious diseases. Democratic leaders raised concerns that the Trump administration would use the funds for other purposes.

"The way to secure these urgently-needed resources with speed and certainty was to forgo partisan posturing, forgo micromanagement at the leadership level, and let bipartisan appropriators do their work," McConnell said shortly before the details were announced.