Accessibility links
'There's Nothing Left': Satellite Images Show Razed Villages In Idlib, Syria New images show the scale of the destruction in the rebel stronghold of Idlib, where the United Nations says nearly a million people have been displaced in the last three months. 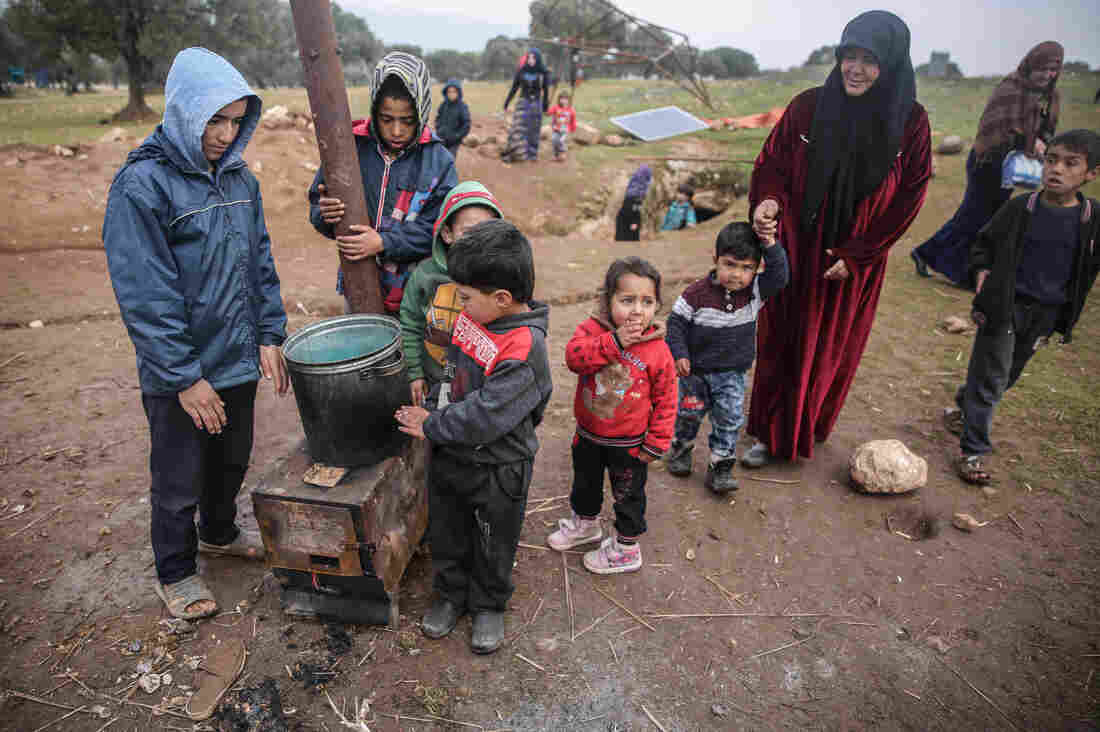 Nearly one million people have been displaced since December in Idlib as a result of the military campaign against the western countryside and the advancement of the Syrian regime. Anas Alkharboutli/dpa/picture alliance via Getty hide caption

In Idlib, the last rebel stronghold in Syria's nearly decade-long civil war, airstrikes have razed villages to the ground and displaced populations are being forced into smaller and smaller areas, as their camps balloon and overtake farmland, according to newly revealed satellite imagery.

The province has come under attack from Syrian and Russian forces in an offensive that began last year.

New images released by Save the Children and World Vision show the scale of the destruction in the northwestern province, where the United Nations says nearly a million people have been displaced in the last three months – most of them women and children.

The sheer level of destruction in Idlib means that displaced people have little to come back to when the fighting eventually stops, humanitarian workers say. 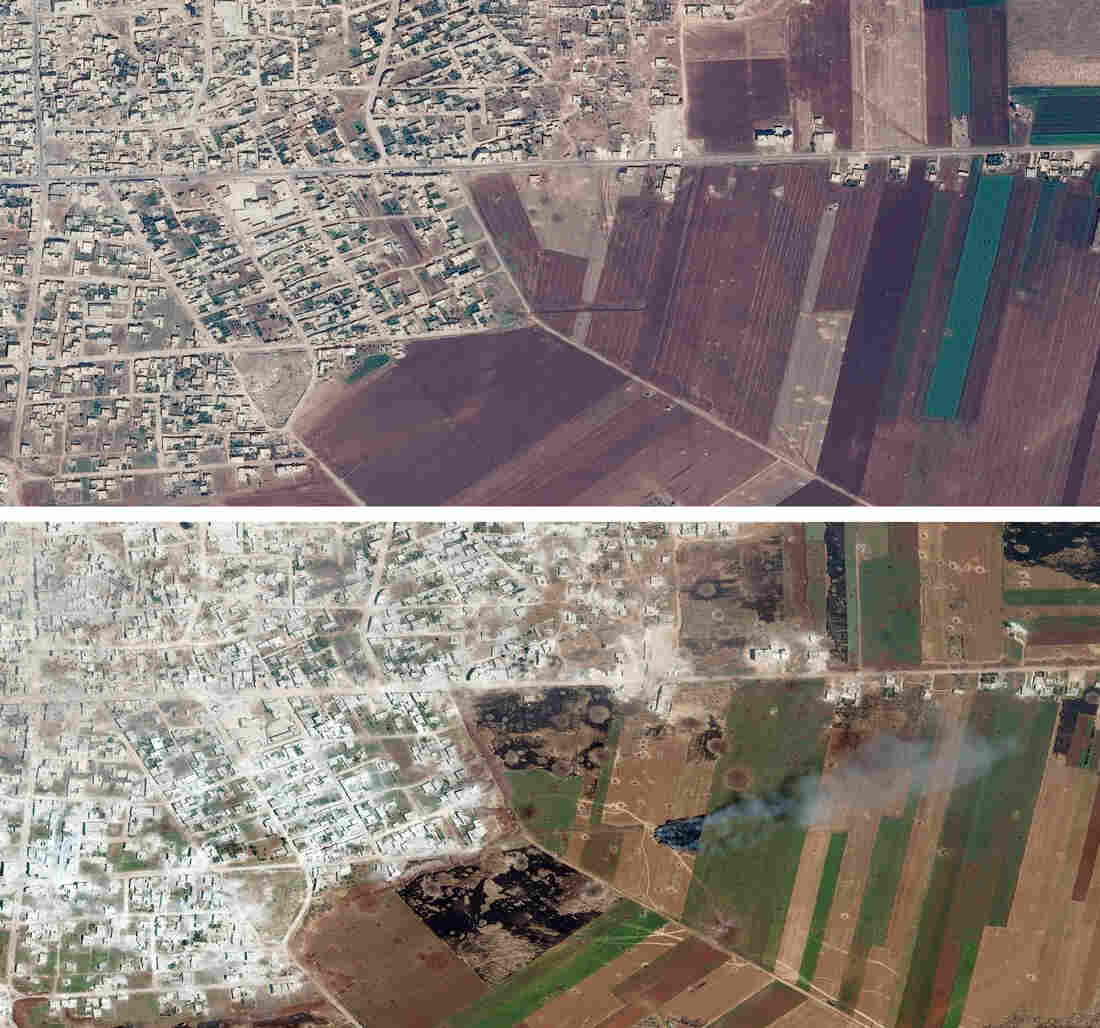 Satellite images released by Save the Children show an undisclosed area in Idlib province in July 2018 (top), and after apparent aerial bombardment in May 2019. Digital Globe hide caption

"How much damage there is in a single area makes it very difficult for people to be able to return to it," says Amjad Yamin, Save the Children's Syria Response spokesperson. "I don't know what they can go back to — when you see an entire village, there's nothing left. There's no civilian infrastructure. There are no schools left. No hospitals."

"We're looking at three million people now who live in an area that doesn't have the infrastructure that can support them," says Yamin.

The images were released on the eve of talks on the Syria crisis between Turkish and Russian leaders. Turkey is seeking a cease-fire in the area, and Russia is backing the regime of Syrian President Bashar Assad.

For years, civilians fleeing violence in other parts of Syria have come to Idlib. The area had about 1.5 million people when the war started nine years ago, and now has about 3 million, Yamin said. But they have come under fire in a Syrian government offensive that started in April 2019, as Assad's government attempts to defeat its opponents after taking back control of many other areas of the country.

These civilians are unable to cross into neighboring Turkey, which has closed its border. Yamin says his organization has met families who've fled violence many times as the fighting and airstrikes have shifted focus.

Some of the children displaced in Idlib have died from the cold, the U.N. says, and at least 100 civilians were killed by air and ground strikes last month.

The satellite images show rapid growth of camps for the displaced populations. For example, in the images analyzed by the Harvard Humanitarian Initiative, a photo from September 2017 shows a small camp on the edge of a large empty space and agricultural field. 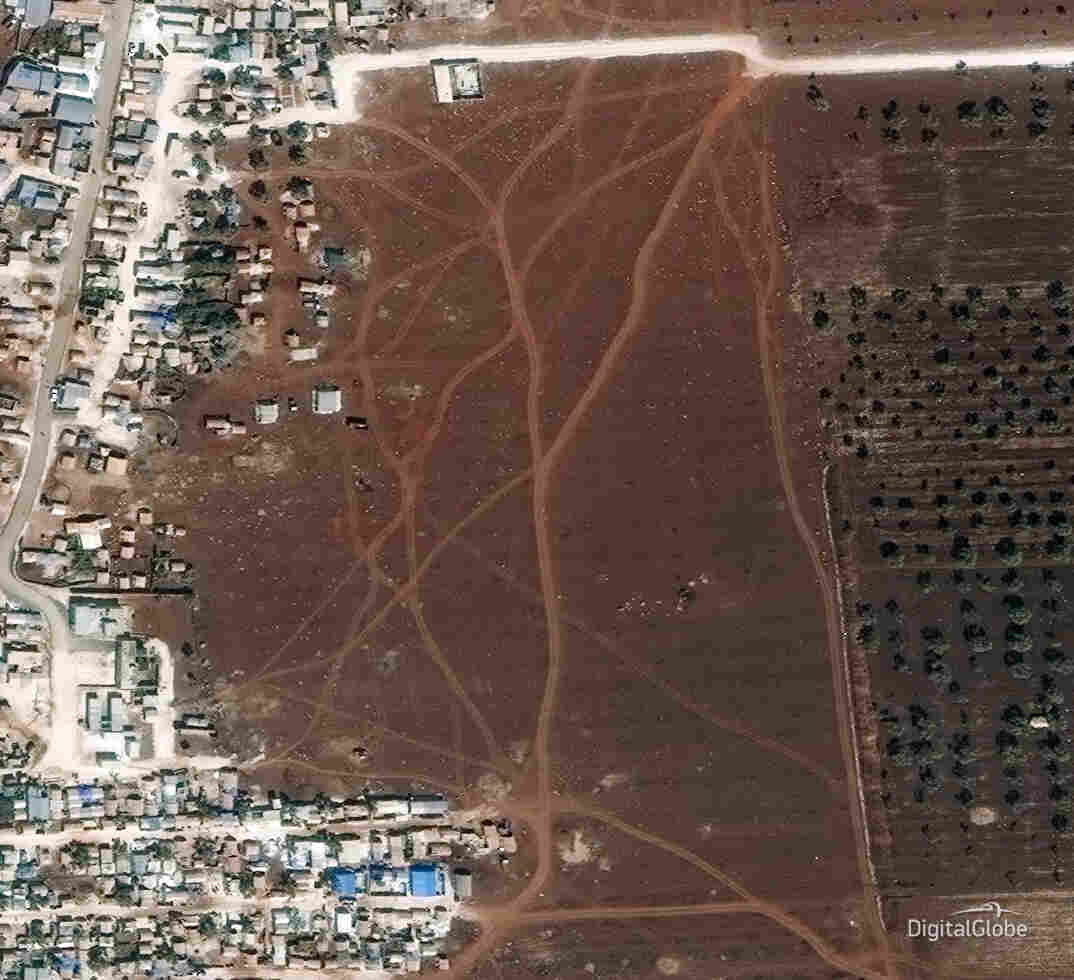 In September 2018, the satellite image shows previously empty space filled with small structures, in what the researchers say is likely a "self-settled and spontaneous camp." 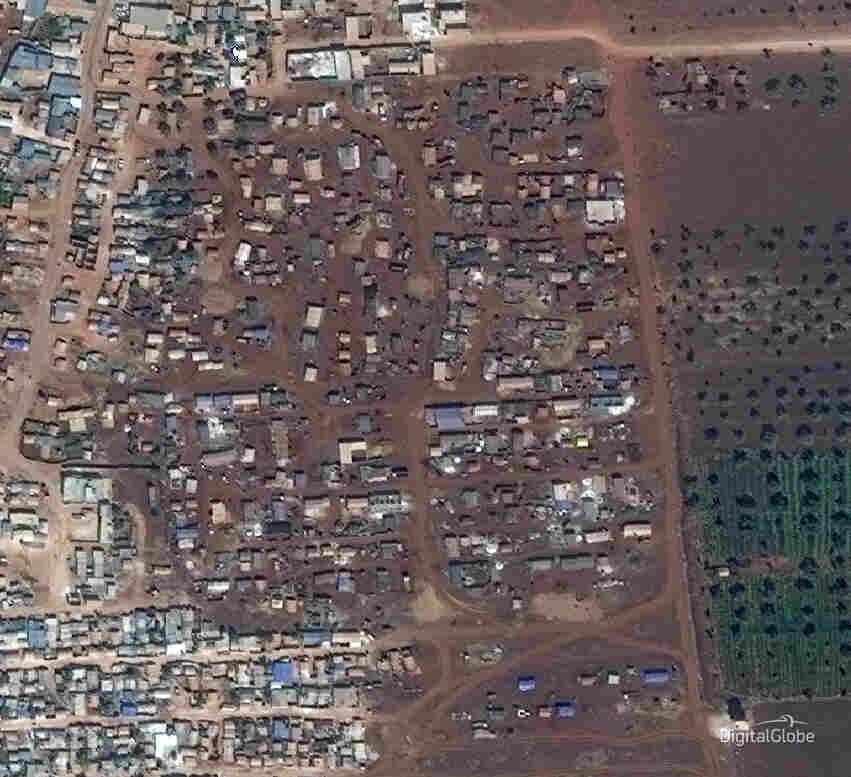 Finally, in December 2019, the structures nearly fill the area. They're sturdier than the ones there the previous year, and the camp is much denser than it used to be. The structures extend to areas that had been used to grow crops. 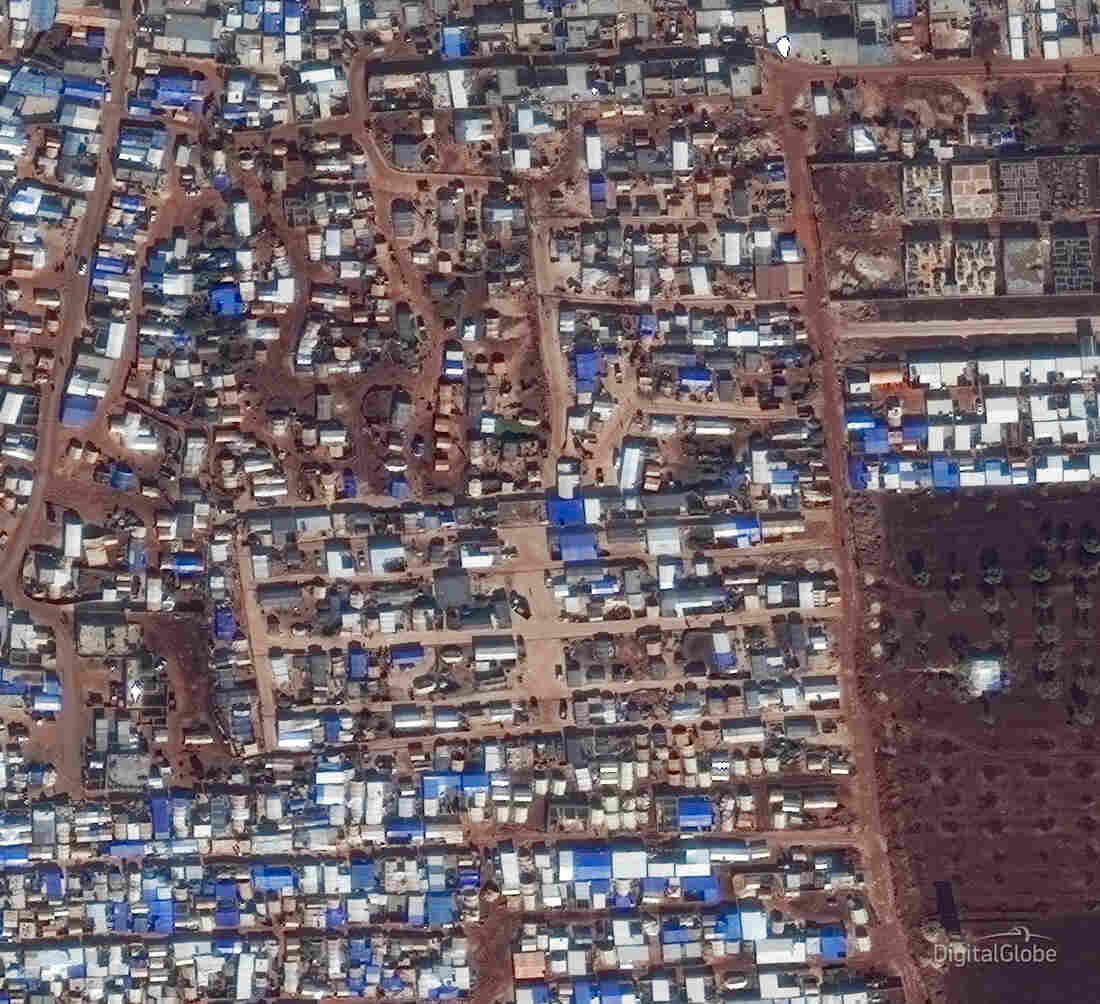 By December 2019, this camp had expanded and had grown more densely occupied. Digital Globe hide caption

Save the Children says that the area of this particular camp doubled between September 2017 and December 2019. The relief organization did not disclose the exact locations of the images out of concern for the safety of the people on the ground.

"Quite simply, it is a large-scale humanitarian catastrophe," Kelly Clements, the U.N.'s Deputy High Commissioner for Refugees, tells NPR's All Things Considered.

"We want to access, we want to bring in more relief, and it's quite difficult," she says. "Access is tremendously difficult to achieve." The situation is dangerous for aid workers, many of whom are from this area and have been displaced themselves by the violence. 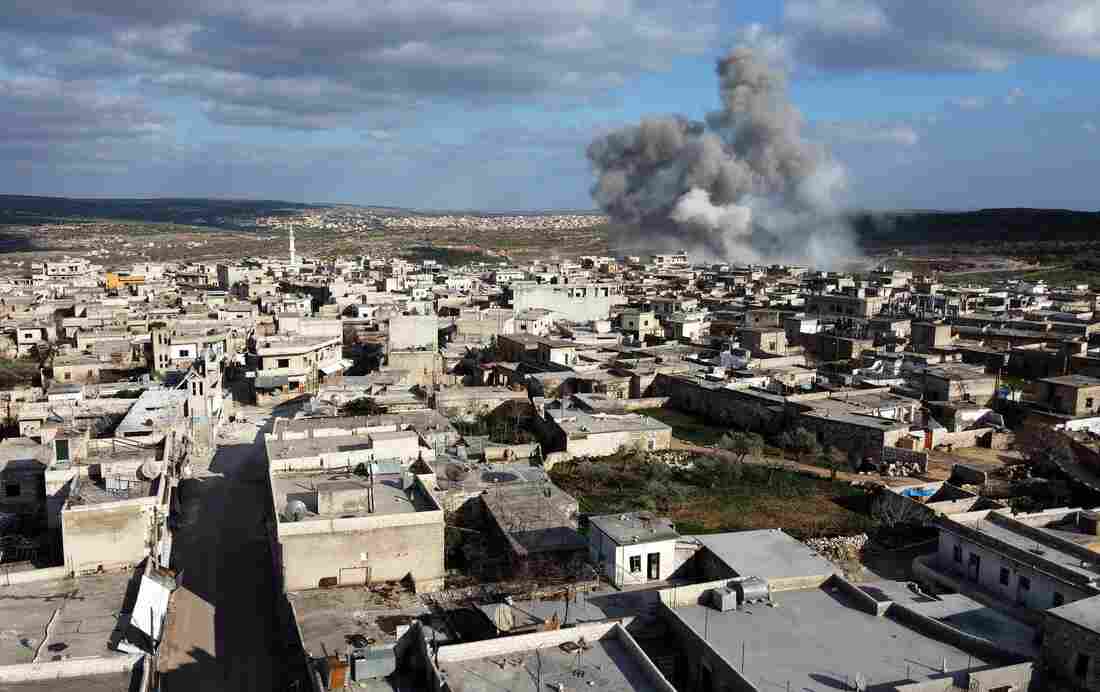 This picture taken on on March 2, 2020 shows smoke plumes rising following aerial bombardment on the village of Balyun in the southern part of Syria's northwestern province of Idlib. Omar Haj Kadour/AFP via Getty Images hide caption

Clements says that humanitarian relief simply provides a "band-aid" – and what is needed is a "political and diplomatic solution." She adds that "an immediate ceasefire is necessary – this is what is going to save the lives of babies that are dying today."

Earlier this week, the U.S. promised more than $100 million to support humanitarian assistance for the Syrian people. Clements say that money is critical, but they "need much more from the international organizations as well as donors to be able to support these efforts."

The U.N. issued a plan last month for northwest Syria seeking half a billion dollars, on top of a previous $2 billion plan for inside Syria to continue ongoing protection and lifesaving assistance, Clements says. To date, that plan is only 9% funded by the international community.