Accessibility links
Review: 'Writers & Lovers,' By Lily King Lily King's latest novel — about a young woman choosing between two loves while trying to live a creative life — proves literature doesn't have to be groundbreaking to be absolutely compelling. 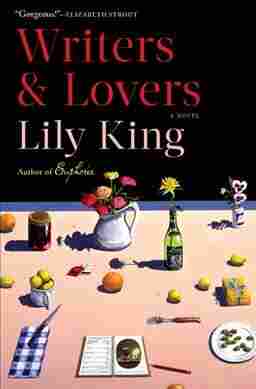 Lily King's new novel, her fifth, won't transport you to an exotic locale the way her last one did, but oh my, it's a good read. After Euphoria (2014), a richly researched and imagined tragic love triangle inspired by anthropologist Margaret Mead's life, King returns to her comfort zone: a distressed young woman finding her way in late 20th century New England.

Set in 1997 — two years before the publication of King's first novel, The Pleasing Hour — Writers & Lovers is narrated by 31-year-old Casey Peabody, who is struggling to finish writing her first novel under the crushing weight of college loan debts and grief for her mother's recent, unexpected death. She's a weepy, anxious mess — yet so sympathetic you may want to bake her some cookies.

No one could accuse Casey of lack of discipline. When she manages to sleep at all, she gets up early to walk her landlord's dog so she can make it back to her desk by 6:30 to put in a few hours of writing before biking three miles into Cambridge, Mass. for the "mindless distractions" of her demanding waitressing job. By the time she bikes back to her damp, converted garden shed in Brookline, it's after midnight.

When we meet Casey, she's feeling blasted apart by a passionate affair with a poet she met at a prestigious writing residency she attended too soon after her mother's death. Like several of King's earlier heroines, Casey has been unlucky in love, beginning with a painfully flawed father and proceeding to a series of "on and off, here then gone" boyfriends.

There's nothing exotic or startlingly new about this story, but 'Writers & Lovers' is stellar proof that literature doesn't have to be groundbreaking to be absolutely compelling.

Muriel, one of her few friends who hasn't given up on writing — and a shining example of female friendship — brings Casey to a book signing at which she meets two love interests who come to represent her two roads in a yellow wood: Oscar, an older, famous author who has been raising his adorable (bordering on cloying) sons solo since he lost his young wife to cancer, and one of Oscar's workshop students, a high school teacher with a chipped front tooth and a rusted-out car. The novel keeps us wondering which way Casey will veer.

There's nothing exotic or startlingly new about this story, but Writers & Lovers is stellar proof that literature doesn't have to be groundbreaking to be absolutely compelling. In fact, King's novel — about the choices and sacrifices involved in holding onto a dream — would be a worthy addition to writing program curricula. Not only does Casey's story capture how hard it can be to believe in yourself, stay the course, and just finish the damn book when all your friends are getting paychecks and promotions, marrying and having babies — but also, reassurance that you don't have to break the mold to write a great book.

Suspense Along The Sepik With The Young Scientists Of 'Euphoria'

Among the elements that make Writers & Lovers so winning are the perfectly calibrated little details, convincing conversations, and droll wit. "Let's hope your next six years are a little more exciting, sweetie pie," a post office clerk comments when Casey confides how long she's been working on the stack of manuscripts she's sending to potential agents. "Still at it," the same clerk remarks when Casey returns to mail a revised copy. "Yup." "Well, can't shoot you for trying," the clerk says.

The novel, filled with believable lows and well-earned highs, zips along with wry jabs at men who don't listen (including several callous, abrupt doctors, like the gynecologist whose exam makes Casey "feel like a car being jacked up for a tire change"), contrasted with a few who do listen — well enough to really hear.

Writers & Lovers is a book about passion, desire, grief, determination, and finding one's way. It's also about craving love, family, and success. And it's about learning to stop worrying so much about how men "are perceiving you, at the great expense of what you yourself are feeling about them."

At a nadir, King's narrator stops in a bookstore on her way to work and browses through William Styron's memoir of depression, Darkness Visible. She notes, "The writing has that stark lucidity of someone trying to tell you the truest thing they know."

That isn't exactly King's achievement in this novel. Writers & Lovers is too generously infused with heart and soul and wit and wisdom to be called stark.