Accessibility links
Review: 'Onward' To A Quest For Elf-Assurance The opening minutes of Disney/Pixar's latest animated film are Disney-Channel cheesy, but as soon as Onward starts highlighting the comic physicality of its characters, it finds itself.

'Onward': Timid Teen On A Mythic Quest For Elf-Assurance

'Onward': Timid Teen On A Mythic Quest For Elf-Assurance 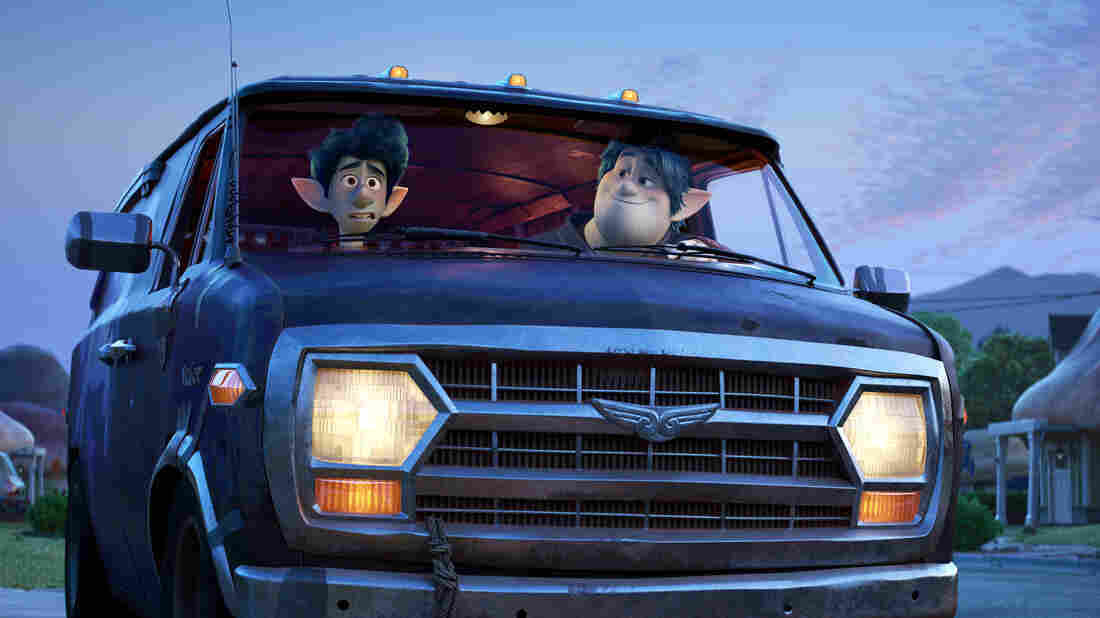 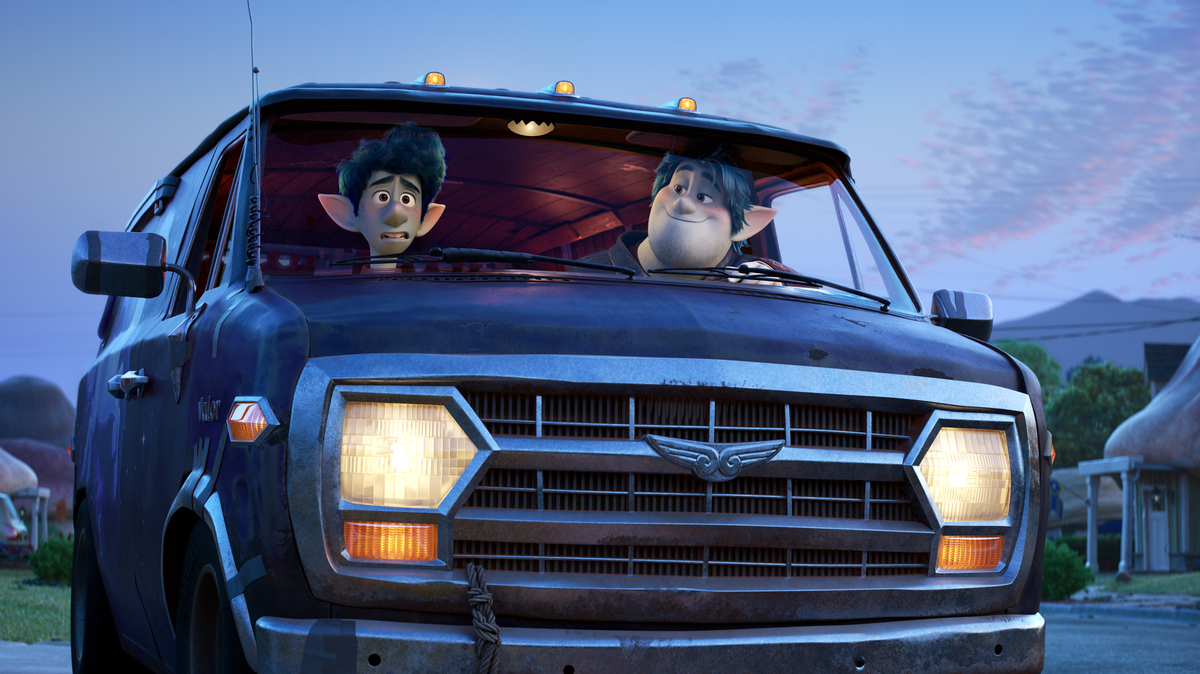 Ian (voiced by Tom Holland) and his older brother Barley (voiced Chris Pratt) set off on a distinctly suburban quest in Onward.

In the opening minutes of Disney/Pixar's Onward, we are met with various manifestations of loss.

There's the film's setting, a world where magic once flourished, and with it, pixies, unicorns, pegasi, elves, ogres, centaurs, mermaids — your standard-issue high-fantasy mythofaunic biome. But even here, in a gimmick the film leans into juuuuust enough, the Industrial Revolution arrived. As automation increased, magic faded. Elves still live in giant toadstools, but said toadstools are now rigidly apportioned into vast, Spielberg-suburban subdivisions and cul-de-sacs. Once-splendid unicorns have gone feral, raiding raid trash cans and hissing at passers-by like peculiarly horsey raccoons. If Middle-Earth had more strip-malls, it'd look something like this.

There's also the loss experienced by the elf-family at the film's center: mom Laurel (voiced by Julia Louis-Dreyfus) and her two sons — the younger, anxious Ian (voiced by Tom Holland) and his older, buff, RPG-obsessed brother Barley (Chris Pratt, squarely back in Andy Dwyer mode). It's Ian's 16th birthday, and he's given a gift left to him by his late father, who passed away when Ian was too young to remember him: A wizard's staff.

Finally, in these opening minutes, there's still another feeling of loss that manifests in the viewer — that of lost opportunity.

The jokes are glib and smarmy, the family dynamics achingly familiar, and as we follow Ian to high school, his every encounter and interaction feels less Disney/Pixar and more Disney Channel — which is to say, too sweet, too cornball, too affected, too faux-contemporary. The average very young child in the audience won't notice; the average parent will start checking the theater's exits.

On or about the 20-minute mark — not coincidentally, upon the arrival of a manticore called Corey, voiced by Octavia Spencer — the film seems to discover what it is: A testament to the remarkable degree of emotional expressiveness that Pixar's character-animators can imbue into a story.

That's not to say that the voice cast isn't solid — they are. But so much of what enlivens Onward has to do with the characters' body language, their facial expressions and their pure, albeit pixelated, physicality. In my screening, the scenes that produced the longest, loudest, deepest bursts of audience laughter — like Corey's interactions with her Chuck E. Cheese-esque doppelganger, or Ian's crossing of a yawning chasm — landed as hard as they did because they were so fully imagined, enfleshed and executed, with such confident, entirely visual, comic timing. I'm pretty sure they would have worked with the sound off.

'Sadness Is Like A Superhero': Amy Poehler On Pixar's 'Inside Out'

As for the story, it is, fittingly enough, a mythic quest/road movie: Ian, guided by a supportive Barley, must follow clues on a map that will outfit him with the tools he needs to bring their dead father back for a single-day visit. (Ian managed to bring the lower half of his father back in the film's opening minutes — and it's remarkable how much personality a pair of brown trousers and a couple of Florsheims can convey.) It's here that the film's suburban/fantasy hybrid nature coheres most strongly, as when one of the greatest challenges Ian must face is not slaying a beast, rescuing a damsel or finding a treasure, but instead ... merging onto a highway.

Pixar's been doing this whole story-structure thing for a while now, so it's no surprise that the various lessons (read: spells) that Ian learns over the course of the film will slot neatly into the film's climax. What is a surprise — and a good one — is how satisfying that climax turns out to be, especially since so many animated films remain content to collapse into noisy spectacle in their closing minutes. (Note: Onward's climax does count as spectacle, and it is noisy — but it has also been carefully crafted to directly reflect the emotional stakes that the filmmakers have been systematically raising over the course of its running time.)

The film remains true to its Pixar provenance in its willingness — nay, it's doughty insistence — on playing on viewers' emotions. Which is to say: The film's final moments do not simply attempt to pluck at the heartstrings, they saw away at the heartstrings savagely, with Gwar-like abandon. Prep your kids for this eventuality. And, discreetly, yourself.