Accessibility links
Humorous Highway Signs Aim To Steer Drivers Safely Down The Old Town Road Puns and funny references have become staples on highway message boards across the country. What's behind these roadside bits, and are they making drivers behave any differently? 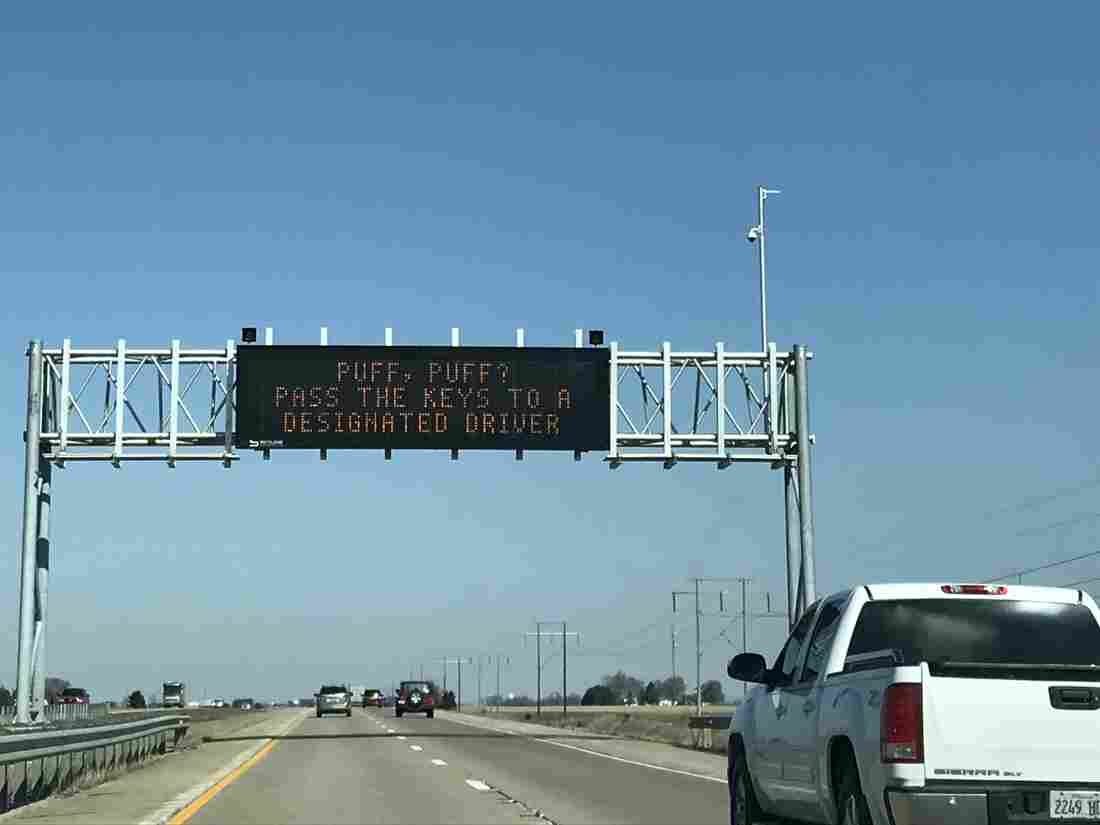 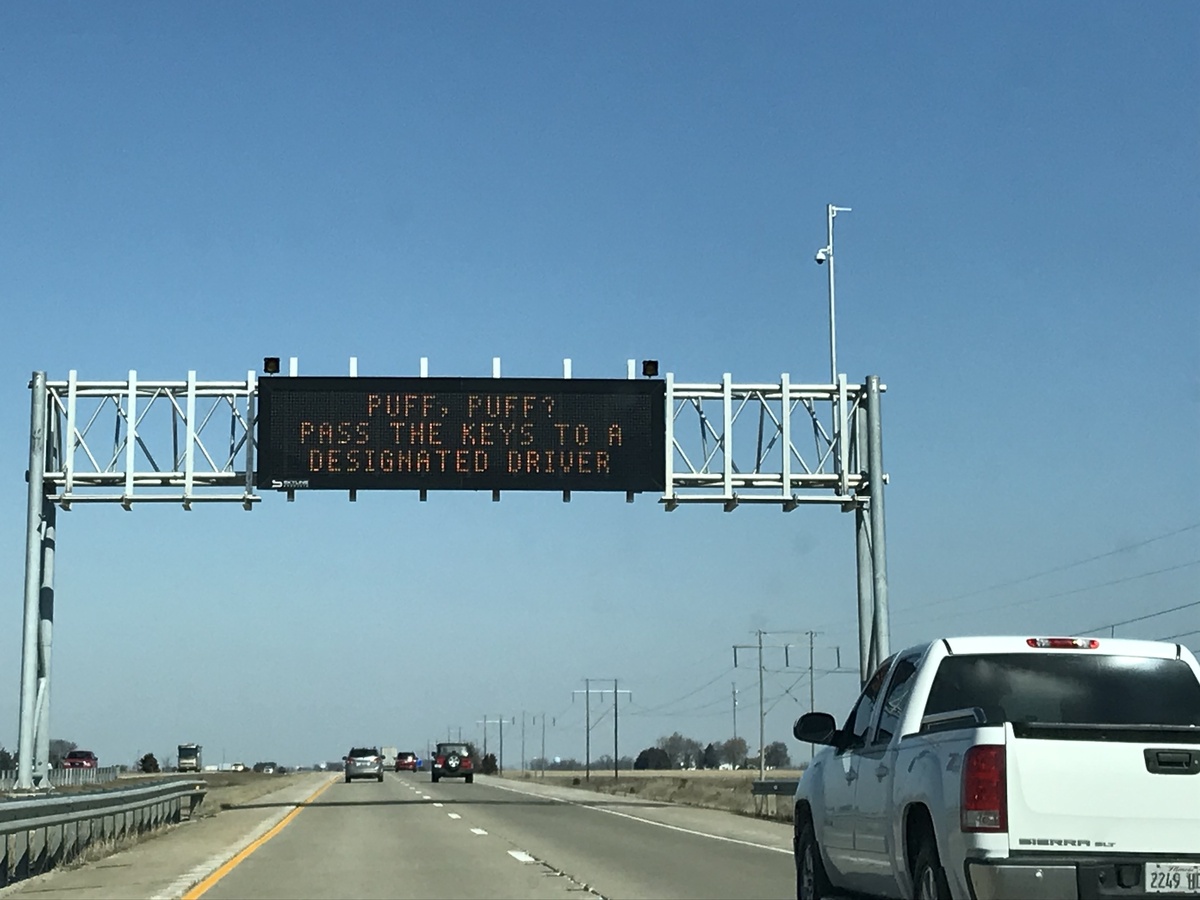 Highway sign that reads, "Puff, puff? Pass the keys to a designated driver."

Drive down any U.S. interstate and there's a good chance you will see a pun or a funny reference on the next electronic message board you spot. Such messages have become ubiquitous across the country lately.

But besides getting a snicker, what's behind these roadside bits, and are they making drivers behave differently?

They are known as dynamic message signs, and they usually remind drivers about speed limits or traffic delays. Though the technology has been around for decades, in recent years states across the country have been taking a different tactic with their messaging in a bid for more eyeballs.

A recent message that was flashing out across Illinois expressways is a perfect example of this. It read, "Got The Munchies? Get Food Delivered. Don't Drive High!"

Since Illinois legalized marijuana this year, transportation officials have been trying to get people to avoid driving stoned, so why not appeal to a stoner's love for snacking?

Elmo Bruggink, an Illinois tourist from the Netherlands, weighed in on the message. His home country is a place that has long been dealing with drivers who smoke weed, but Bruggink said officials haven't tried humor yet.

"We had marijuana legalized, I think, 50 years ago," Bruggink said. "I think it's like alcohol; if you try to beat it you get a lot of criminality, but you have to use it wisely."

Highway messages touch on all sorts of topics. Some are puns, some are really clever, some are just direct, like this one: "Treat Your Kids Like A Fanny Pack: Buckle Up In Back."

It's Guy Tridgell's job at the Illinois Department of Transportation to come up with message ideas like these. He said inspiration comes from everywhere.

"When Loyola University was in the Final Four, somebody on the secretary's team came up with the idea of 'Buckle Up If You Like To Ramble On.' Loyola's the Ramblers," Tridgell explained. "That was something we were able to turn around probably in about a day, and [we] got some pretty nice publicity for it."

His colleague, Operations Director Kyle Armstrong, explained unsafe drivers have made some of the state's roads dangerous, and that funny and topical messages are aimed at saving lives.

"We have nearly 1,000 fatalities on Illinois roadways a year, and we're just looking for any way to get that number down to zero. That is the ultimate goal," Armstrong said.

Mississippi officials, meanwhile, have been using social media to share safety messages with other states. One of their ideas referenced the Star Wars series The Mandalorian. It read: "Baby Yoda Uses The Force But Still Needs A Carseat." 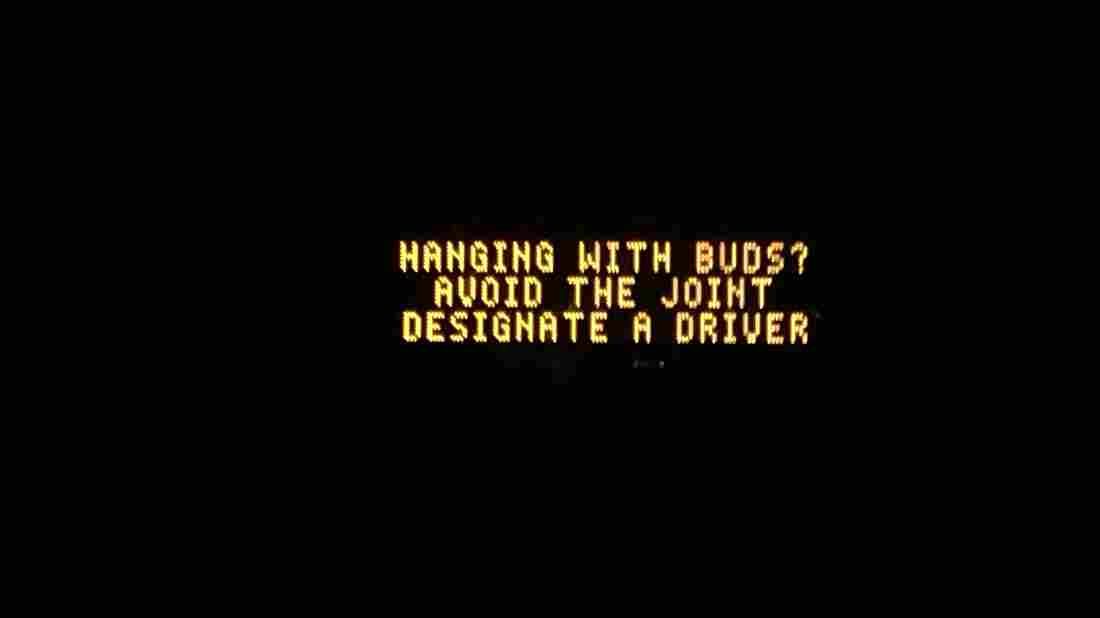 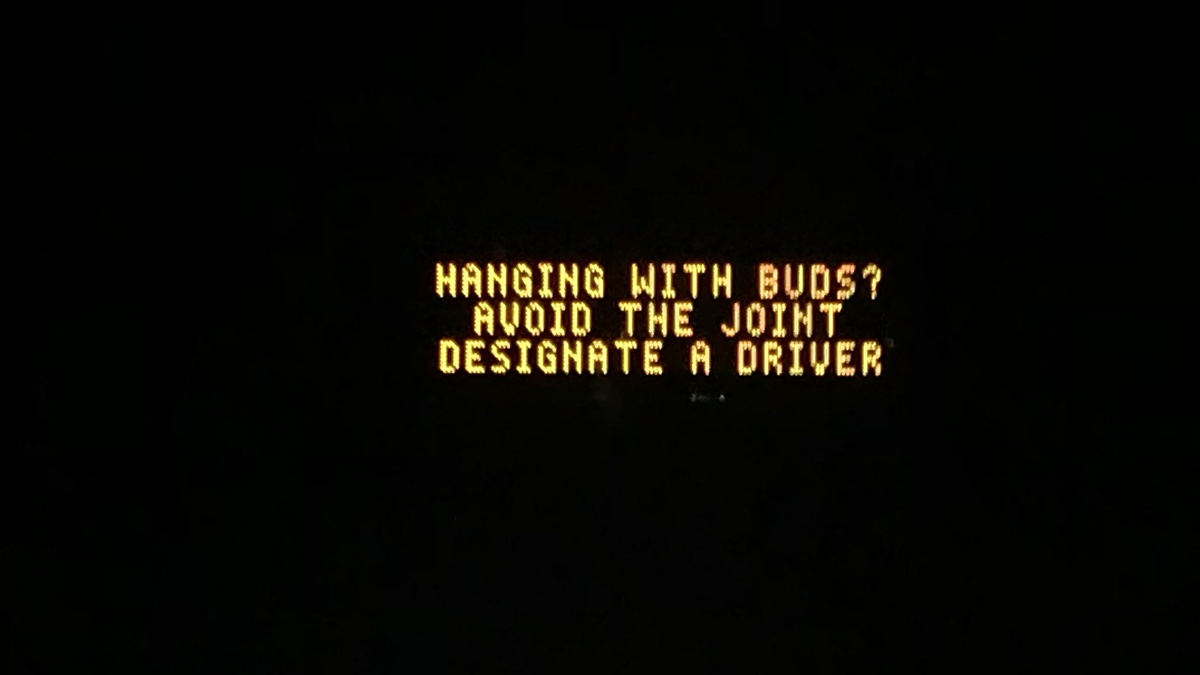 That got lots of love on Twitter, and Chris Turner with Mississippi's Department of Transportation said it's still one of his favorites.

"If one kid got a car seat, or one parent decided to put their child in a car seat rather than in the front seat [because of that sign], then we succeeded," Turner said.

Also on board the funny messaging trend is the Arizona Department of Transportation, which picked up the idea at an industry conference in 2015. Communications Manager Kevin Biesty said comedy and road safety aren't so different: it's all about timing.

"But the one missing link is the one who controls the whole thing, and that's the person behind the wheel," he said. "How do we get across to people, at a time when people are inundated with messages, to at least get them thinking and talking about safety?"

But a big question lingers around all of this: Do funny signs about seat belts or distracted driving make a difference in changing behavior, or is it just another distraction for drivers?

The Federal Highway Administration has surveyed thousands of people, and more than 80% of them said they understood the messages on highway signs. That's true even when they have to think hard to get the joke. Another study showed dynamic signs pull the eye in, making drivers pay more attention to what they're saying.

Back in Arizona, Kevin Biesty conceded it's hard to know if road signs are preventing crashes, but the bigger point is getting drivers to change their mindsets.

"If you were to walk into a child care facility today and smoke a cigarette, everybody in that room would look at you with horror," Biesty reasoned. "We need to make it socially unacceptable for people to do things on the roadway that put everybody at risk."

That means, in their universal quest to make roads safer, state DOTs will keep bringing on the jokes.

And as a reminder to everyone who's looking at this on their cellphone while driving: "Cousin Eddie Says Twitter's Full: Put The Phone Down."