Accessibility links
Coronavirus Recession: Fears Of Economic Slowdown Race Around The World U.S. businesses are shutting down plants and watching their sales plummet around the world. Many economists now say odds are increasing that the economy will slow, if not contract altogether. 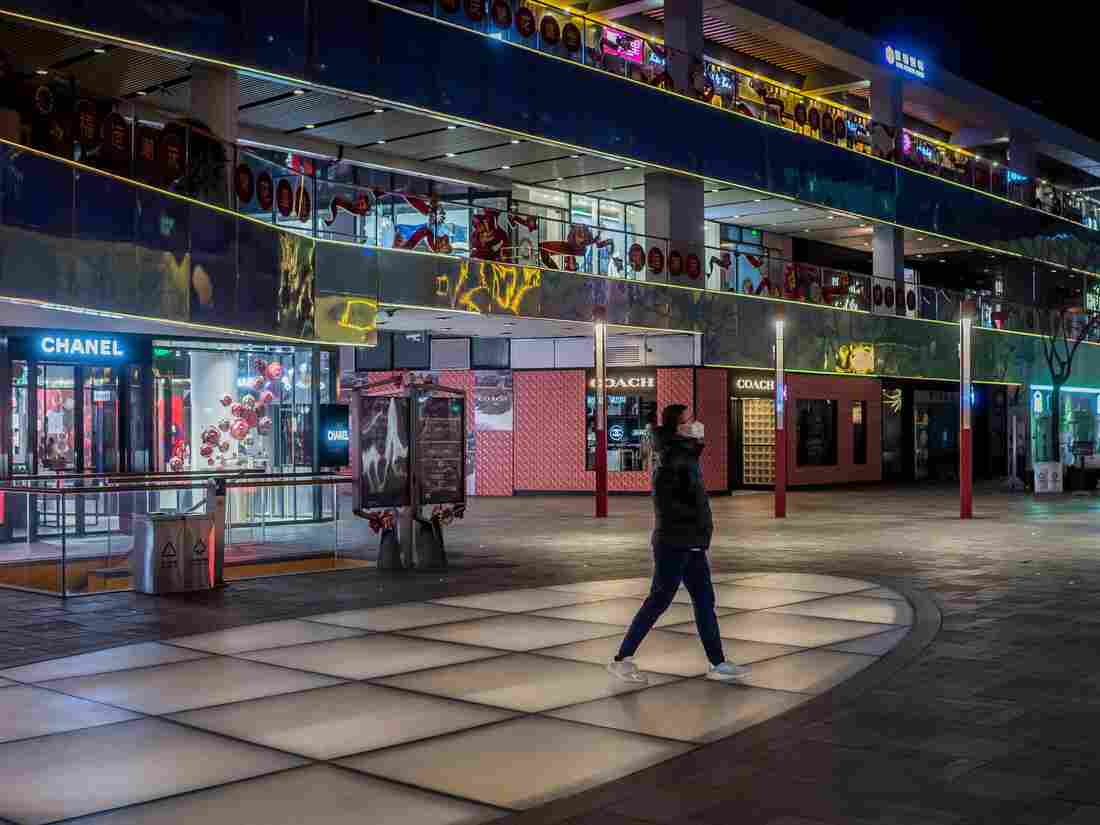 A man wearing a protective face mask walks at a nearly empty shopping mall in Beijing on Feb. 27. Business activity in China has all but halted, with entire cities under quarantine and industries forced to lay off workers. Nicolas Asfouri/AFP via Getty Images hide caption 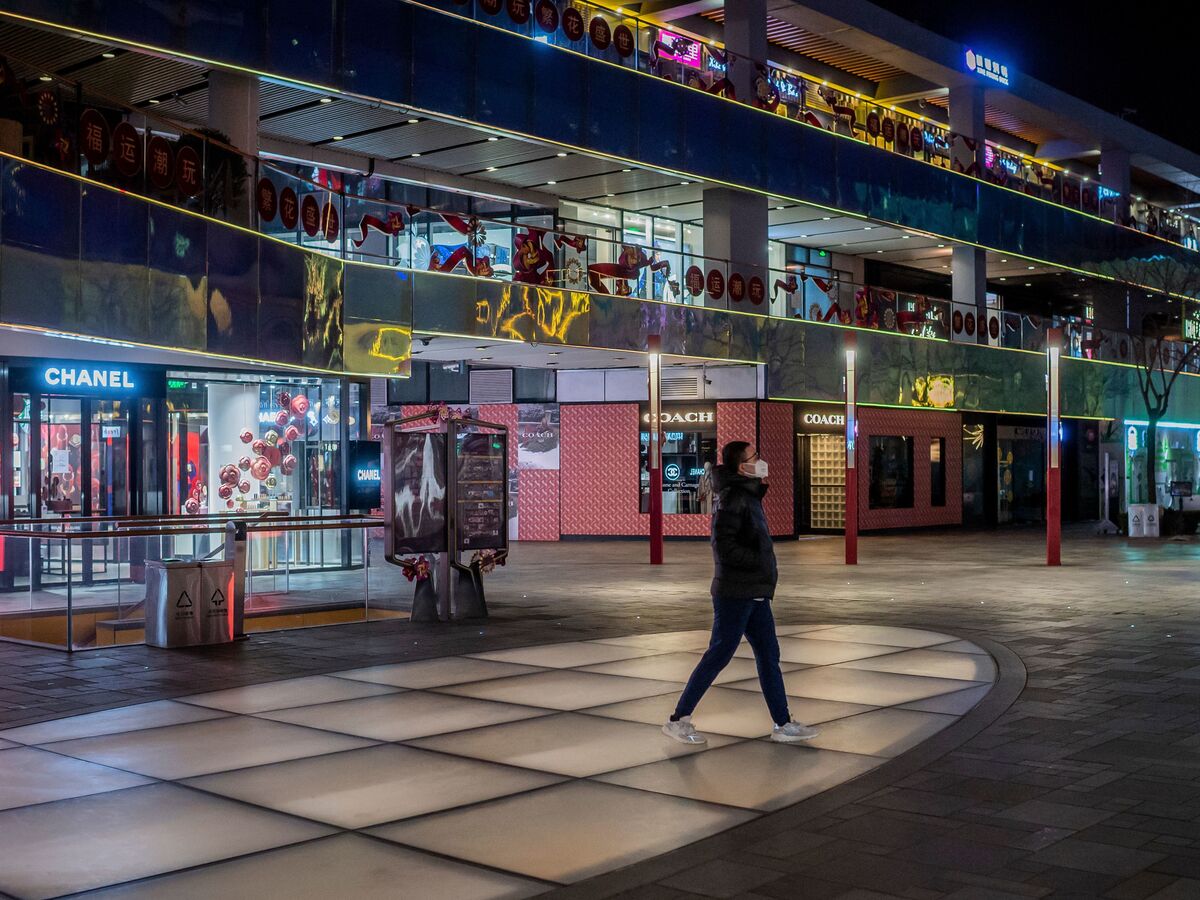 A man wearing a protective face mask walks at a nearly empty shopping mall in Beijing on Feb. 27. Business activity in China has all but halted, with entire cities under quarantine and industries forced to lay off workers.

As odds of a global recession rise, governments and central banks around the world are racing to fend off the economic damage from the spread of the coronavirus.

The toll has already landed hard on jittery financial markets. Stocks continued to sell off on Thursday as the Dow Jones Industrial Average plunged 969 points, or about 3.6%, as investors fled stocks. Companies have shut factories, canceled conferences and drastically scaled back employee travel.

In countries where the virus is most lethal, such as China and northern Italy, business activity has all but ground to a halt, with entire cities under quarantine and whole industries forced to lay off workers.

But in a global economy, even countries that have been relatively unscathed by the virus so far, such as the United States, face growing risks from the "still-evolving corrosive shock from the virus," says Bob Schwartz, senior economist at Oxford Economics.

How well the U.S. economy holds up "remains to be seen," he adds. "The outcome will probably determine if the economy stays out of a recession this year."

On Tuesday, the Federal Reserve unanimously agreed to an emergency interest rate cut of half a percentage point in an effort to keep the wobbly economy on track. Central banks in Japan and the United Kingdom are also signaling they're willing to cut rates.

Meanwhile, the U.S. Senate on Thursday gave final passage to a roughly $8 billion spending package to provide medical supplies in hard-hit areas and pay for vaccine research. President Trump has said he will sign the bill.

Despite such measures, many economists now say growth is likely to slow considerably this year — if not contract altogether.

Goldman Sachs projected on Sunday that because of the coronavirus, the U.S. economy would grow by an anemic 0.9% during the first three months of 2020 and would flatline during the second quarter.

The epidemic has already cut into growth this year and may slow the global economy even further, depending on how long it lasts, the International Monetary Fund said this week.

The uncertain outlook has sent the stock market onto a tumultuous roller-coaster ride not seen since the 2008 financial crisis, with turbulent drops followed by wild swings upward.

Even the Fed's interest rate cut has done little to ease the market's volatility. After Tuesday's 1,300-point drop in the Dow, stocks soared again Wednesday. But stock indexes were down sharply on Thursday.

The tumult in the U.S. economy still pales in comparison to the damage being felt in other countries. In China, auto sales cratered 80% last month, while a plunge in tourism is expected to push Italy and perhaps France into a recession.

Still, the list of U.S. companies that say they're feeling the epidemic's impact grows longer every day.

Procter & Gamble and Ralph Lauren are among numerous companies warning that the epidemic will hurt sales because shoppers are staying home, especially in the booming consumer market of China.

Others, such as Medtronic, Microsoft and Best Buy, say the virus has disrupted their supply chains in Asia and forced them to shut down production, at least temporarily.

Even when factories are reopened, many companies in China report difficulty finding enough workers to staff them, according to a survey of manufacturers by the American Chamber of Commerce in Shanghai.

Apple has warned that it won't meet its sales estimates for the current quarter, in part because its major suppliers, including Foxconn and Flex, remain understaffed.

The industries hardest hit have been tourism and travel, with many airlines canceling flights and companies such as JPMorgan Chase banning all but essential employee travel.

The U.S. Travel Association predicts that international travel to the United States will fall by 6% over the next three months.

"There is a lot of uncertainty around coronavirus, and it is pretty clear that it is having an effect on travel demand — not just from China, and not just internationally, but for domestic business and leisure travel as well," the association's president, Roger Dow, said in a statement.

As more and more companies feel the pain of the epidemic, the odds of a prolonged downturn grow.

"It is not just spending on restaurants and travel that is suffering, but also investment by businesses while they wait for the uncertainty to be resolved," Eswar Prasad, a senior fellow at the Brookings Institution, wrote in the New York Times this weekend. "This will have long-term effects on growth even if the outbreak proves short-lived."

But epidemics like this one don't come along very often, and economists don't have any good models to figure out what might happen. For now, the picture remains murky, says Bernard Baumohl, chief global economist at the Economic Outlook Group.

"No one can say with much confidence how much harm the virus will ultimately do to people or damage to the global economy," he says.