Accessibility links
Russia And Turkey Agree To Syria Cease-Fire, But Idlib's Agony Is Far From Over Turkey and Russia agreed to the cease-fire after Russian President Vladimir Putin and Turkish President Recep Tayyip Erdogan met on Thursday in Moscow.

Russia And Turkey Agree To Syria Cease-Fire, But Idlib's Agony Is Far From Over

Russia And Turkey Agree To Syria Cease-Fire, But Idlib's Agony Is Far From Over 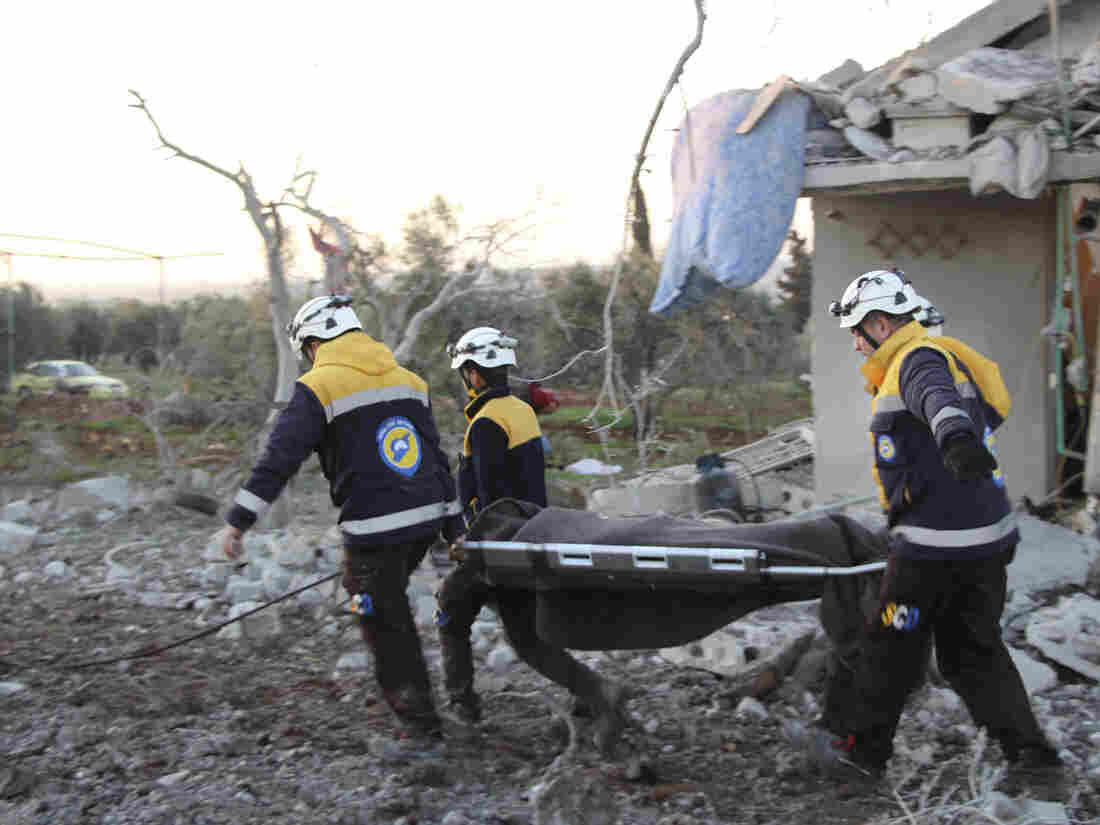 In this photo provided by the Syrian Civil Defense White Helmets, Syrian White Helmet civil defense workers carry a victim next to a destroyed house that was hit by Russian airstrikes, in Maaret Musreen village, in Idlib province, Syria, on Thursday. AP hide caption 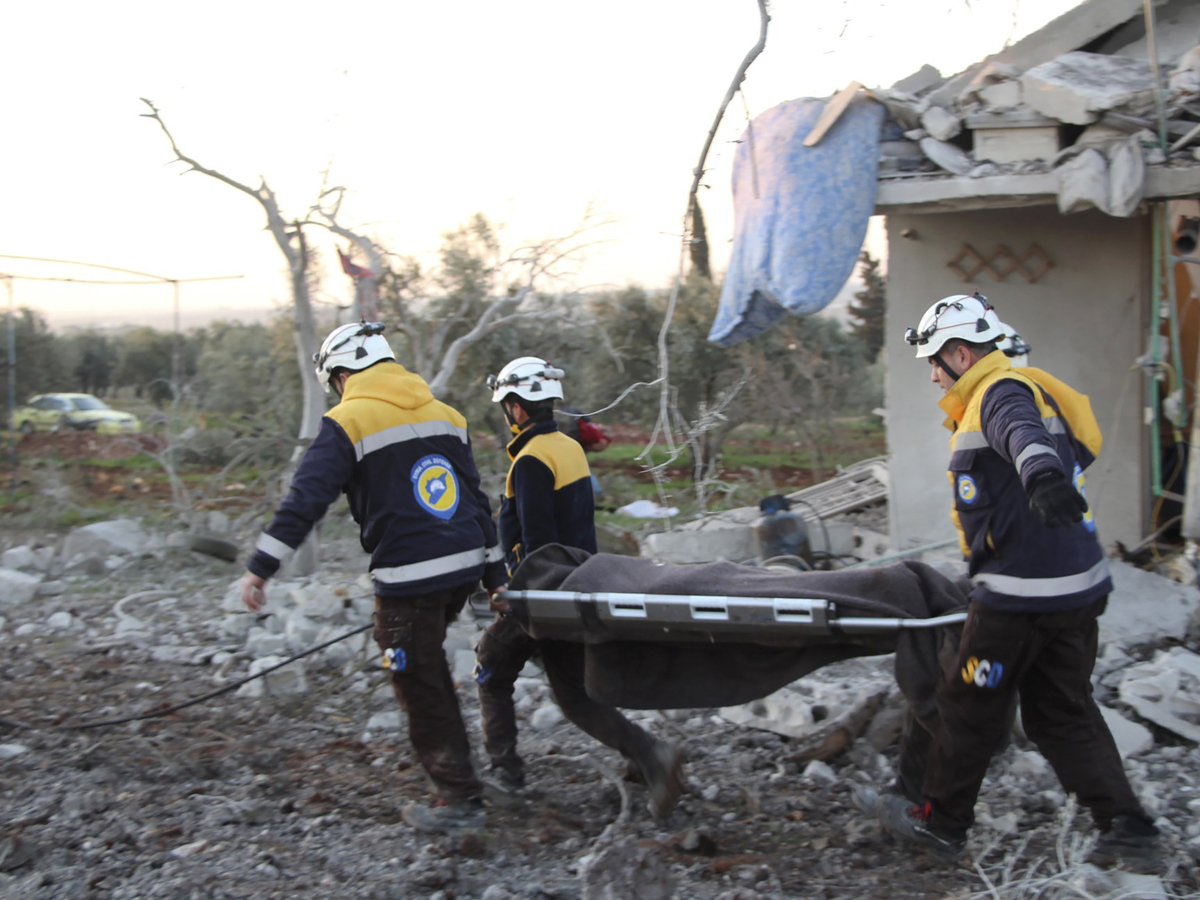 In this photo provided by the Syrian Civil Defense White Helmets, Syrian White Helmet civil defense workers carry a victim next to a destroyed house that was hit by Russian airstrikes, in Maaret Musreen village, in Idlib province, Syria, on Thursday.

Turkey and Russia agreed to a cease-fire Thursday, to begin at midnight in northwestern Syria's Idlib region. Five Turkish soldiers were killed in Idlib earlier this week and nearly a million people have been displaced in fierce fighting since December, as forces loyal to Syrian President Bashar Assad have made gains in the opposition's last redoubt.

"I express hope that these agreements will serve as a good basis for a cessation of military activity in the Idlib de-escalation zone [and] stop the suffering of the peaceful population and the growing humanitarian crisis," Russian President Vladimir Putin said Thursday, after talks with Turkish President Recep Tayyip Erdogan in Moscow. Erdogan pledged support for "Syrians in need."

The agreement, however, is unlikely to mark an end to the region's terrible suffering.

"A new deal does not mean a solution," says Turkey analyst Galip Dalay. It is "a temporary freezing of the conflict."

Dalay, a fellow at the German Institute for International and Security Affairs, does not believe there is even a medium-term plan. "What will happen three months from now is anyone's guess."

The question of the long term is even more difficult. Here are some key points to consider.

How did the situation in Idlib get so bad?

The problem has been simmering for years. The intensified fighting and displacement of the last few weeks were predictable, even if the timing was not. Before Syria's popular uprising turned into civil war in 2011, the province was a largely agricultural area. It became a center of opposition, but not a priority for Assad and his supporters.

First, government forces and their allies retook Syria's major urban and strategic areas, with years of hard fighting. As each area was retaken — the suburbs of Damascus, the city of Homs, areas of Aleppo — deals were done that saw opposition fighters and civilians who were afraid to live under Assad's rule sent to Idlib. 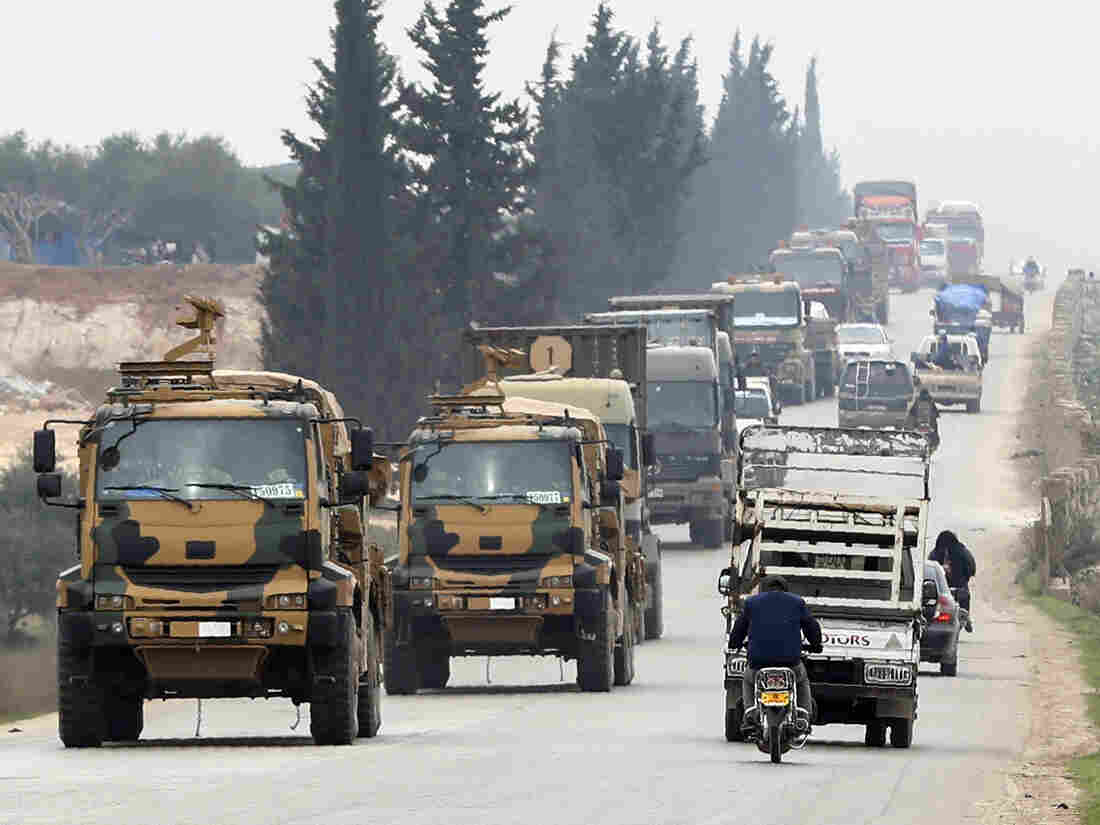 A Turkish military convoy drives in the east of Idlib on Feb. 28. AP hide caption 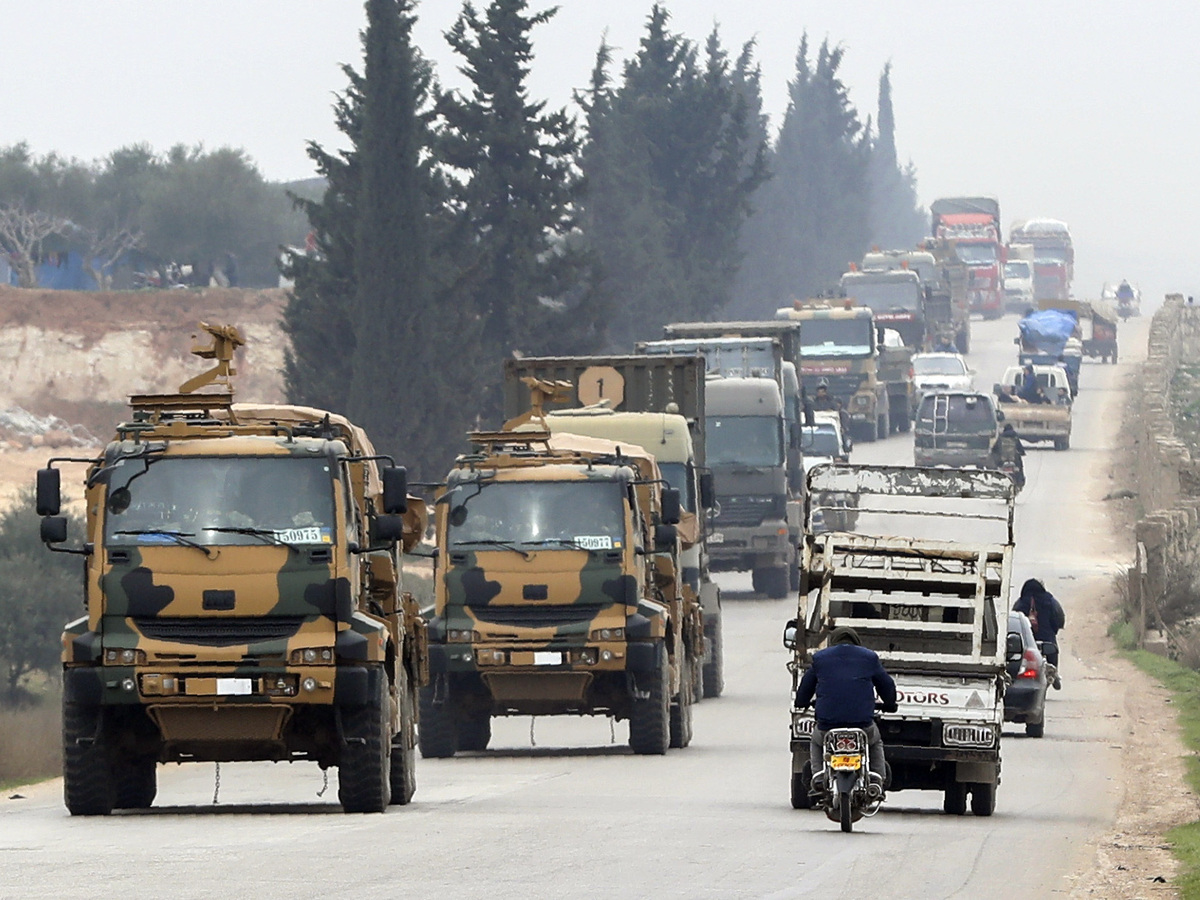 A Turkish military convoy drives in the east of Idlib on Feb. 28.

The province's population more than doubled, to about 3 million people. Most are civilians, of whom many live in camps or rely on some form of humanitarian aid. Some are opposition fighters, among whom jihadist groups are powerful.

Assad and his allies, especially Russia, are now pushing to retake Idlib. The conundrum, says Dalay, is "the Syrian regime does want the strategic location of Idlib. But it does not want the population of Idlib."

The prospects for that population are grim. They are mostly impoverished, and have been devastated by violence. This week, for the first time, a United Nations body directly accused Russia of the "war crime of launching indiscriminate attacks in civilian areas." The U.N. also says the recent mass movement of people "represents the single largest volume of displacement since the Syrian crisis began in 2011."

Another conundrum: The displaced have nowhere to go. Idlib borders Turkey, which has already taken in about 4 million Syrian refugees. As the Turkish economy has weakened, anti-refugee sentiment has bubbled up. Erdogan has said Turkey cannot take in any more people and has built a border wall. European leaders, too, have no stomach to accept a large number of Syrians, even those fleeing state-sponsored violence.

What is Assad's goal in Idlib, and how close is he to achieving it?

Assad has said that he will retake "every inch" of Syria. Although it has taken him years and come at untold cost, this seems exactly his policy in Idlib. 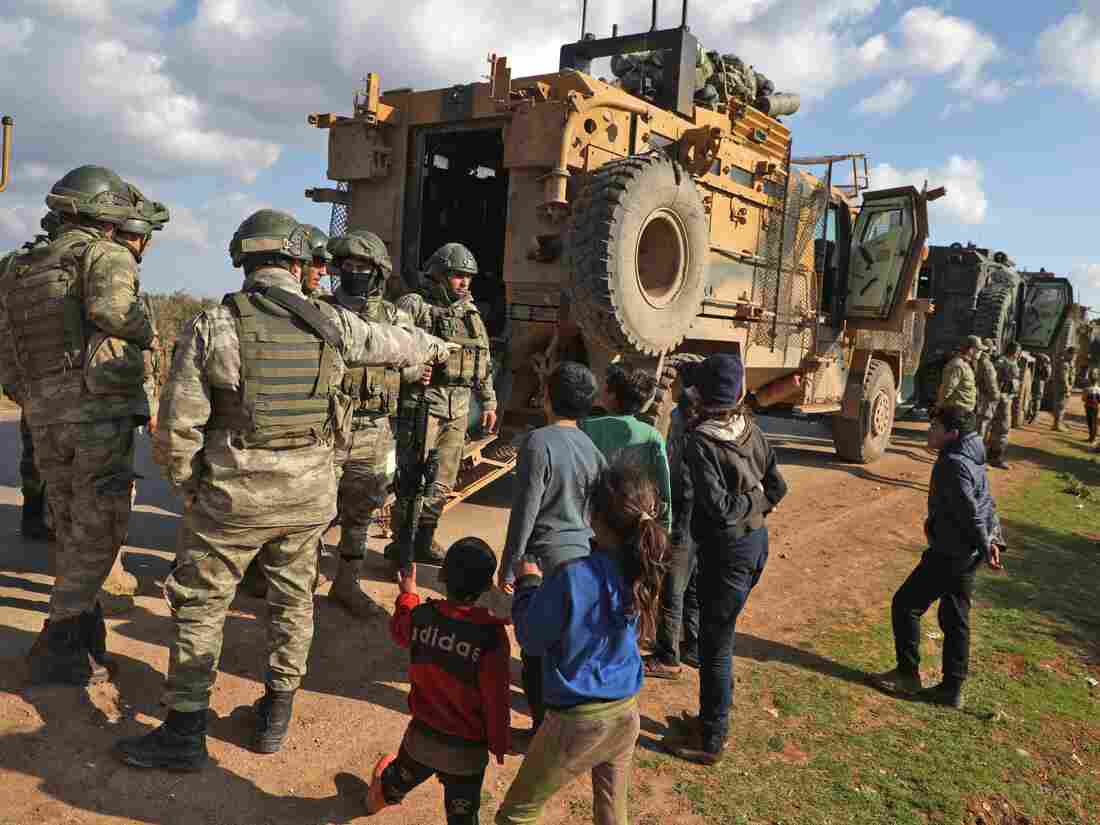 Displaced Syrian children speak with Turkish soldiers near the town of Batabu on the highway linking Idlib to the Syrian border crossing with Turkey on March 2. Aaref Watad/AFP via Getty Images hide caption 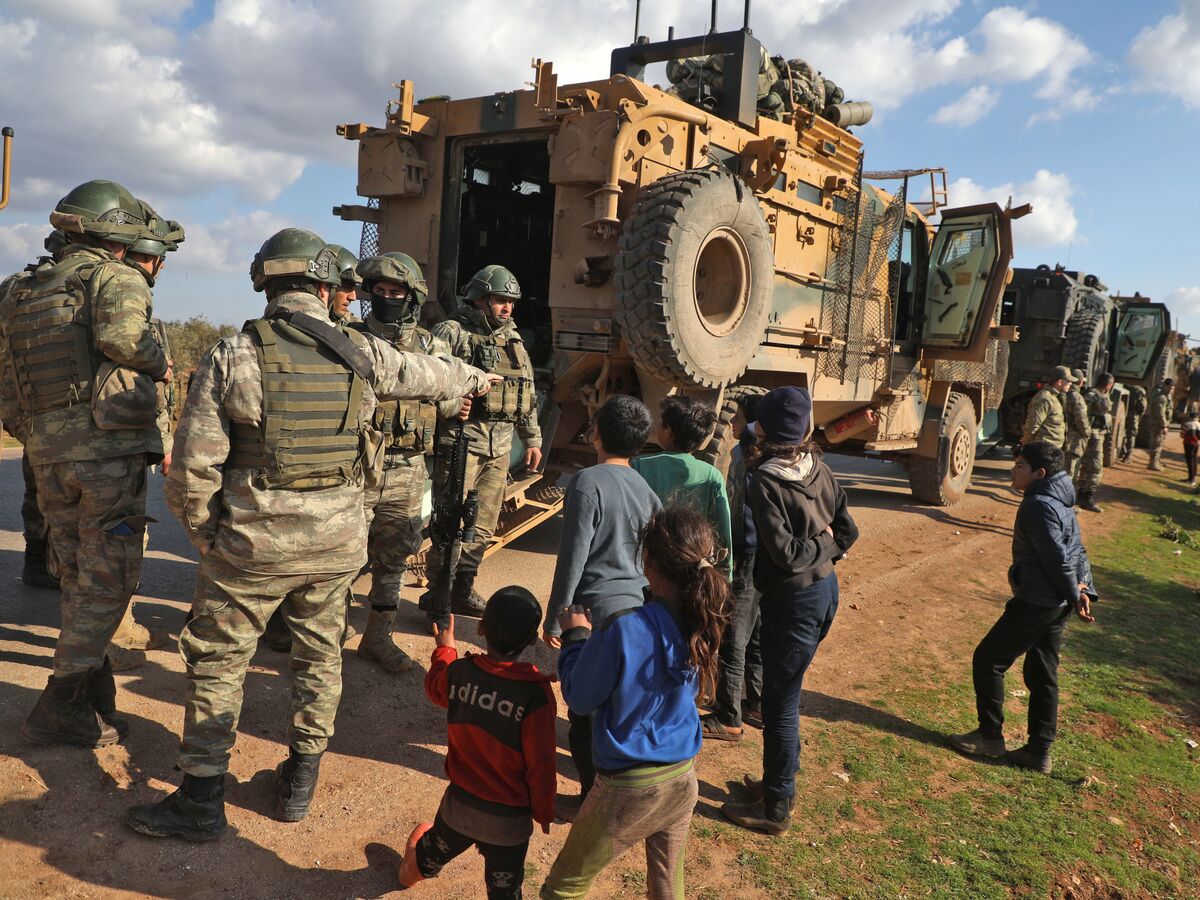 Displaced Syrian children speak with Turkish soldiers near the town of Batabu on the highway linking Idlib to the Syrian border crossing with Turkey on March 2.

It may be that his recent gains happened faster than he expected. "We were surprised to see the rapid advance," says a diplomat in Lebanon, who spoke on the condition of anonymity because he was not authorized to speak on the record. "A game-changer was the intervention of Iran in western Aleppo."

Assad's Iranian allies have been largely disengaged from Idlib, says the diplomat, preferring to focus on neighboring Aleppo province, a commercial center. But when Iranian forces expanded into western Aleppo and beyond at the beginning of this year, the setback to rebels allowed Assad loyalists to retake key roads and towns in neighboring Idlib, with Russian air support.

But then, alarmed by the prospect of people approaching the border as they fled the advance, Turkey increased its support for rebels, who pushed back and retook territory. Russia, in turn, doubled down on its air campaign in support of Assad.

Fighting has been ferocious in the last week, with Syria and Turkey taking and inflicting casualties and coming closer to all-out war with one another. The diplomat says Assad may want to retake Idlib and kill or expel a significant portion of the people there — but, "I have always assumed that the fate of Idlib will depend on the Russians and the Turks. Assad wants it, but can't take it without Russian air support."

What do Presidents Putin and Erdogan want? 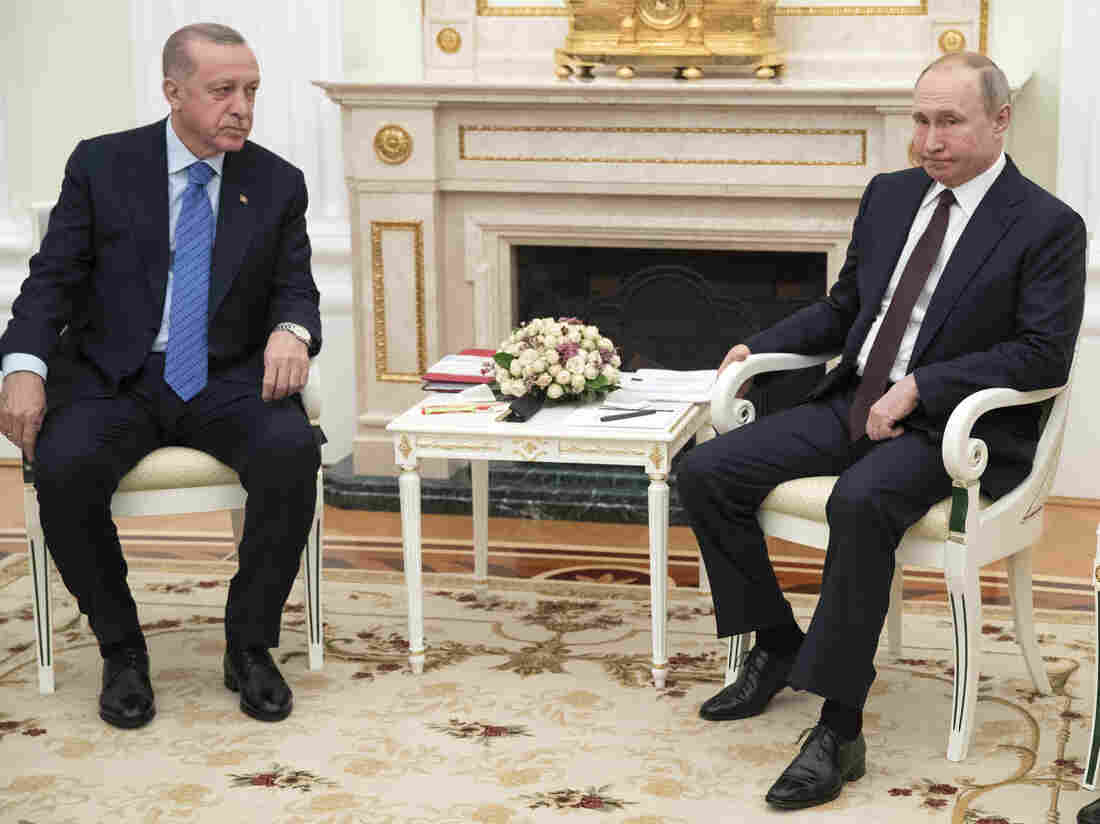 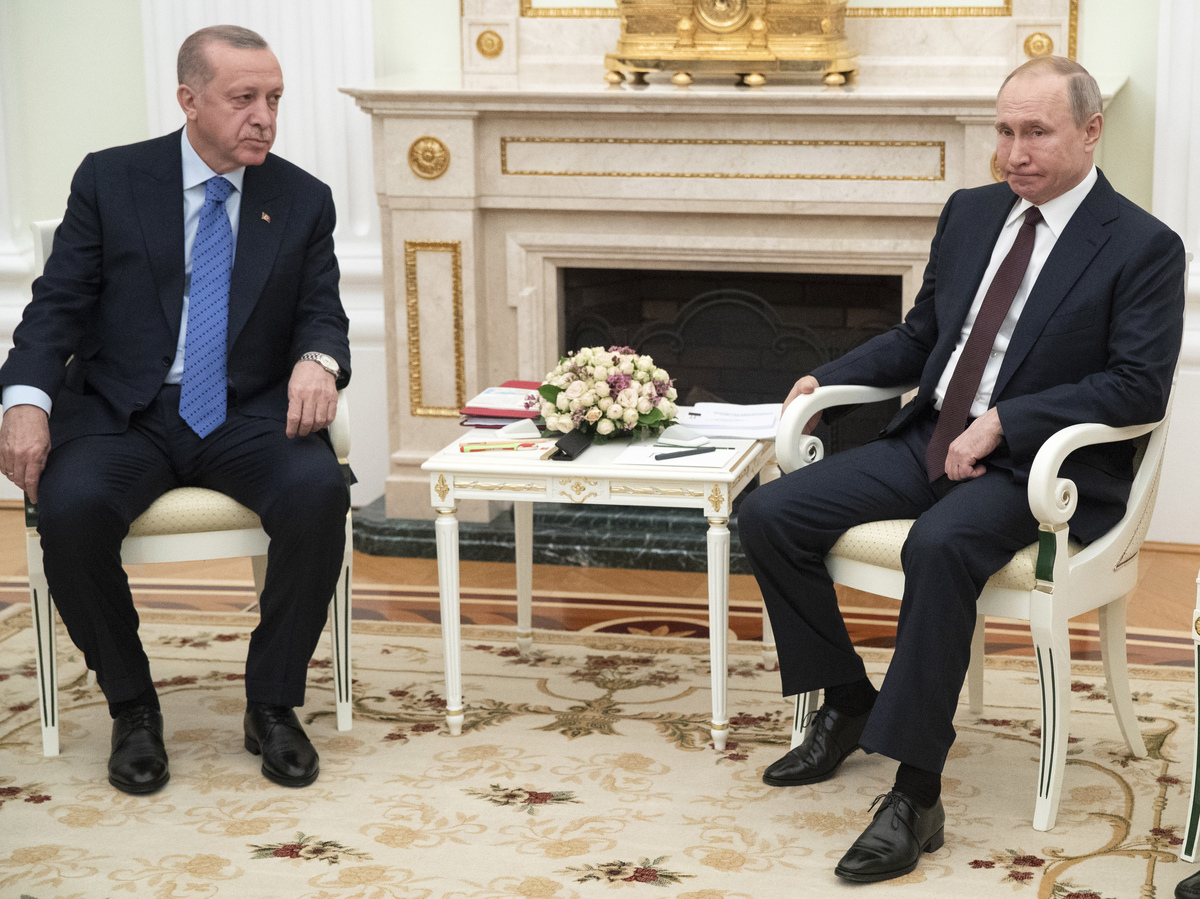 Russian President Vladimir Putin and Turkish President Recep Tayyip Erdogan talk during their meeting in the Kremlin, in Moscow on Thursday.

"Turkey's most immediate goal is to make sure that another wave of refugees does not cross into Turkey," says Dalay.

Erdogan also wants to maintain Turkey's present level of influence in Idlib, where it has troops and observation posts and de facto control over areas along the border where many displaced people are. Turkey controls much of the aid that enters. Strategically, Turkey's grip on Idlib also helps it maintain a presence in other enclaves in Syria, where it is keeping Kurdish forces — which it considers terrorists — away from its border.

Turkey once imagined a powerful role for itself in a post-Assad Syria. Now it only has a "plethora of bad options," says Dalay. He believes Turkey's best-case scenario now would be to succeed in persuading Western powers to enforce a no-fly zone over part of Idlib and create an enclave or buffer zone where Syrians who believe they cannot return to Assad-held areas would live under Turkey's protection, without actually crossing its borders. Some analysts have compared this scenario to the Gaza Strip — a restricted and difficult life for a large number of people.

As for Russia, it wants to keep Assad in power.

"Russian policy — you might like it or not — but it has been very consistent from the beginning," says Fyodor Lukyanov, an analyst at the Russian International Affairs Council. He says that for Putin, "Any preservation of regime is better for regional and national security and stability than any change of regime."

This conclusion was reached, he says, after the Kremlin watched the impact of regime change in Iraq and Libya, and that Russia is seeking to support Assad in retaking territory as close to pre-war Syria as possible. Additionally, Lukyanov says, there are several hundred jihadist fighters from Russia and post-Soviet states in Idlib, and Russia wants them "eliminated completely."

How realistic are these scenarios?

The ultimate outcome could depend on the relationship between Turkey and Russia, which is "very strange, paradoxical," says Lukyanov. "It's not based on trust. It's not based on sympathy. It is based on the understanding that without at least coordination with the other side, neither of them is able to achieve any of their goals."

The two countries have many interests beyond Syria — ranging from the conflict in Libya, where they back opposing sides, to a recently opened gas pipeline from Russia to Turkey, and arms deals. So they are prepared to negotiate and might someday reach a sustainable agreement.

Although years of talks on Syria have yielded various agreements, there have also been many complaints of violations. Russia claims Turkey has failed to "neutralize" al-Qaida-linked groups among rebels, while Turkey says Russia targets civilians. Russia had already offered Turkey control of an area within Idlib, but it was much smaller than Turkey would have liked.

Other outcomes are possible. Some observers believe people in Idlib, armed with tanks and bulldozers, could possibly breach the border. Others fear a catastrophic massacre of civilians by Assad loyalists.

Meanwhile, Western governments, not militarily involved, have limited influence. American officials have so far ruled out helping Turkey create a no-fly zone. NATO and European leaders, too, have offered solidarity but not game-changing military support to Turkey.

Some think cycles of violence are likely to continue in Idlib.

"Turkey manipulates the issue of refugees. Russia essentially behaves as if it wanted to create a new wave of refugees," says Emile Hokayem of the International Institute for Security Studies. Although Europe has limited leverage in the negotiations, Hokayem says, it could find itself dealing with fallout from a fresh wave of refugees.

"We're not approaching the end of the Syrian conflict," he says, "and I think we have to brace ourselves for more of this bloody instability."