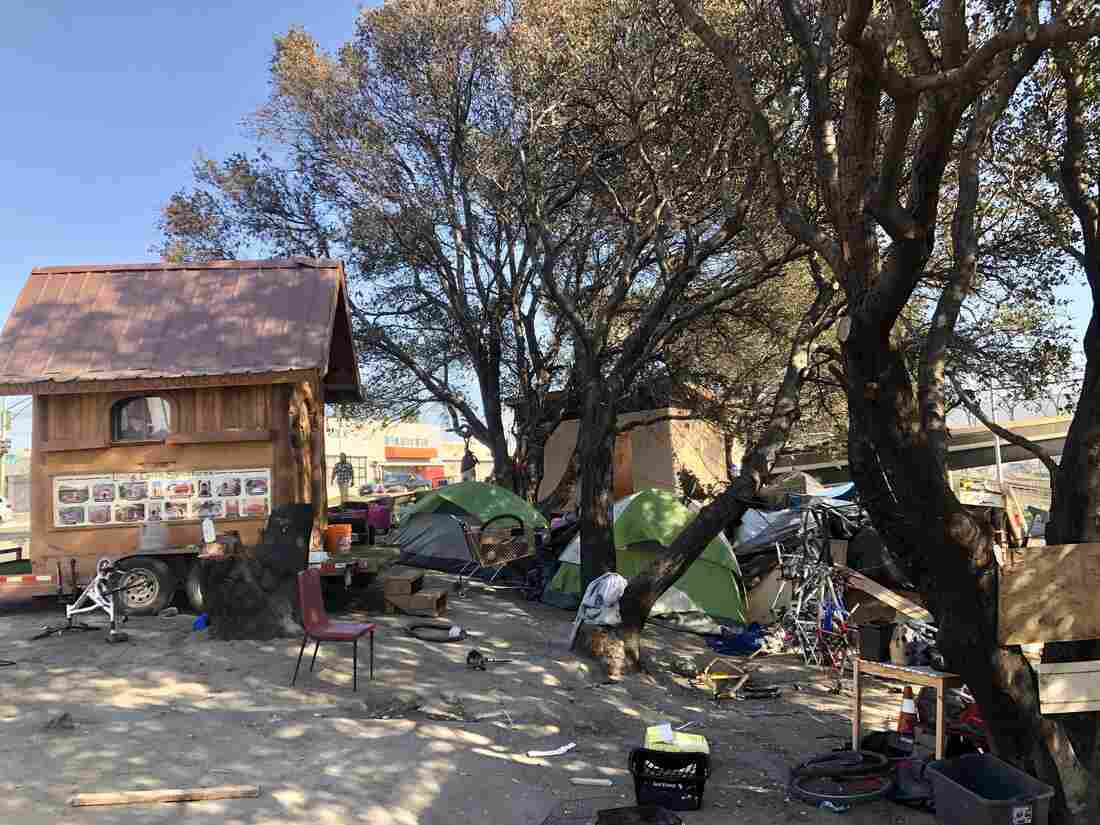 This tent camp is nestled between a freeway, rail tracks and a Burger King near the Fruitvale section of Oakland. Eric Westervelt/NPR hide caption 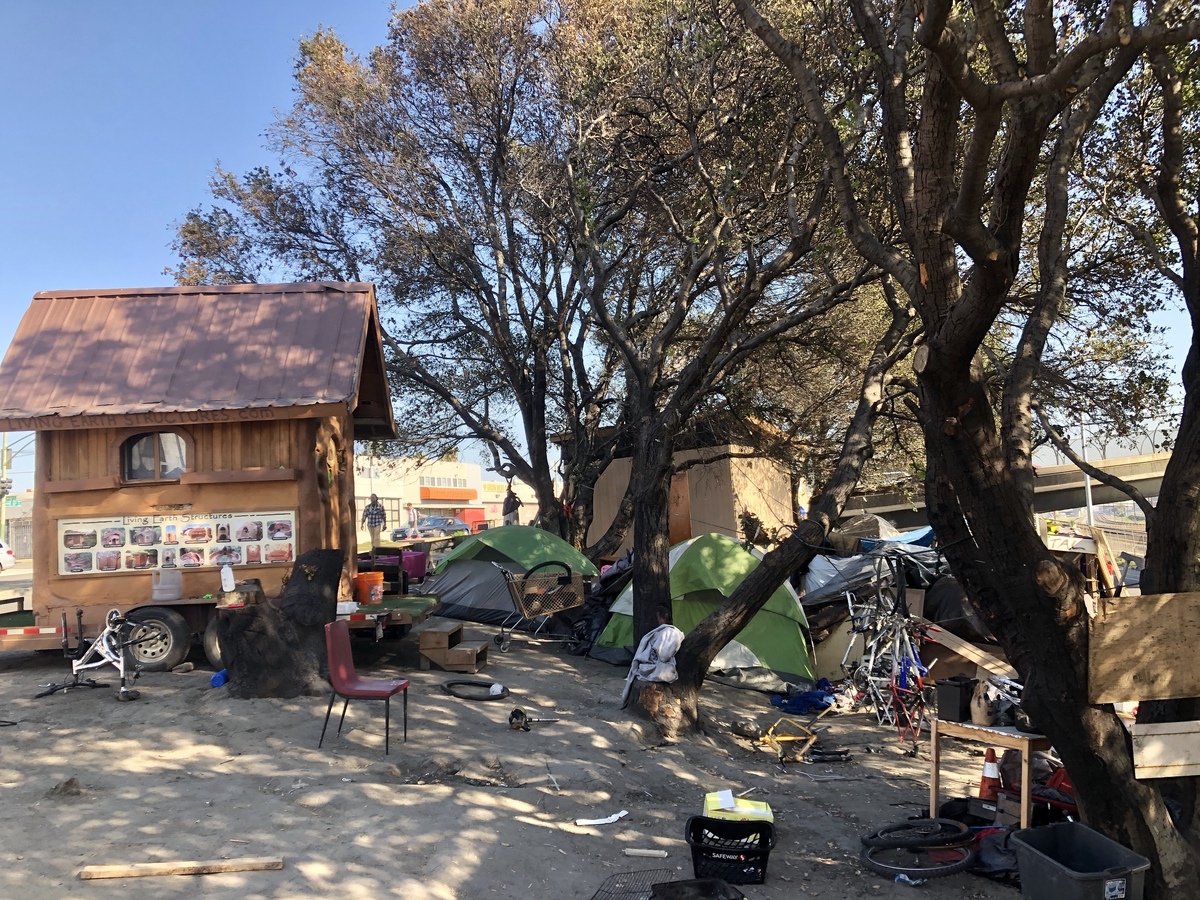 This tent camp is nestled between a freeway, rail tracks and a Burger King near the Fruitvale section of Oakland.

Homelessness is a vexing national problem, but nearly half of the country's unsheltered homeless live in one state: California.

Gov. Gavin Newsom has vowed to make to make solutions his top priority, calling homelessness in the Golden State "a disgrace." He's proposed significantly boosting funds for shelters, housing and support services and building 3.5 million new affordable homes by 2025, among other measures.

Newsom has also floated the idea of making additional housing and shelters a legal requirement, not a policy option, for California's cities and counties.

But there's widespread concern and confusion over how any mandate, if it happens, could actually work. And local governments are calling for details, flexibility and a more robust, coordinated strategy.

"It is critical that we get much more clarity," says Oakland city councilman Loren Taylor, who represents a large part of East Oakland where homelessness is a huge challenge.

"One of the governor's proposal is to have a regional leader that can help to guide and hold accountable different cities: What does that actually look like? How is that accountability held? There are a lot of questions still to be answered," Taylor says. "We're talking about lives here."

Lives that are now more vulnerable as public health officials worry that these homeless camps are ripe for the potential spread of the coronavirus while policy makers debate how to address the growing homeless crisis.

County officials, too, are looking for more details and flexibility. They say there's an urgent need for a clearer framework on how best to align money, accountability and resources; "to recognize and clarify which entity is responsible for what," says Graham Knaus, executive director of the California State Association of Counties. "It's hard to get people on the same page on anything, let alone something as complex and hard as homelessness."

The association says that "action must include clearly defined responsibilities at the state, county and city level that are aligned to sustainable resources — in order to deliver long-term results."

The good news, Knaus says, is that there's broad agreement on the urgent need to make real progress on those challenges "in a way that's never been there before," he says. "The climate is ripe to make that happen."

The nonpartisan Legislative Analyst's Office wants more details, too. The office recently gave the governor the bureaucratic equivalent of a face slap, writing that Newsom's budget "does not present a clear path for how the state will address homelessness."

"The problem is we have many jurisdictions responsible for the problem. But no one is actually responsible for much of anything," says Darrell Steinberg, the mayor of Sacramento and co-chair of the governor's taskforce on homelessness.

Solutions are too often undercut by a lack of coordination and collaboration across boundaries, he says. The homelessness problem doesn't recognize city and county borders, but it's often being addressed as if it does. There is no housing production standard, there is no requirement that jurisdictions work across their boundaries to consolidate resources and act more urgently, Steinberg says. "There is no requirement to get the existing money out within 30 or 60 days instead of six months or nine months."

And then there's the core problem: there are no benchmarks that cities and counties have to meet and no penalty if they fail to act.

He argues there's no more pressing example of a crucial public policy area where everything governments at levels do is almost entirely optional or voluntary.

"We don't say it should be optional to build public schools and educate our children," Steinberg says. "We mandate public education, and that mandate sends a very powerful signal to everyone responsible that it is not a choice. It is a requirement."

But it's not clear the governor and his taskforce are on the same page on mandating more shelters, affordable housing and mental health and substance abuse programs. The governor has said he broadly supports the idea, but perhaps it should start as a pilot program. A state constitutional mandate would require both legislative and voter approval.

And if the carrot to communities is more money, Mayor Steinberg concedes it's not at all clear yet what the stick should be if jurisdictions don't step up.

"So this is the question. It should not punish, but it should require compliance," he says.

But that ambiguity leaves homeless advocates worrying that a statewide mandate could lead to more constitutionally dubious sweeps and crackdowns on encampments.

"I think it's potentially dangerous," says attorney Angelo Sandoval with the Ella Baker Center for Human Rights. "Because when we tell cities and counties they need to use every tool at their disposal, but we're leaving tools of criminalization, displacement, harassment at their disposal, then we're kind of potentially justifying some really egregious behavior, potential violations of human rights."

Experts say the handful of cities that have radically reduced the problem or achieved what's called "functional zero" homelessness — meaning that homelessness is rare or brief — share strategic commonalities: One, a 'housing-first' approach that does not make housing conditional on sobriety, strict rules or length of homelessness. And two, getting close coordination and collaboration among providers. "You have to have everyone rowing in the same direction," says Barbara Poppe, the former director of the U.S. Interagency Council on Homelessness and now a consultant.

"You can't make real progress if you don't have both of those things going on," she says.

"Mandates can be helpful because they set a clarity of policy and purpose," she adds, but close coordination is vital. 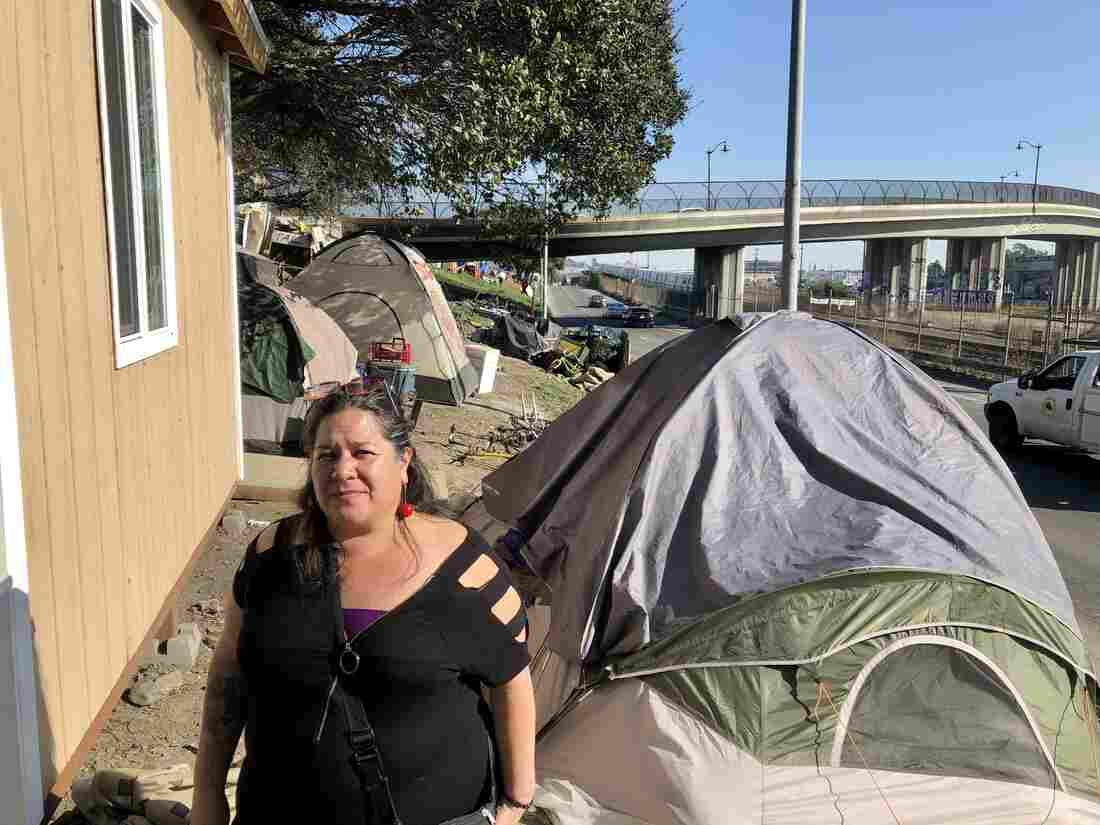 Anita DeAsis says she was evicted from her Oakland home last year, and now lives in a camper with her two young children. Eric Westervelt/NPR hide caption 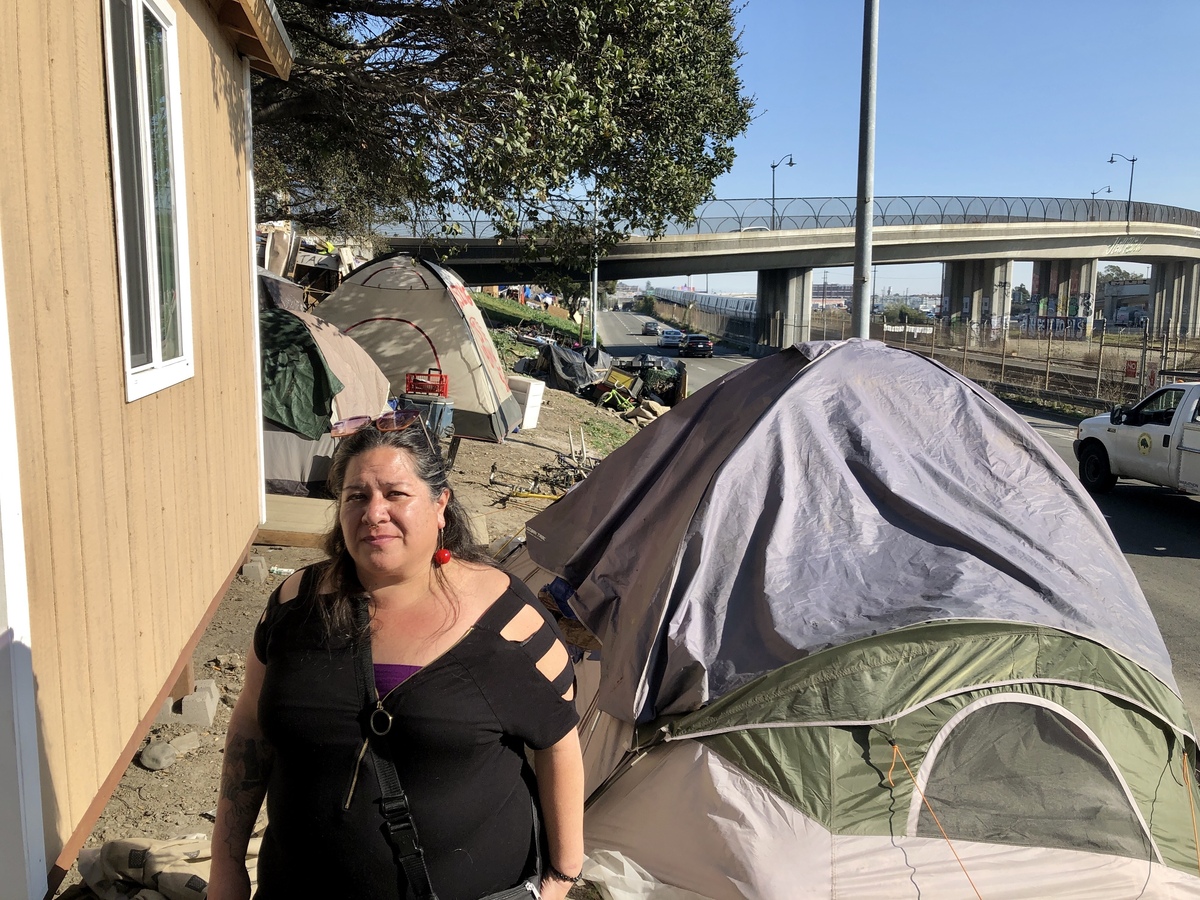 Anita DeAsis says she was evicted from her Oakland home last year, and now lives in a camper with her two young children.

Nowhere is the urgency to act felt more than in the scores of tent and shack homeless villages that have mushroomed under freeway overpasses and nameless patches of land across much of the state. They're today's "Hoovervilles" in one of the nation's most prosperous states.

"There's little clusters and cliques and families that are all up and down the street," says Anita DeAsis, a homeless activist. The caterer and chef says she was evicted from her Oakland home last year, and now lives in a camper with her two young children.

This camp is nestled between a freeway, rail tracks and a Burger King near the Fruitvale section of Oakland. It's one of many homeless villages unsanctioned or supported by the city. Here, tents and makeshift shacks are mixed with half a dozen sturdier wooden tiny homes. They're one-room sheds donated or built entirely by local residents and businesses.

"It's definitely an upgrade," she says of the sheds, "which is what we've been telling the city they need to do because this is crazy. With all the resources and wealth that we have in the Bay Area, this should not be happening."

Driven mostly by steadily rising rents and home prices, Oakland's homeless population shot up 47% in the last two years. That's now more than 4,000 people estimated to be living on the streets.

The city council is still studying and debating what to do about these kinds of "unsanctioned" camps. DeAsis says it's long past time for talk. "The problem is getting worse. So we don't understand why we're still having this conversation."

She's concerned that the $106 million the county budgeted for homelessness last year, plus millions more in state and federal aid, hasn't reached people on the streets. She wonders, as do many lawmakers and activists across the state, where has all the homeless money gone?

"There should be port-a-potties on every encampment. Every encampment should be sanctioned because there's nowhere for people to go," DeAsis says. "Until there is affordable, permanent housing for everybody in the Bay Area, these encampments are going to exist and they just need to get over that, and accept that, and f***ing help people!"