Accessibility links
Review: 'First Cow' Is Ruminative Two men struggle to eke out a living in the Oregon Territory by stealing the milk of a wealthy landowner in writer-director Kelly Reichardt's film. 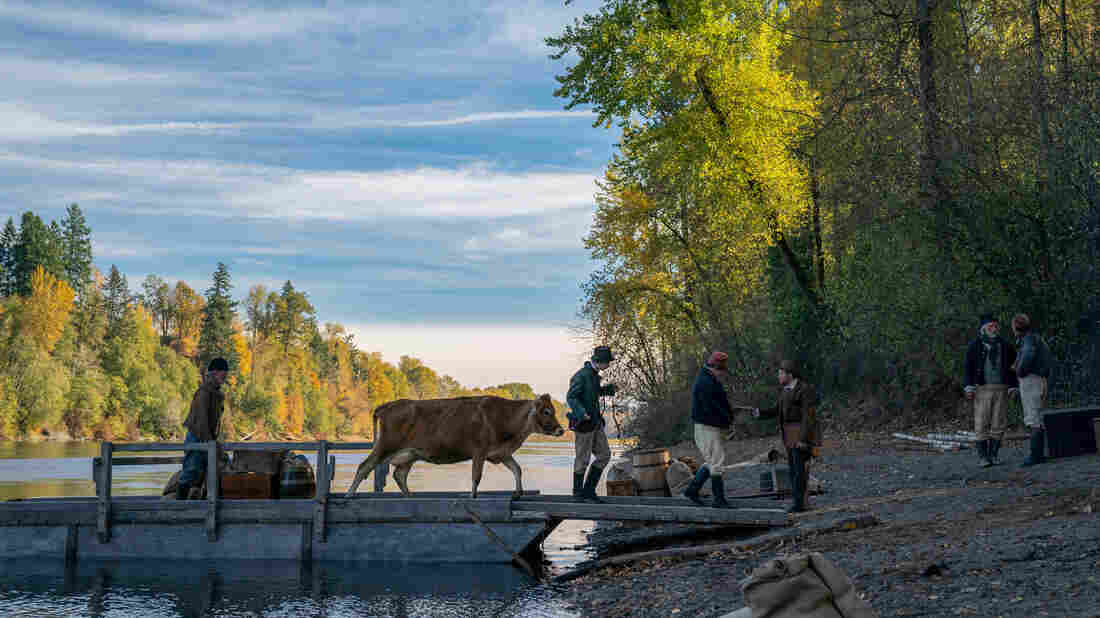 When Greener Pastures Are Unpasteurized: Two men try to start a business in the Oregon Territory in First Cow. Allyson Riggs/A24 hide caption 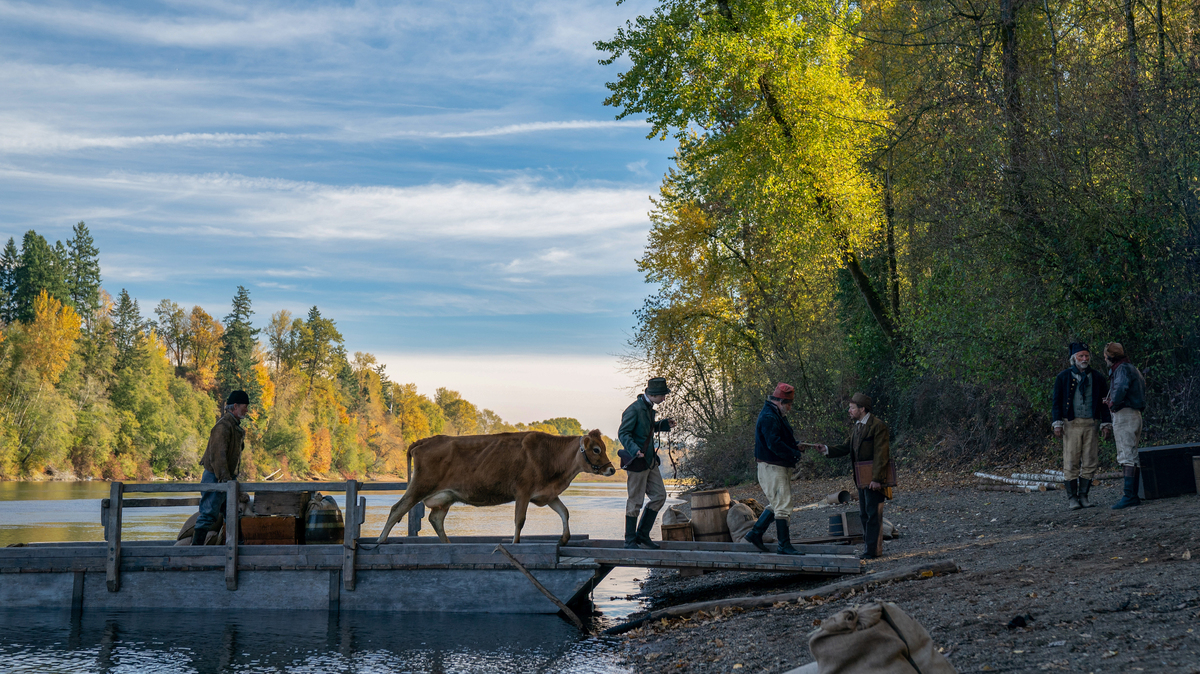 When Greener Pastures Are Unpasteurized: Two men try to start a business in the Oregon Territory in First Cow.

First Cow, writer-director Kelly Reichardt's seventh feature and her fifth collaboration with novelist/screenwriter John Raymond, is as rich and melancholy an expression of the themes that have defined her career as one could ask. It's another unhurried, keenly drawn excerpt of subsistence living in the Pacific Northwest, with the savage mandate of survival butting up against the "civilized" — the quotation marks are Reichardt's — forces of capitalism. Any expectations based on prior Reichardt joints, particularly her rustic relationship drama Old Joy or her harrowing western Meek's Cutoff, prove correct: You'll need to slow your breathing to sync up, or more likely, down with the movie's tempo, but Reichardt rewards your patience with a profound experience that lingers in memory.

After a contemporary prologue involving a discovery on the banks of the Columbia River, Reichardt moves the clock back two centuries, to a time when a growing intercontinental market for gold, beaver pelts and other prizes made the Oregon Territory a land of violent opportunism. Cookie (soulful John Magaro) is a soft-spoken itinerant cook and forager who has taken the unenviable job of keeping a menacing group of fur-trappers fed. He befriends King Lu (Orion Lee), a handsome Chinese ex-pat whose English is better than his own and who does not share Cookie's innate aversion to risk.

The arrival of a bovine to the territory — she's owned by blowhard Englishman Chief Factor (Toby Jones, who calibrates the character's innate superiority perfectly) — allows these two hungry men to launch a small enterprise. Their "oily cakes," confections of fried dough made using milk stolen under cover of night, become a sensation. Everyone who tries them is reminded of home — a detail that feels vaguely supernatural, given the diversity of King Lu and Cookie's customer base. Reichardt makes the point that American industry was built by people from everywhere, all of them hostile to, or dismissive of, the natives, sans underlining. That's not her way.

Chief Factor is so tickled to taste South Kensington in his snack that he hires Cookie and King Lu to prepare a special dessert — a clafoutis — to impress an influential visitor to his home. He wants desperately to demonstrate to the Captain (Scott Shepherd) that frontier life is not without the indulgences these prosperous white men think of as their birthright. Cookie is baffled that it never occurs to his rich employer to wonder where the milk is coming from: "Some people can't imagine being stolen from," he reflects.

'Night Moves' Leaves Too Much In The Dark

'Meek's Cutoff': An Old West, Captured For A New Era

Like Reichardt's earlier westerns — though she's voiced ambivalence about that label — First Cow is shot (by Christopher Blauvelt) in Academy ratio; close to the 4:3 frame that was more common in the early decades of cinema, and in TV for half a century after that, than it is today. She's not one for establishing shots or for ogling the beauty of the forest, nor does she shoot the food Cookie prepares with any palpable gluttony. Her new film is more likely to make viewers feel cold than hungry. She wants nothing to distract from her close observation of the severe nature of these brief, tough lives, and of the tenderness of the friendship that tempers that severity just a little. Although the screenplay Reichardt and Raymond cowrote is adapted from Raymond's 2004 novel The Half-Life, they've discarded, well, more than half of it.

That rigidity of focus is impressive, but it will make First Cow a forbidding sit for some. The 121-minute picture is almost deliberately dull in stretches, vividly conjuring an environment wherein the labor of keeping oneself alive for a single day was occupation enough. (Imagine The Revenant without any of the action-movie stuff, or Deadwood minus Al Swearengen's flights of filthy poetry or, well, women.) Once the gearworks of plot finally turn just far enough to nudge this scenario to a sort of resolution, even audiences conversant in Reichardt's trademark minimalism may feel undernourished. This is the sort of picture that requires the viewer to meet it more than halfway without soothing the mileage of that journey. You might appreciate that sensation or you mightn't, but it was clearly induced by design.