Accessibility links
Trump Ousts White House Chief Of Staff Mick Mulvaney Mulvaney was Trump's third chief of staff - a job he held in an acting capacity in a White House known for its high turnover. Next up: Mark Meadows. 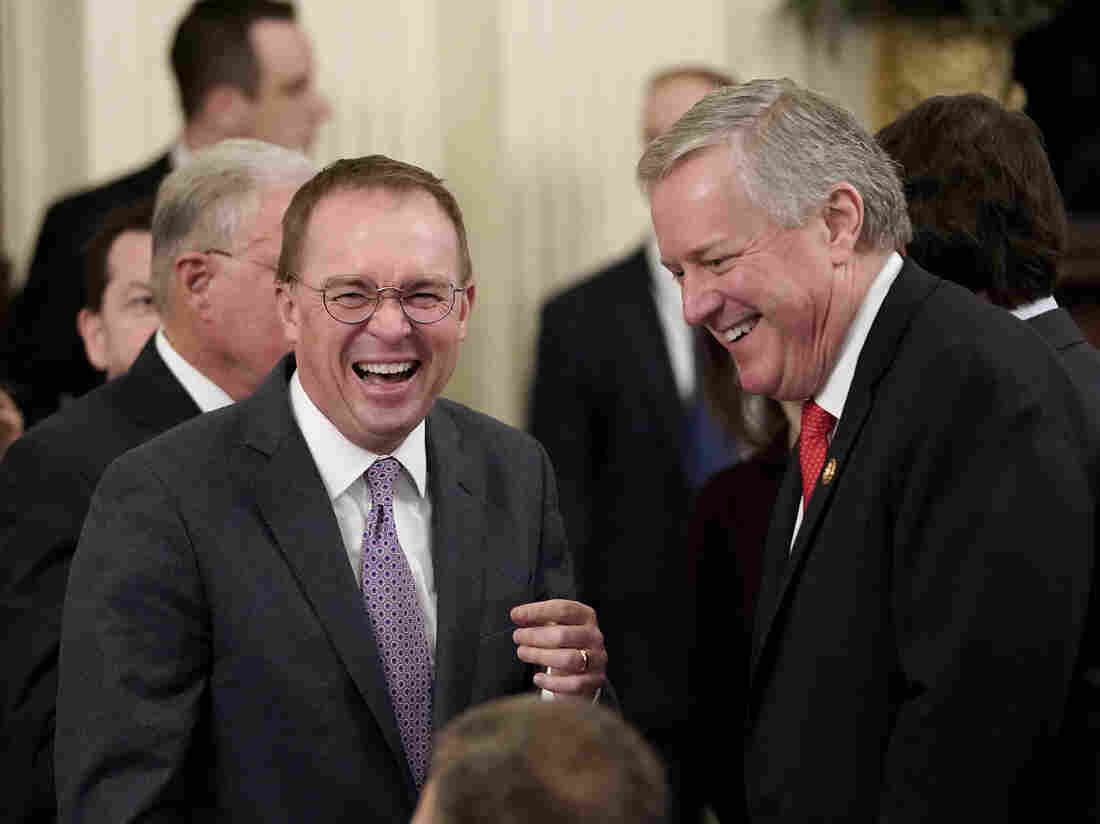 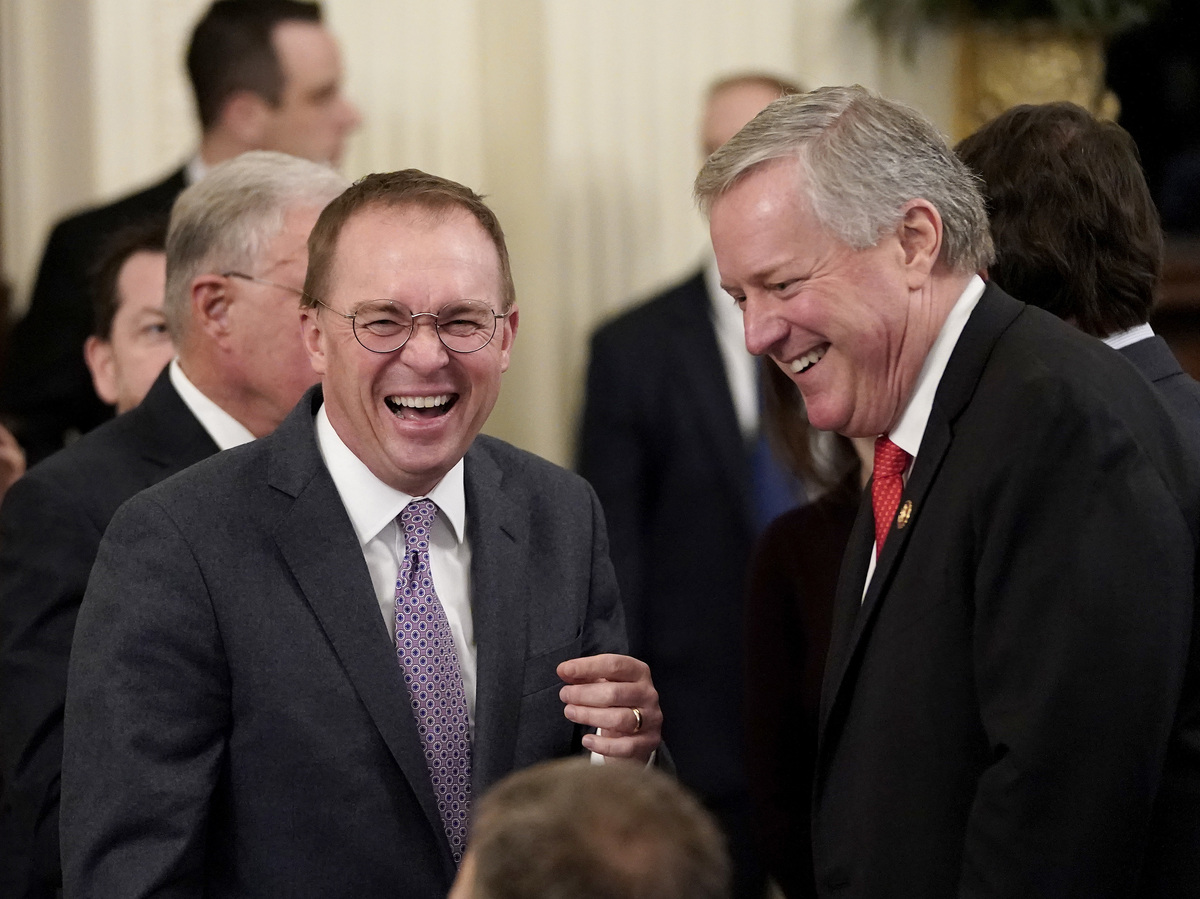 Mick Mulvaney, then the acting White House chief of staff, laughs with Rep. Mark Meadows (R-NC) a month ago at an event celebrating President Trump's acquittal on two articles of impeachment.

For the fourth time in three years, President Trump has a new chief of staff.

With his administration grappling with the response to coronavirus — and just months ahead of the next election — Trump tweeted on Friday night that congressional ally Mark Meadows will be his newest top aide at the White House.

Meadows replaces Mick Mulvaney, who like him, was once part of the House Freedom Caucus. Meadows has come to be one of Trump's closest allies on the Capitol Hill, speaking with him regularly and helping the president keep Republicans in line. He was a staunch defender during Trump's impeachment trial.

....I want to thank Acting Chief Mick Mulvaney for having served the Administration so well. He will become the United States Special Envoy for Northern Ireland. Thank you!

Mulvaney lasted a little more than a year in the job. He became tangled in the Ukraine scandal that led to Trump's impeachment when he put a temporary hold on military and other aid for Ukraine earlier this year at Trump's request.

But it's not all bad news for Mulvaney. Trump tweeted he would join the diplomatic ranks, becoming the U.S. special envoy for Northern Ireland. 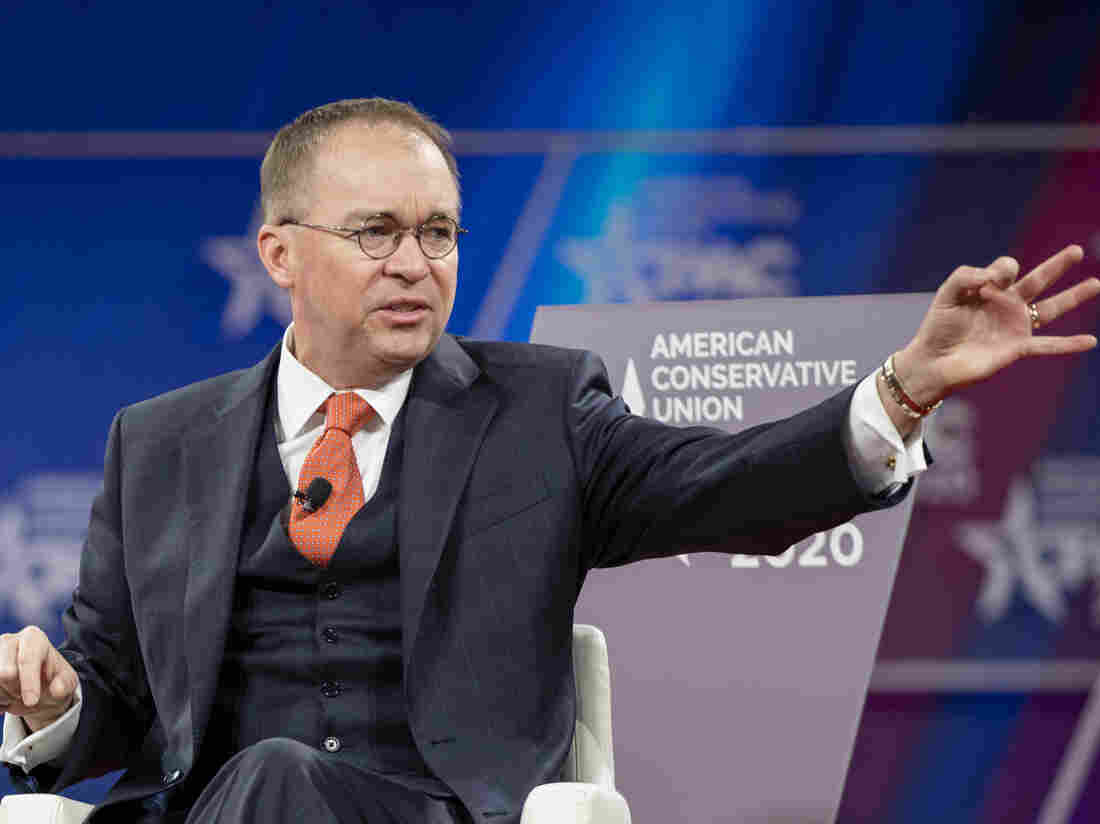 Mulvaney lasted a little more than a year in the top job at the White House. Trump said he will now become the U.S. special envoy for Northern Ireland. Samuel Corum/Getty Images hide caption 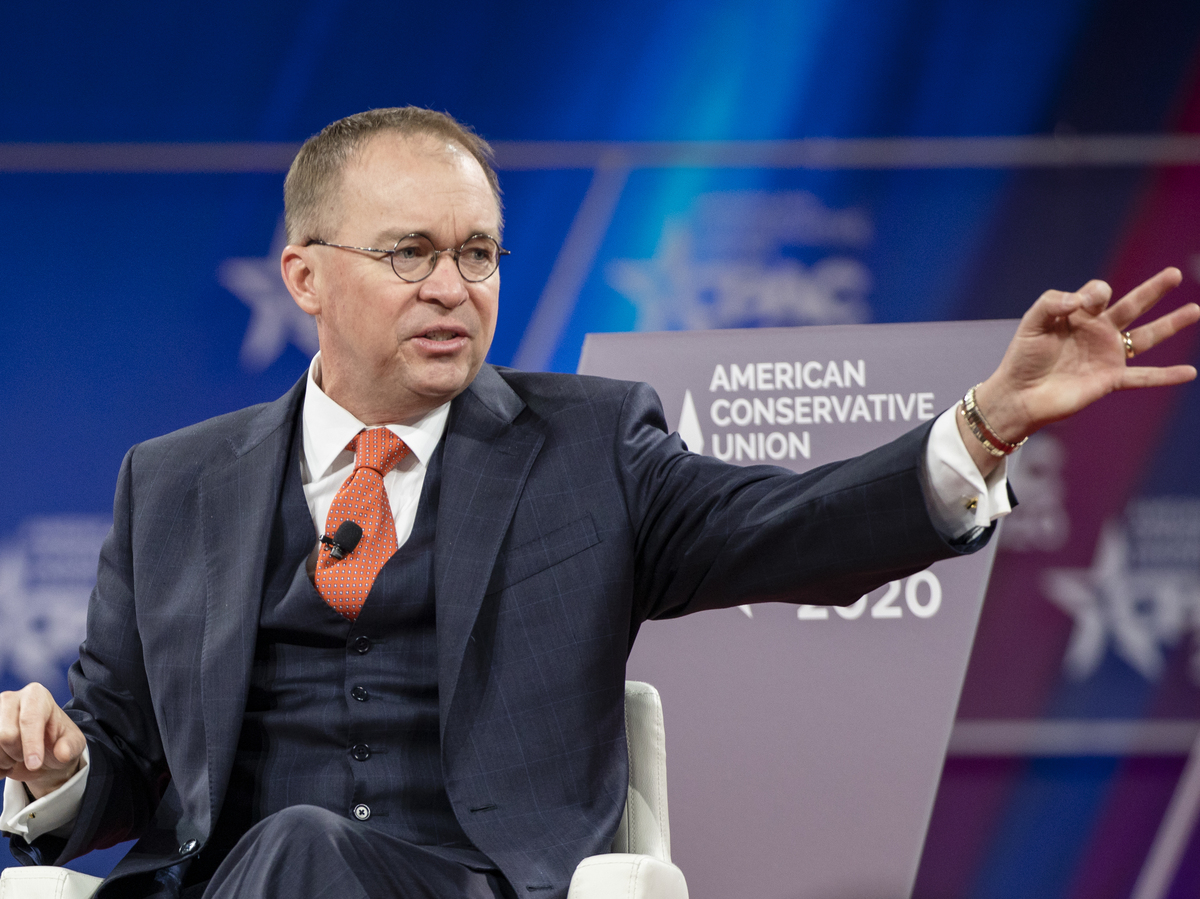 Mulvaney lasted a little more than a year in the top job at the White House. Trump said he will now become the U.S. special envoy for Northern Ireland.

Now on his fourth White House chief of staff, Trump has overseen a remarkable level of turnover in a White House that has been defined by staff shakeups and firings by tweet.

Meadows has been a frequent guest at White House events, and has often traveled with Trump on Air Force One.

"It's an honor to be selected by President Trump to serve alongside him and his team," Meadows said in a statement. "This president and his administration have a long list of incredible victories they've delivered to the country during this first term, with the best yet to come."

Meadows also paid tribute to Mulvaney, calling him "smart, principled, and as tough a fighter you'll find in Washington, D.C." and said Mulvaney "did a great job leading the President's team through a tremendous period of accomplishment." 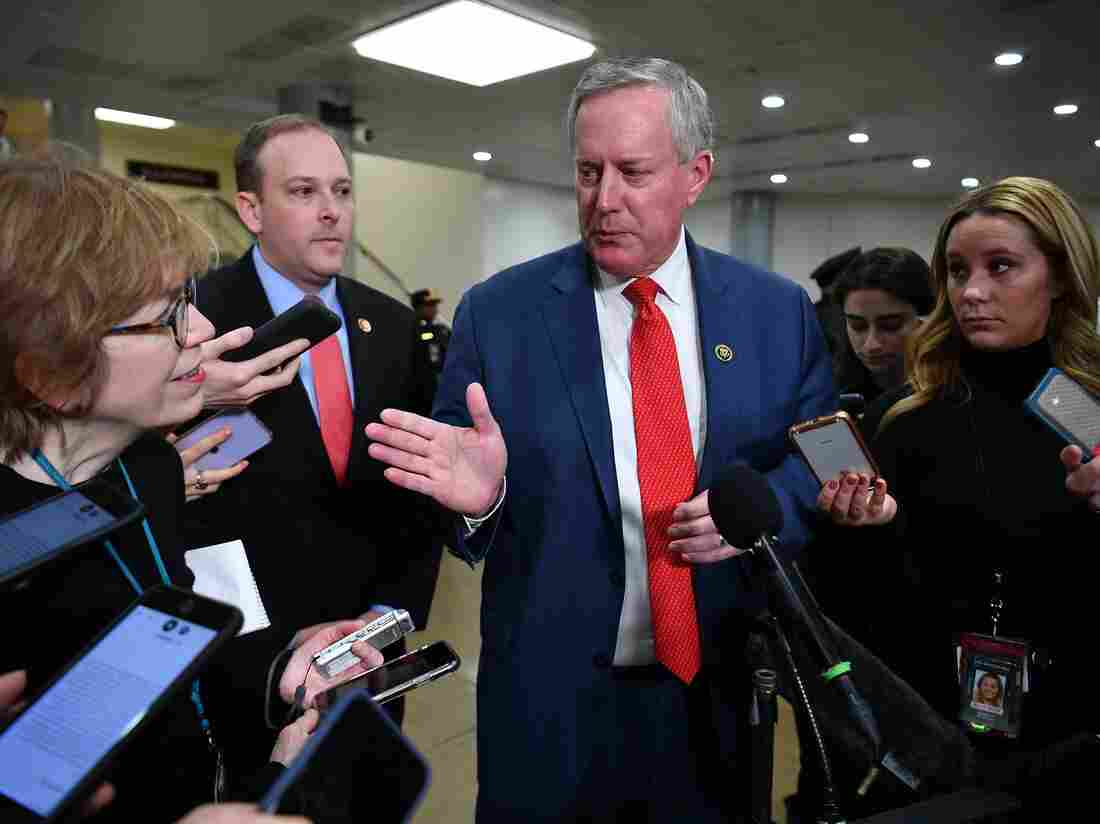 Meadows has been a stalwart defender of Trump on television, particularly during his impeachment trial. Mandel Ngan/AFP via Getty Images hide caption 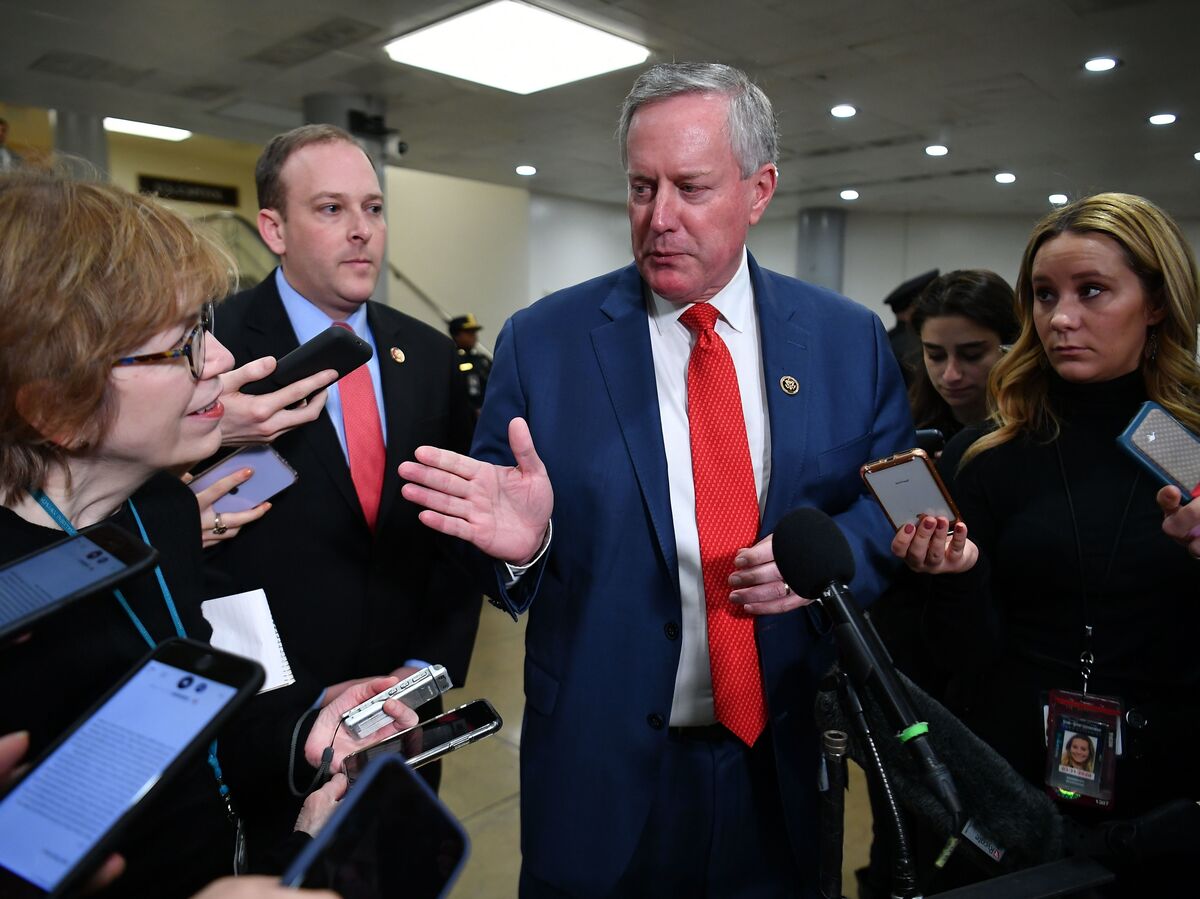 Meadows has been a stalwart defender of Trump on television, particularly during his impeachment trial.

Trump had picked Mulvaney as his acting chief of staff on December 14, 2018, after his first choice to replace John Kelly backed out of the job. Unlike Kelly, a former Marine general, Mulvaney took a more hands-off approach in managing the White House and the various competing factions within it.

Like many Trump officials, Mulvaney labored with an "acting" label in front of his title. Trump insisted he preferred it that way.

Trump's announcement of Meadows' appointment did not include the "acting" qualifier.

Mulvaney insisted the "acting" title didn't matter to him. "It just doesn't make a difference," Mulvaney once told a Wall Street Journal event, taking credit for reducing infighting at the White House. 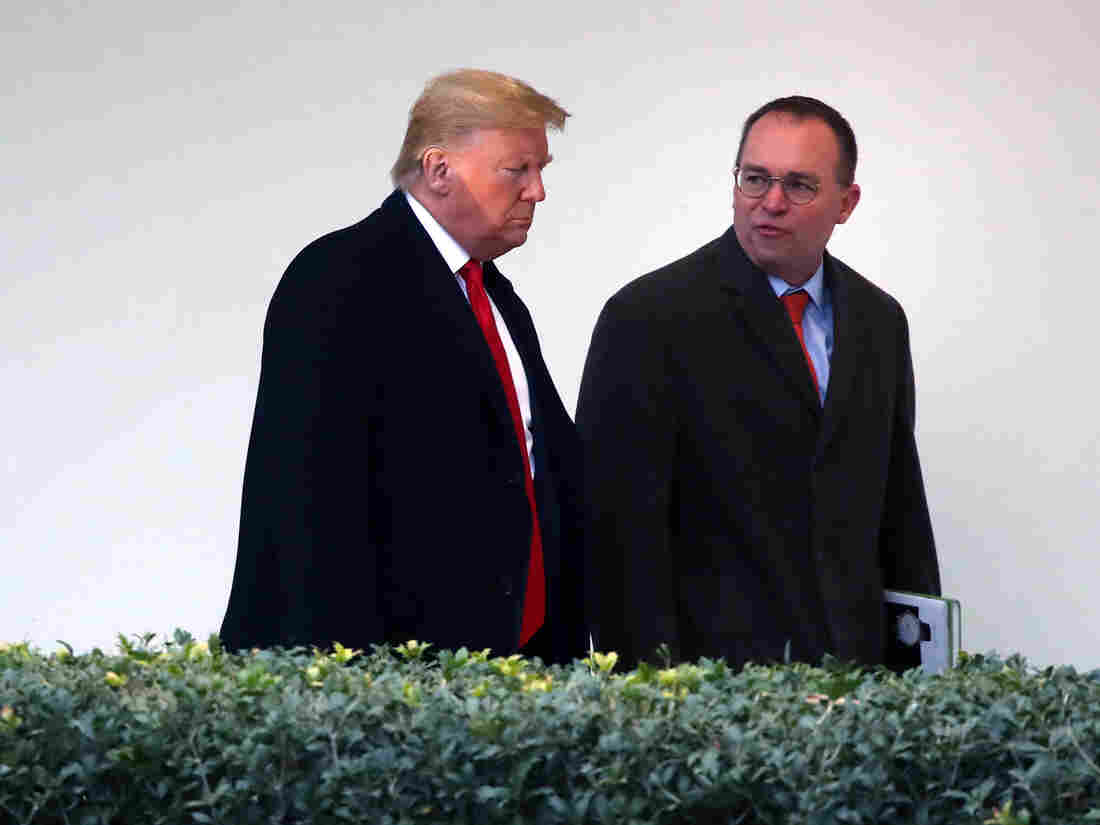 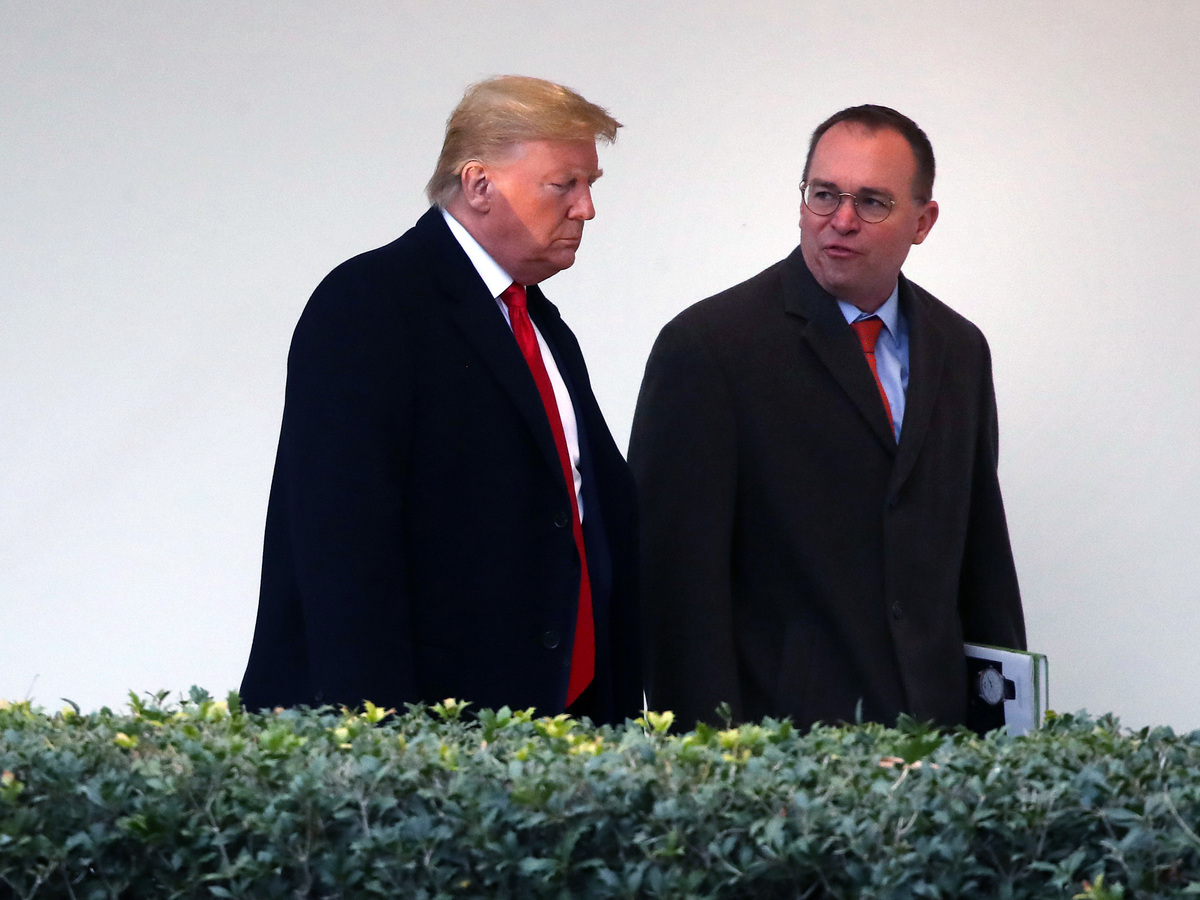 Trump and Mulvaney walks along the West Wing Colonnade in January.

Current and former White House aides say the environment Mulvaney set up as chief of staff was free-flowing and a bit harried at times. One said Mulvaney knows who the boss is and will say things like, 'I've been given clear orders.'

"I'm sort of a mix between the complete, freewheeling, wild, wild west of Reince Priebus and the militaristic, Marine camp of John Kelly," Mulvaney said in the Wall Street Journal interview, comparing himself to his two Trump-era predecessors. "We found a happy medium between those two things."

In other words, he gave a president who seems to thrive on a certain amount of chaos exactly what he wanted, and that worked for Mulvaney and Trump both.

But critics questioned how well it worked for the White House.

"Chaos without a strategy is a prescription for disaster," said Leon Panetta, who was chief of staff during the Clinton administration.

In an interview with NPR in the fall of 2019, Panetta said chiefs of staff have a choice. They can maintain order and protect the president from making bad decisions. Or they simply become "a high-level secretary that's going to do whatever the president wants."

"That's a fundamental decision," Panetta said. "And I think Mulvaney has made the decision that he's going to basically serve as an enabler rather than a chief of staff."

'I Wasn't Naive': Getting Fired In The Trump Administration

Mulvaney first entered national politics in 2010, unseating a long-serving Democratic congressman in a wave of Republican victories that year. He cast himself as a plain spoken Tea Party firebrand, and pushed to constrain government spending from his perch in Congress.

He joined the Trump administration as director of the Office of Management and Budget. On his watch, deficits ballooned due to increased spending and the tax cuts passed at the end of 2017. For part of his tenure, he also served as acting head of the Consumer Financial Protection Bureau, which he sought to substantially rein in.