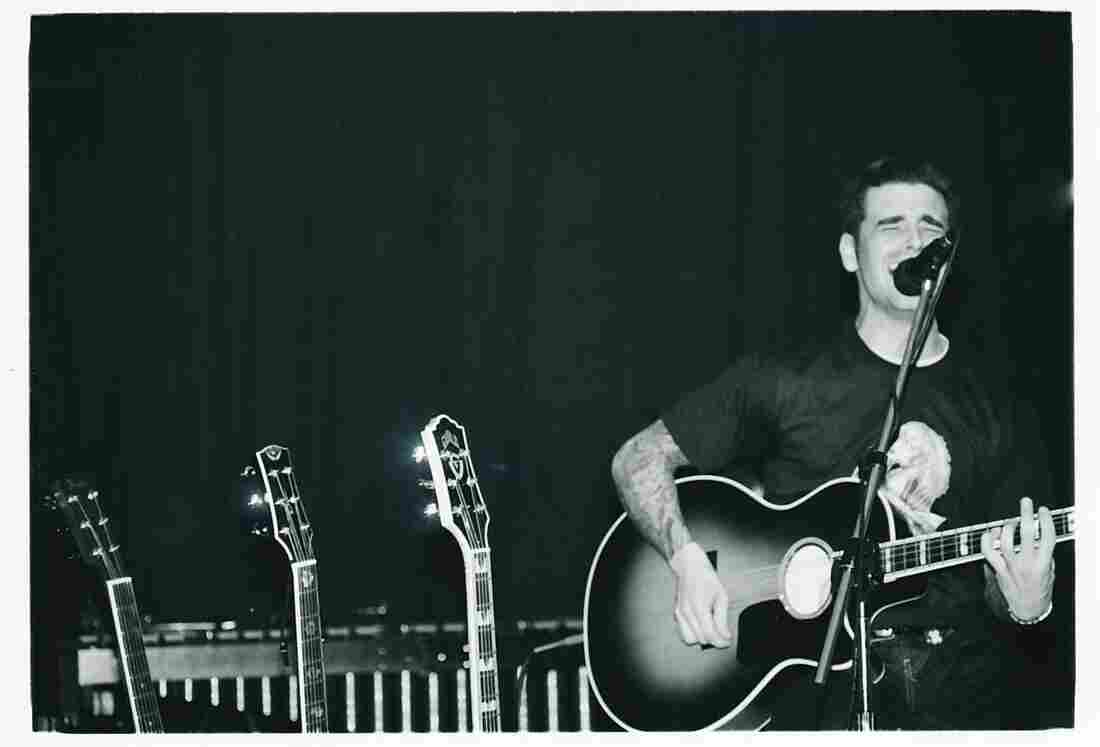 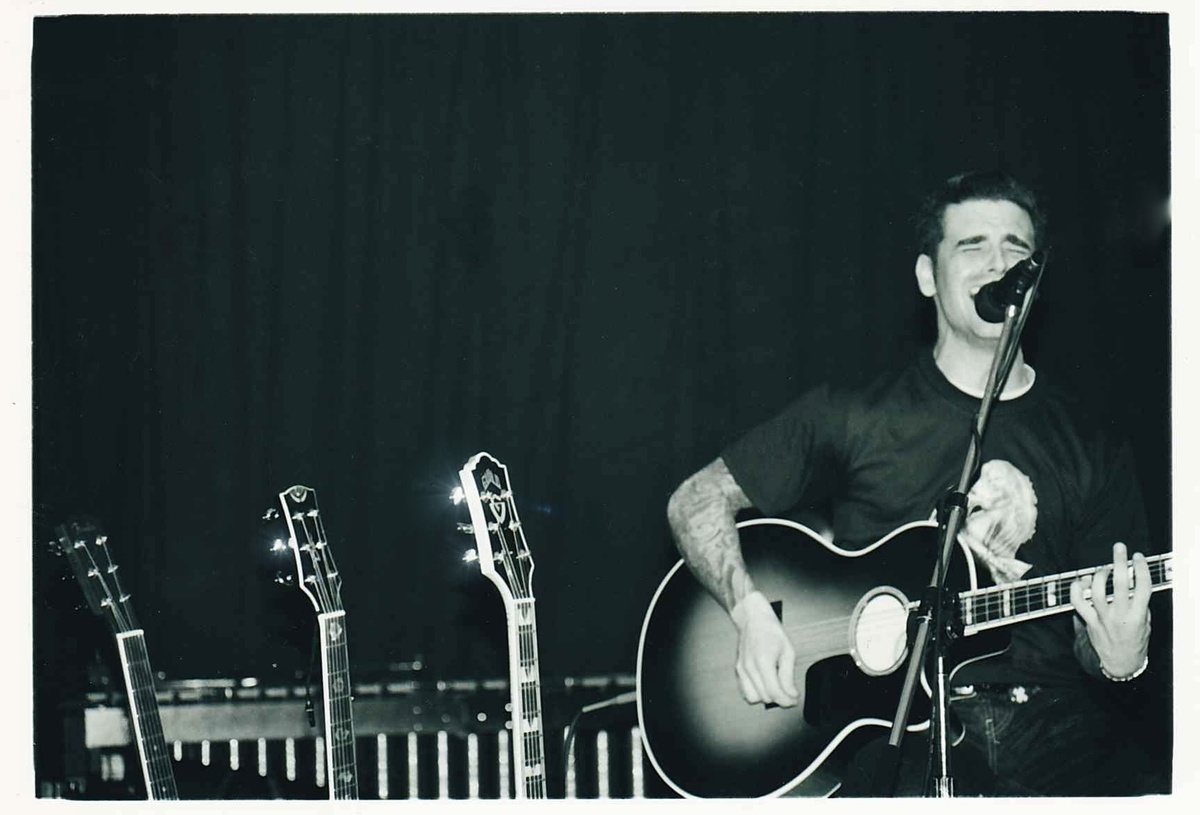 Chris Carrabba performs as Dashboard Confessional in Davie, Fla., circa 2000.

Kelly Kaufman Wisniewski/Courtesy of the artist

In Columbus, Ohio, Dashboard Confessional always seems to blow in with the shift of the Midwest season. That shift takes longer these days, what with the injured planet; the heat and humidity can lap at the edges of the nighttime well into September, sometimes early October. At the height of these in-between moments — in early spring, where a person walks out of a house and immediately realizes they are either underdressed or overdressed, or later, as the summer slowly undresses itself down to the bare fluorescence of autumn — Chris Carrabba and his band arrive, usually playing one of the first or last outdoor shows of the year.

He comes to Columbus so much because he loves it, he assures us. A few summers ago when the Cavs and Kyrie Irving hit an impasse, he stepped to the mic and told the crowd that we had to do all we could to keep Kyrie here in town. No one told him he wasn't in Cleveland, and I suppose that's one way to return affection. But when Carrabba brings his songs to town, me and everyone I know go to see him — even though we know exactly what we're getting, and how we're getting it.

Granted, his speaking voice has taken on a deeper Southern affect, and he's more prone to point out that he and his band are just a bunch of workin' stiffs, lucky to be playing anywhere. His singing voice is gentler, more patient, not always sniffing for the chance to accelerate to a buildup. And to those who have long loved his songs, he has finally become visually unrecognizable: Once known by his boyishly clean face and immovably gelled hair, he now wears a thick beard, his hair swooped to one side and sometimes tucked underneath a hat with a brim so wide it borders on comical. If even those small changes feel jarring, it's because many of us have only known Carrabba in a few modes — most of them built around his introduction in 2000, when he recorded and released his first album, The Swiss Army Romance.

Whether the emo music of the 2000s and its many offshoots have done more harm than good is in the eye of the beholder. If I'm weighing my damage as a fan, I don't think I can say that I've broken even: So many songs from the years when I loved this music most feel less approachable to me today for the recklessly imbalanced lens they place on relationships. I'm not as jaded or as angry as I used to be, and my pathways to cynicism are found outside of music these days. But it helps that in Dashboard songs, the beloved rarely becomes the enemy. The enemy is the mess of emotions that one cannot unravel themselves from — and even then, through the unraveling, the enemy becomes beloved. I loved this album then, and do now, for how it opens: A body wrapped in a blanket, an absence aching for anyone to fill it, the remnants of a person and how they can haunt a once shared space. "Screaming Infidelities" is an overly earnest breakup song, but it works because of how actively pained Carrabba sounds while singing it.

The Swiss Army Romance, released in March 2000 by the tiny Florida indie Fiddler Records and later given a wide reissue, was the emo of its era distilled to its core purpose — music made to mine and dissect one's own emotions. Even if, through that process, nothing about them is found to be spectacular, this music relied on the understanding that the very having of emotions was a spectacular feat — that if you missed someone or loved someone or lost someone, it meant you were alive and could shout about the trembling nest of feelings in your corner of this endlessly spinning rock. Carrabba unlocked this concept early, and has leaned into it heavy throughout his career. On his debut, using an acoustic guitar and his voice and little else, he focused most closely on the mundane — the small and specific heartbreaks and excitements that, when accumulated, make up a lifetime of feelings.

20 Years After She Unplugged For MTV, Shakira Taught Me To See Myself

Musically, the album oscillates between hushed and urgent. The title track is a tug-of-war between the guitar and dual-tracked vocals that sound like they could be coming from anywhere and everywhere. "Again I Go Unnoticed" pulls off a similar trick, Carrabba relying on volume and pace to express himself at his most aggrieved, or most isolated. When he turns more longing on "Shirts and Gloves," the guitar is gentler and the singing is near a whisper, easily stitching the lyrics along each note, rather than shouted in delightfully haphazard bursts.

The articulation of anguish is a skill, especially if one is willing to admit somewhere along the line that the emotional room they are trapped in is at least partly a room of their own making. There are songs here where the narrator celebrates the idea of running home into the arms of a loved one, but they tend to stop short of him walking through the door. There are songs about the treacherous feeling of needing to rely on someone else to keep yourself alive. The artist's true gift through it all is that he sounds believable, but not convinced that there's anything better for him on the other side of emotional upheaval — like someone repeatedly pressing on a wound until it opens wider along their skin. 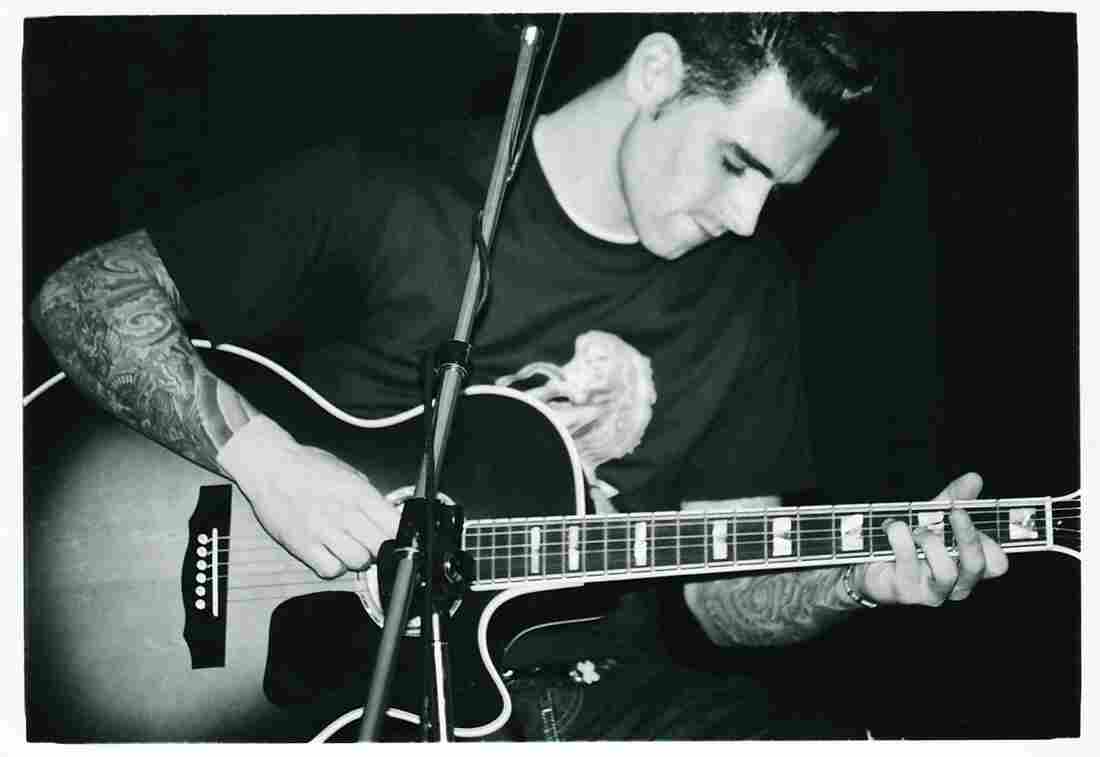 Enlarge this image
Kelly Kaufman Wisniewski/Courtesy of the artist 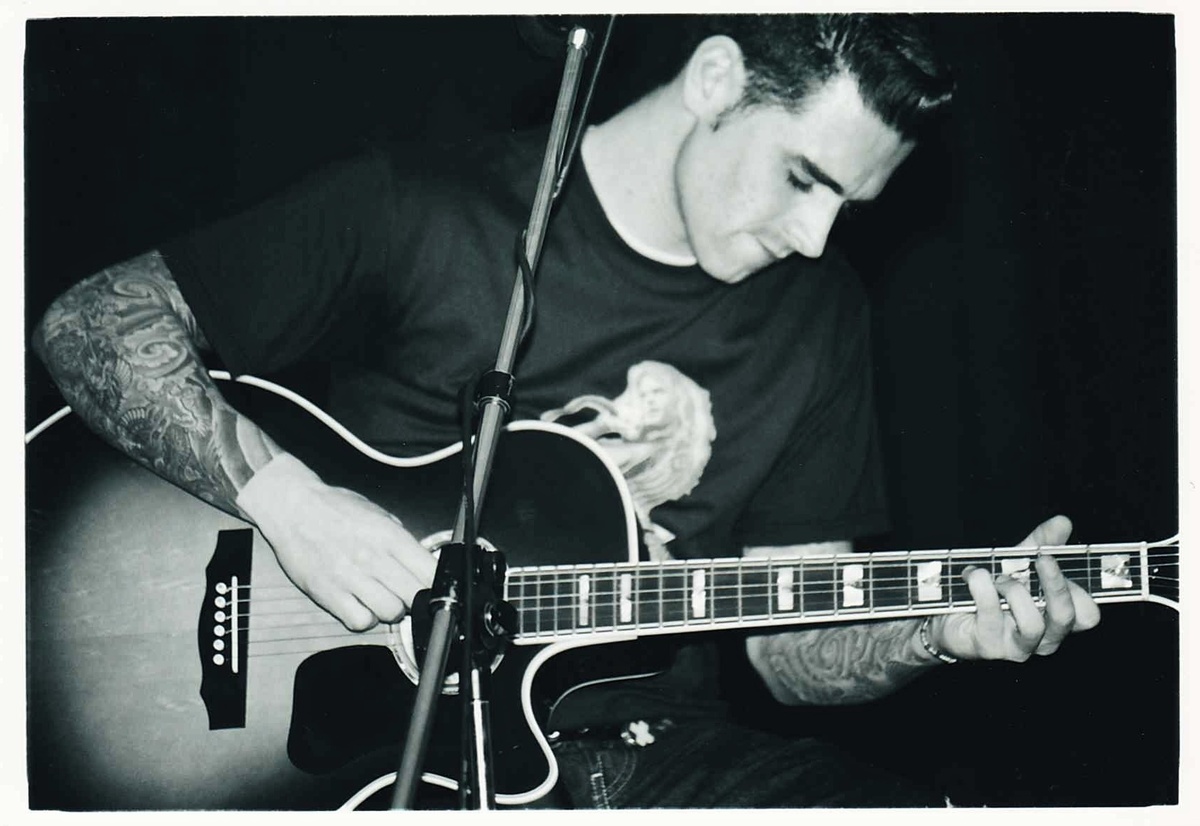 Kelly Kaufman Wisniewski/Courtesy of the artist

Carrabba will be 45 this year, and he's stayed relevant enough to be able to control his legacy in a way that many artists can't. In January he released The Best Ones of the Best Ones, Dashboard Confessional's first greatest hits record — which mixes polished album tracks with songs as they appeared on early EPs and in the band's live session for MTV Unplugged, giving those versions the chance to be definitive. Last summer, he unveiled Now Is Then Is Now, a series of three albums from the band's electrified middle period (2003's A Mark, A Mission, A Brand, A Scar, 2006's Alter The Ending and 2009's Dusk And Summer) reimagined as bare solo recordings.

A cynic might chalk these nostalgic moves up to a cash grab, but a close listen to the Now Is Then Is Now re-recordings reveals that the songs take on a different sensibility entirely. There is a heightened focus on the language, no longer limited to the delivery of information. The breathless pauses sound like the artist consciously practicing the art of anticipation, not just standing on the edge of a cliff begging to be pulled back. The songs, in this new form, feel like an exchange. In "Stolen," when his voice splits into a chorus of voices for the line "We all look like we feel," the "we" feels wider, more understanding and welcoming – an open doorway instead of a closed window to peer through. Of the bands from this era that have survived, there are some who have grown and rightfully disowned old tunes, and others who cling to that material fearing that without it they'll have nothing left. Somewhere in the center of that is Chris Carrabba, retooling and refining his work for another era where he's not the same person he once was.

If Carrabba's retreat toward patience, stillness, and silence is a corrective to wearing so much on his sleeve with such ferocity for so long, may we all have the chance to do the same, as artists and as people. (I am already thinking of the sentences I've written today that I might happen upon in a month or a year and cringe at.) But as long as he wants to sing the same songs that he sang when he was a heartthrob in his 20s, his voice nearly drowned out by the crowd's shouting, I'll probably be there for that, too — because there is a unique generosity to the ways he has remained familiar.

To see him perform now is to see him as I always have, no matter how long he grows his hair. He still comes to the same Columbus venues he has for years. He still fits his full band onstage, directing the action with looks, nods and winks like any skilled band director. When he performs "Hands Down" and gets to the line "We're doing fine," he still kicks back from the mic, throws his head down, lets his arm dangle near-lifeless by his guitar for just a moment while the audience picks up the rest of the lyric — "We're doing nothing, at, all" — and then jumps back to life, propelled by their voices into the heat of the chorus. Even after he's grown more introspective, even after he's changed his look, even after he's acknowledged his age and all of the ways he's not the same, he still looks as excited to play the old hits as people are to hear them.

Every year, when I drag my pals to the Columbus Dashboard show, we talk about how maybe this is the time it won't work. Maybe the magic has worn off. I'm not listening to "Screaming Infidelities" every day in my car like I did when I was 16, when the song carried me on the circular highway after my first real breakup, when I drove until I nearly ran out of gas. We aren't all searching for the worst or best feelings to shout out of every open window anymore. But though I didn't know or understand it at the time, what I loved about Dashboard then is what I still love about it now: the idea that when heartbreak or emotional upheaval strike, no one is promised a reprieve. The only promise is that there might be more to come, and you've just gotta find a way out of it when you can.

So, yes, it still works. Everyone, outside in a Columbus night that is maybe too hot or maybe too cold, still sings along. When Carrabba tells the audience that he's going to play a new song, there's a silent understanding that this is where we will check our phones or wander around until the first few notes of a song we know kick back in. It's selfish, of course, but nostalgia is a tool for the selfish, and there's a portal to emotional agelessness that opens within the songs we all know. When I was young and endlessly seeking, the project of feeling things out loud felt like one of life's greatest burdens. Looking back, that feels a little foolish — but there's something I like about being reminded of that foolishness. I think Chris Carrabba can relate.

Hanif Abdurraqib is a writer and poet from Columbus, Ohio. His latest book is A Fortune for Your Disaster.