Accessibility links
Elizabeth Warren Exits The Race, Unable To Break Through Warren occupied an awkward place in the field. She was popular enough to draw those big, loud crowds but wasn't able to mount a serious challenge to the front-runners. 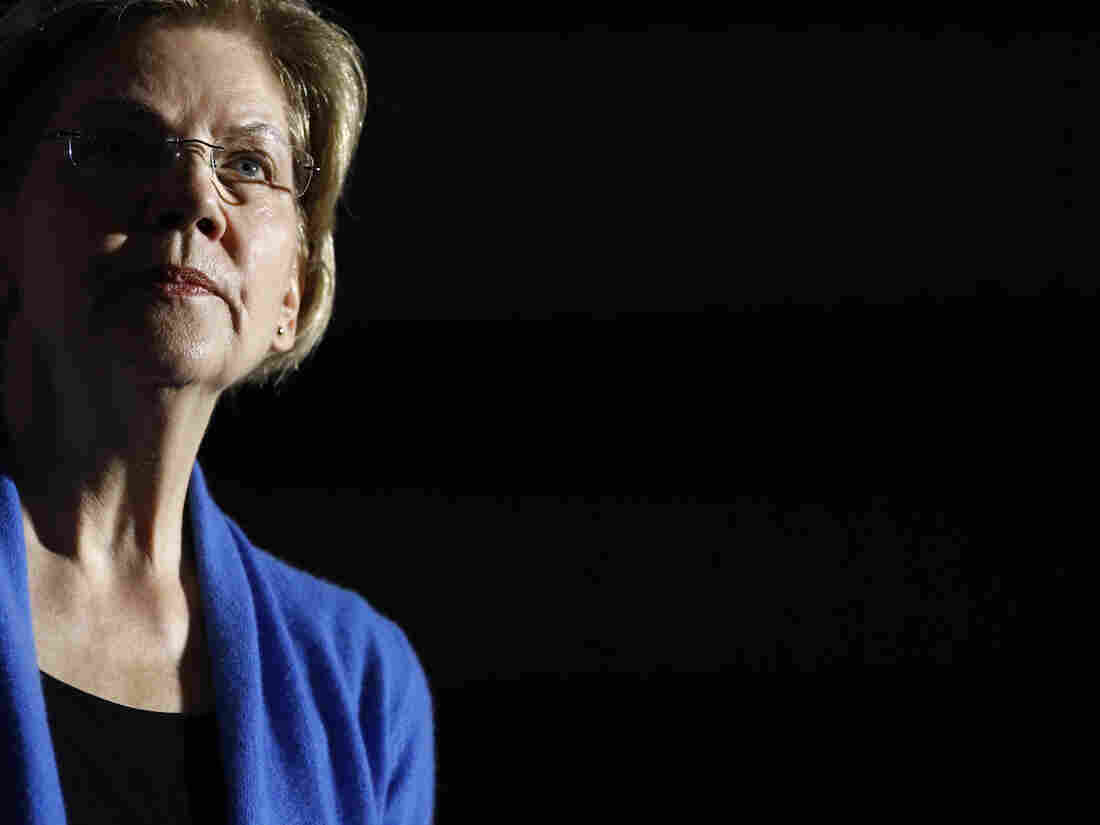 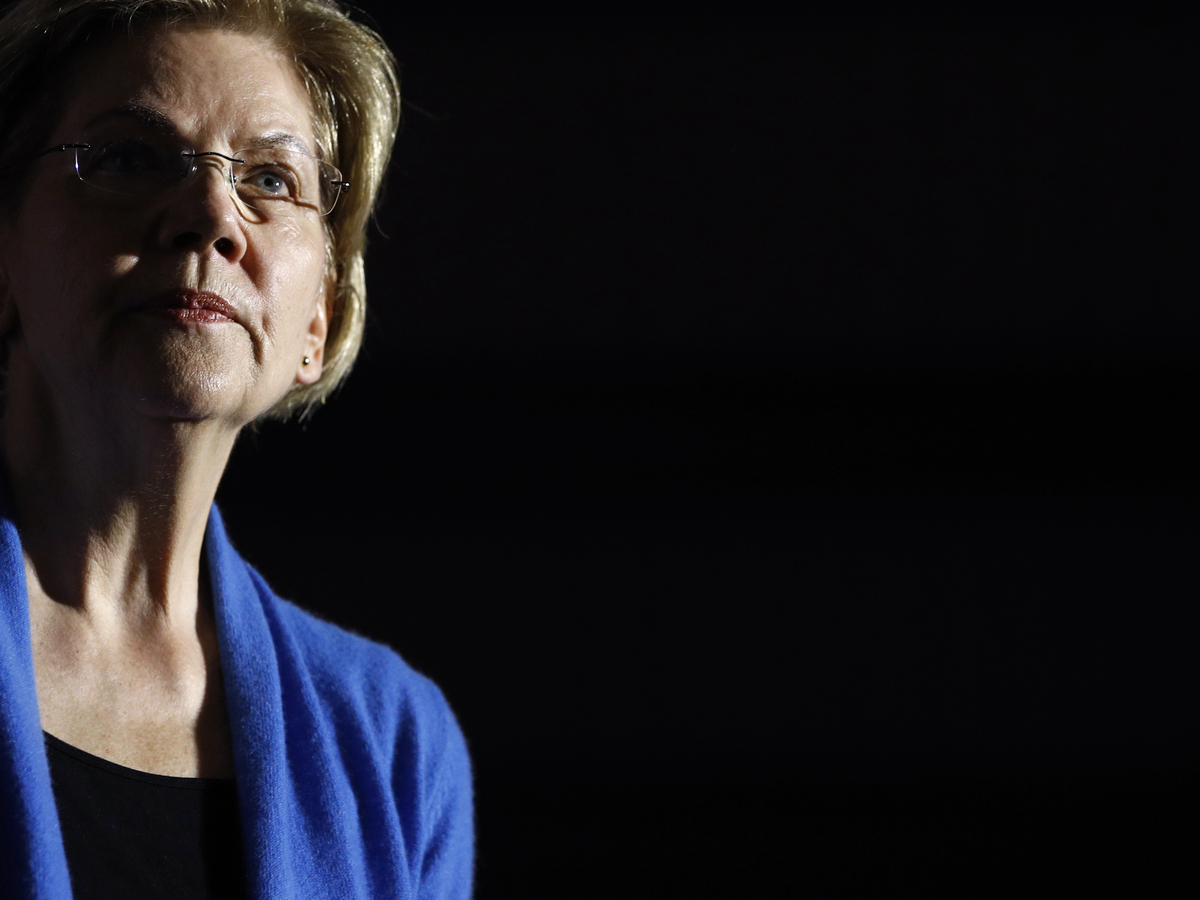 To the very end, Elizabeth Warren had a plan for that. In her last days as a candidate, she was still releasing new plans — including a coronavirus plan she outlined in Houston on Saturday night, even as disappointing results came in from South Carolina.

That focus on laying out proposals inspired devotion in her legions of supporters, like Maryanne Schuessler — who was a volunteer in Warren's Columbia, S.C., office.

"She's so well-planned," she said, sighing sharply. "God! It's — I don't think she's going to do very well in this primary. And it breaks my heart."

In her final week on the trail, before dropping out on Thursday, it was clear that Warren's plans — not just what was in them, but the fact that they existed — inspired deep trust among her supporters even as her path to the nomination looked narrow.

Amber Schafer works in health insurance sales for a living, and she showed up at a Warren event in Columbia, S.C., the day of that state's primary. She said she was definitely voting for Warren — even though "Medicare for All," which Warren backs, would virtually eliminate private insurers (bad news for an insurance saleswoman). But Schafer had faith that a President Warren would be able to help deal with job losses.

"Would it mean that lots of people have to look for different kinds of jobs? Absolutely," she said. "But I think that she definitely has an idea that that's the thing that's gonna happen." 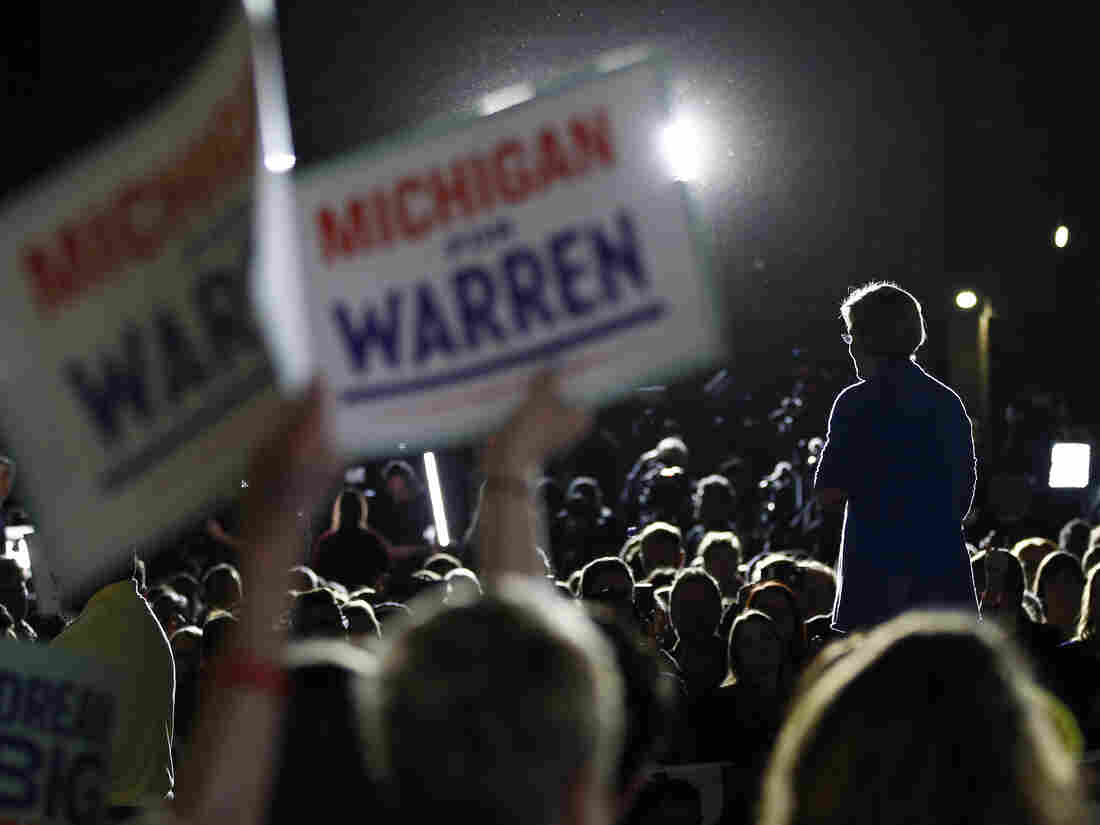 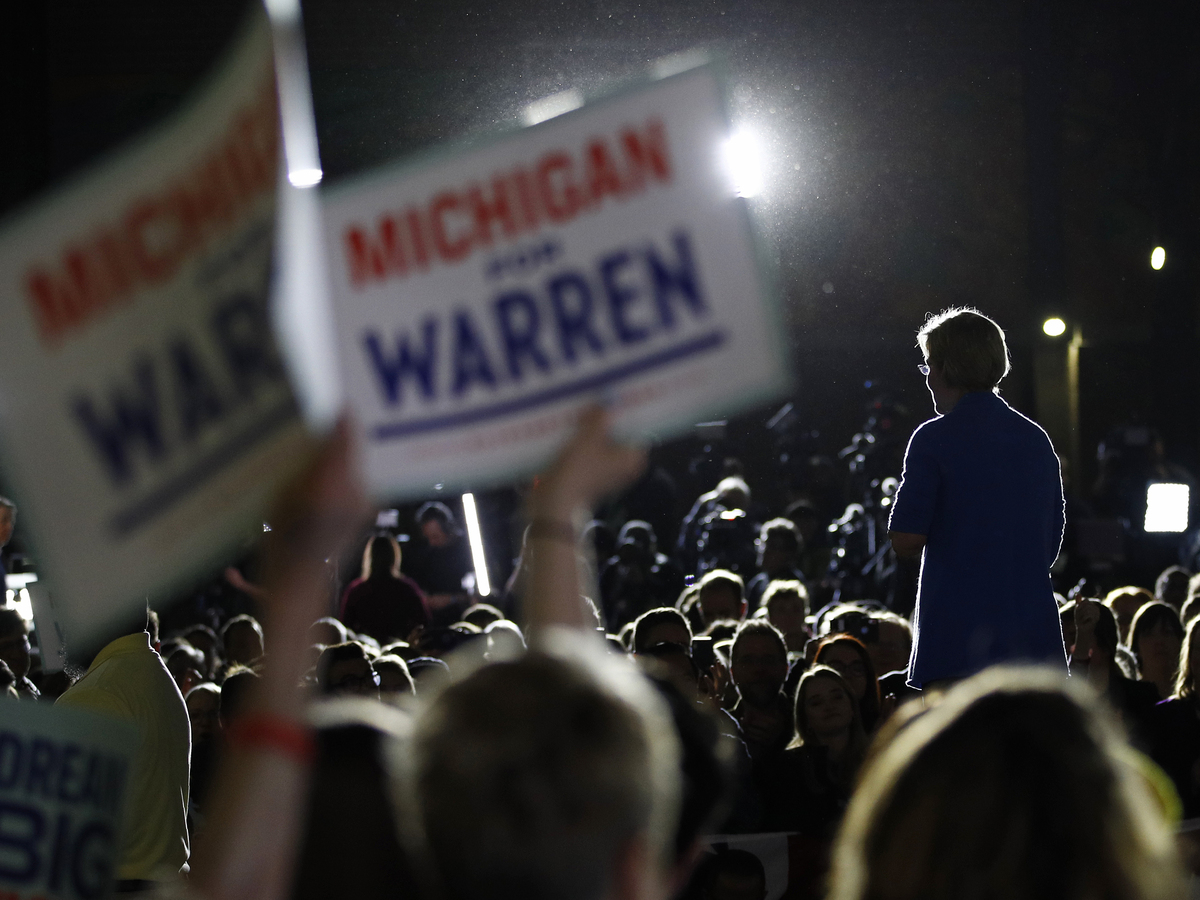 Supporters hold up signs that read "Michigan for Warren" as Sen. Elizabeth Warren speaks in Detroit on Super Tuesday.

And yet, plans ended up at one point being a major weakness for Warren. She co-sponsored Bernie Sanders' Medicare for All plan — which didn't contain a detailed way to raise revenue — and ran on it. So as people awaited her plan to pay for it, she became a target of opponents like Pete Buttigieg in debates.

"Your signature, Senator, is to have a plan for everything — except this," he chided her at a September debate.

Those weren't the only reasons she failed to win over a broader coalition of voters. In addition, her progressive politics were simply too far left for some Democrats. And she was never able to gain the traction she needed among African Americans and Latinos.

Warren supporter Yvie Siferd, who saw her in Detroit on Tuesday, had other ideas why she thought Warren came up short. She listed those factors as she saw them: "Misogyny. Name recognition. A battle for the middle right now, and I think that's kind of where people have been focused."

Figuring out exactly how much her gender, in particular, affected her run will be the stuff of months — or years — of study. There is already some analysis showing that sexism hurt female candidates in this Democratic field. 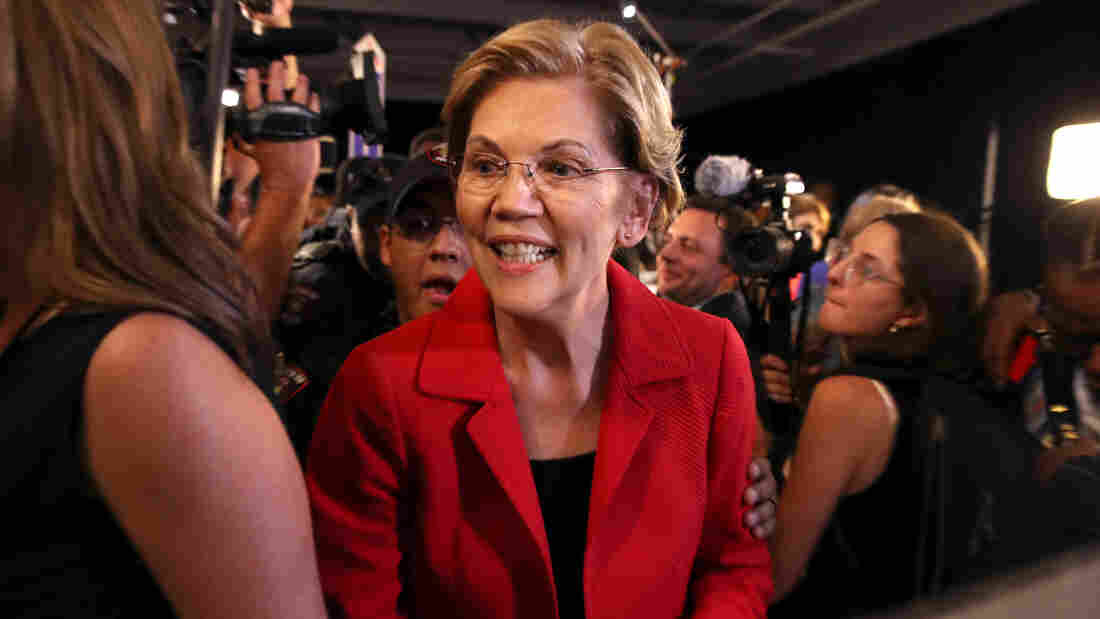 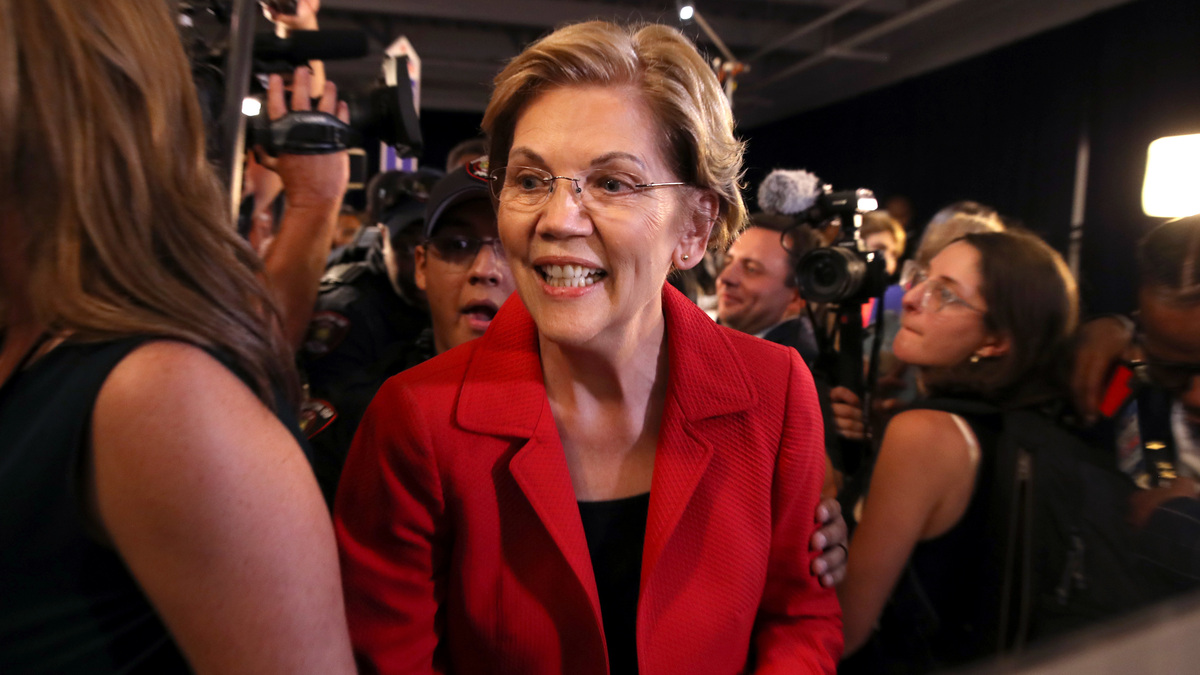 But for now, it is abundantly clear that gender played a role in this election, in part, in the form of fear among Democrats. One thing that came up on the trail was concern among some voters that other voters would prefer a man.

Standing in line to vote this week, UCLA student Brooke Rosenberg said she had that fear.

"I really like Elizabeth Warren but I just don't think a woman is going to win this election, unfortunately," she said. "Also, I don't want Trump to tear her down."

Warren Declines To Endorse, Talks About Support From 'All Those Little Girls'

How Russia Is Trying To Boost Bernie Sanders' Campaign

Rosenberg added that Warren was her first pick and that she also liked Sanders, but was instead voting for Joe Biden.

Warren called out this kind of strategizing in her final campaign trail appearance, in Detroit on Tuesday night, telling voters to stop trying to think like pundits.

"What I see happening is a lot of folks trying to turn voting into some complicated strategy," she told the crowd. "But prediction has been a terrible business, and the pundits have gotten it wrong over and over."

"So here's my advice. Cast a vote that will make you proud. Cast a vote from your heart. And vote for the person you think will make the best president of the United States," she added, to roaring applause.

Warren occupied an awkward place in the field. She was popular enough to draw those big, loud crowds — she pulled in 3,000 people in Los Angeles on Monday night and 2,200 in Detroit on Tuesday. She was also effective on the stump — her campaign speeches persuaded people like Tamika Thompson to vote for her. Thompson went to a Greenville, S.C., stop undecided. Afterward, she knew.

"A lot of the candidates have been just kind of reaching, grabbing for black votes, but not really talking about black people," she said. "So it was important to me that she seemed genuine. She seemed serious. So I think I've made up my mind."

Warren was the only candidate to present a prolonged challenge to Sanders and Biden in national polls. And she was an acceptable second choice to many Democratic voters. 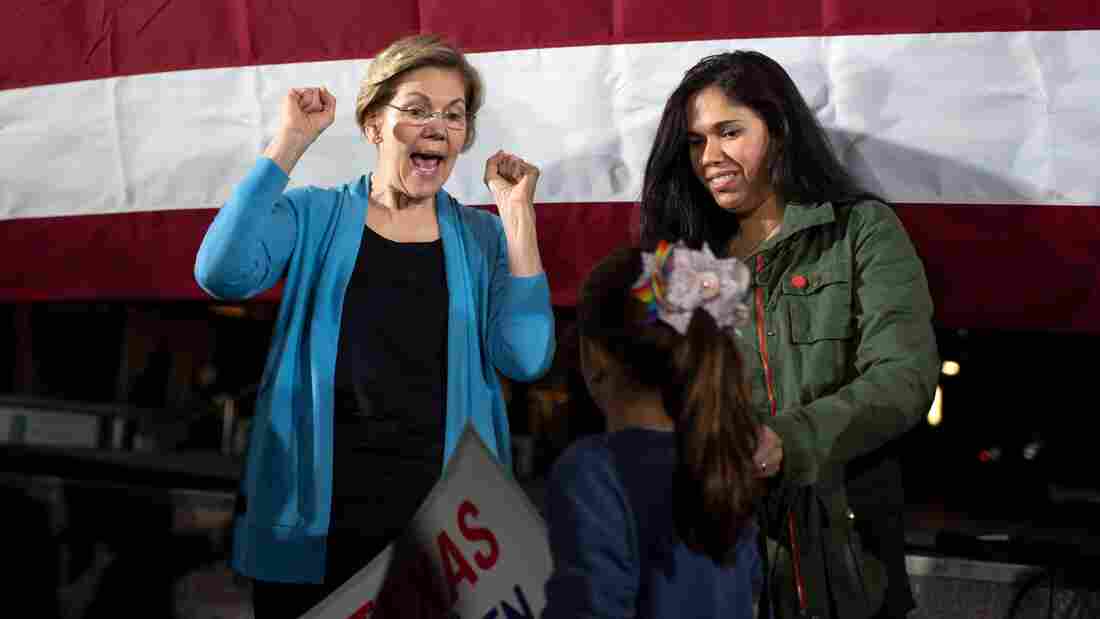 Warren meets her supporters after a town hall at Discovery Green in Houston on Feb. 29. Mark Felix/AFP /AFP via Getty Images hide caption 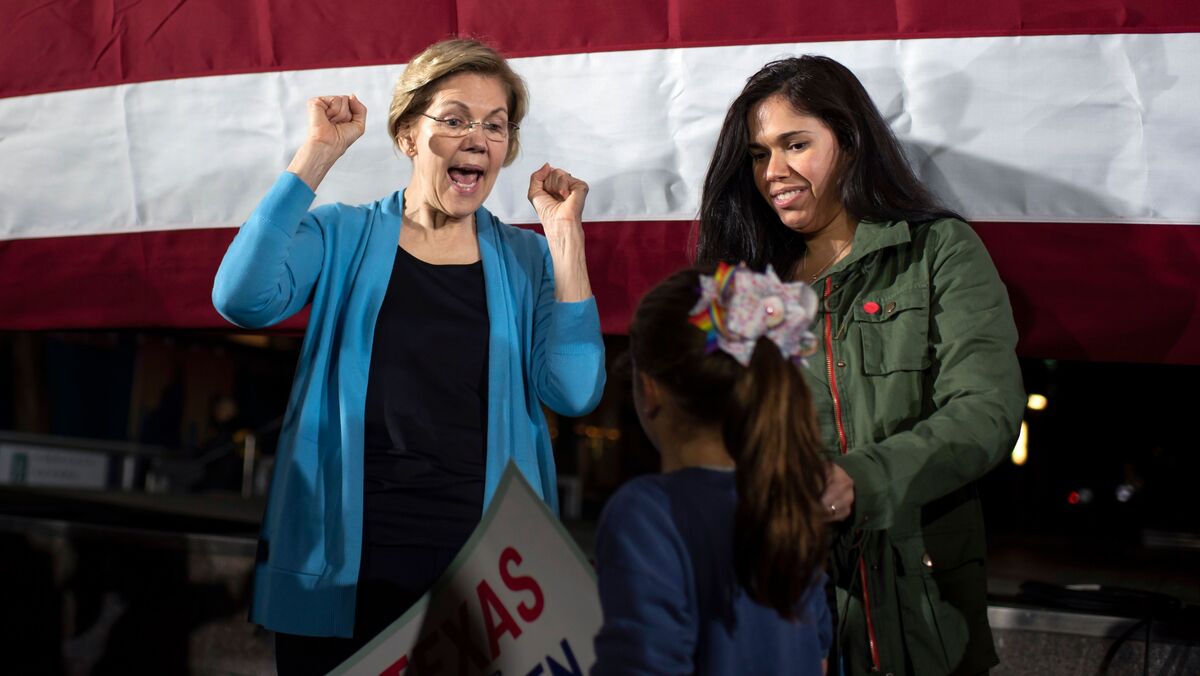 Warren meets her supporters after a town hall at Discovery Green in Houston on Feb. 29.

But that doesn't help much in the end. When voting rolled around, she was never able to mount a challenge to her more popular opponents.

Most of Warren's events ended the same way: with the so-called selfie line.

Genevieve Chavez got a photo in Houston. "All right! I'm so excited!" she yelled. "Vote for blue, no matter who, but I wanted to meet Sen. Warren."

Even as Warren's campaign faltered a few states away, that line stretched around the park. But Chavez was fine with the experience.

"Actually, I didn't have to wait in line too long. I was fortunate to come early today," she said.

"I didn't know I'd be able to take a photo with her," she added, her voice quavering.

Warren's campaign reports that she took more than 100,000 photos with voters.