Accessibility links
Trump Visits Tornado-Ravaged Tennessee At least 24 people died and dozens more were injured in the storms across the state earlier this week. On Friday, the president visited some of the hardest-hit areas with a message of hope.

'We Love Them': Trump Tours And Consoles Tornado-Ravaged Tennessee

'We Love Them': Trump Tours And Consoles Tornado-Ravaged Tennessee 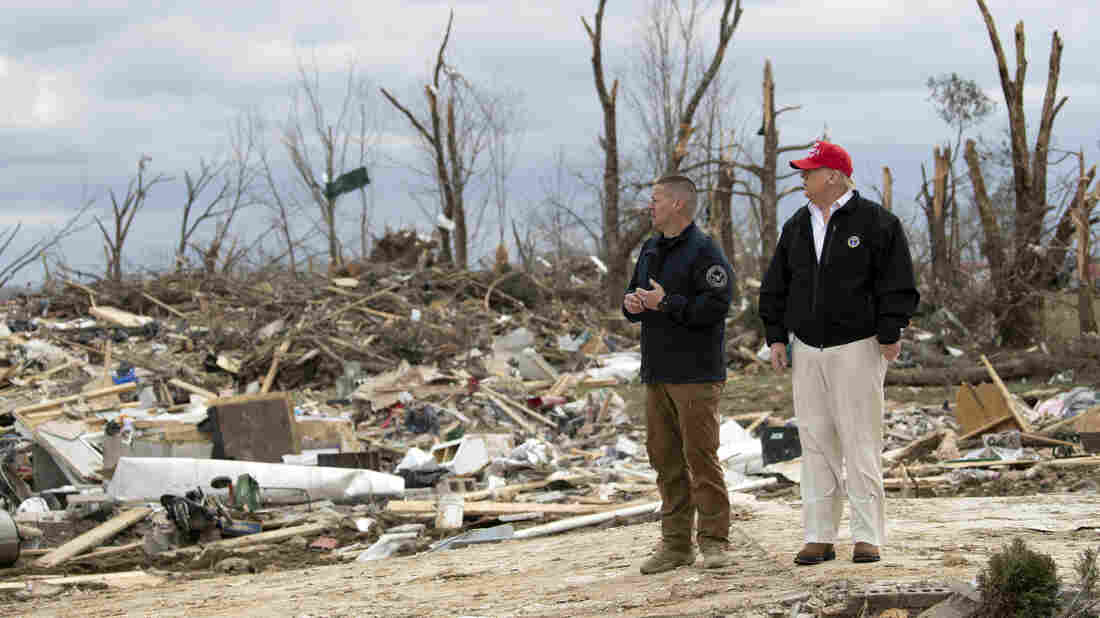 President Donald Trump speaks with a Putnam County rescue worker as he tours the damage left by the tornadoes in Cookeville, Tenn. Alex Brandon/AP hide caption 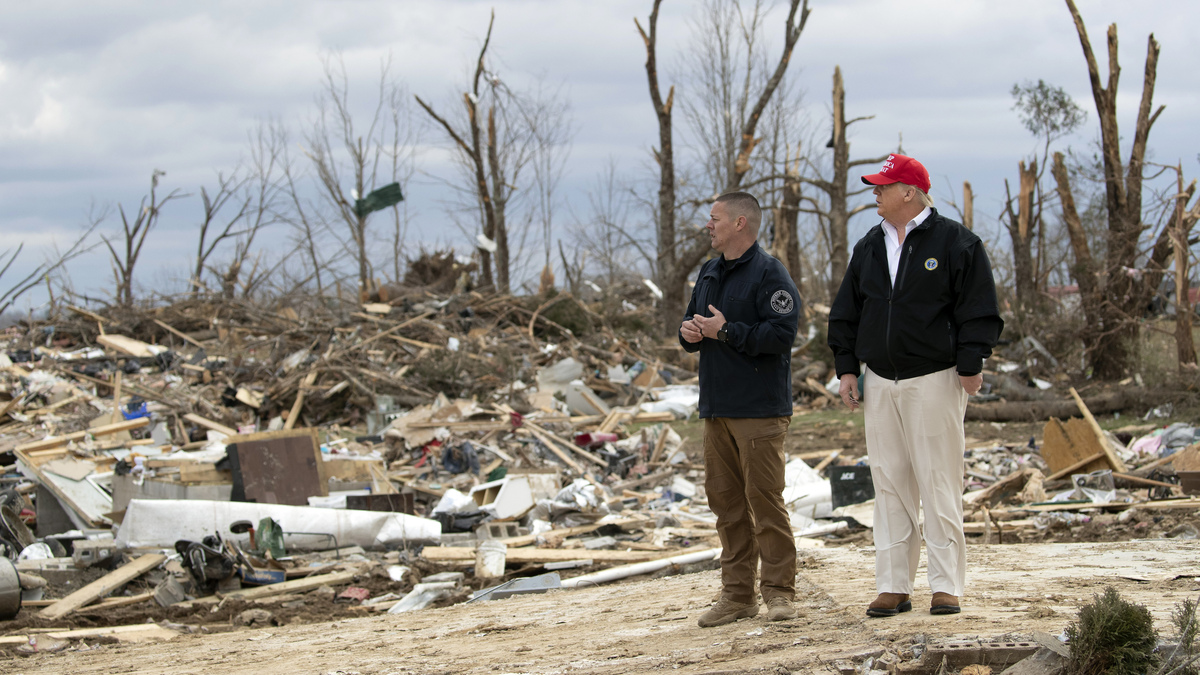 President Donald Trump speaks with a Putnam County rescue worker as he tours the damage left by the tornadoes in Cookeville, Tenn.

President Trump touched down Friday in Tennessee, where residents are still sorting through wreckage and seeking to rebuild after a series of deadly tornadoes blew through the state earlier this week. The president landed in Nashville and from there departed by helicopter for Cookeville, in Putnam County, where 18 residents died and dozens more were injured in the destruction Tuesday.

All told across the state, authorities say at least 24 people died in the storms.

"I have a message for the families of those that lost their lives: We love them. They're special people. It's an incredible place — incredible state, tremendous heart," Trump told a news conference Friday in Cookeville, in front of the wreckage of a home. "Already you see people rebuilding."

He was accompanied on his trip to Tennessee by members of the state's congressional delegation, including the state's two Republican senators, Marsha Blackburn and Lamar Alexander. Gov. Bill Lee was there to greet him when he arrived.

"It's been a painful, tragic week for our state," Lee said during the joint news conference with Trump, "but Tennesseans are hopeful."

.@realDonaldTrump in Marine One, on the way to survey tornado damage in Tennessee. (As seen from the pool Osprey) pic.twitter.com/TB1Rst0v3l

Cookeville Mayor Ricky Shelton gave NPR's Morning Edition a sense of the aftermath, describing the brutalized landscape that was to greet Trump on Friday.

"You just see the trees are just laying down, houses gone, and all you see is concrete foundations," Shelton said. "Our road crews were having to take heavy equipment to bulldoze our way through these streets, because they were covered in trees and power lines and poles."

As of Thursday, more than 23,000 people in three counties remained without power and Tennessee remained under a state of emergency. Trump freed up federal funds for Putnam, Davidson and Wilson counties by declaring a major disaster in the state.

During the news conference Friday, the president tried to end on a hopeful note, recalling a story he had heard about a boy whom one tornado ripped from his home and deposited a couple of blocks away, relatively unharmed.

"And how did his parents do?" Trump asked the officials standing beside him.

"They were found deceased," came the reply. "He was the only surviving member of the household. Lost his sibling as well."