Accessibility links
While Taliban Fight On, U.S. Tries Keeping Political Deal On Track Afghanistan's president is resisting a promised prisoner swap, the Taliban has resumed attacks, but U.S. officials are pushing both sides to sit down for a political settlement to end the war. 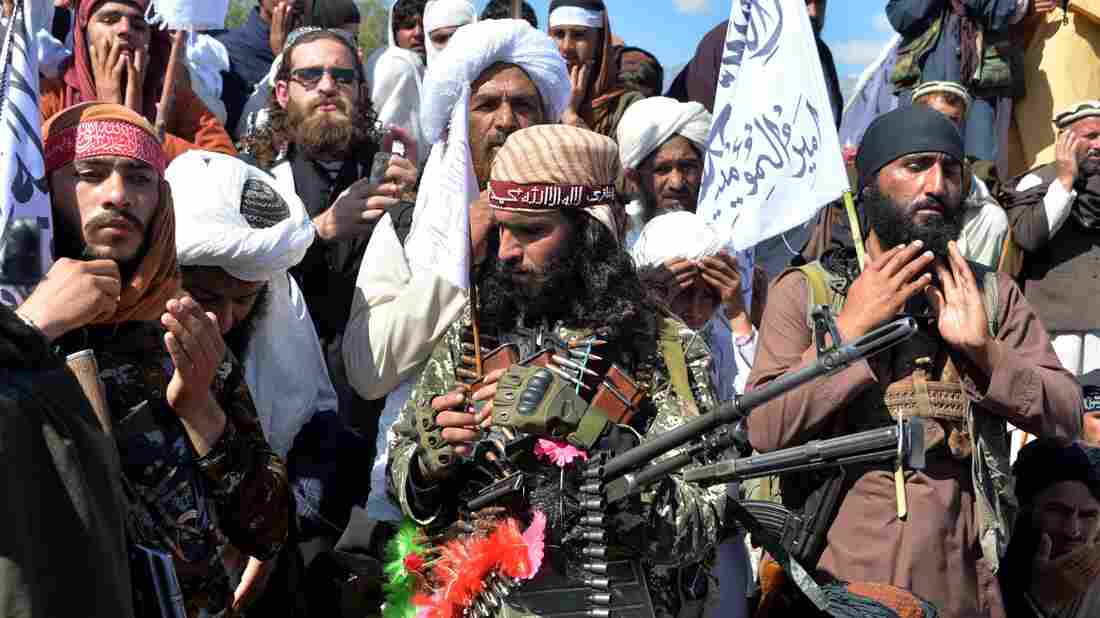 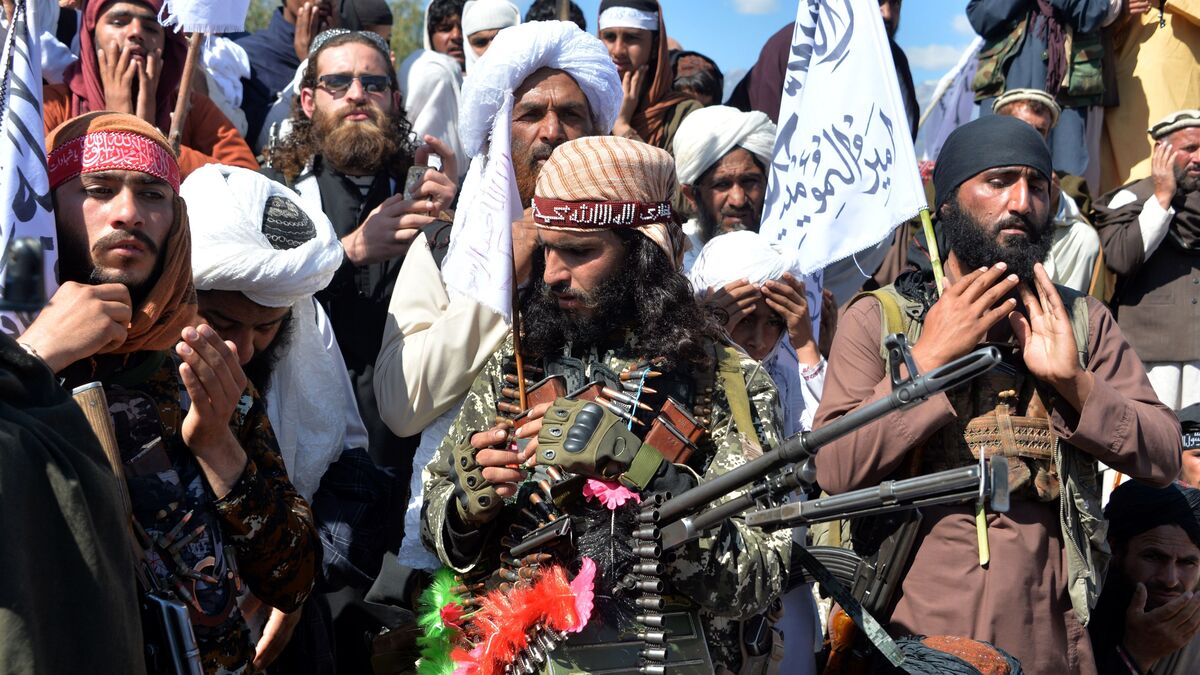 With less than four days to go before peace talks are to begin in Afghanistan between that nation's authorities and the Taliban insurgency, things are not looking promising.

Taliban fighters are stepping up attacks on Afghan security forces. American warplanes are counterattacking. And a prisoner exchange that was to take place before those intra-Afghan talks start is being rejected by Afghan President Ashraf Ghani.

On Friday in western Kabul, the Associated Press reports that gunmen opened fire at a largely Shiite gathering, killing at least 32 and injuring scores more. The Islamic State-Khorasan Province claimed responsibility for the attack.

All this comes after the U.S. and the Taliban — but not the Afghan government — signed an agreement Feb. 29 in Doha, Qatar with the stated aim of "bringing peace to Afghanistan" more than 18 years after U.S. forces pushed the Taliban out of power.

U.S. Targets Taliban In Airstrike Days After Deal Was signed

U.S. Targets Taliban In Airstrike Days After Deal Was signed

"We know that the road ahead will be difficult," said Secretary of State Mike Pompeo in Washington on Thursday. "We expected it. We were right."

Despite declaring the upsurge in violence "unacceptable," Pompeo did not insist it end altogether. "It's time to move forward. It's time to reduce violence. It's time to sit down and talk," he said.

President Trump also is pushing hard on the agreement. By making a phone call this week to Taliban deputy leader and co-founder Mullah Abdul Ghani Baradar, Trump became the first American president to speak directly with the Taliban since the 2001 U.S. invasion of Afghanistan.

But one leading expert on the complexities of Afghanistan cautions that Taliban fighters, having secured a peace agreement with the U.S., may not be ready yet to sit down and talk with Afghan authorities, whom they see as U.S. puppets.

"They want to indicate that they still have the capacity to fight if their demands are not met," says Barnett Rubin, a former State Department senior adviser on Afghanistan who directs New York University's Afghanistan-Pakistan Regional Project. "And they have the additional incentive that President Ghani said that he will refuse to release the prisoners before the talks start. So escalating militarily is a way of trying to put pressure on him to soften his position."

'We still have confidence'

Rubin notes that the Taliban seem confident the U.S. will not pull the plug on a deal promising the withdrawal of all American forces within 14 months: "I think everyone who observes Donald Trump should have concluded long ago that he's decided to get out of Afghanistan."

Asked during Congressional testimony this week about the Taliban's renewed violence, joint chiefs chairman Gen. Mark Milley made clear he did not consider it a deal breaker.

"Yes, there was significant numbers of attacks, small attacks," the Pentagon's top military official told the Senate Armed Services Committee. "They were all beaten back."

Pompeo, for his part, went so far as to hail efforts to reduce violence that he said were being made by the insurgency's leaders. "We still have confidence," he said Thursday, "that the Taliban leadership was working to deliver on its commitments."

Any commitments that may have been made to reduce violence do not appear in the four-page agreement signed in Doha. Its only reference to the ongoing fighting is a stipulation that participants in the proposed intra-Afghan negotiations "will discuss the date and modalities of a permanent and comprehensive ceasefire."

Still, the top American commander in Afghanistan warns that the ongoing violence could imperil the Doha accord.

"If the Taliban are not going to lower violence, that causes a risk to this agreement," Gen. Scott Miller told Afghanistan's TOLO news agency earlier this week. "Which is why we've gone directly to the Taliban, said you need to lower your violence — otherwise, it's hard to have an agreement."

The Doha agreement does have language specifically calling for the release of detained combatants: "Up to five thousand (5,000) prisoners of ... the Taliban and up to one thousand (1,000) prisoners of the other side will be released by March 10, 2020, the first day of intra-Afghan negotiations."

But a joint declaration issued by Afghan president Ashraf Ghani and U.S. Defense Secretary Mark Esper on the same day the Doha agreement was signed lacks any similar specific commitment to a prisoner release, according to Reuters. It simply calls for the Afghan government's participation in a "U.S.-facilitated discussion with Taliban representatives on confidence-building, to include determining the feasibility of releasing significant numbers of prisoners on both sides."

"Those aren't remotely inconsistent," Pompeo declared when asked about the apparent discrepancy regarding a prisoner swap between the documents the U.S. signed with the Taliban and the declaration it made in Kabul. "These were heavily negotiated documents. All the parties understand that it's time for prisoner exchanges to take place."

Pompeo added that the U.S. continues "to press all sides to stop posturing, start a practical discussion about prisoner releases, knuckle down and prepare for the upcoming intra-Afghan negotiations."

Like Pompeo, NYU's Rubin was in Doha for the signing ceremony. He says if the document's call for the release of 5,000 Taliban prisoners had not been included, the agreement would not have been signed by the insurgency.

"The Taliban understood it as a commitment by the United States to get the prisoners released. That is what they're standing firm," says Rubin. "The United States is standing by the literal meaning of the words, but trying to persuade the [Afghan] government. It is ambiguous in a way that diplomatic documents are often ambiguous."

Despite his stated refusal to go along with the prisoner release, President Ghani did meet Friday evening with U.S. Special Representative for Afghan Reconciliation Zalmay Khalilzad, the Afghan-born American diplomat who signed the agreement with the Taliban in Doha.

"Both sides talked about the future steps in the peace process," Ghani's spokesman wrote on Twitter, "and [the] start of the negotiations between the Islamic Republic of Afghanistan and the Taliban."

While those talks are slated to begin March 10, Barnett says that's unlikely to happen without concessions.