Accessibility links
A Family Flees In 'Story Boat': 'Here' Is Home, But 'Here' Keeps Changing "We think of refugees as people who wait a lot and suffer," says author Kyo Maclear. She was determined to tell a different kind of story. Her illustrator, Rashin Kheiriyeh, fled Iran as a child. 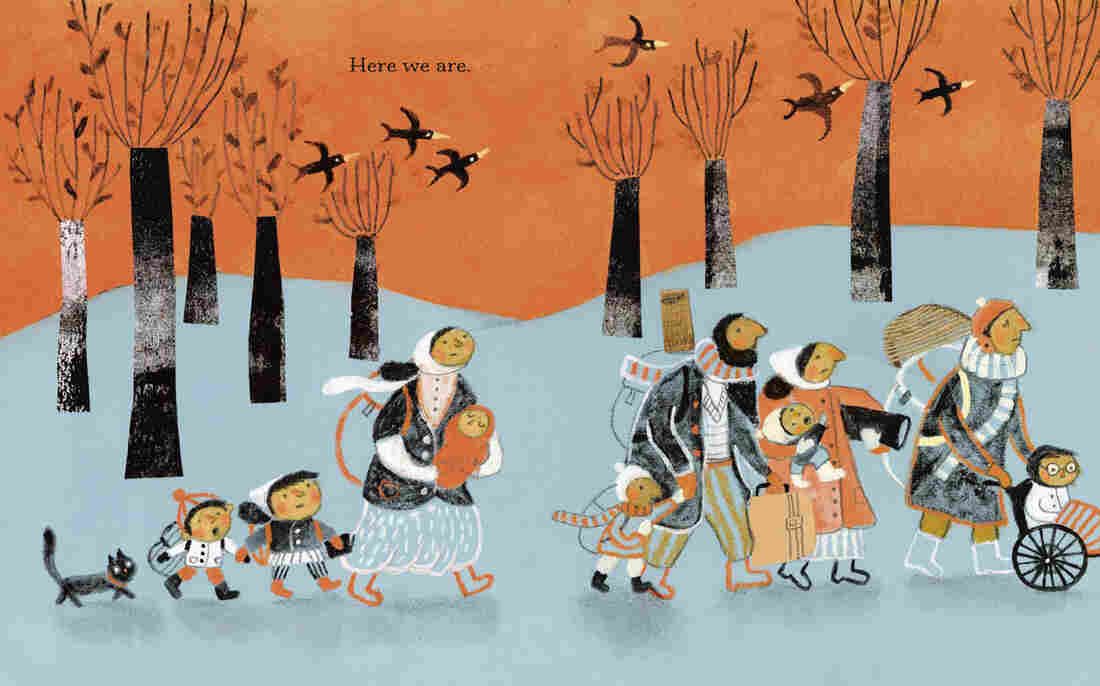 When illustrator Rashin Kheiriyeh first read the manuscript of Story Boat, she recognized the children in it immediately. Kheiriyeh's family fled Iran after war broke out in 1980 — she remembers what it was like to leave everything behind, to escape to a safer place. So Kyo Maclear's story, about a little girl and her family who are forced to leave home, felt very familiar.

"I thought, oh, that's me," Kheiriyeh says. "That's the girl who likes to draw and has a wild imagination. ... When I started illustrating this book in my studio, I kept thinking ... I'm drawing myself."

The family in Story Boat is leaving an unspecified place and heading to an unknown destination. "It's a story about uncertainty. It's about dreaming," Maclear says.

The family in the book is in the midst of an ongoing journey — "here" is home, but "here" keeps changing. Maclear says she tried to build a pattern into the book to give children a "thread of continuity."

Here is a cup that the children sip from every morning.

Here is a blanket that the children sleep under every night.

"I wanted to give a sense of what home might be in the absence of a solid place," Maclear says.

Kids are "natural collectors," she says — just look at the way they curate their Halloween candy. "Building the story around objects makes it very recognizable, I think, to a lot of children ..." Maclear says, "whether they were on the inside of [the refugee] experience or on the outside of the experience." 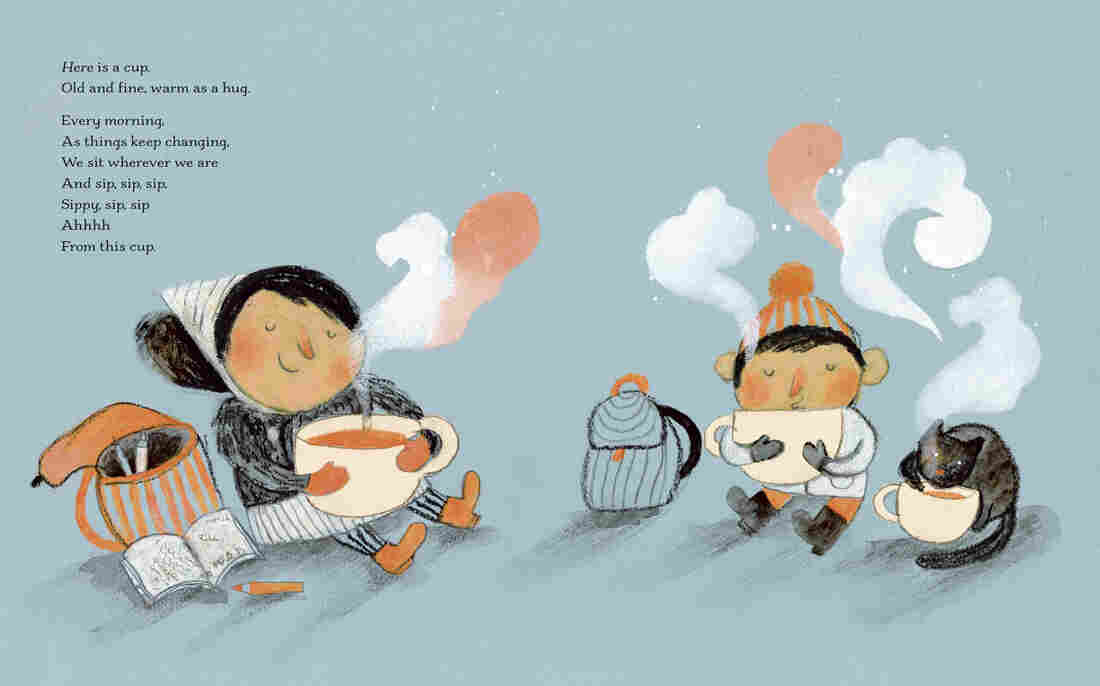 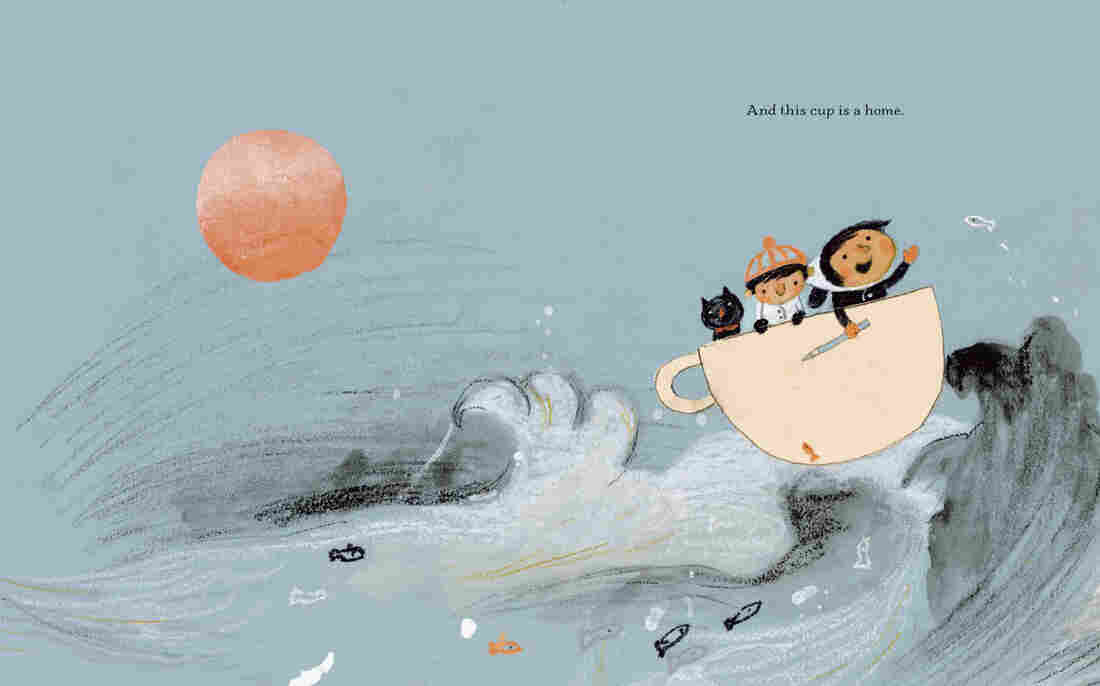 Here is a cup and a blanket and a lamp — but it is also a song and a journey.

"What I really want to convey was the idea that home was also a story," Maclear says. "That what could carry us in the absence of something solid was just the presence of a story." 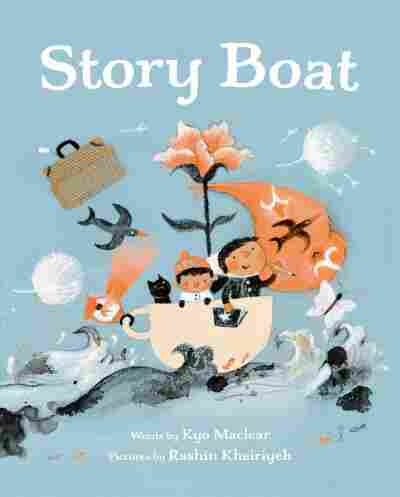 by Kyo MacLear and Rashin Kheiriyeh

Kheiriyeh built a sense of continuity into the illustrations as well. She appreciated the simplicity of Maclear's writing. "So I tried to use it in my illustration, too," Kheiriyeh says. "I tried to make it as simple as I can."

Using watercolor, ink and oil paint, Kheiriyeh illustrated the book in white, black, blue and orange. The blue is meant to represent water. The orange was inspired by the bright orange life vests.

Maclear says Rashin was a "perfect fit" for the book. "I felt that she had inhabited this story so fully," she says. "And that's all you can ever hope for as a writer."

Seeing the illustrations also helped Maclear pare down her writing. After you get a look at the images, "you begin to see as a writer what words are unnecessary ..." Maclear says. "Everything keeps moving until the very end. I really love that process."

It took a long time for Maclear to find the right artist for Story Boat -- and she acknowledges that this was a complicated book to illustrate. "There's kind of a whimsy to it," she says, "but there's also a ... hard reality. ... It's really tricky as an illustrator to capture that in a way that kind of honors the situation," Maclear says.

When she saw Kheiriyeh's sketches, Maclear knew she'd finally found the right fit. "It was like being on The Bachelor and you find your perfect match," she recalls.

The illustrations in the book alternate between the experience of the fleeing families — walking with their belongings, living in tents, boarding a small boat — and the imaginative lives of the children — sailing the open ocean in a teacup, the wind filling their blanket turned sail. 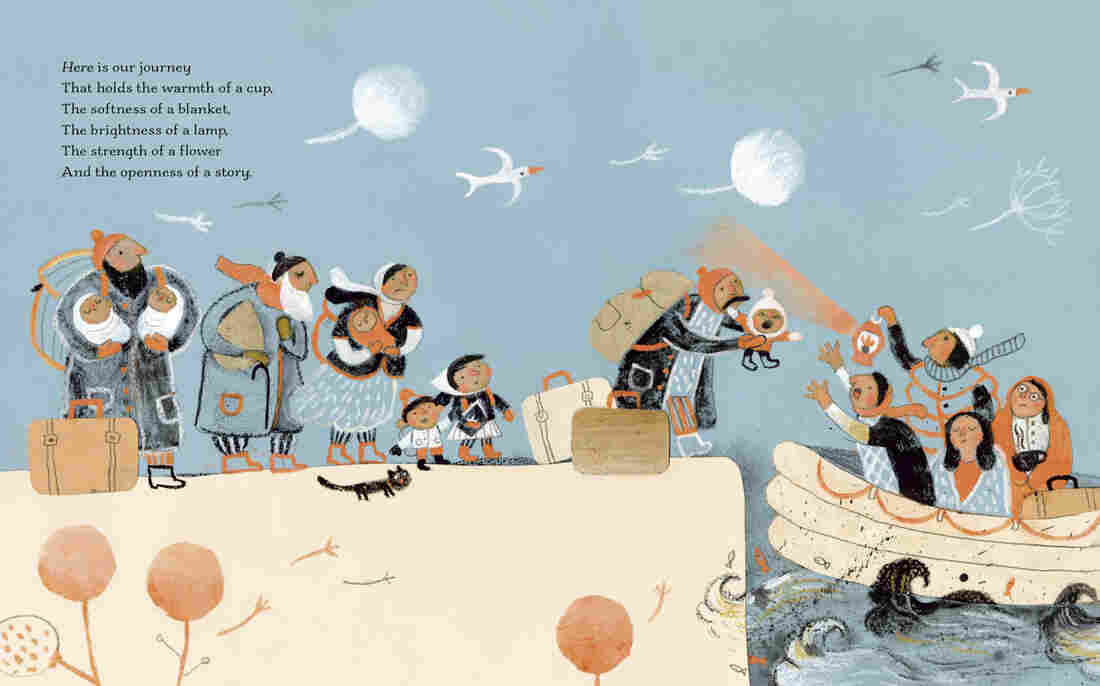 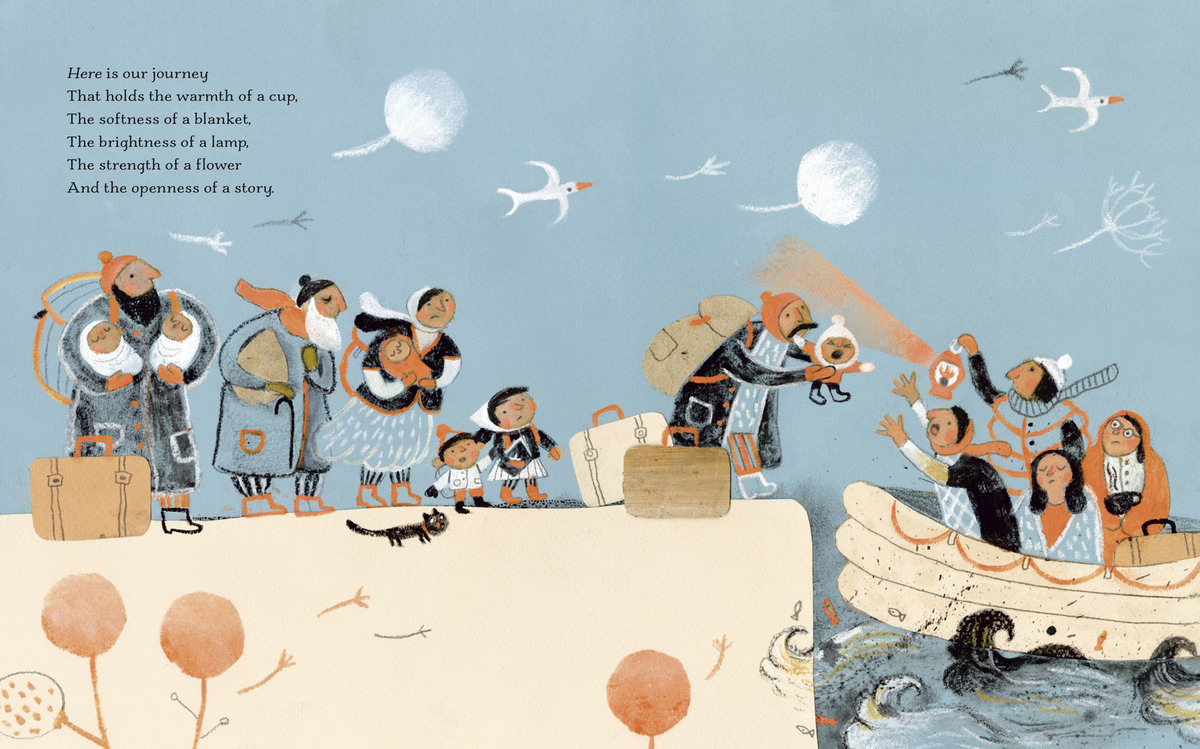 "It kind of switches between images that capture the gravity ... and the painfulness of the situation," Maclear says. "But every time you turn the page, you're back in the interior life of the children."

Kheiriyeh says she loves the universality of the book. "The whole point of this story in writing and illustrating is to give hope to kids," she says.

Maclear also wanted tell a story about refugees that was full of compassion, creativity and humanity. "We think of refugees as people who wait a lot and suffer," Maclear says. "But I wanted to portray a story where refugees also imagine, and dream, and run towards life." 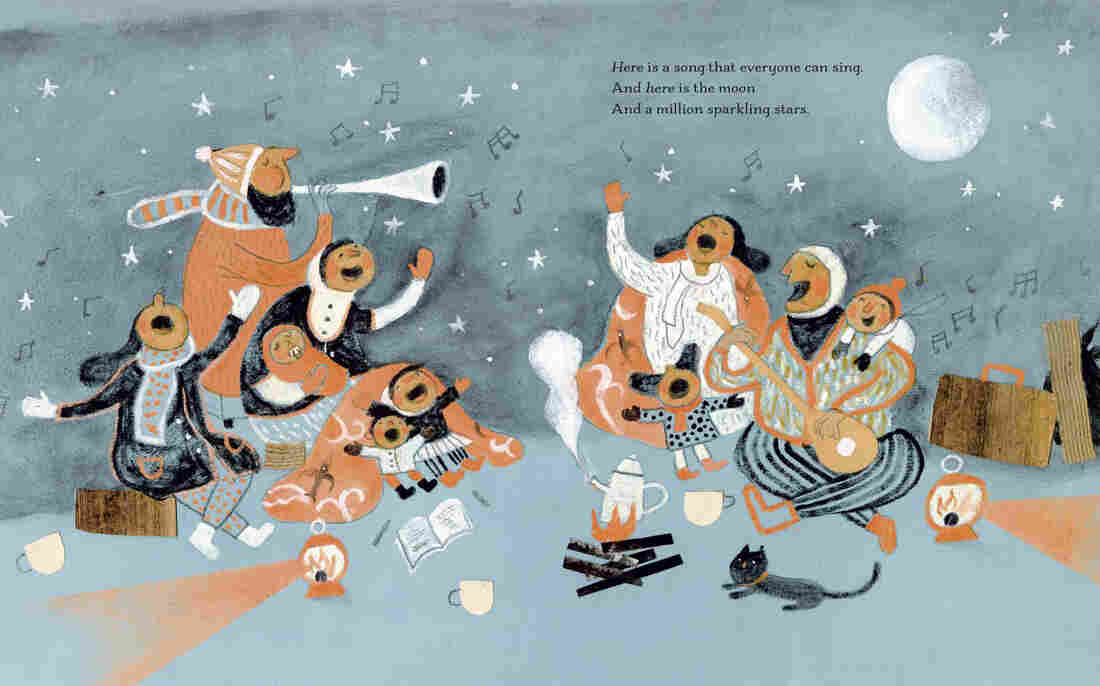 NPR's Samantha Balaban and Barrie Hardymon produced and edited this story for broadcast. Beth Novey adapted it for the Web.