Accessibility links
Trump Campaign Makes Pitch To Black Neighborhoods In Cities Like Milwaukee The Trump campaign held a Black Voices for Trump event in Milwaukee, part of what many see as an uphill push to peel off some African American votes in battleground states in 2020. 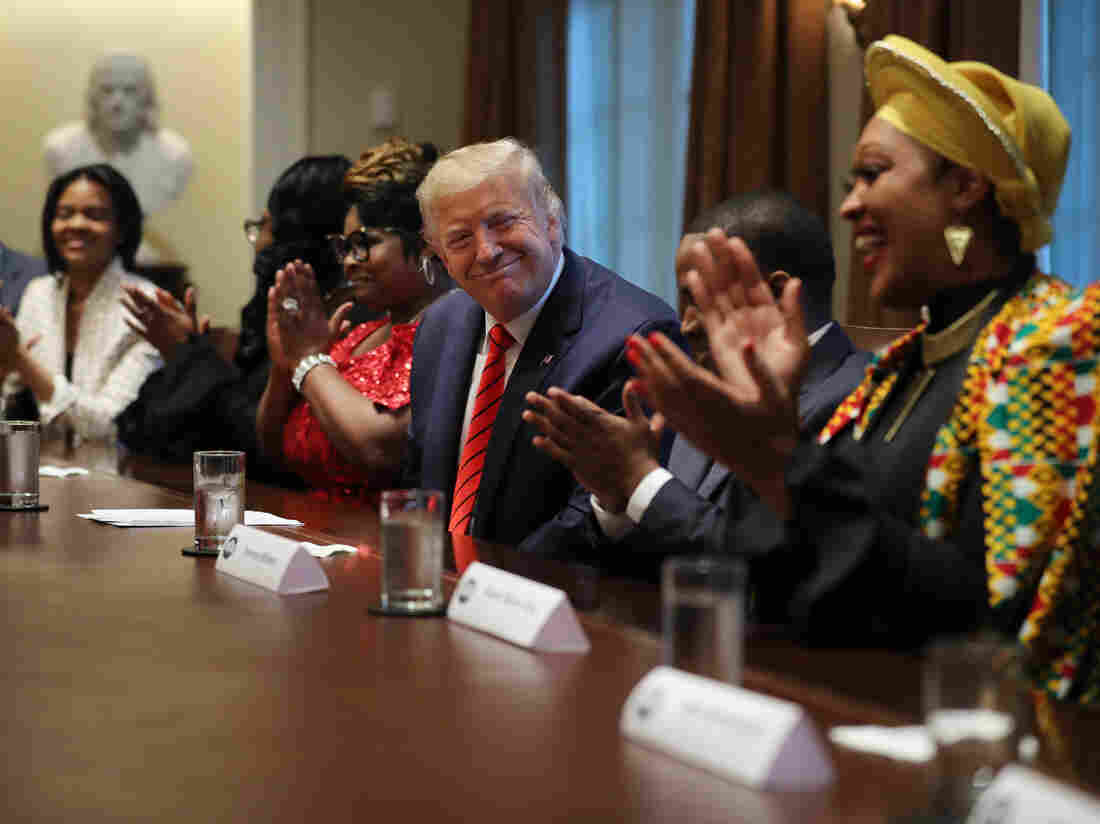 President Trump smiles at Angela Stanton-King at an African American history event at the White House. A few days later, Stanton-King was a speaker at a Black Voices for Trump event in Milwaukee. Chip Somodevilla/Getty Images hide caption 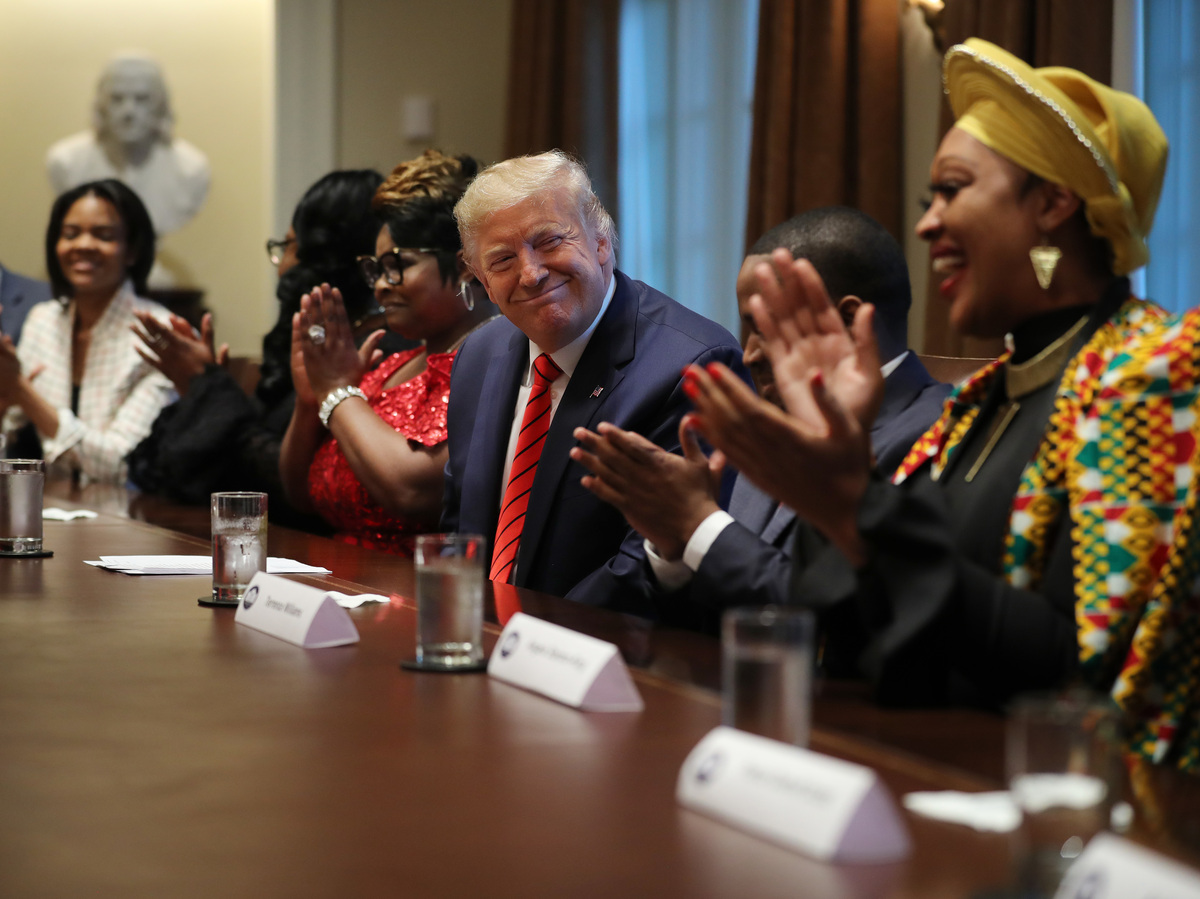 President Trump smiles at Angela Stanton-King at an African American history event at the White House. A few days later, Stanton-King was a speaker at a Black Voices for Trump event in Milwaukee.

President Trump has been spending a lot of time this year talking about his record on criminal justice reform, a low black unemployment rate and his support for historically black colleges.

It's part of his re-election campaign's quest to peel off some support from one of Democrats' most loyal constituencies — black voters — particularly in battleground states like Wisconsin, where the race in November may be tight.

So that's why his campaign is focusing on cities like Milwaukee for what it is calling Black Voices for Trump. Last weekend, the initiative held a panel discussion there, at the state Republican party's first-ever field office in Milwaukee, in a predominantly African American neighborhood. 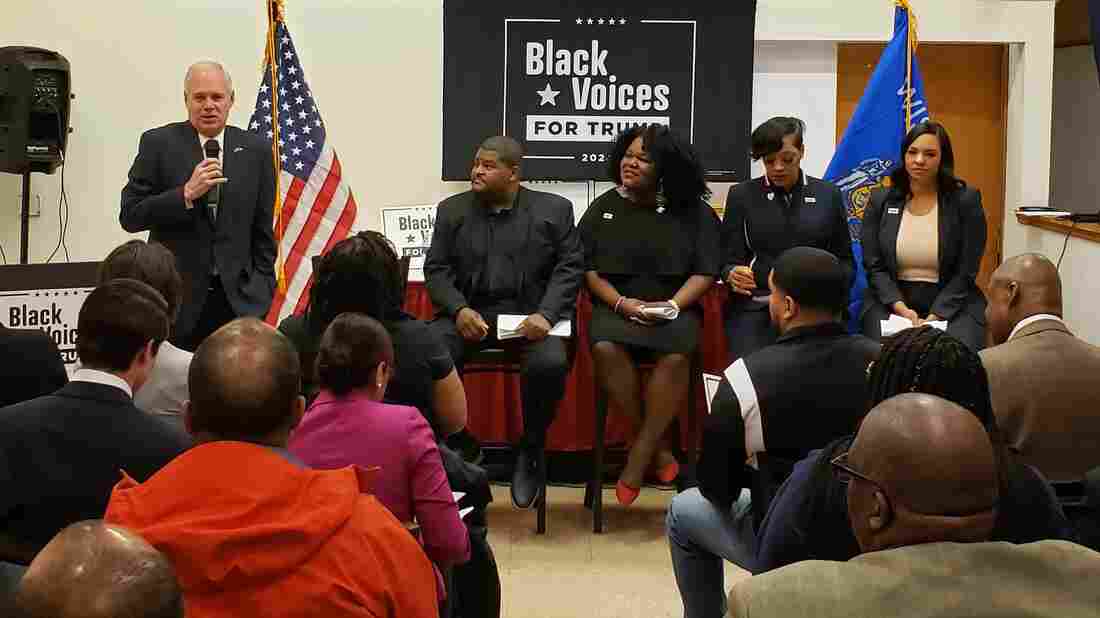 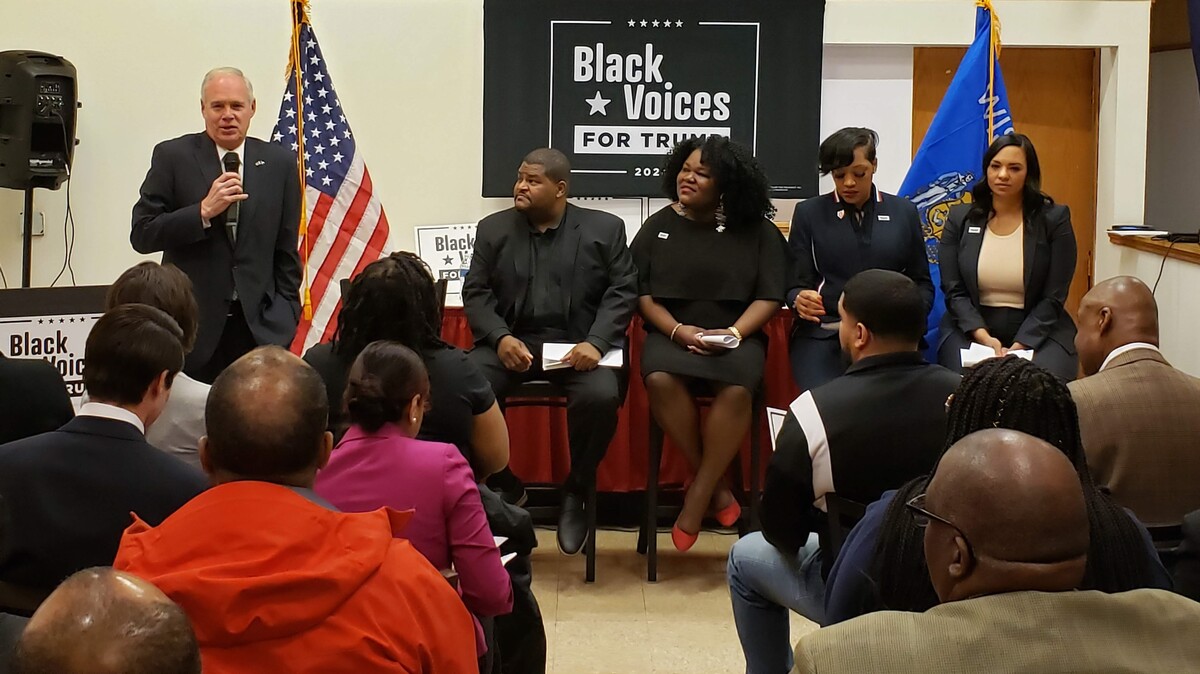 About 50 people gathered in the storefront location to hear speakers talk about what it is like to be black Republicans in a country where the vast majority of black people are Democrats.

They told their personal stories about converting to the Republican Party. Cecilia Johnson described receiving a "verbal beat-down" from her African American coworkers after she told them she had become a Republican.

"A lot of people just looked at it as a betrayal of my blackness," said Johnson, now a political activist based in Kansas City, Mo. She rejects the accusation: "You're not going to tell me that I hate my mama, that's what you not going to do." 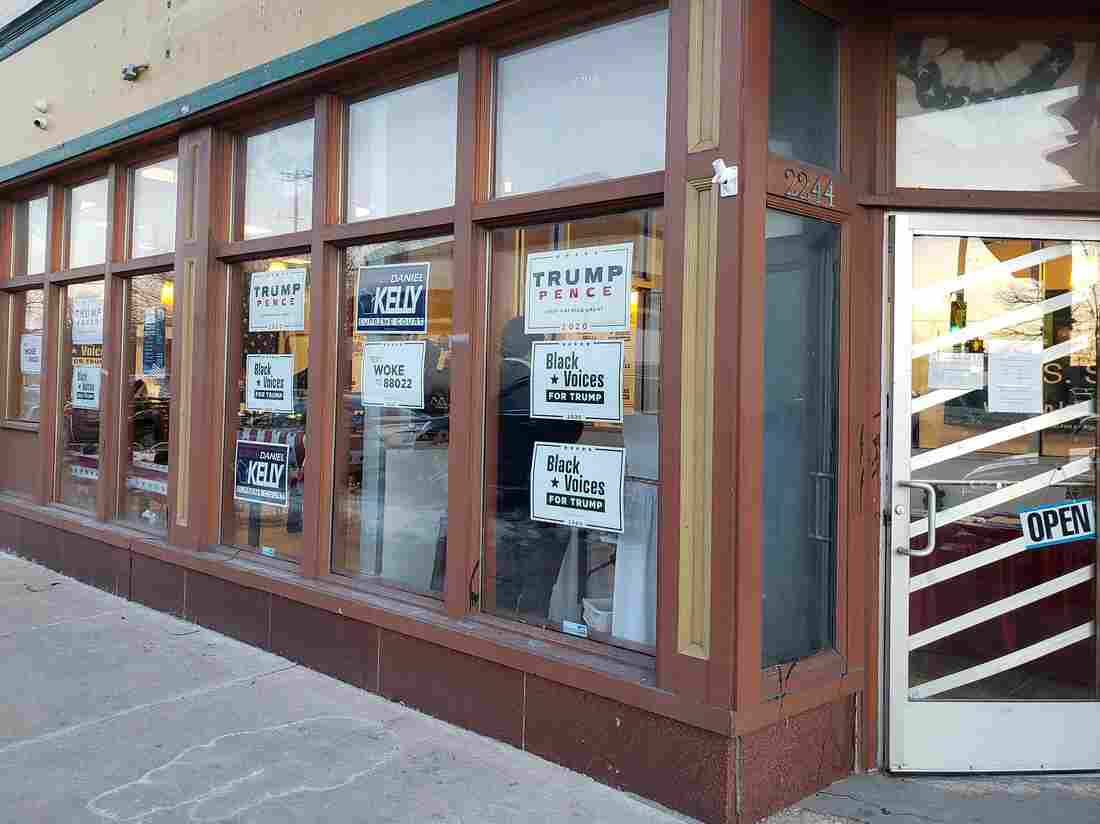 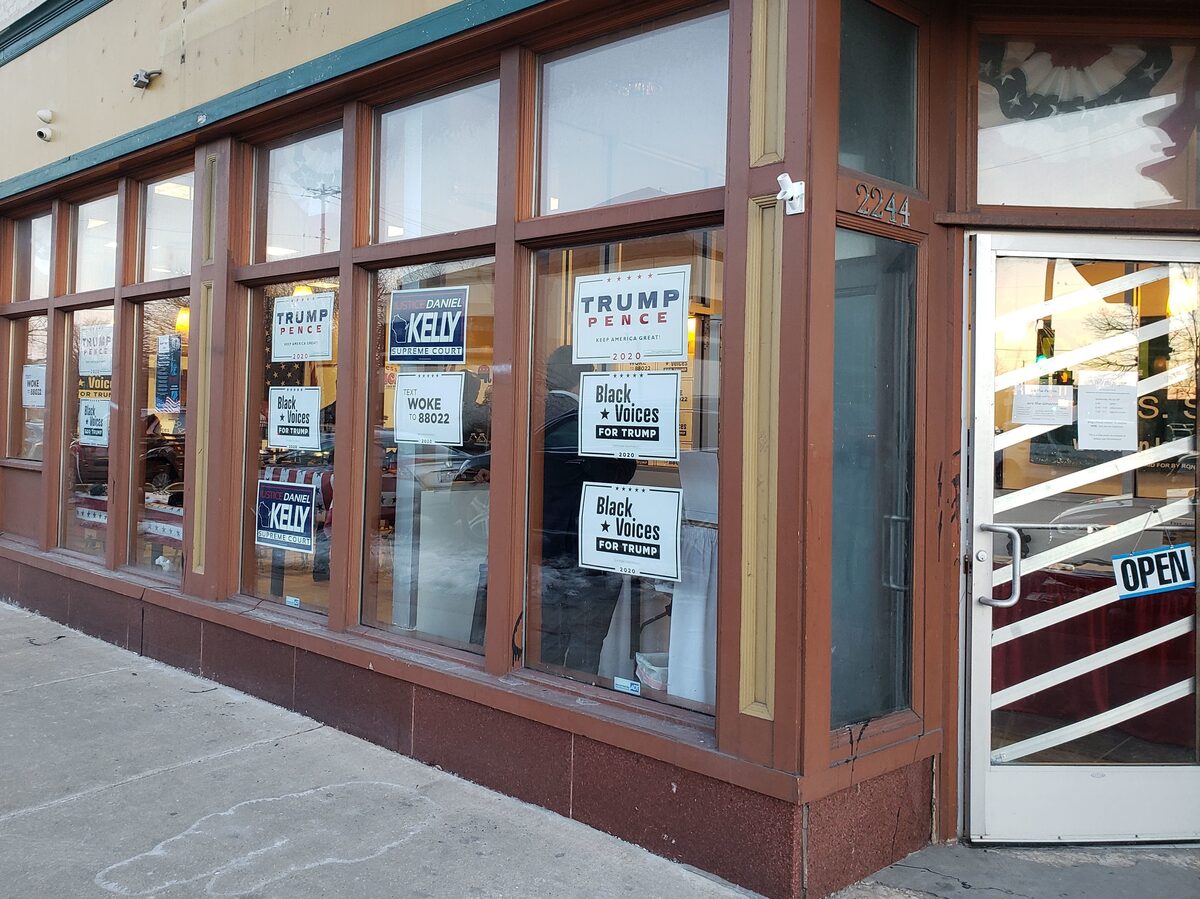 The campaign has plans to open field offices in 15 cities, including Milwaukee, Philadelphia and Detroit, as a part of its Black Voices for Trump effort.

Making more African Americans comfortable with the Republican Party and Trump is one of the goals of these events as the campaign tries to reach new voters.

But at the Milwaukee meeting, many of the people in the room seemed to be politically connected, rather than local residents curious about backing Trump.

The new field office also has not received much of a warm welcome to the neighborhood. It was vandalized shortly after it opened.

And shortly before the event began, a black man walked in and shouted expletives about Trump, before being quickly escorted out.

With 3 more elections approaching, BLOC now has 50 combined Leads & Ambassadors who are excited to knock doors and make an even bigger impact for the communities that we serve. BLOC is growing stronger! #TheBLOCIsHot pic.twitter.com/i2VlB6MH23

Meanwhile, Democrats are determined to retake Wisconsin, too — and are focused on making sure black voters turn out. The progressive group Black Leaders Organizing for Communities, or BLOC, has been knocking on doors and talking to thousands of people in the city since 2017 to get residents involved in the political process.

Angela Lang, the executive director of BLOC, said having Republicans set up shop does change the dynamic in the area. But she said she thinks it's too late to have much impact.

"You can't set up shop in almost March, when the election is in November, and assume that people are just going to automatically come out and vote for you," Lang said in an interview.

Canvassers for Lang's group do not bring up Trump when they knock on doors, but when residents do talk about the president, Lang says it's not positive.

"He'll come up and people are angry, like people will proactively bring him up and are angry," Lang said. 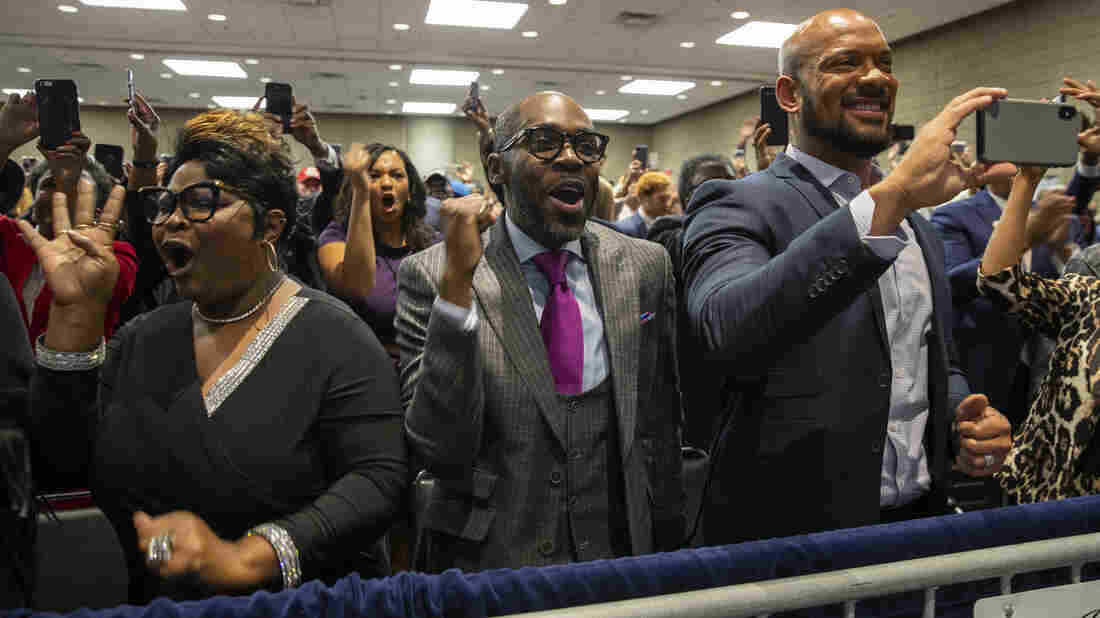 Supporters of President Trump cheer as he arrives to launch Black Voices for Trump at an Atlanta event. Evan Vucci/AP hide caption 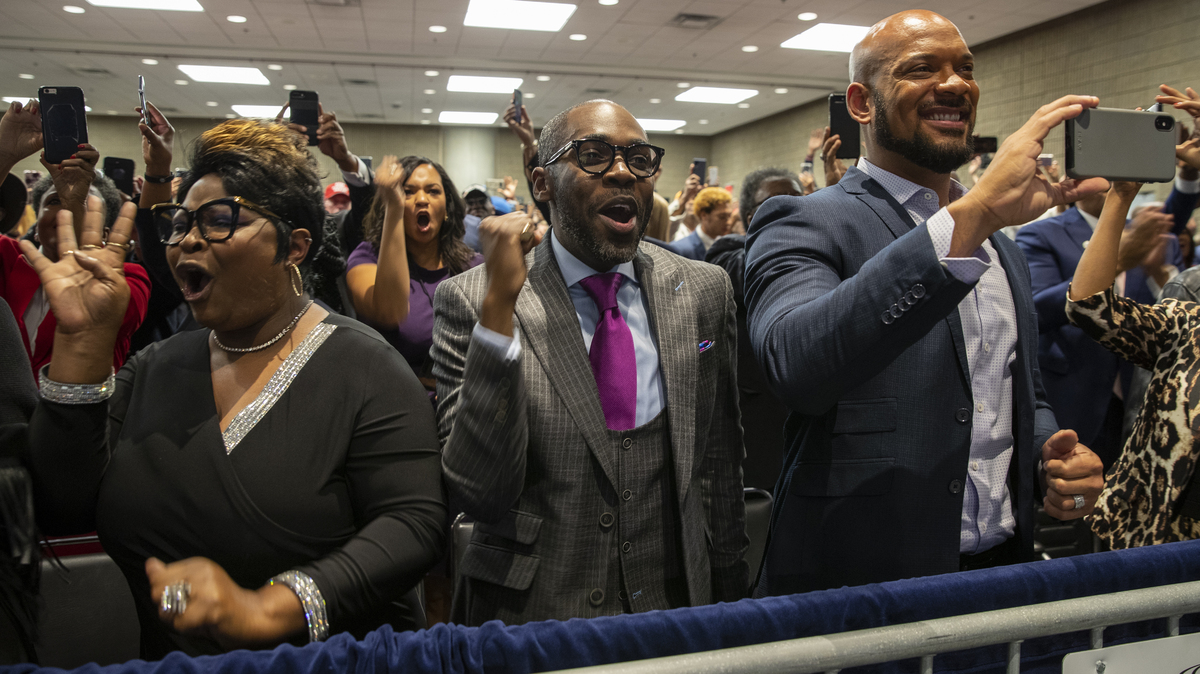 Supporters of President Trump cheer as he arrives to launch Black Voices for Trump at an Atlanta event.

For Trump, making inroads with black voters won't be easy. He won only 8% of the African American vote in 2016 and he remains deeply unpopular. But in crucial states like Wisconsin, even a small bump could make a difference.

And while Trump talks about the policies he feels have helped African Americans, he also spends a lot of time slamming Democratic opponents.

"The Democrats cater to them a month before the elections and then they leave and they don't do a damn thing for them. But, we've worked hard," Trump said on Fox News last week.

Critics argue that one of Trump's goals may be to actually lower black turnout in general by bashing the Democratic Party.

Trump supporters have said his message on the economy could resonate with black men. It also helps if a person has friends or family who are Republican. 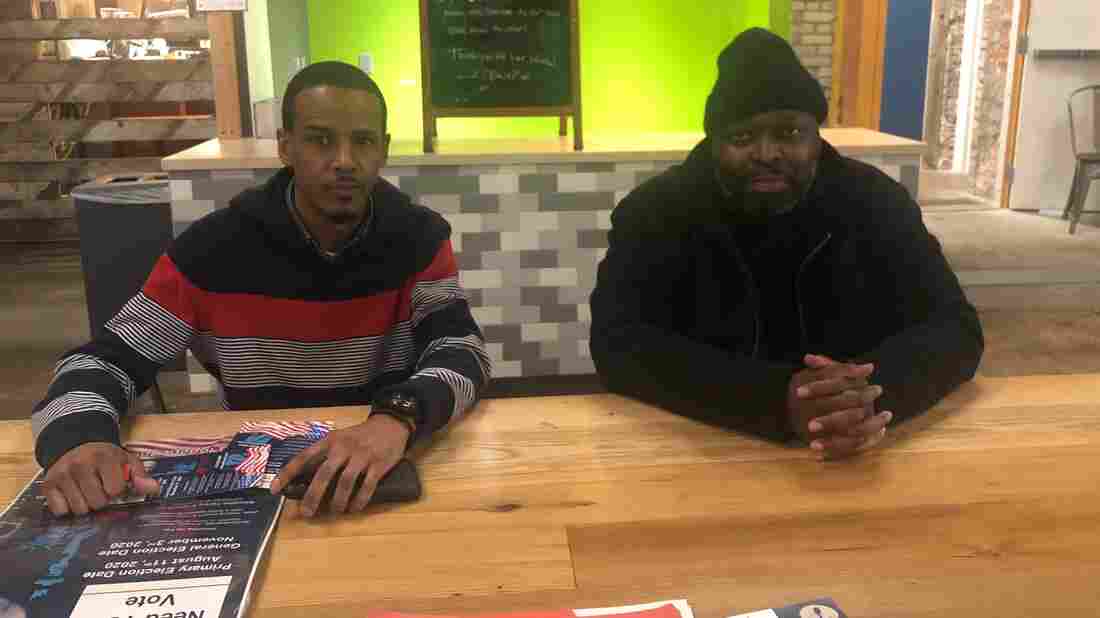 Quinn Taylor, left, says he learned more about the Republican Party from his friend, Orlando Owens. Owens is a Republican running for the Wisconsin state legislature. Ayesha Rascoe/NPR hide caption 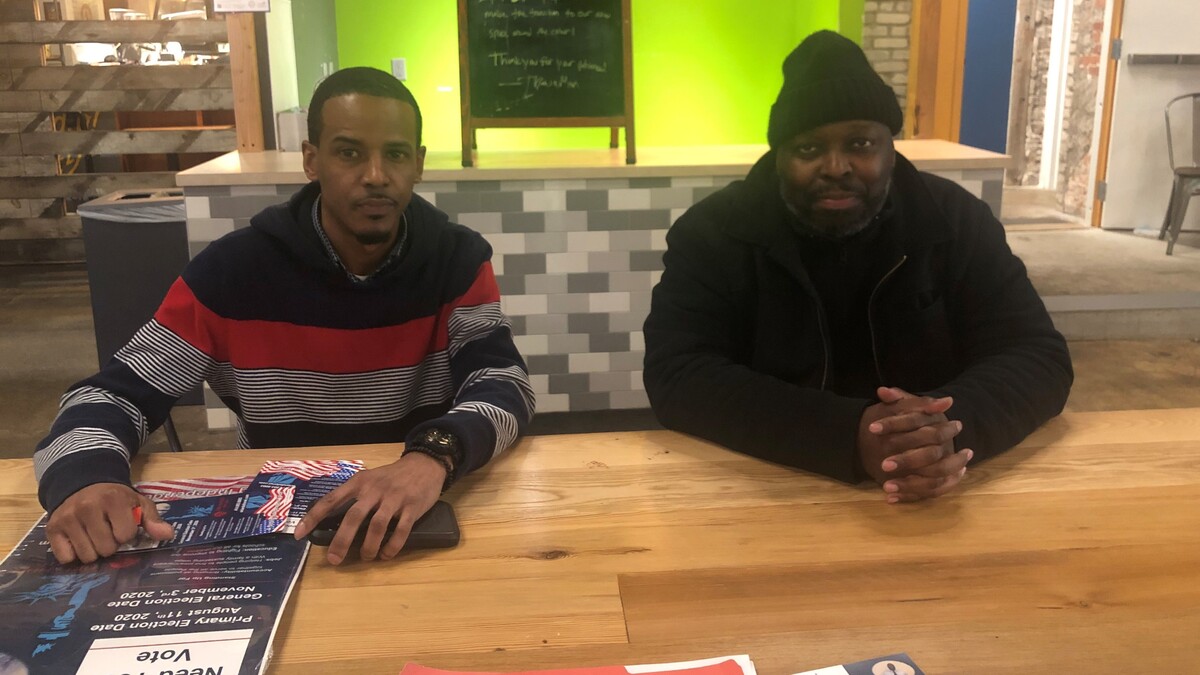 Quinn Taylor, left, says he learned more about the Republican Party from his friend, Orlando Owens. Owens is a Republican running for the Wisconsin state legislature.

Taylor supported former President Barack Obama, but he sat out the 2016 election because he was not a fan of Democratic candidate Hillary Clinton, or Trump.

He now considers himself an independent, but has become more interested in the Republican Party because of his friendship with Orlando Owens, a black Republican running for the state legislature in Wisconsin.

Taylor says he likes that Republicans focus on entrepreneurship and the importance of faith. But he has serious misgivings about Trump.

He's not alone. More than 8 in 10 black Americans say they believe Trump is a racist, according to a Washington Post/Ipsos poll.

Taylor says he's still open to voting for Republicans, but he's not yet sold on the party.