Accessibility links
Coronavirus: Italy Orders Massive Shutdown; Cruise Ship Gets OK To Dock In California Movie theaters, museums and other cultural sites throughout Italy are closed until next month. Meanwhile, a stranded cruise ship off California with infected passengers is finally allowed to dock. 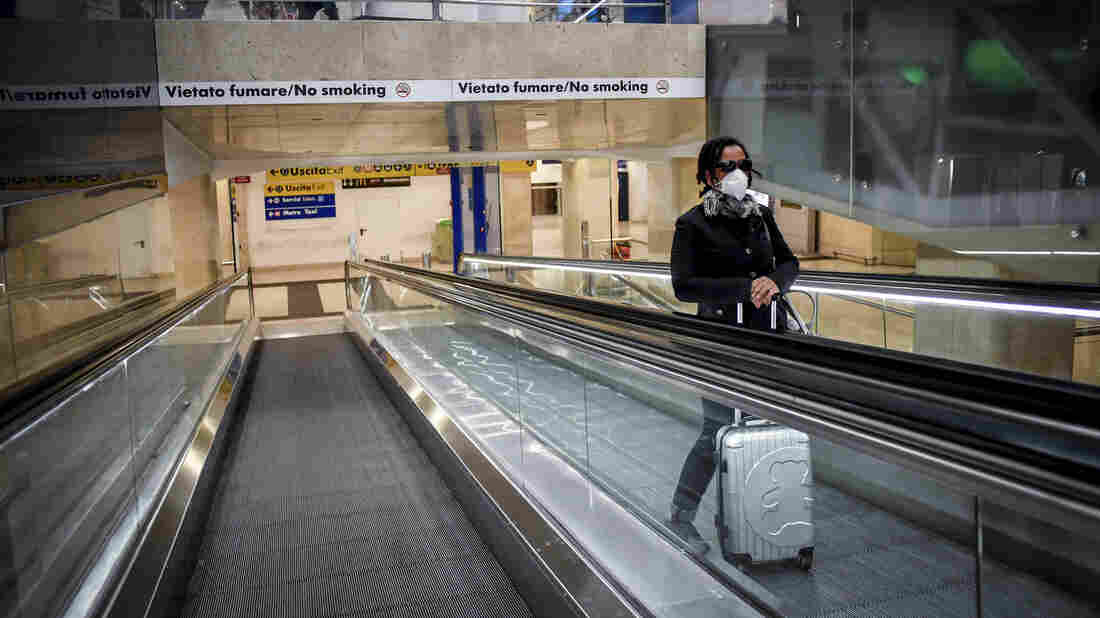 A woman wearing a medical mask rides an escalator at Milan Central train station on Sunday after Italy's government restricted much of the country in an effort to stanch the spread of the coronavirus. Claudio Furlan/AP hide caption 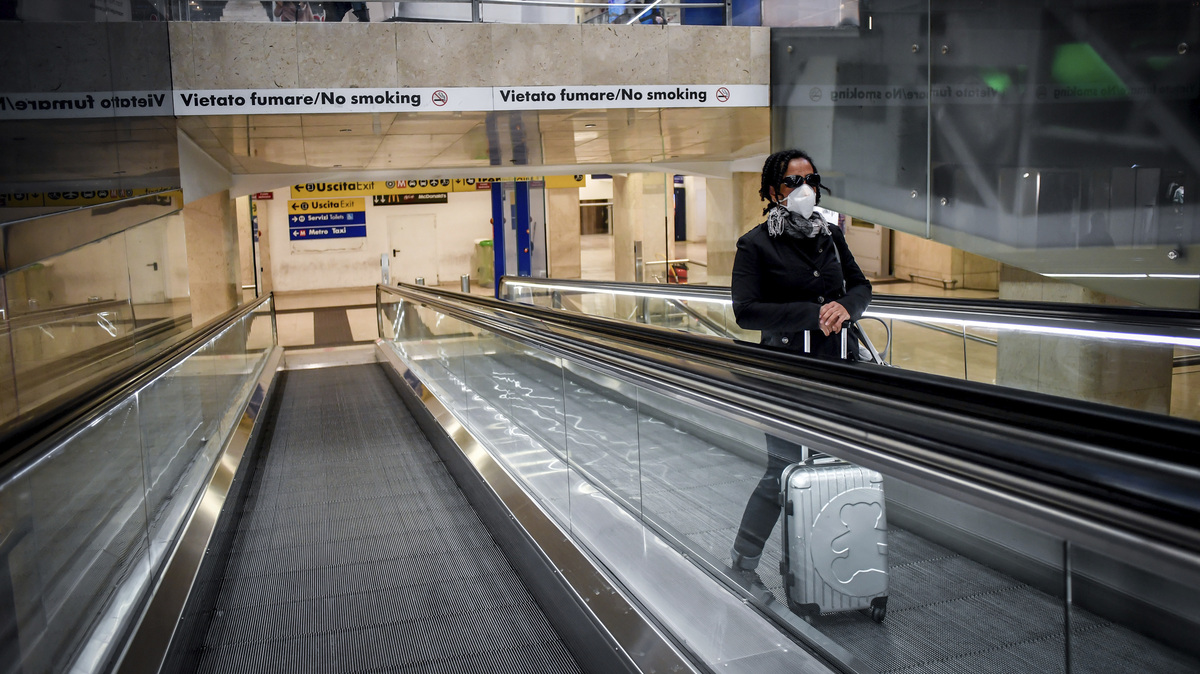 A woman wearing a medical mask rides an escalator at Milan Central train station on Sunday after Italy's government restricted much of the country in an effort to stanch the spread of the coronavirus.

As the novel coronavirus reached a global milestone, topping 100,000 cases across more than 100 countries over the weekend, Italy has imposed extraordinary restrictions on about a quarter of its population and limited public activities throughout the entire country.

The quarantine includes the cities of Milan and Venice, as well as the entire northern region of Lombardy, Italy's financial heart. It affects more than 16 million people in coronavirus hotbed areas and is scheduled to remain in effect until at least April 3.

Prime Minister Giuseppe Conte announced the move after confirmed cases in Italy spiked over the weekend. By Sunday, more than 7,300 people had been sickened and 366 had died — an uptick of 133 dead from the day before.

"There will be a ban for everybody to move in and out of these territories and also within the same territory," Conte said. "Exceptions will be allowed only for proven professional needs, exceptional cases and health issues."

In addition to the quarantine, Italy's cordon sanitaire effort to tamp down on transmission includes temporarily shutting down all movie theaters, museums and other cultural sites throughout the country. Sporting events are closed to the public.

People may dine out at restaurants, drink in bars, exercise in gyms and shop in stores, but only if managers guarantee that patrons remain just over 3 feet apart. "In case of violation, the activity will be suspended," the government said in a statement. 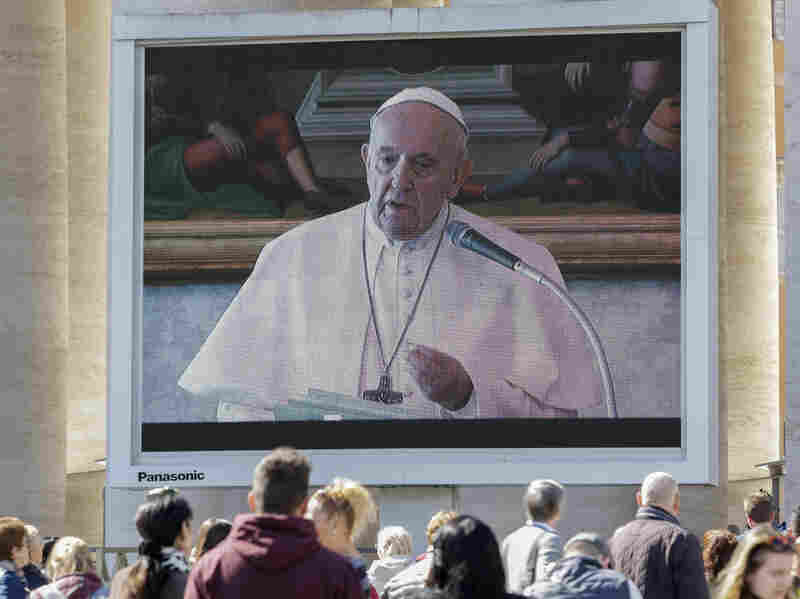 Pope Francis delivers the Angelus prayer via a giant screen in St. Peter's Square on Sunday amid sweeping coronavirus restrictions.

Italy, home of the highest number of cases outside of China, South Korea and Iran, is taking its lead from China, where the virus emerged late last year in the provincial capital of Wuhan. Beijing has placed tens of millions of people under lockdown in what it called an all-out "people's war" against the spread of the disease that has already infected more than 80,000, the vast majority of the global total.

In the U.S., officials in Washington state, where one of the largest domestic outbreaks has occurred, are considering measures to limit the spread of the virus.

"We are looking to determine whether mandatory measures are required," Washington Gov. Jay Inslee told Face the Nation. Those requirements would include social distancing and "reducing the number of social activities that are going on," Inslee said.

At least 136 cases have been diagnosed in Washington with 18 people dead. Most fatalities are connected to Life Care Center, a nursing home in the Seattle suburb of Kirkland.

Inslee said the next steps are "particularly to protect our vulnerable populations, and our nursing homes and the like."

Nationwide, infections have steadily ticked up, with reports of cases reaching 400 across at least 19 states, but widespread problems in testing have hindered effective diagnosis.

Dr. Anthony Fauci, director of the National Institute of Allergy and Infectious Diseases and a member of the Trump administration's coronavirus task force, says he is not encouraged as he learns more about the outbreak's scope in the U.S.

He admitted to delays in coronavirus testing, adding there were "some missteps with regard to the test and some technical aspects to it." But he said the process is accelerating, with 1.1 million coronavirus tests already sent out, with an additional 400,000 planned by Monday and about 4 million by the end of next week.

Even though Fauci maintains "the overall risk in the country of getting infected is low," vulnerable people can act now to protect themselves.

In California, a cruise ship, which has lingered in limbo for days off the coast after a former passenger who died of the virus is believed to have spread infections on board, is finally being allowed to dock.

"Grand Princess will proceed to the Port of Oakland on Sunday to begin disembarking guests who require acute medical treatment and hospitalization," the cruise line tweeted.

Among the 3,000 people on board, others will be allowed to disembark on Monday. They face testing and quarantine at military bases in California, Texas and Georgia.

At a news conference Sunday, California Gov. Gavin Newsom said authorities identified 12 people on board as positive for COVID-19, but said that number remains fluid.

He said 114 people have tested positive across California. But that number could rise with more than 10,000 people across the state being monitored.

But President Trump is remaining upbeat in his coronavirus messaging. Asked if he was concerned about the encroaching virus, Trump said Saturday from Palm Beach, Fla., "No, I'm not concerned at all. No, I'm not. We've done a great job."

As more cases crop up in the U.S. military, the Army is restricting travel for soldiers and their families to and from South Korea, where cases have topped 7,000, the highest number outside of mainland China.

USFK is aware of the Department of the Army's order to stop movement for all Army Soldiers and family members moving to or from South Korea or Soldiers scheduled to attend professional military education in the United States due to COVID-19 concerns. We are analyzing the impacts. pic.twitter.com/ssedpmligj

The Army is also restricting movements for employees in hotspots in Italy, after a U.S. Navy sailor there tested positive on Friday.

And a Pentagon spokesman announced Saturday a Marine assigned to Fort Belvoir, Va., tested positive for COVID-19, after returning from overseas.