Accessibility links
Trump: Payroll Tax Cut, Hourly Worker Relief Possible In Response To Coronavirus Top administration officials will meet with House and Senate Republicans Tuesday to discuss economic relief for workers and small businesses. Democrats, however, signaled they are not on board. 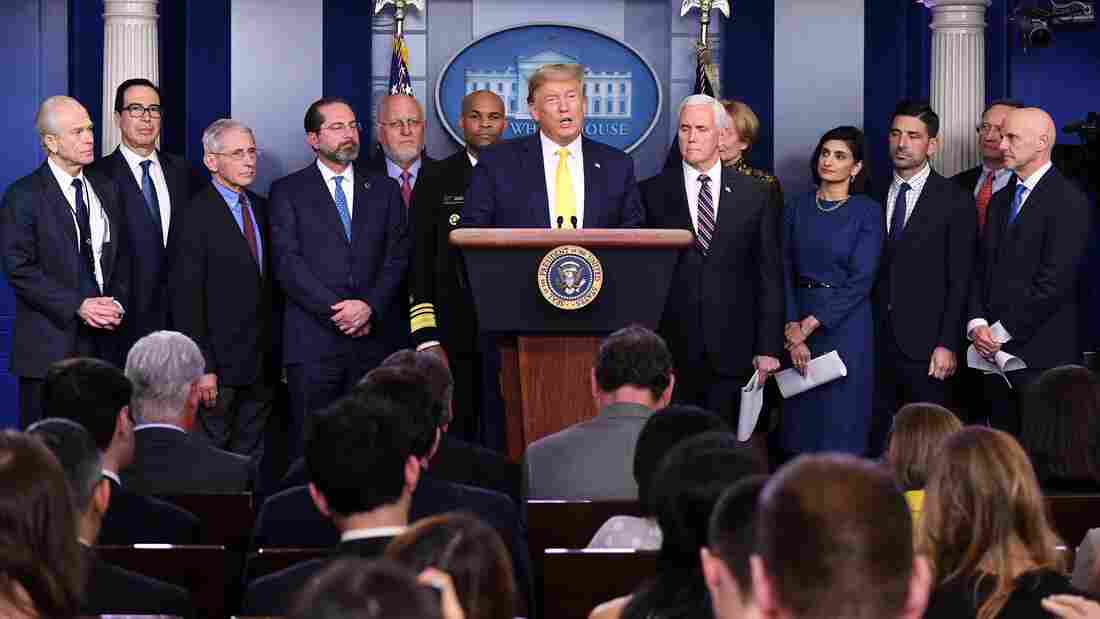 President Trump speaks about the coronavirus alongside Vice President Pence and members of the Coronavirus Task Force in the Brady Press Briefing Room at the White House in Washington, D.C., on Monday. Saul Loeb/AFP via Getty Images hide caption 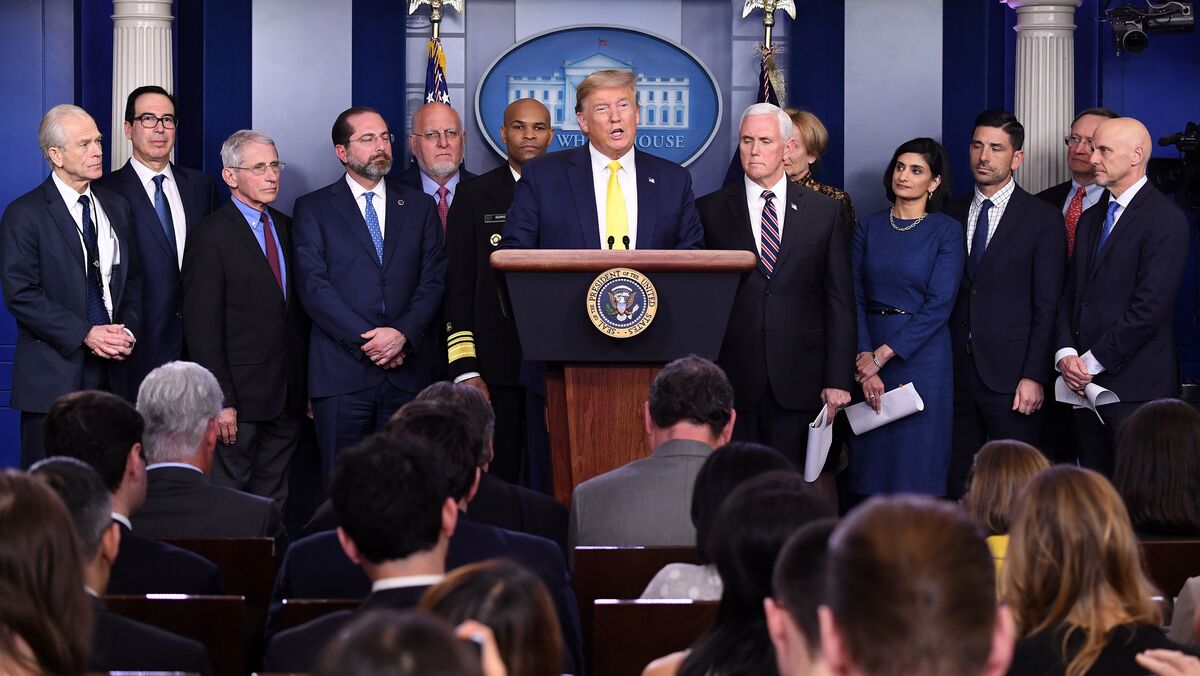 President Trump speaks about the coronavirus alongside Vice President Pence and members of the Coronavirus Task Force in the Brady Press Briefing Room at the White House in Washington, D.C., on Monday.

President Trump said Monday that the White House is planning to ask Congress to pass a payroll tax cut and relief for hourly wage earners in order to assist workers who may be feeling the financial pinch amid the coronavirus outbreak.

Trump said that top administration officials will be meeting with Republican members of the House and Senate on Tuesday to discuss the possible payroll tax cuts and help for hourly workers.

"Very substantial relief that's a big number," Trump said. "We're also going to be talking about hourly wage earners getting help so that they can be in a position so they are not going to ever miss a paycheck," he said.

Trump said the White House is also working with the Small Business Administration and industries including airlines, cruise ship businesses and hotel owners, which are all grappling with economic hardship as demand from consumers slumps and travelers cancel plans.

"We are going to take care of and have been taking care of the American public and the American economy," Trump said.

Trump's announcement comes after the worst day for markets since 2008, because of growing fears that the coronavirus will plunge the economy into recession. Trump met on Monday with his task force managing the country's response.

Democratic leadership, however, made clear on Monday night that they are not on the same page as the Trump administration. They don't support a payroll tax cut and say Trump appears to be more concerned about the stock market than dealing with the underlying coronavirus outbreak.

Senate Minority Leader Chuck Schumer said members of the Trump administration planning to meet with Senate Republicans on Tuesday "haven't checked with us, they haven't called us."

House Majority Leader Steny Hoyer said he doesn't think "a payroll tax is what we need right now ... what the economy needs right now is some stability and confidence that we're addressing the issue that is undermining the economy. The president's answer to almost everything is a tax cut."

The Trump administration has also summoned Wall Street executives to the White House for a meeting on Wednesday about the impacts of the coronavirus on the economy, a person familiar with the meeting confirmed.

Democrats, including Sen. Patty Murray of Washington, have called for legislative remedies including emergency paid sick leave to help workers who have to stay home due to the coronavirus outbreak.

On Monday, Vice President Pence did not rule out such a proposal, saying nobody should feel they should go to work if they are ill or fear losing their job or a paycheck for staying home as a result of the epidemic.

"The president has tasked the team with developing economic policies that will make it very, very clear that we're going to stand by those hardworking Americans, stand by those businesses large and small," Pence said.

Pence said more than 1 million coronavirus tests have been distributed and an additional 4 million are planning to be distributed.

Pence said he has not been tested for the respiratory disease.

Trump spokeswoman Stephanie Grisham issued a statement saying the president hasn't been tested "because he has neither had prolonged close contact with any known confirmed COVID-19 patients, nor does he have any symptoms."

"Per current CDC guidelines, medical professionals should base testing decisions on patient symptoms and exposure history," the statement said.

Rep. Matt Gaetz said on Monday that he was self-quarantining after learning he had been in contact with someone who tested positive for coronavirus at a conservative conference last month. Before making the announcement, Gaetz had flown on Air Force One with Trump.

Asked whether the coronavirus shock will send the American economy into recession, Treasury Secretary Steven Mnuchin sounded confident that the U.S. economy is resilient enough to push through the financial jitters.

"There are parts of the economy that will be impacted, especially workers who need to be at home, hardworking people who are at home under quarantine or taking care of their family. We'll be working on a program to address that," he said. "We will also be working with small businesses."

Mnuchin said the roiling markets were driven mostly by the dive in oil prices set off by Saudi Arabia. The kingdom recently flooded the market with crude oil, seen as a strike at oil giant Russia, which would not agree to curtain oil production to bolster prices, as the coronavirus slows demand. Analysts worried the move could be the start of the oil price war.

Mnuchin downplayed the long-term economic effect of the coronavirus, even as leading economists say the picture remains uncertain.

"The economy will be in really good shape a year from now," Mnuchin said. "This is not like the financial crisis where we don't know the end in sight. This is about providing proper tools and liquidity to get through the next few months."