Accessibility links
Protecting And Preserving Ancient Sites At Risk From Sea-Level Rise In Florida Archaeologists are working to identify historic sites that are threatened by rising sea levels in Florida. If they can't be preserved, efforts will be made to document them before they're lost.

Listen · 3:39 3:39
Protecting And Preserving Ancient Sites At Risk From Sea-Level Rise In Florida 3:39 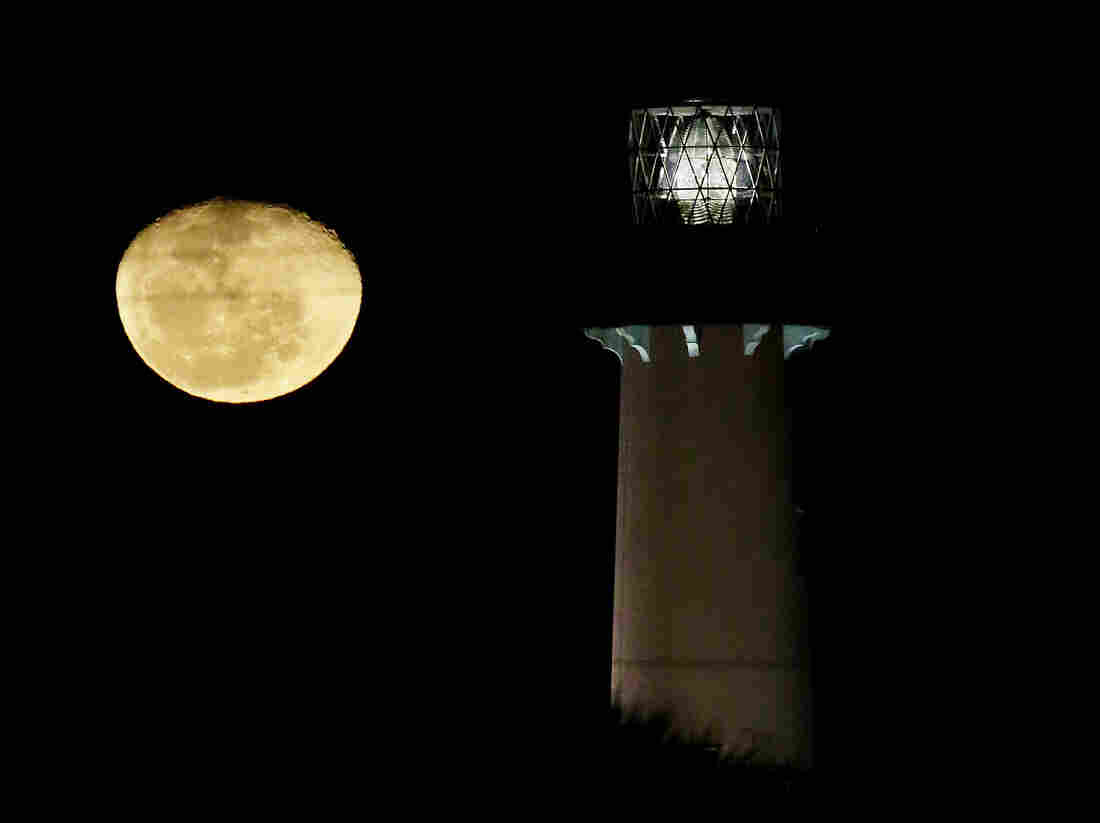 The moon, in its waning gibbous state, rises near the Jupiter Lighthouse in 2013, in Jupiter, Fla. The 108-feet tall, brick structure was first lit in 1860. The lighthouse sits atop a Native American archaeological site, which is at risk from the rising sea level. Julio Cortez/AP hide caption 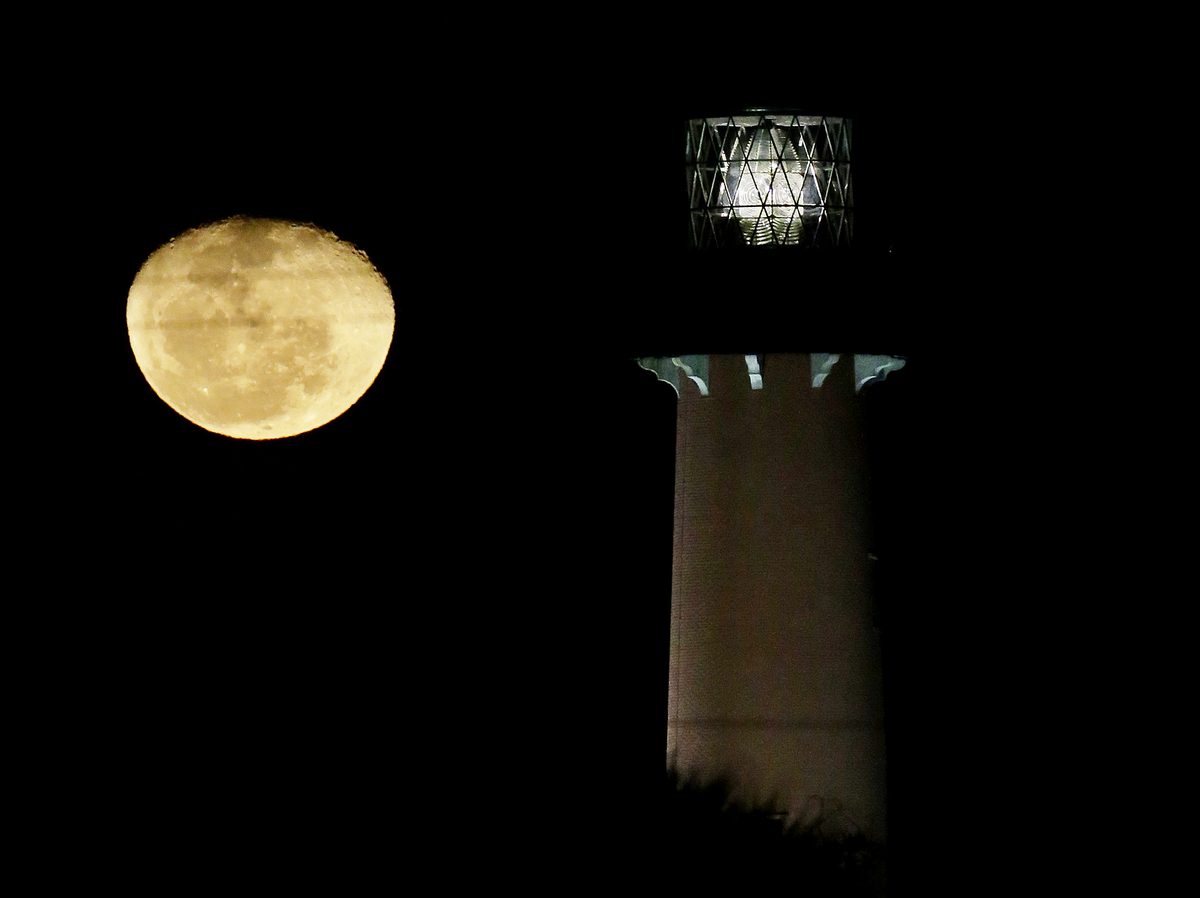 The moon, in its waning gibbous state, rises near the Jupiter Lighthouse in 2013, in Jupiter, Fla. The 108-feet tall, brick structure was first lit in 1860. The lighthouse sits atop a Native American archaeological site, which is at risk from the rising sea level.

Long before condominiums lined the shoreline in Miami Beach, before air conditioning, many thousands of years before Columbus, people lived along Florida's coastline.

Archaeologists say the remains of their settlements are particularly vulnerable to rising sea levels as a result of climate change.

In Florida's Palm Beach County researchers are planning how best to protect and preserve the ancient sites most at risk from rising seas.

One of the sites is at a county park in Boca Raton where the playground and the public beach are the main attractions.

Most visitors are unaware that it's also one of the oldest settlements in America.

"Basically under our feet is where the site is," archaeologist April Watson says as she ducks under branches and sweeps away leaves.

Thousands of years ago, this was part of an extensive village complex.

"This particular spot is a shell midden," Watson says. "Basically they were eating. They got a lot of shellfish, giant coquina which takes diving. They're about 18 feet down. And then as time went on, they were mostly going for oysters."

How Do You Preserve History On The Moon?

Working with her students from Lynn University, Watson excavated sections of this ancient settlement. She and her collaborators are now dating and analyzing the artifacts. It was the first time in nearly a half century archaeologists had worked there. But as sea-level rise increases, Watson says there's a new urgency to investigate sites that at some point will be underwater.

About 50 miles north on Florida's Atlantic coast, the Jupiter Lighthouse sits atop another Native American settlement.

"It's been occupied for 6,000 years which is pretty cool, continuous occupation," Sara Ayers-Rigsby, with the Florida Public Archaeology Network, says.

Along with the Historic Preservation department in Palm Beach County, she's been identifying sites most at risk from sea level rise. This pre-Columbian settlement tops the list.

The shoreline here is eroding at an accelerating pace, in some areas up to seven feet a year. Some of that is from storms and boat wakes. But Ayers-Rigsby says the rising sea level and record high tides are also factors that are washing away bits of Florida's history.

"I know the last time my coworker was out leading a kayak tour...she actually saw pottery eroding out of here," she says. "So, we'll come out and we'll see cultural material just being washed away into the sea."

Peter DeWitt with the Bureau of Land Management, which oversees the lighthouse and the ancient sites here, says work will begin soon on a project aimed at stopping or at least slowing the erosion.

"They're going to be installing a 'living shoreline,'" DeWitt says, "which includes in-water structures to attenuate wave action as well as mangrove and salt marsh planting to try to stabilize the sand in place."

In Palm Beach County alone, Sara Ayers-Rigsby says more than 200 archaeological sites will be damaged or inundated by a three-foot rise in sea level that's expected by the end of the century.

Statewide, more than 16,000 sites are at risk and Ayers-Rigsby says preserving all of them just isn't possible.

That means full archaeological investigations where possible, more limited measures in other cases. This kind of work, protecting historic and archaeological properties from sea level rise, in going on is some other countries, notably Scotland. In the U.S., archaeologists are raising alarms about vulnerable coastal sites from Louisiana to Virginia. But particularly in Florida, Lynn University archaeologist April Watson says there's a lot at stake.

"A lot of people think that Florida doesn't really have much of a history," she says. "But we actually have some of the oldest sites in the country. People were building mounds in Florida before they were building the pyramids in Egypt."

Among the things Watson says we can learn from the work, is how ancient Floridians adapted to sea-level rise.

A previous version of this story misstated the name of Sara Ayers-Rigsby as Sara Rigsby-Ayers.