Accessibility links
Coronavirus Fears Prompts Biden And Sanders To Cancel Election Night Rallies As the number of confirmed coronavirus cases continues to climb, election officials and candidates are weighing how to make sure the political process doesn't become the next casualty of the virus. 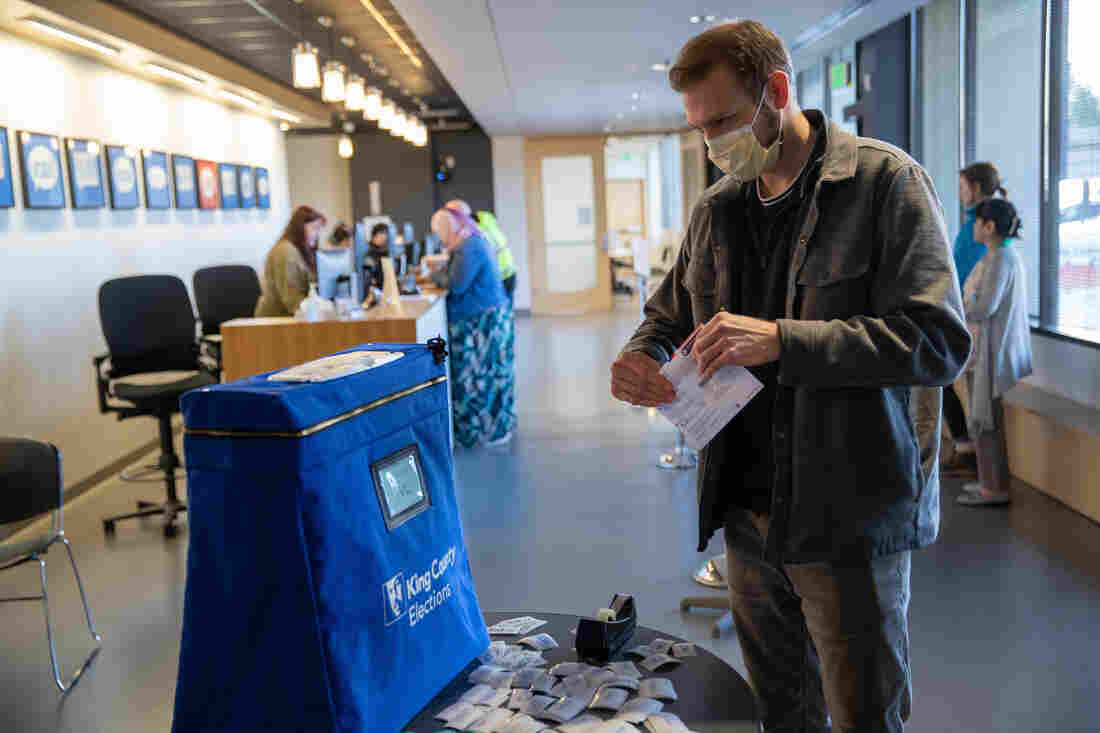 Taylor Miller prepares to cast his ballot during early voting on Monday in Renton, Wash. King County has had the highest number of deaths in the U.S. linked to the coronavirus outbreak. John Moore/Getty Images hide caption 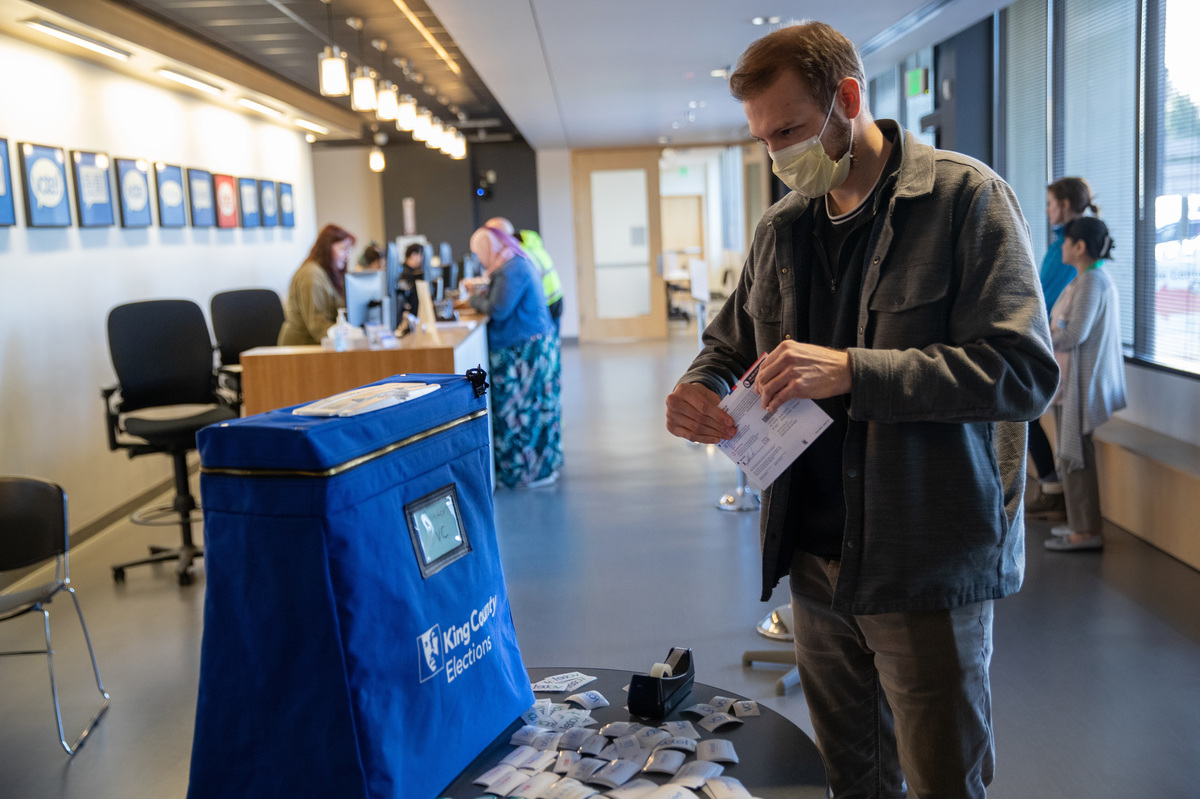 Taylor Miller prepares to cast his ballot during early voting on Monday in Renton, Wash. King County has had the highest number of deaths in the U.S. linked to the coronavirus outbreak.

Bernie Sanders and Joe Biden have canceled their respective rallies tonight in Cleveland, Ohio, with the campaigns citing public health concerns amid the coronavirus outbreak.

"Out of concern for public health and safety, we are canceling tonight's rally in Cleveland," Mike Casca, Sanders' communications director, said in a statement. "We are heeding the public warnings from Ohio state officials, who have communicated concern about holding large, indoor events during the coronavirus outbreak. Sen. Sanders would like to express his regret to the thousands of Ohioans who had planned to attend the event tonight."

Added Kate Bedingfield, the Biden campaign's deputy campaign manager and communications director: "In accordance with guidance from public officials and out of an abundance of caution, our rally in Cleveland, Ohio tonight is cancelled. We will continue to consult with public health officials and public health guidance and make announcements about future events in the coming days. Vice President Biden thanks all of his supporters who wanted to be with us in Cleveland this evening."

The decisions come as the number of confirmed coronavirus cases in the U.S. continues to climb. Packed public gatherings such as political rallies could pose a particular risk of virus transmission, although so far there's no sign that's taken place.

When asked Monday during a White House briefing whether campaigns should cancel big events, Anthony Fauci, director of the National Institute of Allergy and Infectious Diseases, said the answer depended on the prevalence of the coronavirus in the community.

"If you're talking about a campaign rally tomorrow, in a place where there is no community spread, I think the judgment to have it might be a good judgment," Fauci said. "If you want to talk about large gatherings in a place where you have community spread, I think that's a judgment call. And if someone decides they want to cancel it, I wouldn't publicly criticize them."

On Monday, Rep. Jackie Speier, D-Calif., said all presidential campaigns should call off large events until the coronavirus threat subsides and "lead by example!"

Until we know the extent of the community spread of the coronavirus, I call on ALL candidates for President to stop holding public rallies & large scale events. The CDC has been absolutely clear, people should not congregate in large groups. The candidates must lead by example!

Even before the election night rallies were cancelled, the major presidential campaigns were changing some practices in response to the coronavirus.

Biden told NBC News on Monday that he was changing his behavior. "If you notice in here, we did a fist bump, we didn't shake hands," he said.

President Trump said the virus wasn't changing any of his campaign plans.

"We'll hold tremendous rallies," Trump said over the weekend. "I'm not concerned at all" about the risk of coronavirus being transmitted at the events, he added.

But until now, Trump has held election eve rallies to grab attention away from Democrats in the days immediately before a primary. This week, his campaign didn't schedule a rally before Tuesday's elections.

Trump's campaign also doesn't have a rally scheduled before next week's primaries when four big states cast ballots, including three — Arizona, Florida and Ohio — that are central to his reelection.

Over the weekend, Trump campaign spokesman Tim Murtaugh said, "We do more than just rallies. And we announce new events when they are ready to be announced."

The Democratic National Committee says it does not currently plan to cancel next weekend's presidential debate between Sanders and Biden.

"We are in touch with local officials and will follow their guidance," DNC spokeswoman Xochitl Hinojosa told The Arizona Republic. "There are no plans to cancel the debate."

In Michigan, which votes Tuesday, the secretary of state's office is emphasizing to voters that there are no known cases of the disease in the state and is sharing health recommendations with local officials who run the state's 5,000 precincts.

"We're really just working with them to make sure that they have the CDC recommendations, that they know that they can maintain hygiene in their polling places while also still encouraging people to vote and without spreading fear before it's due," said Jake Rollow, the office's communications director.

His office told local precincts to regularly clean voting machines, pencils and other high-touch surfaces with alcohol and disinfectant wipes to ensure the risk of virus transmission is low while also reassuring voters. The state is also encouraging voters to "increase social distances" while standing in line and casting ballots.

In Washington state, which votes Tuesday, officials recommend that anyone casting an absentee ballot seal their envelopes using a wet sponge rather than licking the envelopes. Other states have offered similar guidance about absentee ballots.

One concern for election officials is that poll workers will either get sick or won't show up for fear of possible exposure. During last week's Super Tuesday elections, some election workers didn't show up in Travis County, Texas, citing fears of the outbreak. Those no-shows led to some disruptions and delays in opening polling sites.

Michigan said election workers should give at least three days' notice if they can't serve but also told local officials that unexpected cancellations by poll workers were likely.

Ohio Secretary of State Frank LaRose announced Tuesday that he's directed the state's 88 counties to relocate any voting sites that had been planned to be in senior living facilities for the state's primary March 17. The decision affects more than 125 locations, and officials say they're trying to identify new sites quickly so they can inform poll workers and voters of the change as soon as possible.

LaRose also encouraged the state's voters to cast their ballots early or by mail. He said county election offices will have curbside drop-off points available so voters can return their absentee ballots without getting out of their cars.

The state is also encouraging more residents to serve as poll workers because of concerns that some might not to show up. LaRose said state agencies will be sending e-mails to their employees suggesting that they consider taking the day off to serve. He insisted that it was still safe to work at the polls, where disinfectants will be used and other precautions will be taken.

But LaRose urged any poll workers having second thoughts to let their local election offices know as soon as possible. "The reality is that we expect that some may choose not to work on election day," he said.