Accessibility links
Bernie Sanders Volunteers Try To Rally Voters In Missouri Bernie Sanders' supporters are making a big push in what could be the senator's last opportunity to regain front-runner status.

Sanders' Army Of Volunteers Tries To Rally Support In Missouri

Sanders' Army Of Volunteers Tries To Rally Support In Missouri 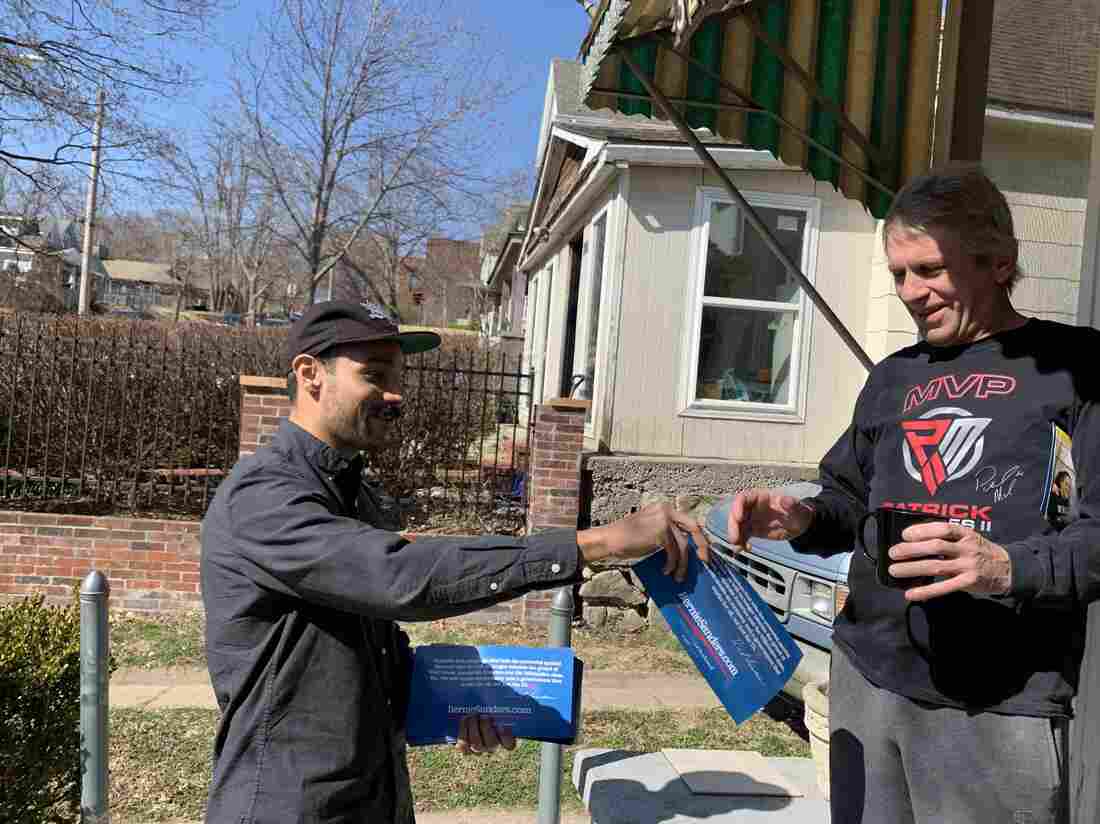 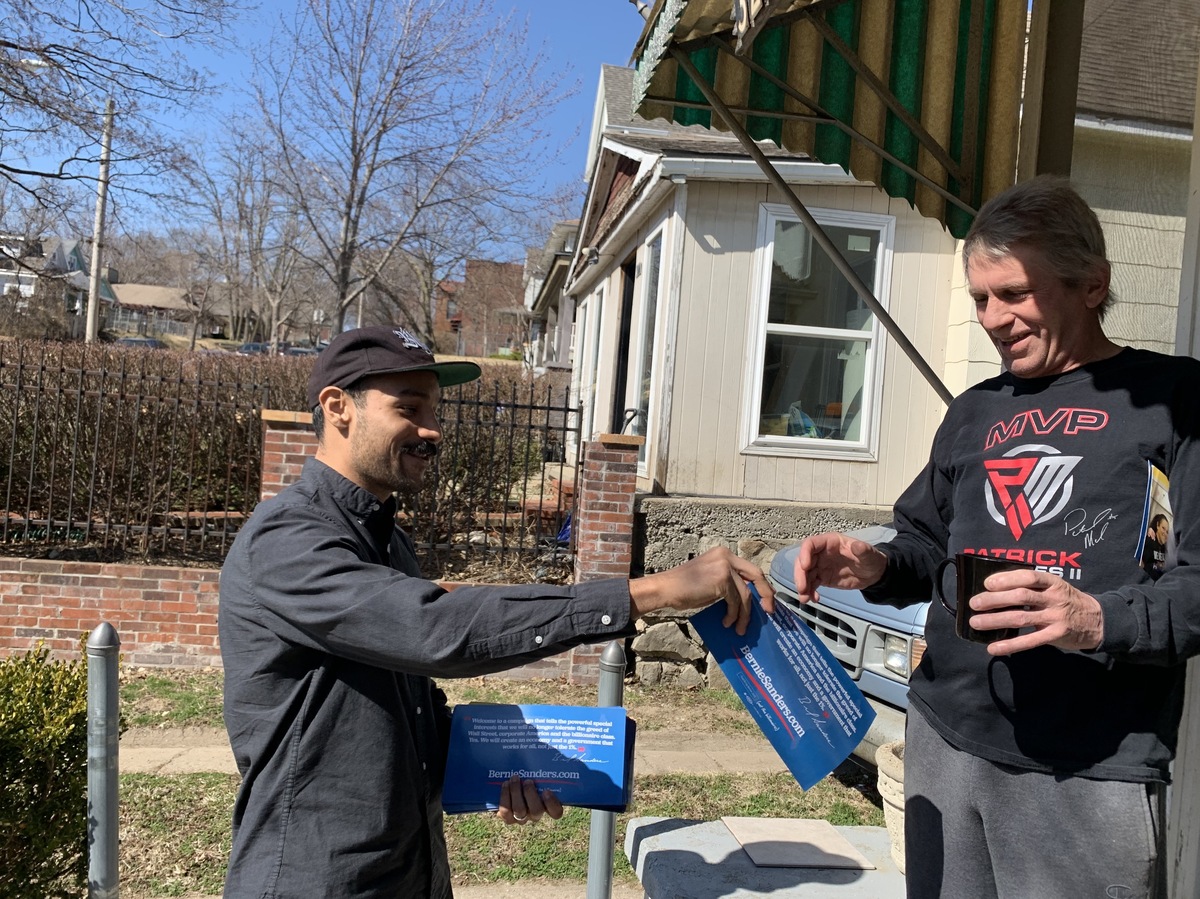 Ricardo Flores, a volunteer for Bernie Sanders, hands John Rellihan a campaign flyer in North Kansas City, Mo., on Sunday. Sanders' supporters are making a big push for him to regain front-runner status.

Ricardo Flores can't vote on Tuesday. He's not a citizen.

But Flores wants to play a role now. He figures if he can convince a few people, especially members of his own Latino community in Kansas City, Mo., to cast a ballot for his candidate — that's a close second.

"I'm going to become a citizen of this country," he says. "And I'm going to be able to vote and I have my life here now, I want to see things better."

Flores, 31, is a member of the enthusiastic army of political volunteers who have given up their weekends and put jobs on hold to visit new neighborhoods and corner strangers in hopes of persuading them to support Bernie Sanders for president.

Voters from six states are going to the polls Tuesday in what many are calling Big Tuesday. The race for the Democratic primary is now largely a two-man competition.

6 States Will Vote Tuesday For A Democratic Presidential Nominee

6 States Will Vote Tuesday For A Democratic Presidential Nominee

While the Democratic establishment coalesces around former Vice President Joe Biden, Sanders' army of volunteers is making a big push in what may be his last opportunity to regain a foothold in the race. And Sanders is depending on the strength of his volunteers to make that happen.

Sanders was in St. Louis on Monday rallying support a day before Missourians go to the polls. An Emerson College/Nexstar Media poll shows him trailing Biden by 4 points in the state, where 68 of Tuesday's 352 delegates are at stake.

Tessa Sheehan, 49, is part of a core group of supporters from Kansas City who has volunteered for the Sanders team since 2015. Sheehan recognizes the "old guard" is behind Biden, but she says her crew of volunteers won't be discouraged.

Since February, the team has knocked on more than 45,000 doors, including nearly 10,000 on Saturday, during Biden's swing through the state.

"It's we the people," Sheehan says. "The other campaigns don't have that. You know, they've got the bells and whistles and the media and the money. We have each other. And there's a lot of us. There's a lot more of us than there are with them."

Enthusiasm at the Kansas City headquarters was high on Sunday morning.

Before dispatching to their assigned "turf" across the city and surrounding suburbs, Abril Negrete, 26, led a circle of volunteers in a chant to get them ready for the day.

"We are human beings," Negrete, a labor organizer, calls out as the crowd repeats. "And we deserve full equality. Right here, right now!"

But some volunteers were feeling the pressure ahead of Tuesday's primary as endorsements for Biden continued to pour in. The news on Sunday that Kamala Harris, the California senator and former presidential candidate, was backing Biden had made its way around the office.

"It's just unbelievable that people are rallying behind Biden," says Mahra Seward, 51, a life coach who took the train from Chicago to help knock on doors in Kansas City.

She began to tear up as she talked about the recent endorsements.

"It's heartbreaking — especially progressives," she says. "If you turn on the news, it's hard to get out of bed, but despair is not an option." 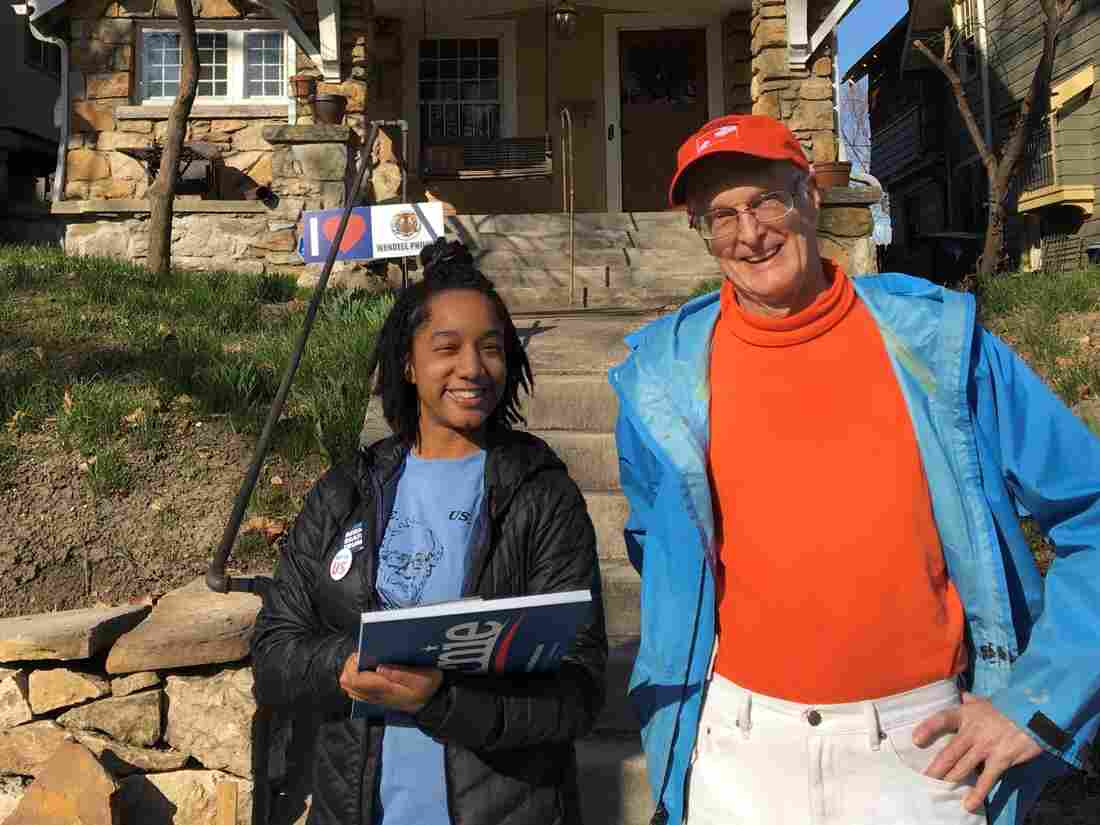 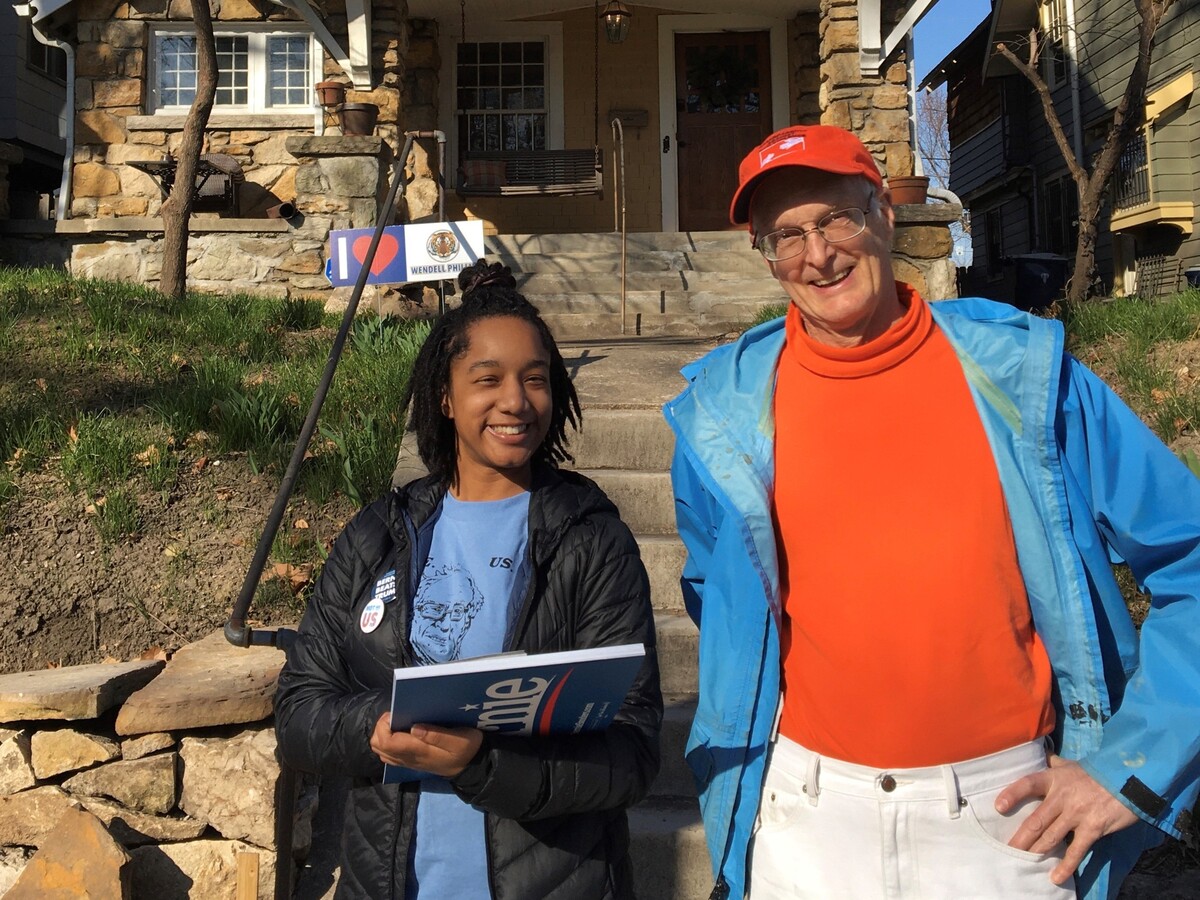 Volunteers Essence Jewel, 19, and Bill Drummond, 66, knocked on dozens of doors in the Manheim Park neighborhood of Kansas City, Mo., on Sunday.

On her second day canvassing, Essence Jewel, a 19-year-old junior at the University of Missouri, Kansas City, is hopeful.

She teamed up with Bill Drummond, 66, a longtime supporter of Sanders who says his punk rock roots draw him to the senator's brand of politics.

At their first door in Manheim Park, a rapidly changing neighborhood in southern Kansas City, Drummond gives Jewel a quick lesson on his knocking strategy.

"You knock three times with escalating volume and enthusiasm," he says. "You want it to telegraph, 'I would like to speak to you very, very, very much, but you don't want it to be the knock of doom, as in, 'Open up or we'll kick the door in.' "

Jewel tells those who answer the door about her mounting student debt and family members without health care. She says she fears she won't be able to afford having children of her own when she's older.

"I feel trapped right now and I feel like [Sanders] is the only person right now that is fighting for a future that is really livable. One day I want to own a house," she tells them. "How can I do that if I already have tens of thousands of dollars in debt?"

Around the same time in North Kansas City, Flores knocks on the doors of a mixed community that includes Latino, African and Vietnamese immigrants.

Maria Perez, 30, hugs the door and listens as Flores asks to speak about Sanders' candidacy. Three of her five children cling to her legs, and their eyes fixate on the colorful campaign flyers he hands her.

Perez admits being unfamiliar with Sanders but promises to discuss his campaign with her husband. She tells Flores he's the only person from any campaign who has knocked on her door.

Flores shakes his head. He says it's "crazy" that other candidates haven't visited the neighborhood. But he also sees it as a sign that his work for Sanders can make a difference.

"I kind of feel that if I get some people to vote that wouldn't have voted otherwise," Flores says, "you know, I kind of voted in a way."