Accessibility links
Wells Fargo CEO Charles Scharf Faces Questions From Lawmakers Charles Scharf told lawmakers that the company's structure and culture "were problematic." But he projected confidence that it could win back the public's trust after years of scandals.

Wells Fargo CEO: 'We Have Not Done What's Necessary To Address Our Shortcomings'

Wells Fargo CEO: 'We Have Not Done What's Necessary To Address Our Shortcomings' 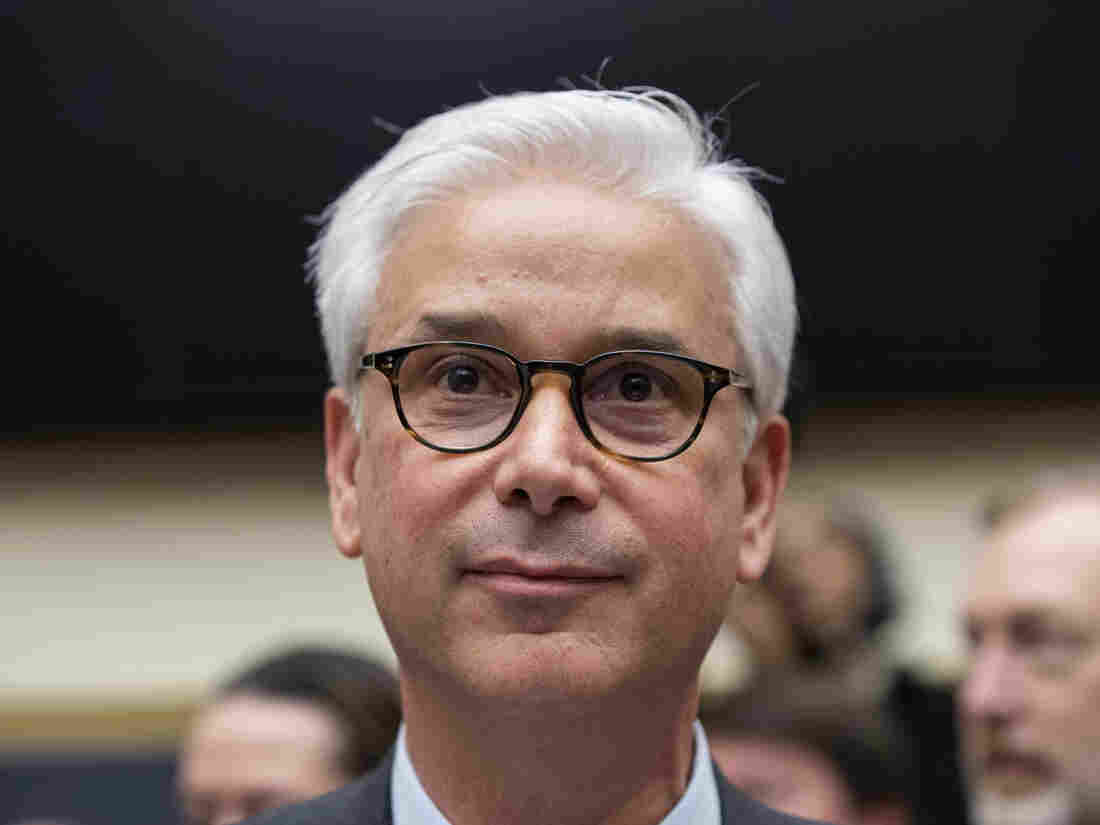 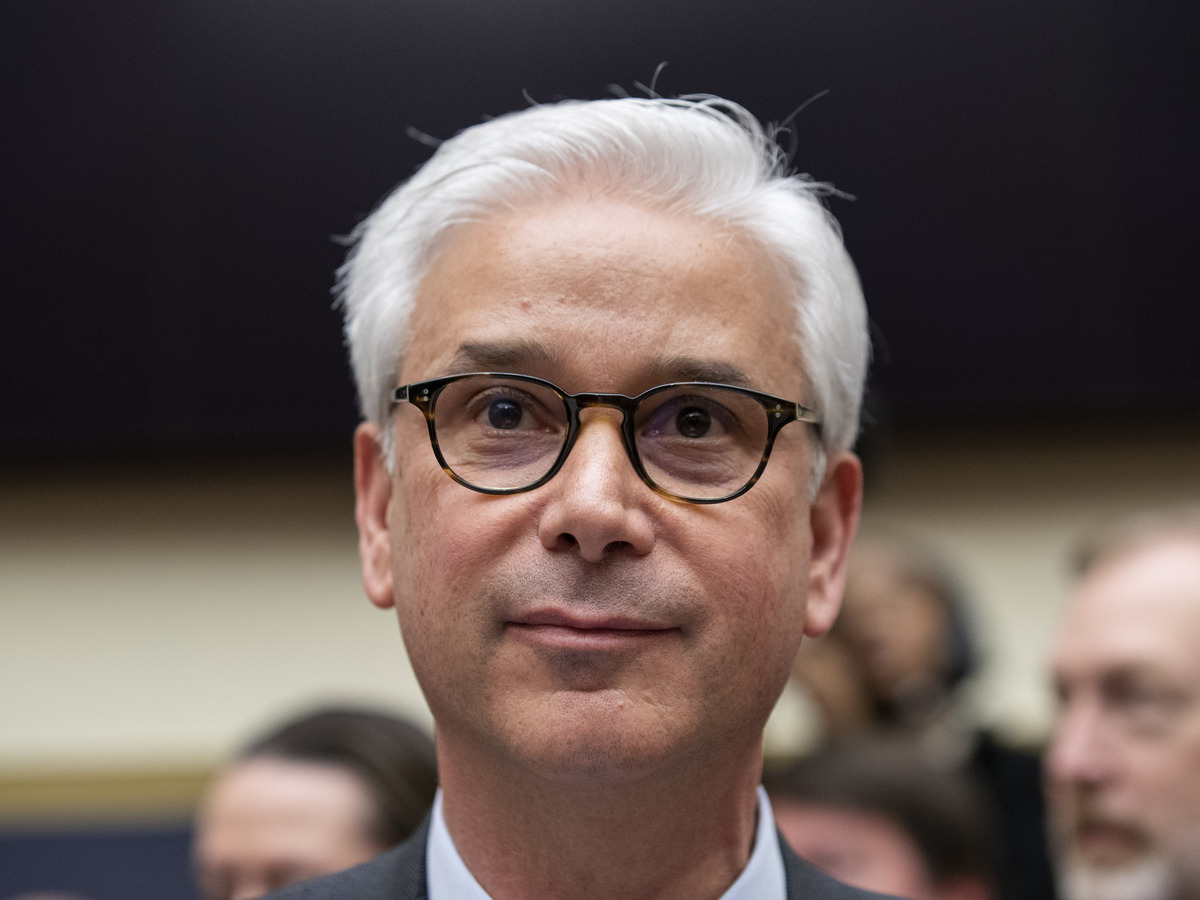 Wells Fargo Chief Executive Officer and President Charles Scharf told lawmakers Tuesday that the scandal-plagued bank he now leads "had a flawed business model" and a structure and culture that "were problematic."

He said that while he is confident that reform plans he's implementing will work, such efforts will likely continue until at least 2021.

Scharf, who was named the bank's top executive in September, was peppered with questions from members of the House Financial Services Committee for more than four hours.

Lawmakers wanted to know how he plans to steer Wells Fargo back into the public's good graces after years of cascading consumer abuse scandals. They also pressed him on how the public could trust the financial institution, especially now, as many of its customers fear devastating economic impacts as a result of the spread of the coronavirus in the United States.

"I took this job because I believe that our country and communities benefit from a strong Wells Fargo," Scharf said in his opening statement to the committee.

He vowed to move the company in a "significantly improved direction" but also admitted: "We have not done what's necessary to address our shortcomings."

Wells Fargo has been engulfed in scandals in recent years, including a $3 billion settlement last month connected to illegal sales practices. The company is still entangled in legal and financial woes stemming from a scandal that started in 2016, in which investigators found that millions of accounts were opened without customers' knowledge. 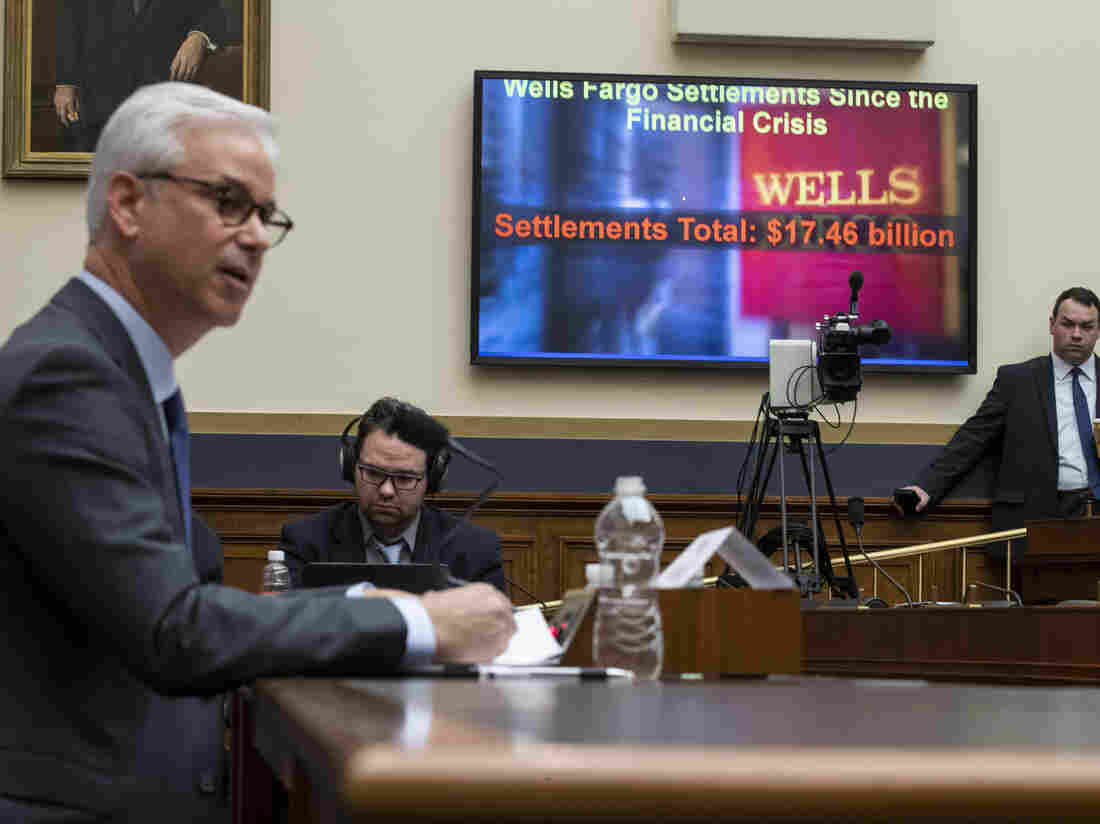 Scharf said that he took the job to lead the bank "because I believe that our country and communities benefit from a strong Wells Fargo." Alex Brandon/AP hide caption 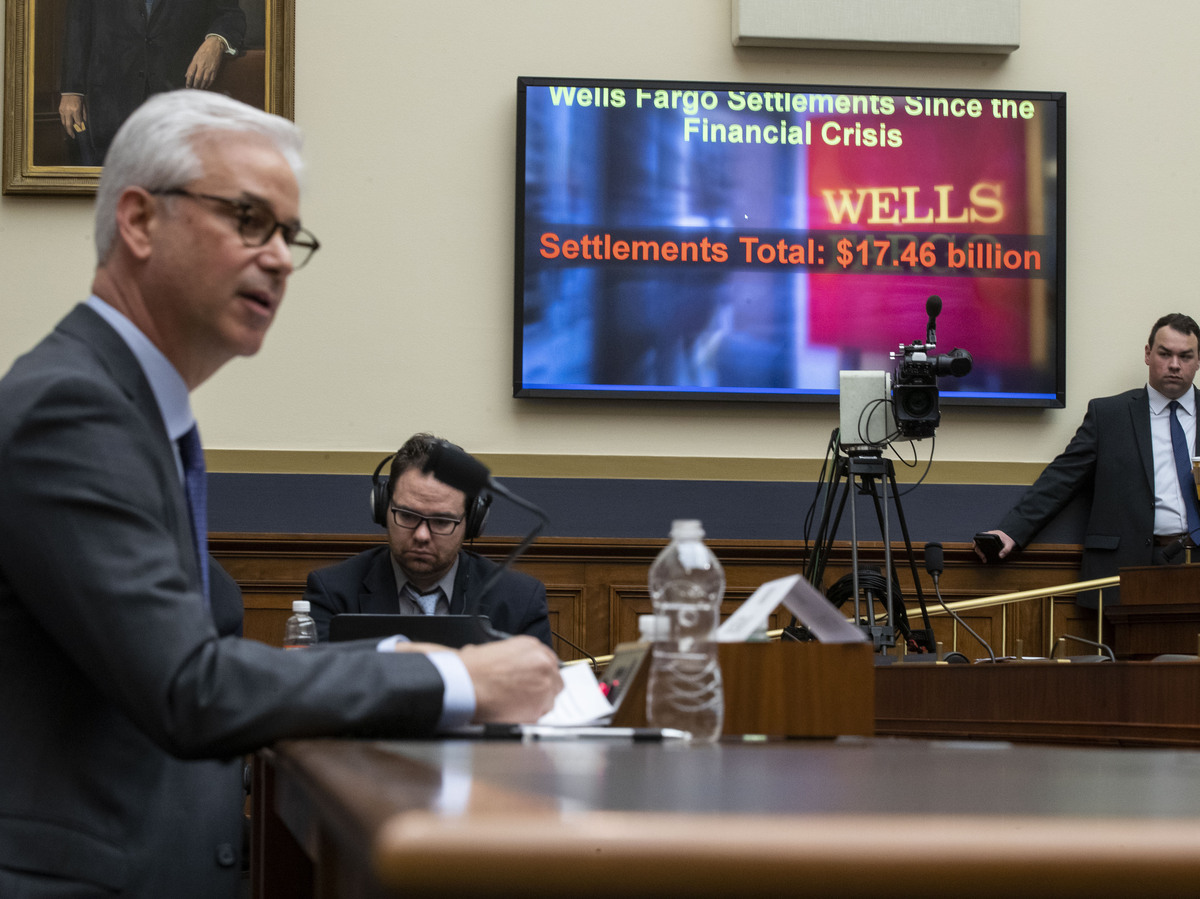 Scharf said that he took the job to lead the bank "because I believe that our country and communities benefit from a strong Wells Fargo."

Scharf's appearance on Capitol Hill comes a day after Wells Fargo announced the resignations of two board members, including the now-former chairwoman Elizabeth Duke. She and another board member, James Quigley, said they were stepping down to "avoid distraction" and allow Scharf the "ability to turn the page."

Duke and Quigley are scheduled to testify before the same committee on Wednesday. A spokesperson for Wells Fargo's board told NPR both Quigley and Duke plan to appear.

The committee's Democratic majority released a report last week accusing bank executives of failing to correct deficiencies of its infrastructure and exposing customers to "countless abuses" including wrongful foreclosure.

Rep. Maxine Waters, D-Calif., who chairs the committee, started the hearing by acknowledging to Scharf that the company has faced tumult in recent years.

Waters said the matter involves "a potential violation of a criminal statue" and urged the Justice Department to review Sloan's testimony "and take such action as the DOJ deems appropriate."

Both the Justice Department and Wells Fargo declined comment to NPR regarding the letter.

As NPR has reported, Sloan, Scharf's predecessor, resigned in March 2019, weeks after he appeared before the committee. John Stumpf, the previous CEO, stepped down in October 2016 in the fallout over the accounts scandal.

Waters pressed Scharf about whether customers who were harmed by Wells Fargo would be identified to receive payment and have their credit reporting fixed within 30 days.

Scharf said the company is in the process of trying to "remediate everything we possibly can" without giving a specific timeline. But he later added, "As of now, our plans take us into 2021 to ensure that all the payments are made appropriately."

The hearing also took place as the Trump administration is attempting to sway lawmakers in favor of a plan to stabilize the economy amid fears of a widening coronavirus outbreak. 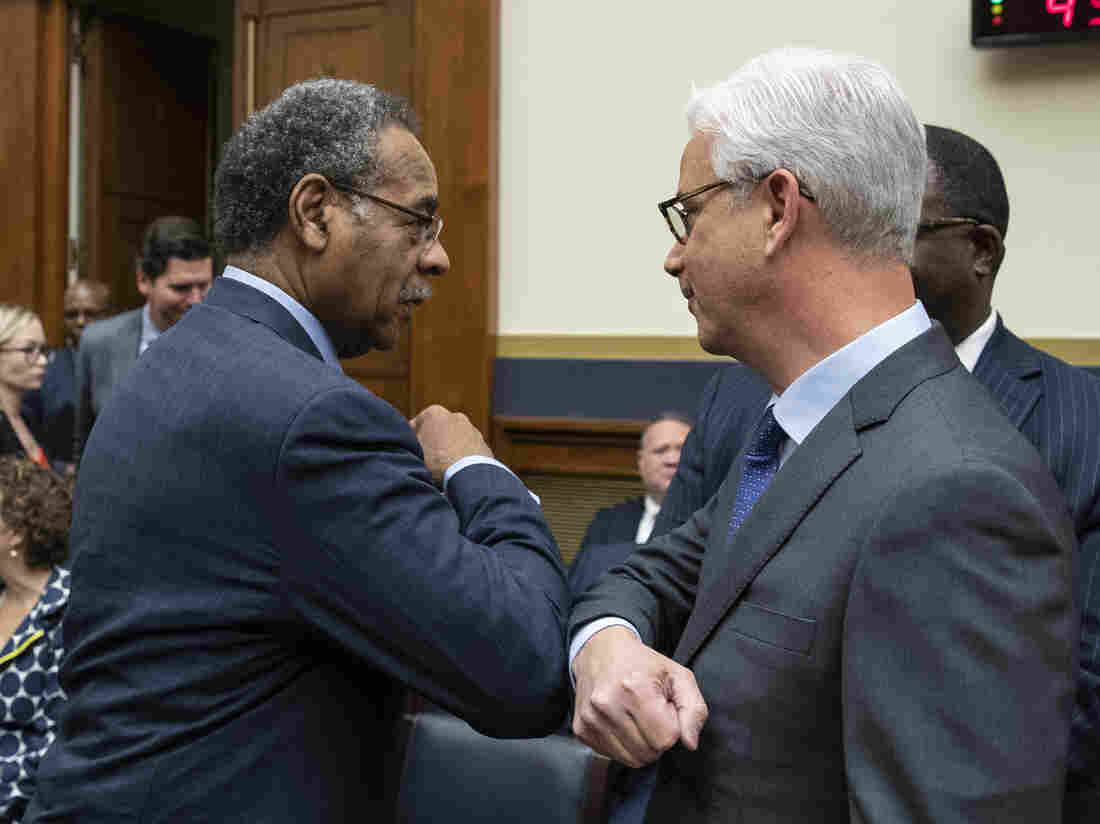 Rep. Emanuel Cleaver bumped elbows — the new alternative handshake — with Scharf before he testified during a hearing of the House Financial Services Committee on Capitol Hill. Alex Brandon/AP hide caption 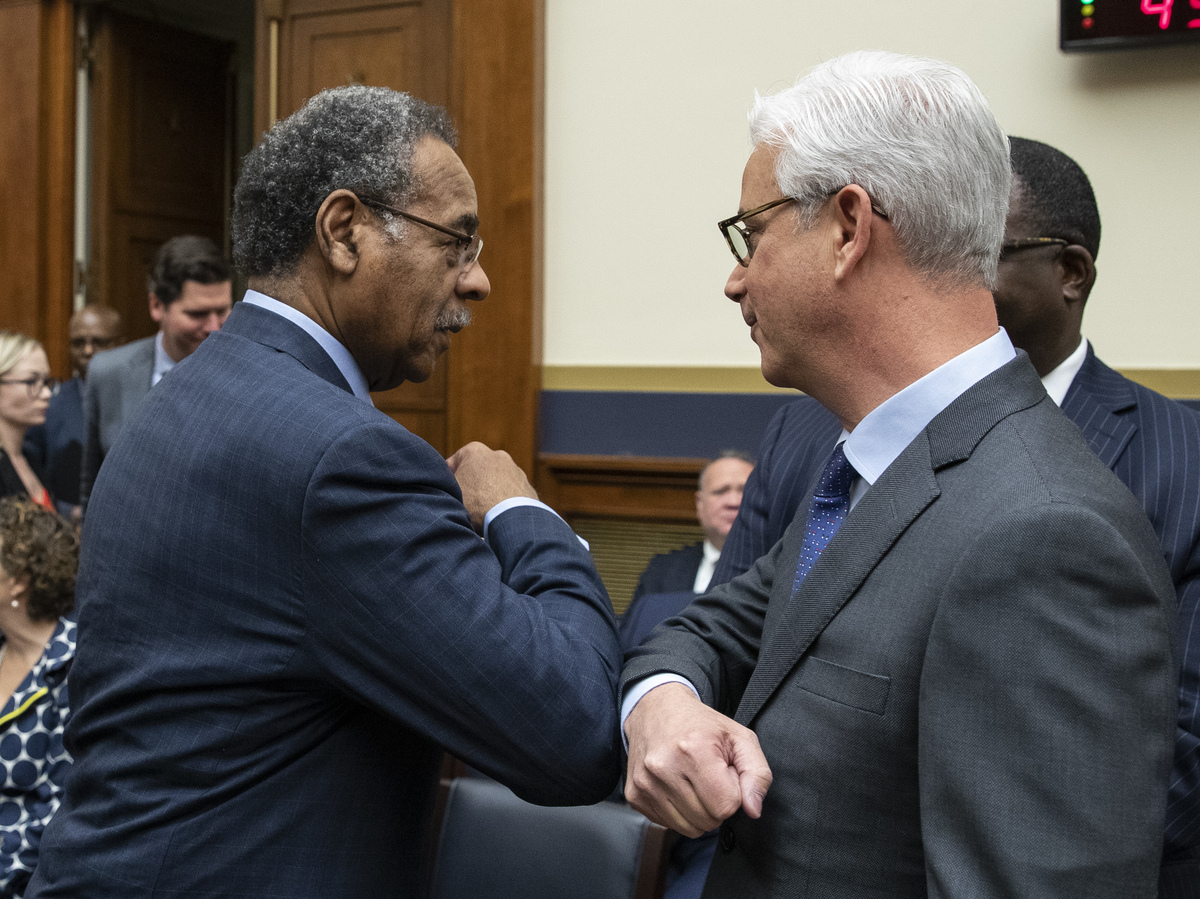 Rep. Emanuel Cleaver bumped elbows — the new alternative handshake — with Scharf before he testified during a hearing of the House Financial Services Committee on Capitol Hill.

Wells Fargo announced earlier this week that it would make $6.25 million in donations to support the domestic and global public health response to the coronavirus.

The bank's announcement did not specify whether it would provide relief for its customers if an outbreak should force workers to miss paychecks leading to late mortgage, credit card and other consumer debt payments.

"As we think about what we could be doing relative to late fees, missed payments and things like that, we want our customers to believe that we're a source of strength for them," Scharf told lawmakers.

Waters fired back, "I know that you understand we'll be looking for a lot more specificity than you have just described."

Other committee members, like Rep. Patrick McHenry, R-N.C., the ranking member on the committee, lamented that lawmakers don't have the luxury to conduct "politically motivated ideological hearings on Wells Fargo right now."

"There are serious things happening in the world while we're having this hearing," McHenry said, adding that investors fear the spread of coronavirus is impacting the financial services industry, the economy and the markets.

"Our constituents have real concerns and they expect us to put aside politics and focus on the urgent matter at hand," McHenry said.