Accessibility links
Trump Announces Ban On Travel From Europe In Coronavirus Address The moves announced Wednesday came as the White House and Congress worked on economic proposals to contain the fallout from the coronavirus. 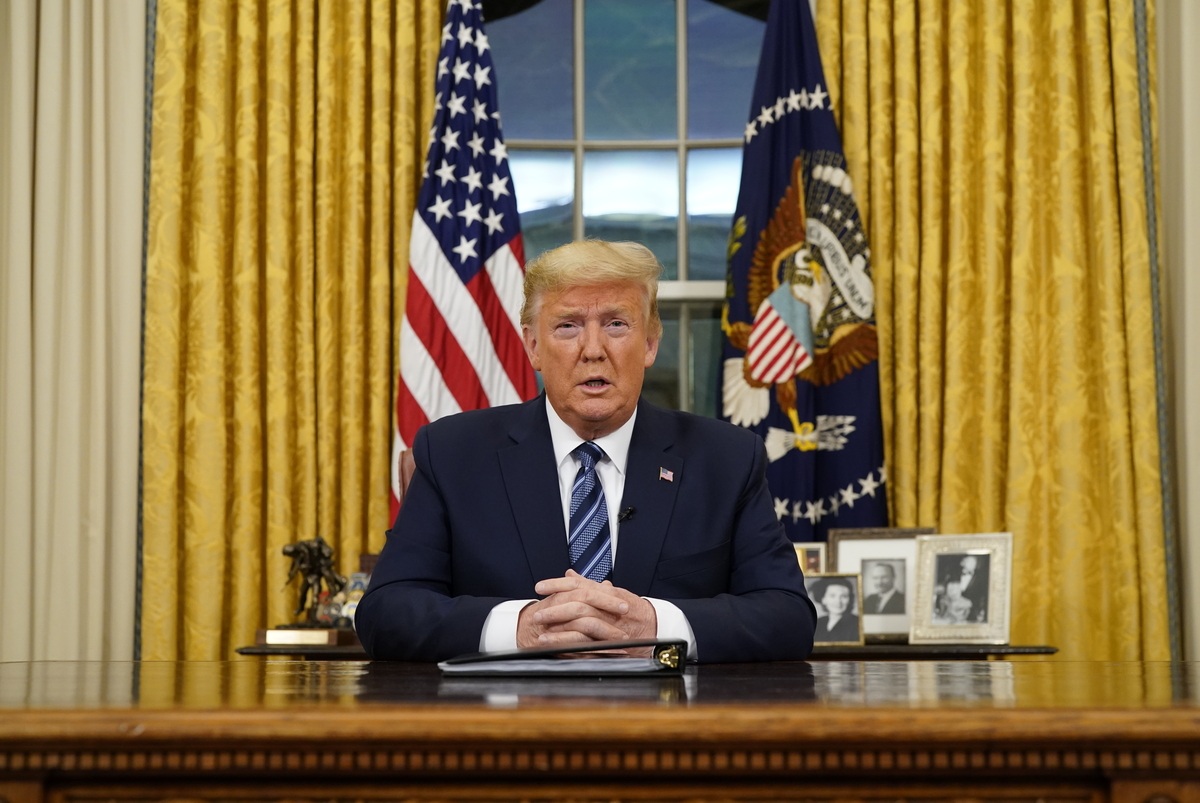 President Trump announced a travel ban on Europe amid the coronavirus pandemic during remarks issued from the Oval Office on Wednesday night.

President Trump announced a 30-day ban on travel from European countries to the United States, beginning on Friday at midnight, in a bid "to keep new cases" of coronavirus "from entering our shores."

The restrictions, he said late Wednesday, do not apply to travelers from the United Kingdom.

Homeland Security officials said the travel restrictions would only apply to foreign nationals, not American citizens or legal permanent residents, who have been in the Schengen region, which consists of 26 countries in Europe with open borders agreements, in the last 14 days. After Trump's announcement, the State Department issued an advisory informing U.S. citizens to "reconsider travel abroad" as a result of outbreaks around the globe.

Trump also announced economic measures that he said would help the country overcome "temporary economic disruptions" caused by the disease.

The president's prime-time remarks Wednesday cap a concerted effort by the White House to calm a public made jittery by the rapid global spread of the disease and the concomitant economic turmoil. Worldwide, the number of cases of coronavirus has exceeded 125,000, with more than 1,000 of those reported in the United States, where the outbreak is expected to get worse.

Trump's address followed a Wednesday announcement by the World Health Organization, which classified the outbreak a pandemic. In Washington, lawmakers scrambled to find ways to contain the economic fallout of the fast-spreading virus.

"This is the most aggressive and comprehensive effort to confront a foreign virus in modern history," Trump said Wednesday night.

"I am confident that by counting and continuing to take these tough measures, we will significantly reduce the threat to our citizens and we will ultimately and expeditiously defeat this virus," he added.

Trump explained the travel restrictions will be adjusted "subject to conditions on the ground."

Global health experts expressed skepticism to NPR over the Trump administration's travel restrictions, saying the move is not likely to hasten the containment of the virus.

"The president, counter to nearly all expert opinion, continues to treat the smaller number of known cases here (due to inadequate testing) as if it means we actually have a small number of cases and need to focus on keeping cases out," said Marc Lipsitch, an epidemiologist at Harvard University. "Now we should be racing to mitigate spread in the U.S., not wasting resources on keeping cases out."

Jennifer Nuzzo, a senior scholar at the Johns Hopkins Center for Health and Security, was equally as dubious.

"We have limited resources and need to stay focused on limiting domestic spread," Nuzzo said, cautioning that if the restrictions will require additional screening and monitoring of foreign nationals entering the U.S., then "this will undoubtedly divert resources from protecting vulnerable populations, like the elderly and individuals with underlying health issues."

Lawrence Gostin, a global health law professor at Georgetown University, put his assessment more bluntly: "It may have political value but [it] has zero public health value."

Gostin continued: "Most of Europe has the same or fewer cases than the U.S. Restricting travel certainly won't make America safer."

Parts of Europe have been hard hit by the virus.

Italy, which is grappling with the worse outbreak outside of China, has had more than 10,000 reported cases and a death toll exceeding 600. The country has instituted a sweeping lockdown and most commercial activity has stopped.

Trump's speech generated immediate confusion about exactly who and what would be affected by the travel ban.

During his address, the president said the prohibitions would apply to trade and cargo from Europe, but a White House official subsequently clarified that the new ban applies only to travelers — not goods and cargo.

Trump attempted to assuage concerns that fears about the virus were spreading to the stock market, which has been battered in recent weeks. On Wednesday, the Dow Jones Industrial Average slumped 5.9%. The slide moved the market decline from a correction to a bear market, which traders usually define as a drop of 20% or more from a recent high point. It marks the first time since the 2008 financial crisis that the Dow dipped into bear market territory.

"This is not a financial crisis," Trump said. "This is just a temporary moment of time that we will overcome together as a nation and as a world."

In an attempt to ease the financial strain on working Americans and small businesses, the president offered a handful of proposals he said would be presented to Congress in the coming days. These include a $50 billion program to provide low-interest loans to small businesses affected by the coronavirus.

"Using emergency authority, I will be instructing the Treasury Department to defer tax payments without interests or penalties for certain individuals and businesses negatively impacted," he added.

That step, he said, would provide more $200 billion of additional liquidity to the economy.

Trump also said he would take emergency action to provide financial relief to people who need to stay home because they are sick or quarantined or are caring for others. There were no details immediately available on that measure.

As the coronavirus increasingly disrupts daily American life — from school cancellations to companies pushing employees to work from home to cities banning large public gatherings — the Trump administration and Congress were rushing to unveil countermeasures.

Trump this week proposed payroll tax relief for hourly wage workers to shore up the economy but faced stiff resistance from congressional Democrats who argue that a payroll tax break would help the wealthiest Americans the most. Democrats are pushing paid sick leave, expanded unemployment assistance and food assistance.

At a meeting on Wednesday with bankers about how the outbreak is affecting the financial sector, Trump, who has repeatedly downplayed the severity of the coronavirus, suggested that the U.S. was blinded by how rapidly the virus is spreading.

"We're having to fix a problem that four weeks ago, nobody thought would be a problem," Trump said.

Whatever shape the economic response takes, the nation's top infectious disease experts are cautioning that the number of cases and fatalities linked to the coronavirus in the U.S. are expected to keep rising.

Dr. Anthony Fauci, director of the National Institute of Allergy and Infectious Diseases, said federal officials are working to stay ahead of the virus, but efforts have been complicated by the number of infected people entering the country after visiting other parts of the world.

Dr. Anthony Fauci: "It is ten times more lethal than the seasonal flu."

"I can say we will see more cases, and things will get worse than they are right now," Fauci told the House Oversight and Reform Committee on Wednesday.

While more than 80% of confirmed coronavirus cases are mild and the risk remains low for those who are young and healthy, Fauci emphasized just how dangerous the coronavirus can be for the elderly and those with underlying medical conditions.

The seasonal flu, Fauci said, has a mortality rate of about 0.1%, compared with the coronavirus fatality rate, which is around 1% when all available data are analyzed.

In other words, Fauci said: "It is 10 times more lethal than the seasonal flu."