Accessibility links
College Basketball's March Madness NCAA Tournaments Will Be Played Without Fans Citing fears of spreading coronavirus, the NCAA has taken the unprecedented step of banning basketball fans from attending any of the men's or women's March Madness tournament games. 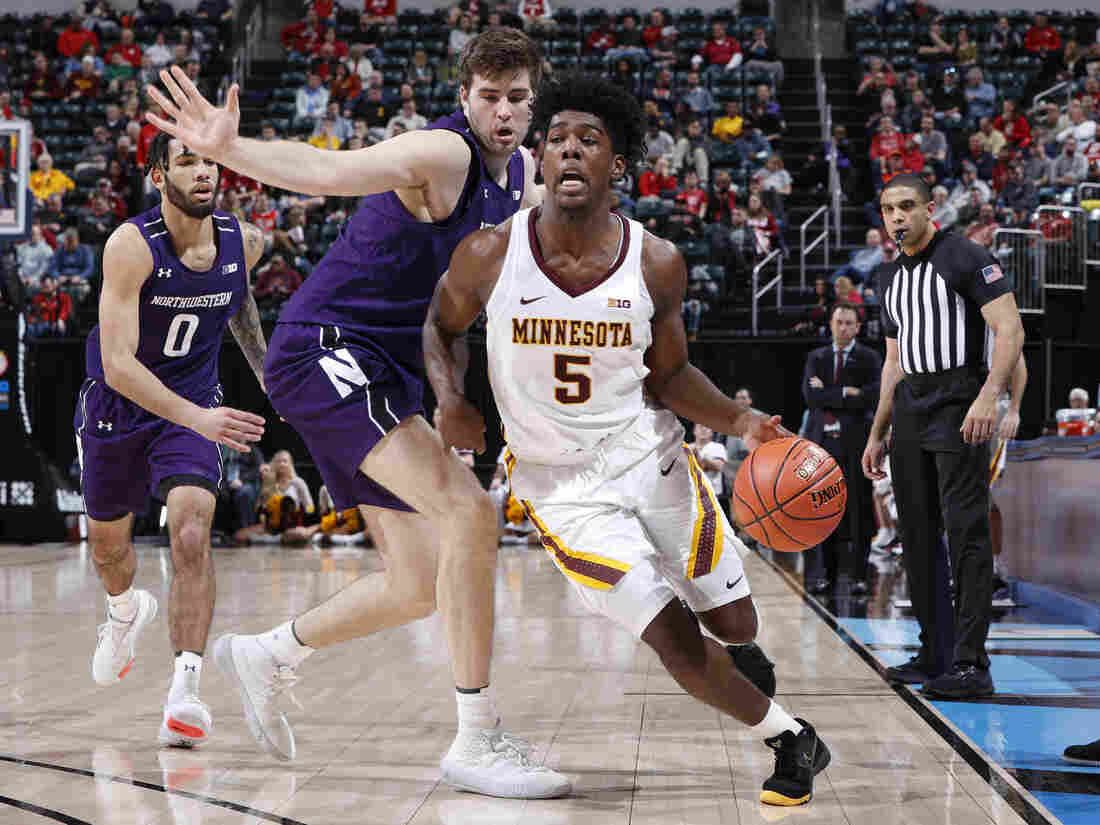 Minnesota and Northwestern played before fans on Wednesday in the first round of the Big Ten Men's Basketball Tournament at Bankers Life Fieldhouse in Indianapolis. Joe Robbins/Getty Images hide caption

March Madness is going to be very different this year. The NCAA has decided both the men's and women's Division I basketball tournaments won't be played in front of fans. The energy. The excitement. The yelling. All gone. Thanks, coronavirus.

"While I understand how disappointing this is for all fans of our sports, my decision is based on the current understanding of how COVID-19 is progressing in the United States," said NCAA president Mark Emmert. "This decision is in the best interest of public health, including that of coaches, administrators, fans and, most importantly, our student-athletes."

Only essential staff and "limited family attendance" will be permitted at any of the March Madness games. The decision is sweeping and unprecedented. This year, 68 teams are playing in the men's tournament in 14 cities from coast-to-coast. The tournament begins on March 17 and wraps up April 6 in Atlanta, Ga. The women's tournament will have 64 teams and starts March 20 and the national championship is April 5 in New Orleans.

It's thrilling to attend a college basketball game — as much for the play on the court as for the fan craziness in the stands. Spectators help to make the game what it is with thundering cheers and a shared camaraderie. So the thought of playing in front of no one is a bit different. It's true for many athletes when they step on the court, most everything tunes out and they hear nothing. But fans add that little something to any game.

As we reported earlier this week, one of the best things about live sports is that they bring big groups of people together — close together. And as the coronavirus spreads, that appeal has become a problem.

Health experts say one of the ways coronavirus moves from person to person is when people are close together for extended periods of time. This "community spreading" has ratcheted up the number of cases in the U.S., and sports leagues are wrestling how to deal with the outbreak.

Reaction to the NCAA decision rippled across the sports world to shock and disbelief. At the Big Sky Men's Basketball Tournament, Idaho State Head Coach Ryan Looney said, "As a coach, you go to a regional or you go to the Final 4, even as a fan if your team's still not playing, they're unbelievable atmospheres. To sort of think about that not being there is — wow." Still, he understands the decision, "It'll be a unique experience for sure. But honestly you gotta think of the safety and well-being of everyone."

Late Wednesday, the NBA suspended its season after a Utah Jazz player tested positive for COVID-19. The Jazz player, identified as Rudy Gobert, had not suited up for the game between Utah and the Oklahoma City Thunder. But the NBA said once it learned of the presumptive positive test, it suspended the game just before tip-off.

Now the NCAA has its own difficult decision to make — continue on with its March Madness tournaments or end the season early.