Accessibility links
Chika Is Not Here To Play Any Of Music's 'Industry Games' The 23-year-old rapper got her start with a freestyle dissing Kanye West for supporting President Trump. Her major label, debut EP, Industry Games, is a defiant statement of her non-conformist spirit. 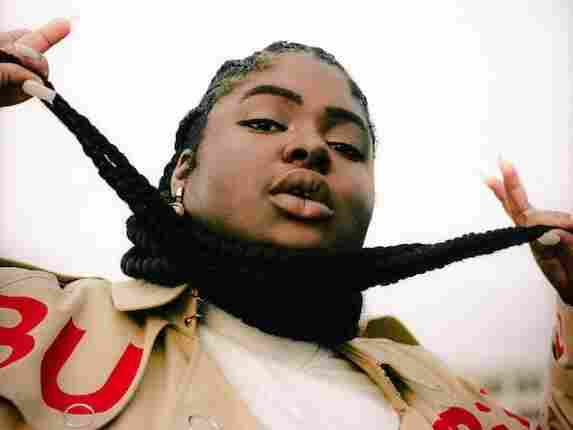 Leeor Wild/Courtesy of the artist

The 23-year-old rapper got her start with a freestyle dissing Kanye West for supporting President Trump. Her major label, debut EP, Industry Games, is a defiant statement of her non-conformist spirit.

The rapper Chika is only 23 years old, but she's already making waves. Her debut EP "Industry Games" is out tomorrow. The track that launched her career was not a finished track at all. It was a freestyle dissing Kanye West's support for President Trump.

CHIKA: (Singing) It don't matter how much money you got or you lack. When that check clears, don't forget your children are still black. And your music has been whack, and your views are moving back to a day...

CHIKA: I remember the first one that made me go whoa, was, like, Ice-T, which is really funny 'cause we just met recently, like, a couple months ago at a party. And, like, I walked by, and he was like, wait, no (laughter), and, like, hopped up and introduced me to his wife. But he was one of the first people around that point who reposted it and reached out and was like, hey, whatever you need from me, you have my support; you're an incredible MC. And I thought that was really sweet and really dope of him. I can say, though, for the most part, I missed a lot of the initial reactions to the Kanye verse because I was on a plane.

CORNISH: ...Is to do the thing and then disappear.

CHIKA: Disappear. Yeah, for sure.

CORNISH: You were enrolled at the University of South Alabama, and that's where you decided to pursue a music career. Does this mean there was a moment where you were like, I need to drop out? What was your major? And what triggered the change?

CHIKA: No, I always wanted to consider music as my main, you know, thing. But my parents were African - are African. They're still here (laughter). But...

CHIKA: They're Nigerian, yeah. And so I remember I initially wanted to go to Berklee College of Music. And so when I got in, which is a feat in and of itself to me as someone who had to - I didn't take, like, the music courses like most people. I was in musical theater, though. So when I got in, I was like, I'm not going anywhere but Berklee. And my parents were like, absolutely not, you're going somewhere that isn't $50,000 a year.

CHIKA: And so I was like, all right, well, if I'm not going to Berklee, I'm not going to college. And they laughed and said, all right, so where did you get in? And it was USA (laughter), and I didn't want to be there. And so around that - like, in March, I came home and was like, hey, look - college is just applied time, so if I apply my time elsewhere, there's no one who can say that I won't be successful. And, like...

CORNISH: Let me jump in here because you said a couple of interesting things.

CORNISH: So the first thing I heard is that you were interested in musical theater. So am I talking to a kid who was into "Guys And Dolls" (laughter) and then became a rapper? Or kind of like...

CORNISH: ...What was your thing?

CHIKA: ...And will forever be that kid. I want to make my own musical.

CORNISH: But that's great 'cause to be a rapper, you have to bring a level of theatricality, right?

CHIKA: I have to know how to write a story and how to frame a story. And I think that you learn that not only by, you know, listening to other rappers and other musicians but knowing, on a greater scale, the pacing of how a story should go and what's the most satisfying to hear. And so when I'm putting a story to, like, a two- or three-minute, even four-minute song, I can break down - it's almost like the song is a microcosm of, like, how a musical would go.

CHIKA: (Singing) I'm trying to stack all these M's. All of my idols is friends. Came to the fight with some Timbs. Will I let up? It depends. Been through the struggle. I don't run from trouble. No breaking. I just want the bands. Don't be defeated. I'm hella (ph) conceited. I run on that beat like a Benz.

CORNISH: So with that in mind, I want to talk about the song "Industry Games." What is the story of this song?

CHIKA: Story is, at that point, a snapshot of a girl who had just gotten to LA. And it's like, yo, I've seen enough a little bit (laughter) - or what I thought at that point was enough of, like, what the industry wanted of me and knowing myself, what I was not going to be able to provide, basically.

CORNISH: And what did the industry want?

CHIKA: Someone who makes the music that was selling at that point and, in some ways, still is. It's just lazy. It's really - it's lazy, and it's very just hook-dominant. And it was just like, I don't know, depressing.

CHIKA: (Singing) They don't control where I land. I'm fresher than a [expletive] and you know that. It don't take my body to show that.

Don't take my body to show that (laughter). That's what they want - like, hot body girls.

CORNISH: Can you talk about that? That's always been a part of, I think, the female rapper experience.

CHIKA: Yeah, for sure.

CORNISH: Obviously, there's been women out there from the start who didn't play that game, but it's heavy pressure to do so.

CHIKA: Yeah. I think it's just because, for male rappers, you don't have to look any kind of way. You can look literally like anything, and you will still receive the respect that you deserve, and people will still talk about your lyrics before they talk about your body. But for being a woman, it's different, and it's whack. And so for me being like, yeah, I'm dope, and you don't have to discuss my body to even reach that conclusion.

CORNISH: I grew up in the '90s listening to a lot of women who were in hip-hop and had really broken into the mainstream, right? So if you're thinking of Lil Kim, Missy Elliott, Da Brat - like, that song "Ladies Night."

LIL KIM: (Singing) It's the rap Mae West, the QB, and I got all my sisters with me.

CORNISH: Like, that was something I could see on TV, right? (Laughter).

CORNISH: Not the idea that there's only one rapper out there, but there could be a varied group of women all with a sort of different scene and angle and approach. A, do you remember that song? (Laughter).

CORNISH: You just told me, and I respect it - yes, I am old.

CHIKA: I was a actual zygote when most of this was conceived, way back.

CORNISH: OK, so way back, my child, (laughter) there were many hip-hopstress (ph)...

CORNISH: Yeah, come with me in the way-back machine. Real question - what did you listen to growing up? Who were the rappers that influenced you?

CHIKA: I actually didn't have many, which is really surprising. It's like...

CORNISH: Well, not after the musical theater thing (laughter).

CHIKA: Yeah, OK. We've eased our way into it.

CHIKA: We have eased on down the road - no pun intended. We are here now. But no, I grew up listening to reggae and, like, African music, Nigerian music...

CORNISH: Tell me about the "Crown." Being a storyteller, what is this about?

CHIKA: "Crown" was a song that was written when I was 19. I had just dropped out of college at USA, and I was genuinely working at Chipotle, chilling, writing music. And I had come out to LA, and I'd gotten basically, like, my heart - my artist heart broken in terms of having an opportunity kind of taken away from me on a trip to LA.

CORNISH: ...Or getting rejections?

CHIKA: It was more so - (laughter) it's a complicated story. But I was asked to come out for a week to do some work, and then when I got here, I was stood up by the people who asked me to come out. And it was, like, my one opportunity, and I flew myself out, and it was this huge thing. But I was, like, 19 and didn't have anything. And so at that point, I went home, and I started writing what was my first hip-hop song.

CHIKA: (Singing) This is for the kids with depression, the ones whose parental expectations got them stressing. The ones who would rather persevere, bust they a** trying to make it 'cause they ain't really living in the present. They out here grinding, seeking perfect timing...

Yeah, it's a very triumphant song because fast-forward to, like, now, like I said, it's the last song on my first project but, ironically, the first rap song I ever wrote. And so it's very upbeat. It's very - it's a victory lap. It's one of those songs that yells congratulations and also encourages people to continue what they're doing.

CORNISH: I'm glad you're taking this victory lap with "Crown."

CORNISH: (Laughter) I like that you're taking it out of the gate, an out-of-the-gate victory lap (laughter).

CHIKA: We're still tired of it, you know.

CORNISH: I'm going to put that above my desk - victory laps are still cardio. Thank you.

CORNISH: And let me know when you write a musical.

CHIKA: I'm here. If you'd like to be cast, I will make sure there's a role specifically for you.

CORNISH: (Laughter) Thank you. The rapper Chika, thank you so much for speaking with us.

CHIKA: Thank you for having me.