Accessibility links
No Handshakes: Coronavirus Changes Etiquette, Leaves Businesspeople Hanging Handshakes are out. Hand hygiene is in. The effort to stop the spread of coronavirus is changing social and workplace norms, and people are trying to figure out how to greet the people they meet. 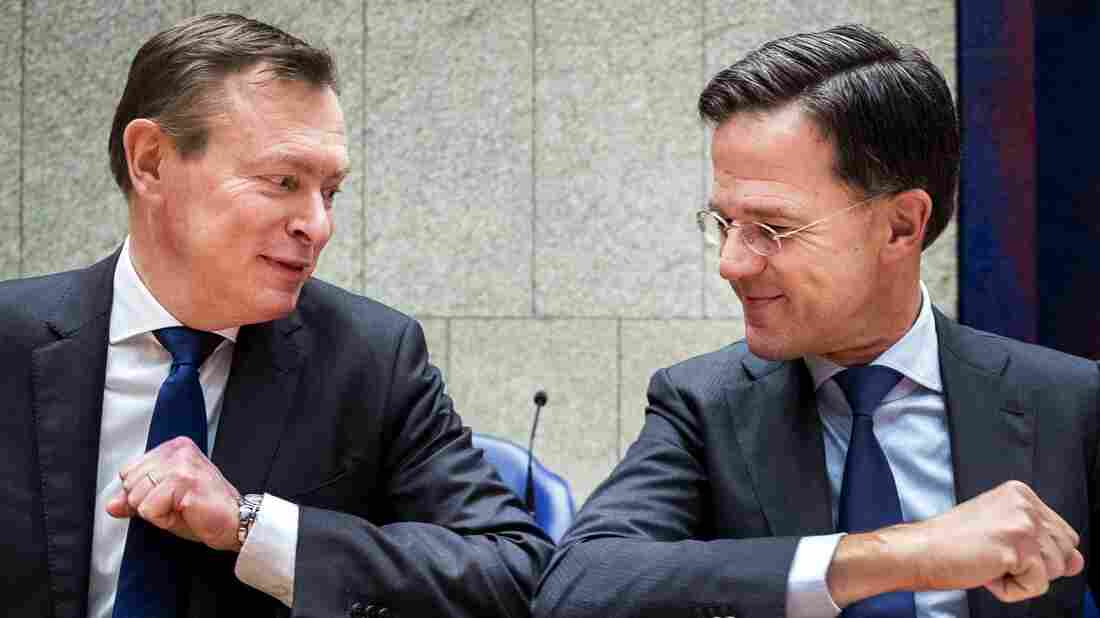 The elbow bump has replaced the handshake in many situations, including this greeting between Dutch Prime Minister Mark Rutte (right) and Dutch Minister for Medical Care Bruno Bruins in The Hague, Netherlands, on Tuesday. Remko de Waal /ANP/AFP via Getty Images hide caption 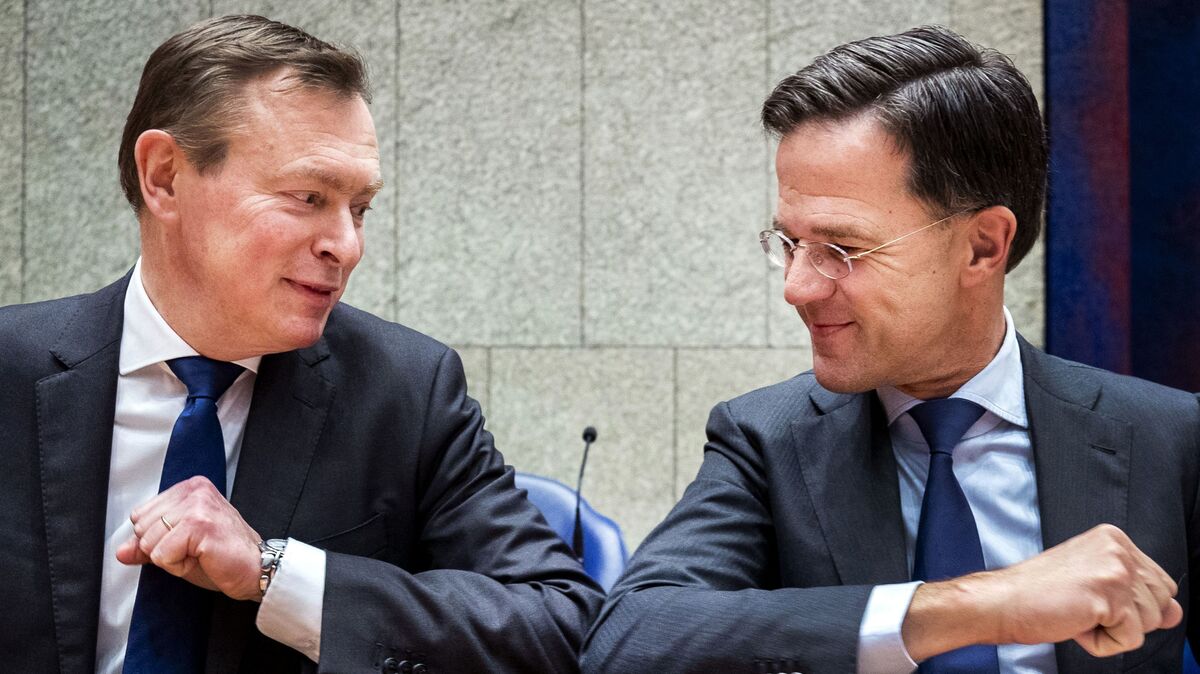 The elbow bump has replaced the handshake in many situations, including this greeting between Dutch Prime Minister Mark Rutte (right) and Dutch Minister for Medical Care Bruno Bruins in The Hague, Netherlands, on Tuesday.

The handshake, a staple of business meetings, is under siege. The coronavirus is reshaping social and workplace norms, so keeping one's distance is now the polite thing to do.

Mike Sandifer, a Realtor based in Bethesda, Md., is practicing this new, emerging etiquette. He typically offers an "elbow bump," nudging people gently with his arm. But Sandifer has to fight the deeply ingrained instinct to extend his hand.

"You know, people from the South are kind of touchy-feely. That's sort of our nature," he says. Plus, he's in real estate. "We are a handshaking crowd."

How Coronavirus Spreads: A Cough In Your Face ... Or A Kiss On Your Cheek

Hand-washing has become a global obsession, reminding Sandifer of his mother constantly telling him to sing the ABC's while doing so to ensure they were sufficiently cleansed.

Virus and disease shaped Sandifer's childhood. In the 1960s, his father tended to polio patients in iron lungs, and his mother always wore gloves — for fashion, but also for hygiene.

Now, everyone's preaching hand hygiene. And that's made the handshake taboo. England's Premier League has banned them during soccer matches. German Prime Minister Angela Merkel was left hanging after her interior minister denied her outstretched hand. This week, the Dutch prime minister announced a no-handshake rule, then promptly turned and shook a health official's hand. He then apologized.

So what replaces the handshake? That's up for grabs, so to speak. There's the fist bump. Or the elbow bump. Or a prayer gesture, which Sandifer likes.

"The namaste is sort of a nice ... . I think that that's multicultural," he says. Asian cultures — which typically bow instead of handshake — also strike a humble and nice tone, he says.

But the lack of consensus has made greeting people bewildering and, frankly, a bit awkward, and etiquette experts agree.

Thomas Farley, a New York-based etiquette consultant, says he saw this in full effect over the weekend, when he attended several hands-free greetings, including a birthday party where the host posted a sign reading: "This is a hug and kiss-free zone."

That was a coronavirus first for Farley.

"What I liked about it, honestly, was it took some of the awkwardness out of it so that the ground rules were there so that everybody could not feel like the bad person," he says.

At another party later that same day, people traded elbow bumps and foot shakes — known also as "the Wuhan shake," after the virus's epicenter. That was weird, Farley says, because this was a house where shoes are left at the door. "That made foot-to-foot contact a little bit perhaps more intimate than might be if you were actually wearing shoes," he says.

The coronavirus culture is now forcing Farley to rethink how he teaches business etiquette. One core element had been the perfect handshake: Not flimsy — but not a death grip — and certainly not clammy.

"Now, of course, we're suddenly thrust into this new era," he says, although even the new era has its limits for Farley.

"To elbow bump or chest bump. It's just ... it's not professional," he says in a tone tinged with disdain.

His personal preference? "As a Star Trek fan, I love the 'live long and prosper' greeting with the split fingers."