Accessibility links
Pelosi Vows To Bring Coronavirus Bill To House Floor As GOP Pushes For Changes The speaker was unable to get a vote late Thursday on legislation that includes paid sick leave, nutrition aid and assistance for states, including unemployment and Medicaid costs. 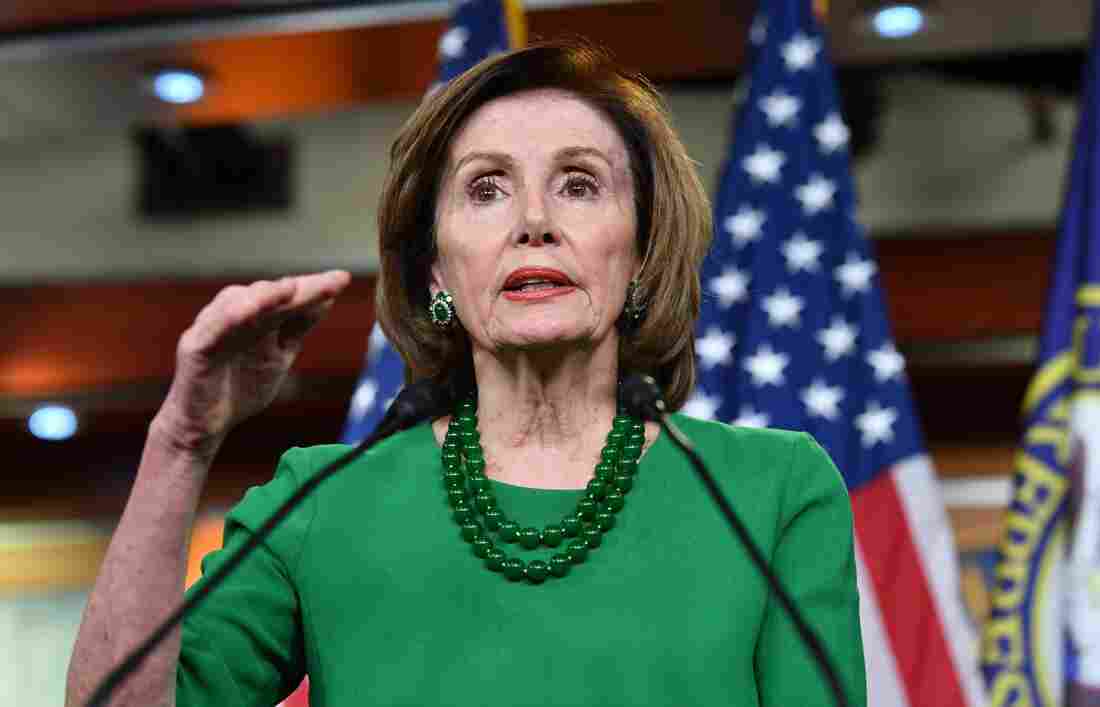 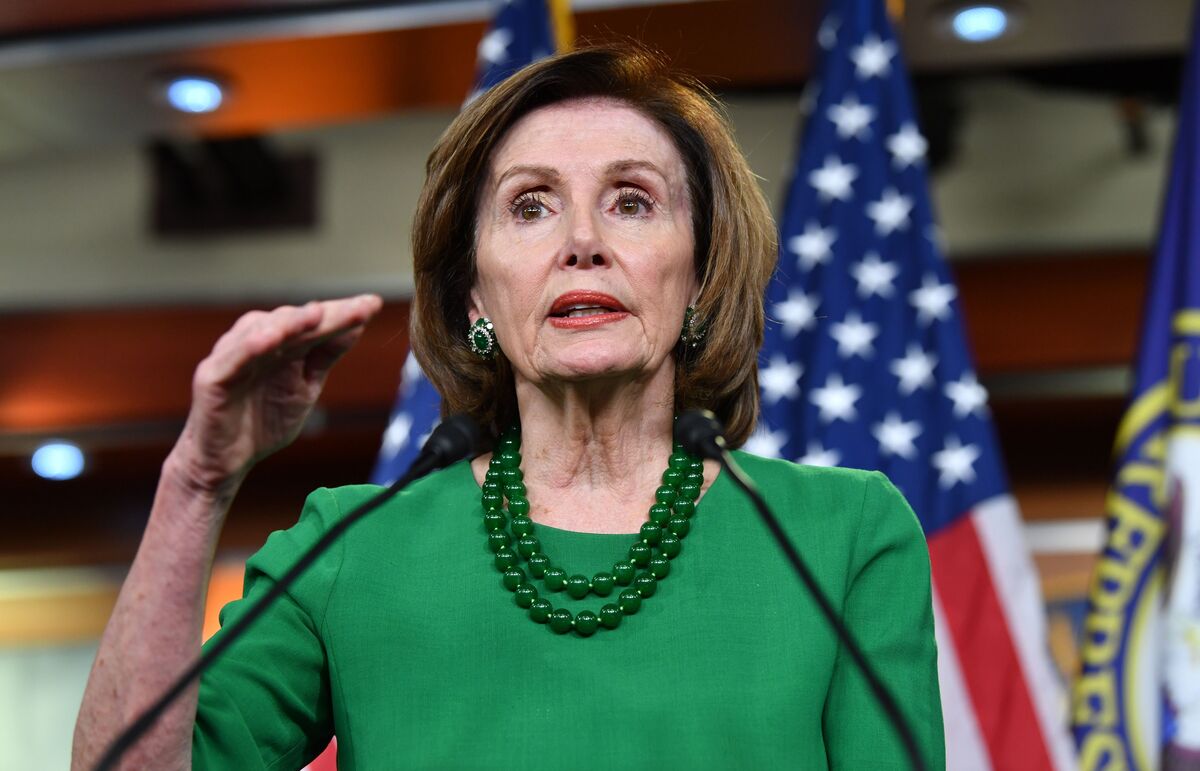 House Speaker Nancy Pelosi was unable to get a vote late Thursday on legislation that includes paid sick leave, nutrition aid and assistance for states, including unemployment and Medicaid costs.

Speaker Nancy Pelosi, D-Calif., was unable to reach a deal late Thursday on a package of measures to address the coronavirus pandemic amid pushback from the top House Republican that the bill "comes up short."

Negotiations were set to resume on Friday on the legislation, which does not include an emergency payroll tax cut — something that President Trump has been pressing for Congress to pass but that Democrats and some Republicans have rejected.

However, the deal taking shape would include free coverage for coronavirus testing, extended unemployment insurance, paid sick leave and expanded food assistance as the pandemic takes a larger toll on the U.S. and global economies.

"We have — are near — to an agreement," Pelosi said at the Capitol late Thursday.

"We've resolved most of our differences and those we haven't, we'll continue the conversation because there will be other bills," she said.

Her remarks came as Republicans on Capitol Hill and in the Trump administration pushed for changes to the measure. Pelosi said House Democrats had been negotiating with the White House throughout the morning.

"We're dealing with Democrats in Congress, we'll see what can be done," Trump said during an exchange with reporters Thursday at the White House. He said Democrats had included "goodies" in their bill "that have nothing to do with what we're talking about." He did not give details.

Republicans have offered limited changes to the bill, according to several Democratic aides involved in the talks. So far the GOP proposals under consideration would not fundamentally change the implementation of the proposals, the aides said.

Pelosi's spokesman tweeted that the speaker and treasury secretary talked twice about language for the bill.

House Minority Leader Kevin McCarthy of California told reporters the measure "comes up short." He said proposals in the Democratic measure such as sick leave would take six months to implement.

A follow up call occurred at 9:12 a.m. Language continues to be discussed. https://t.co/pW4yFwQFoq

McCarthy said that the White House, Republicans and the speaker's office were working together and that lawmakers should postpone their recess by 24 to 48 hours in order to reach a deal.

"Let's do what we can do together right now," he said.

How Coronavirus Is Affecting The U.S. Pharmaceutical Supply

"Nobody's prepared to be rolled," Cole said, adding, House Republicans weren't ready to back the bill and indicated it would have trouble getting the support of GOP senators.

As negotiations continued throughout the day on Thursday, Senate Majority Leader Mitch McConnell, R-Ky., announced the Senate would cancel its planned week-long recess next week so it could work on the legislation.

"Notwithstanding the scheduled state work period, the Senate will be in session next week. I am glad talks are ongoing between the Administration and Speaker Pelosi. I hope Congress can pass bipartisan legislation to continue combating the coronavirus and keep our economy strong," McConnell announced on Twitter.

Notwithstanding the scheduled state work period, the Senate will be in session next week. I am glad talks are ongoing between the Administration and Speaker Pelosi. I hope Congress can pass bipartisan legislation to continue combating the coronavirus and keep our economy strong.

McCarthy listed some of his concerns at a press conference Thursday. He told reporters that it would take too long to execute the program which, as written, would require companies with 50 or more employees to pay workers who are laid off, fired or are unable to work because of the coronavirus, or any public health emergency.

Republicans have privately raised additional concerns with the unemployment, Medicaid and paid family and sick leave portions of the legislation. The unemployment section of the bill would add an extra 26 weeks of benefits for states that experience an increase of 10 percent or more in unemployment rate during the crisis.

GOP lawmakers also have objections to the scope of the paid family leave benefits. Eligible workers, including people who would not be paid if they miss a day of work, would receive the benefit if they have to miss 14 or more days in a month because of the virus. It would apply to people with a coronavirus diagnosis, people who must self-quarantine, people caring for another person with coronavirus and people who must stay home because of school and child care closings.

The sweeping family leave benefits would extend for one year after the date the bill becomes law — meaning it would expire in the early months of the next presidential term. Whoever wins the 2020 election would be responsible for allowing the benefit to lapse or finding a way to extend it.

The virus affected Capitol Hill directly as a staffer to Sen. Maria Cantwell, D-Wash., became the first known confirmed case of coronavirus on the campus. The aide has been in isolation since developing symptoms, and Cantwell closed her office for cleaning, according to a statement. The aide had "no known contact with the senator or other members of Congress," the statement released Wednesday evening said.

The top House and Senate law enforcement officials announced Thursday that there would be a temporary closure of all tours of the Capitol. They also said the Capitol building and House and Senate office buildings would be limited to members, staff, press and official visitors starting at 5 p.m. on Thursday. The measures are in effect until April 1.