Accessibility links
The U.S. Investigates Possible Civilian Deaths During Baghdadi Raid In Syria The military is conducting a credibility assessment of claims of civilian casualties during the U.S. operation against ISIS leader Abu Bakr al-Baghdadi. 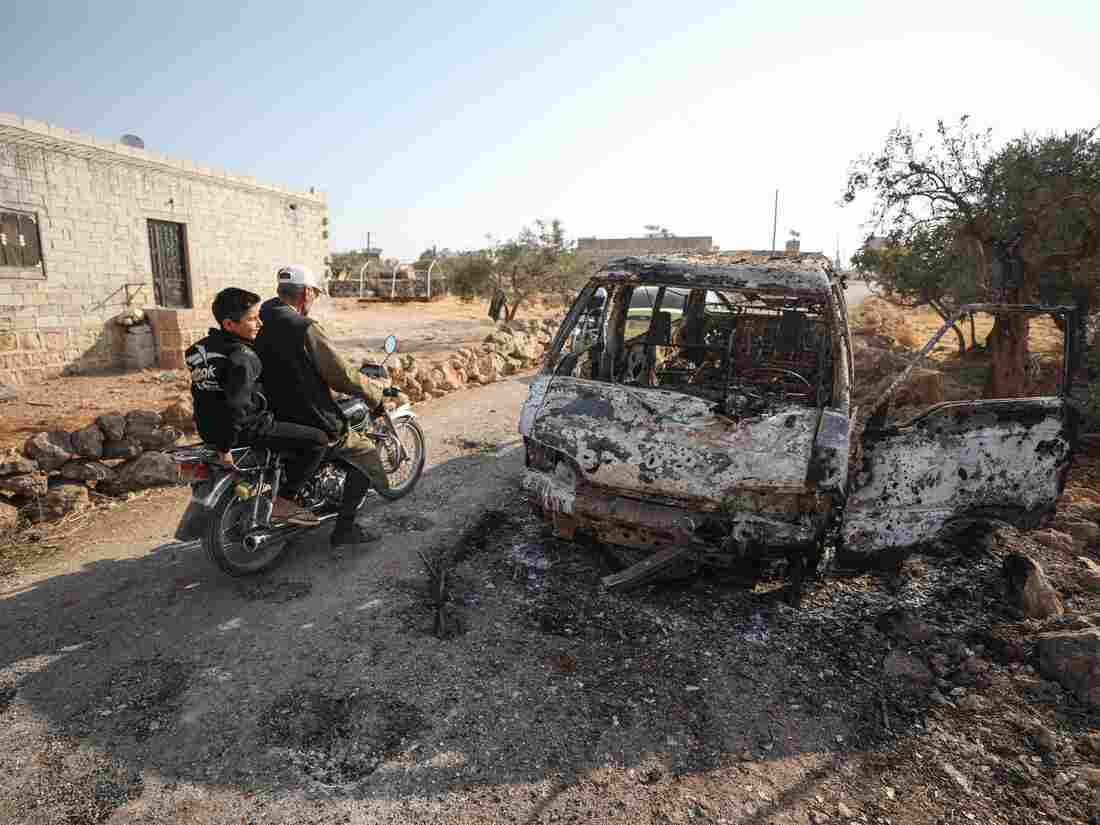 Syrians ride a motorcycle past a burned vehicle near the village of Barisha in the Idlib province of Syria, near where U.S. forces raided the compound of ISIS leader Abu Bakr al-Baghdadi. Local residents tell NPR that noncombatant civilians were killed and injured in the van the night of the U.S. raid. Omar Haj Kadour/AFP via Getty Images hide caption 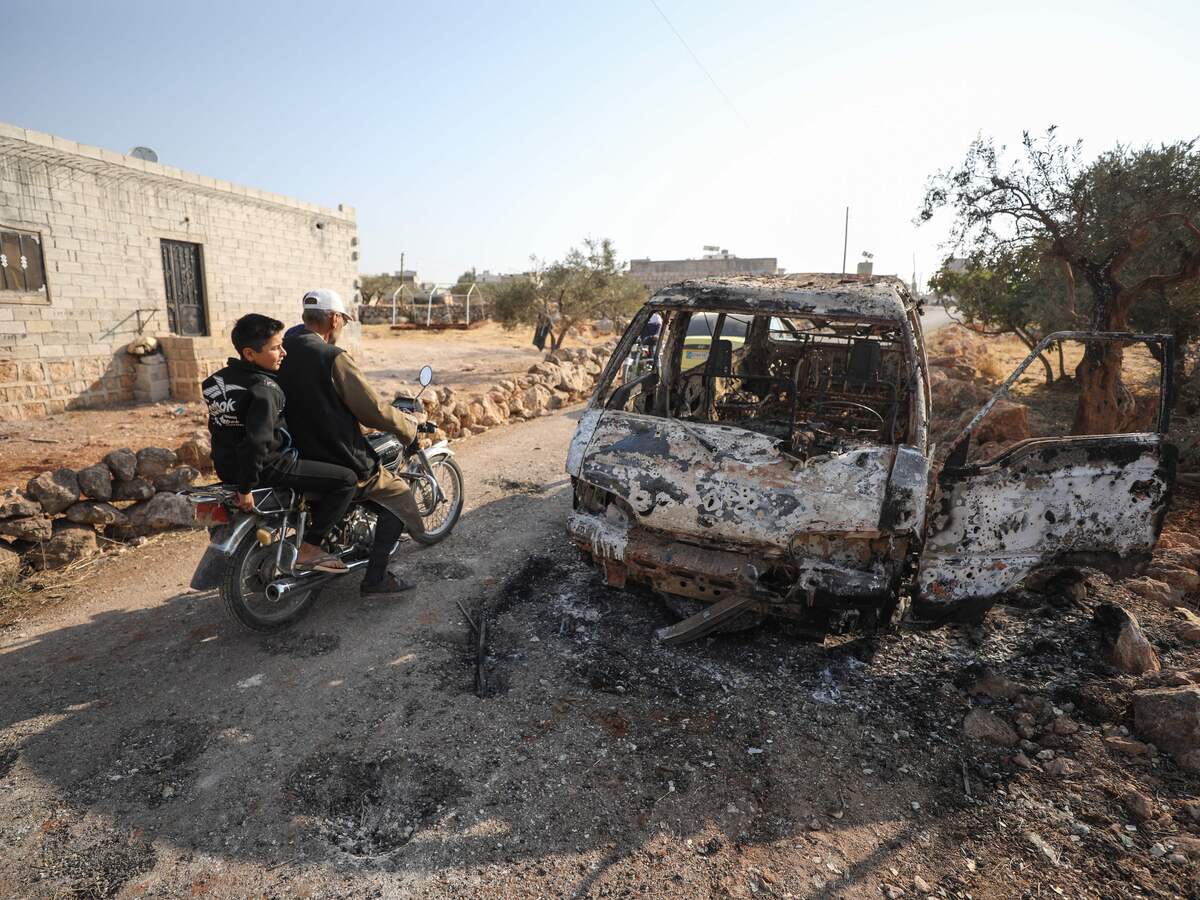 Syrians ride a motorcycle past a burned vehicle near the village of Barisha in the Idlib province of Syria, near where U.S. forces raided the compound of ISIS leader Abu Bakr al-Baghdadi. Local residents tell NPR that noncombatant civilians were killed and injured in the van the night of the U.S. raid.

The U.S. military has launched a formal investigation into claims of civilian casualties during the U.S. raid against ISIS leader Abu Bakr al-Baghdadi, a military spokesman told NPR.

The investigation was prompted by an NPR report about a Syrian farmer who said his arm was blown off and his two friends were killed by U.S. helicopter fire in the village where American special forces were attacking Baghdadi's compound in October.

"Am I Baghdadi? How is this my fault? I'm just a civilian. I didn't have any weapons. We're farmers. I make less than a dollar a day. Now I'm handicapped, and my two friends are in their graves," the injured farmer, Barakat Barakat, said after the incident.

The investigation comes months after the U.S. announced special forces had carefully executed the Baghdadi operation. "The assault force was engaged in small arms fire and the threats were quickly eliminated. Our forces isolated the compound and protected all of the non-combatants," Chairman of the Joint Chiefs of Staff Gen. Mark Milley told reporters on Oct. 28.

NPR learned of the possible civilian casualties from one of the victims' relatives the day of the raid, then collected evidence of the claim over the course of several weeks. A former Pentagon official who investigated strikes in Syria for the United Nations reviewed photos of shrapnel from the scene that relatives provided to NPR, and said it appeared the attack could have come only from Hydra-70 rockets, a type fired by U.S. military helicopters.

Relatives contacted by NPR said the men did not belong to an armed group.

In response to an NPR query in November, a U.S. defense official said initial reports suggested individuals in a van had fired at U.S. helicopters, but that the military would review the case to determine if an investigation was warranted. For three months, the military said there was no progress on the review.

In late February, when NPR sought comment for a follow-up report, a spokesman said the military's Central Command had opened an investigation. It is still ongoing, and could take weeks or months.

"They could look at things like surveillance video of the operation. They could also speak with military personnel who were involved in that operation to get a sense of what happened," said Motaparthy. "This is kind of an intermediate step."

Barakat, who survived the attack, said last week he did not know the U.S. had launched an investigation into his case.

"I thought the issue had been forgotten. I did not expect it was possible the American people would forget this issue," he said by phone from northwest Syria. "Now I feel there is someone caring about my life. There is humanity in the American people."

Barakat has struggled to get used to his new life. His right arm is gone, and his left arm was hit by shrapnel, leaving only his pinky finger functioning. "When I want to wash my face, my wife washes it. When I want to eat, my wife rolls up the piece of bread and feeds me," said Barakat.

His friend, Mostafa Mirshid Shabaan, held up the cellphone for Barakat while he spoke. "We used to play cards together. Now it is not easy to drink tea with him," Shabaan said. He contacted several aid groups to get help for Barakat, he said, but none gave any assistance.

Barakat lives near Idlib, a rebel-held area under attack for months by the Syrian regime. There are no U.S. troops in the area for him to contact with an appeal. He won't approach a hospital to seek medical treatment, because hospitals in the area have been bombed.

More than a million Syrians have been displaced from Idlib province since December, some of them now in tents surrounding Barakat's home in the village of Hattan. It's the biggest humanitarian crisis of the long-running civil war.

He says his two friends who were killed in the attack left behind wives to take care of their kids.

Barakat refuses to tell his five young children what happened to him. He tells them he got into a fight with a friend. He doesn't want them to think about war. He is ashamed he can no longer work to support them.

"I lost my hand. God determined my destiny. But what is the sin my kids committed that now their future isn't guaranteed?" he said.

Before ending the phone call, he asked if there were any chances the U.S. would help him provide for his children.

The U.S. has taken responsibility for past civilian casualties in Syria, but experts say very few families have received money.