Accessibility links
Trump Declares National Emergency As Coronavirus Fears Grow The move frees up as much as $50 billion to help states deal with the crisis. But Trump overstated the readiness of a website to help anxious people find testing. 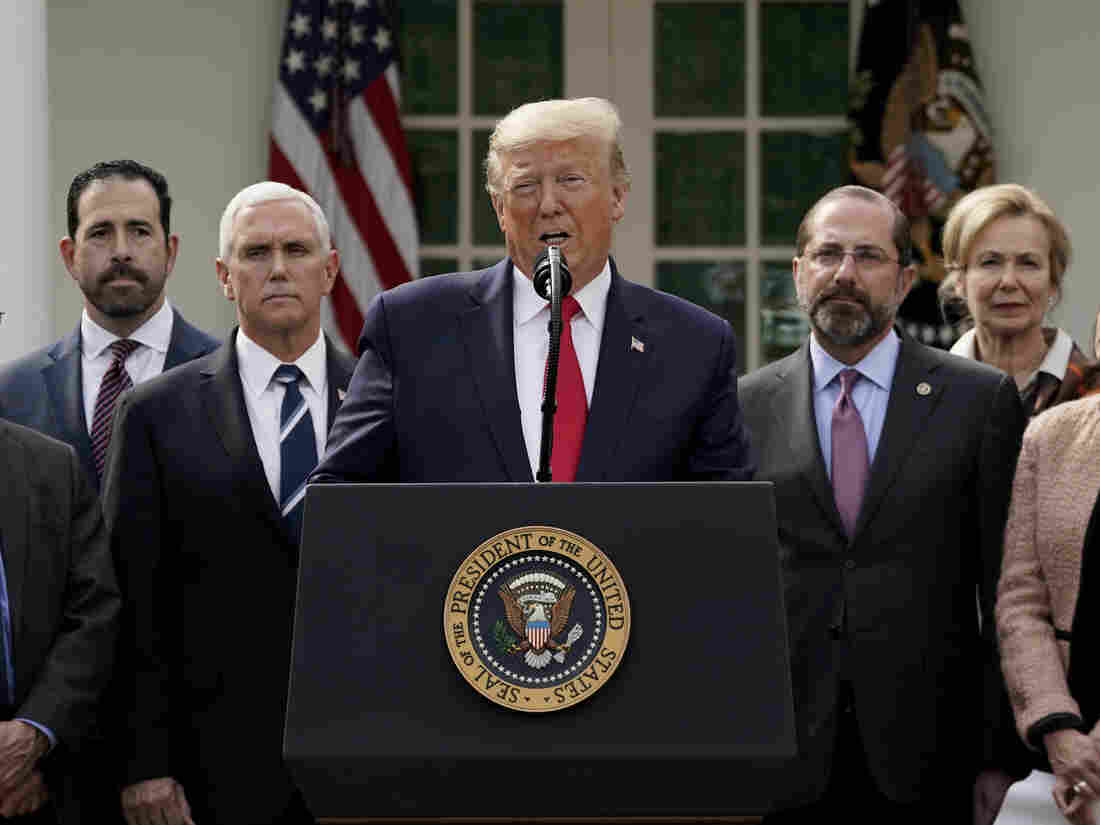 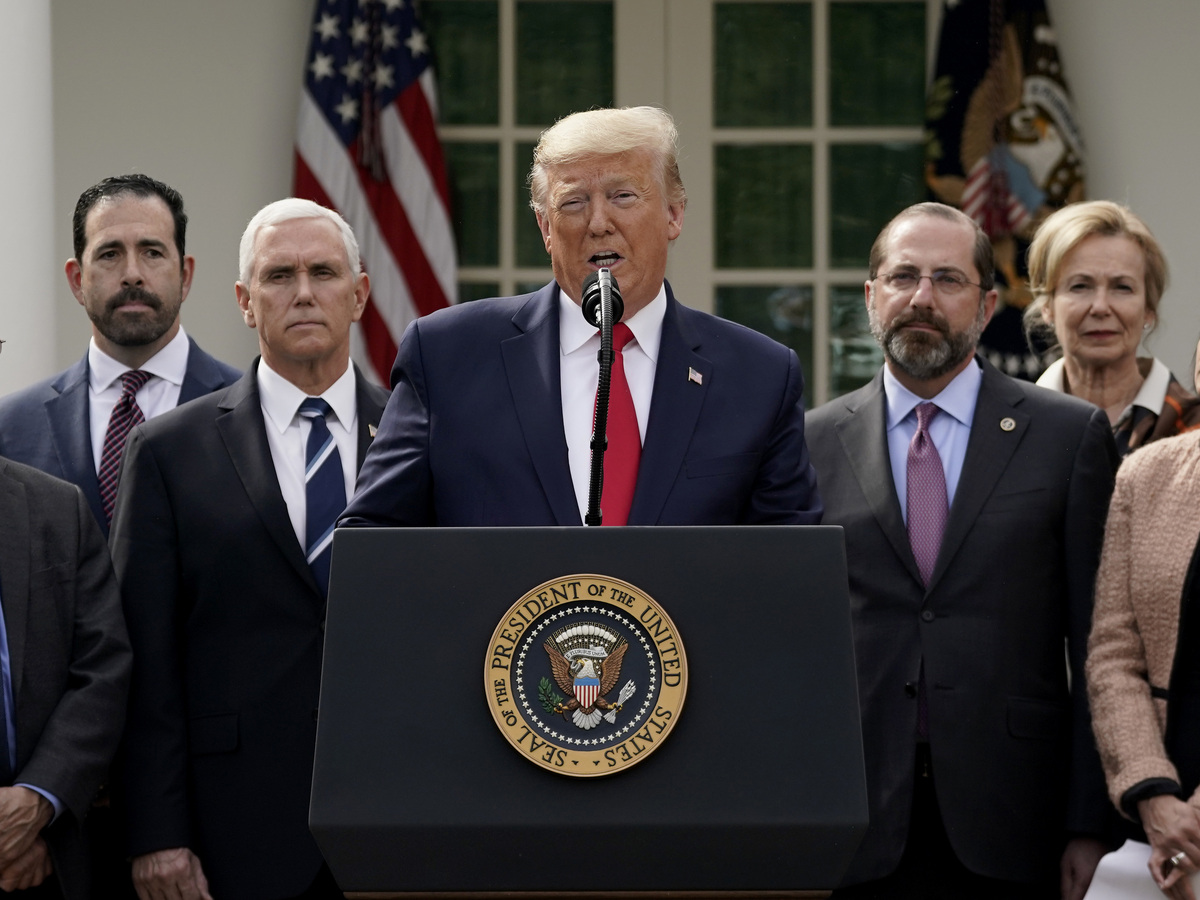 President Trump holds a news conference about the ongoing global coronavirus pandemic in the Rose Garden at the White House on Friday.

President Trump on Friday declared that the coronavirus pandemic is a national emergency, a designation that frees up as much as $50 billion in federal assistance to state and local governments overwhelmed by the spread of the virus, and makes it easier to surge medical resources to areas that need them most.

After weeks of criticism over a shortage of diagnostic tests for the virus, Trump and his officials worked to assure anxious Americans that it would soon be easy for people showing symptoms to get tested, describing a surge in test production, and a website that would direct people to drive-through test sites set up in Walmart parking lots. 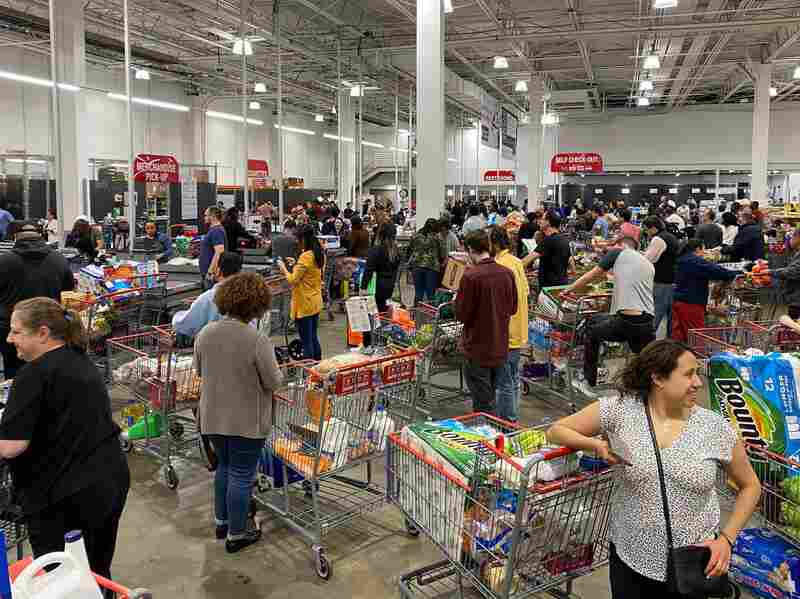 Shoppers line up with full carts in a supermarket in Virginia on March 13, 2020. Daniel Slim/AFP via Getty Images hide caption 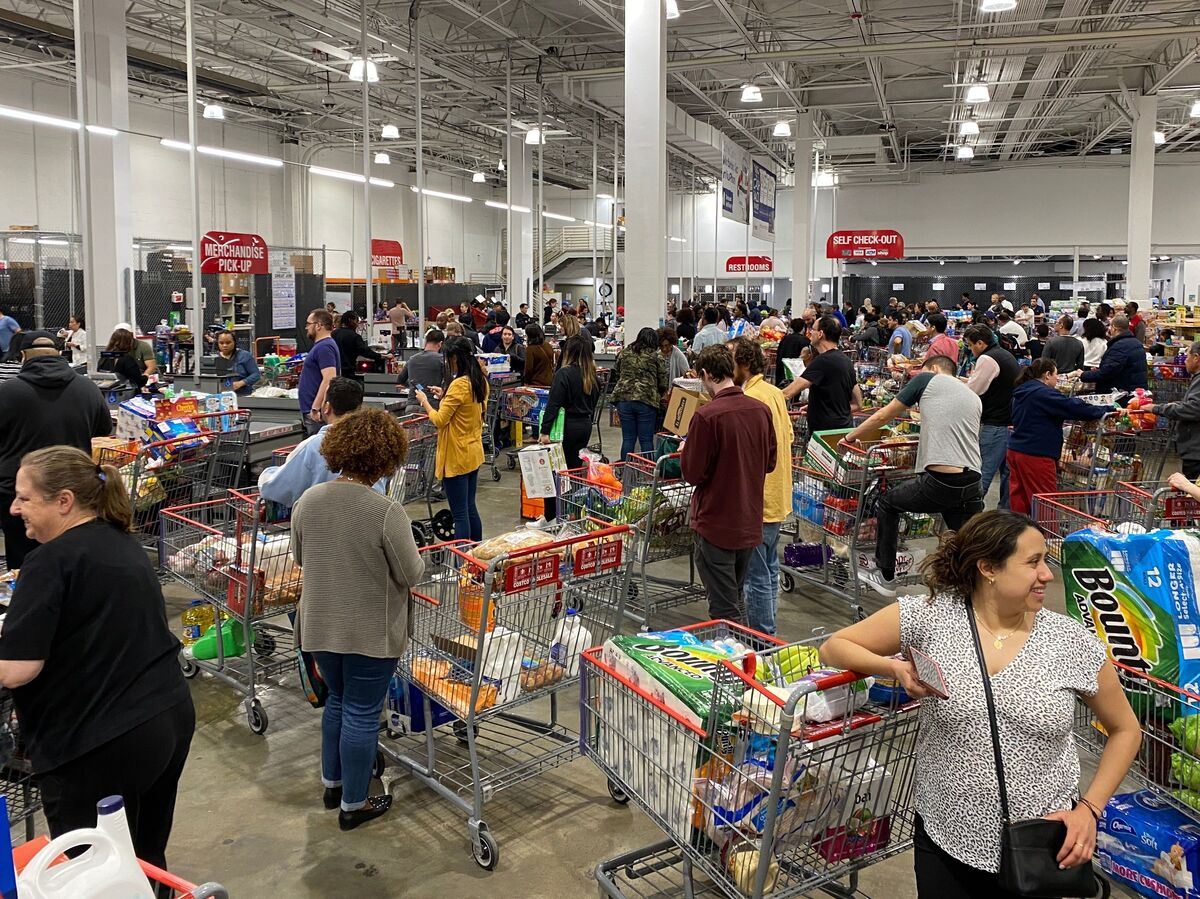 Shoppers line up with full carts in a supermarket in Virginia on March 13, 2020.

Markets rose as Trump spoke in the White House Rose Garden for more than an hour at the end of a week marked by school closures, sports event cancellations, directives to work from home, and cleared-out store shelves as people rush to stockpile basic goods.

"This will pass," Trump declared, "this will pass through and we're going to be even stronger for it."

Trump thanked Google for helping to develop a website, saying it would be "very quickly done, unlike websites of the past" — a veiled shot at the healthcare.gov insurance website started by the former Obama administration, which was marred by extensive problems when it launched. "We'll be announcing locations probably on Sunday night," he said. 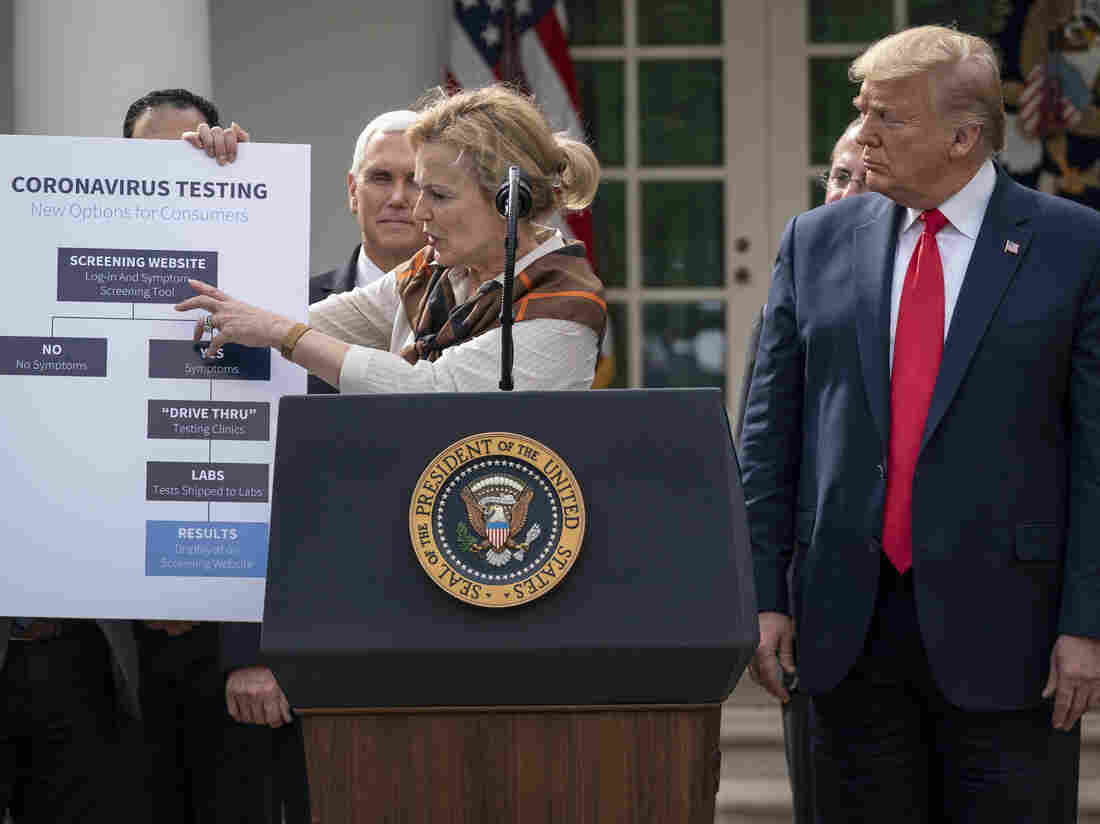 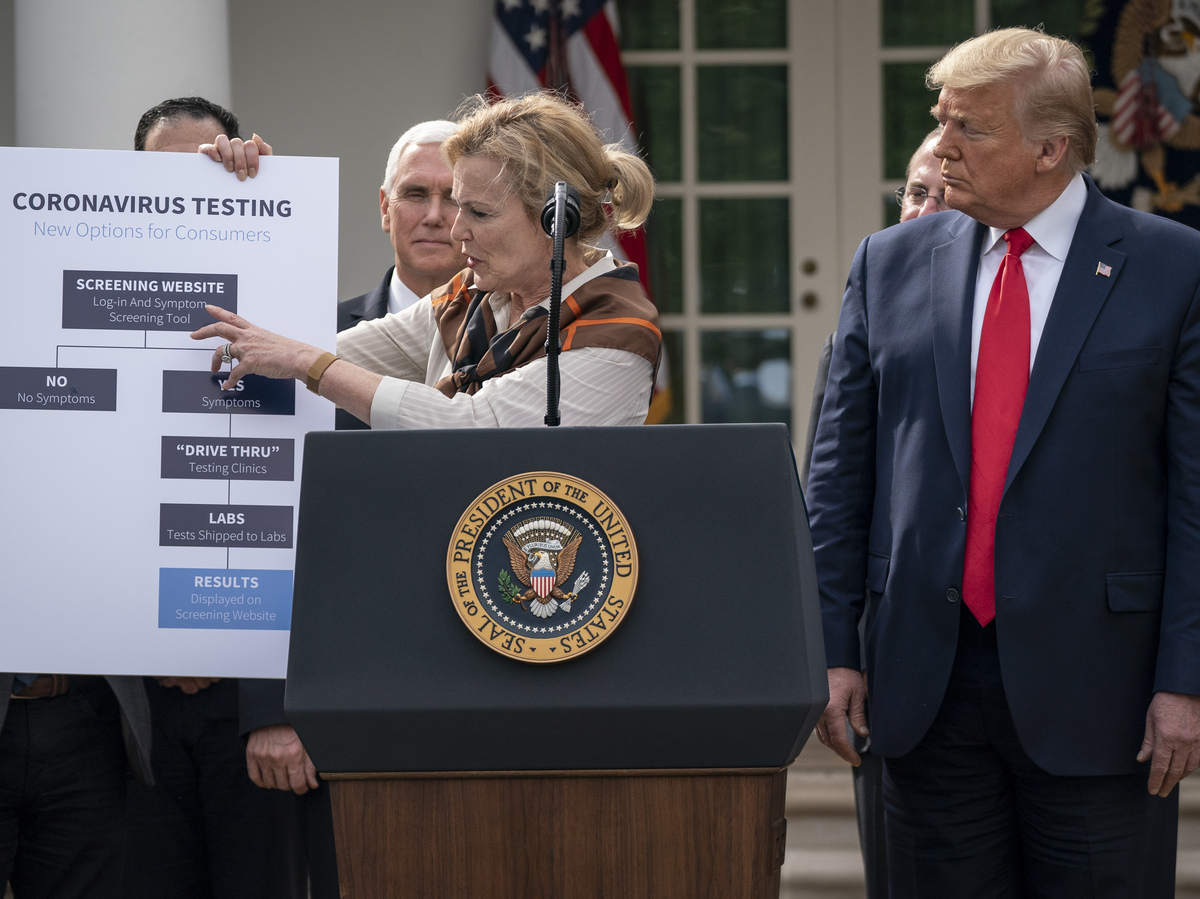 Deborah Birx, a scientist who is part of the White House task force on the pandemic, brandished a flow chart to announce "this new approach to testing" that she said was "facilitated by Google" to help screen patients and direct them to testing sites.

But after the announcement, Google said its life sciences division, called Verily, was only in the "early stages" of rolling a website in California's Bay Area.

Statement from Verily: "We are developing a tool to help triage individuals for Covid-19 testing. Verily is in the early stages of development, and planning to roll testing out in the Bay Area, with the hope of expanding more broadly over time.

Asked about the discrepancy, a White House official told NPR: "The Trump administration is working with Google to develop a website Americans can go to determine whether a test is needed and, if so, facilitate testing at a nearby location. We expect to have more details in the days ahead."

Trump rebuffed critics of his administration's response, saying he inherited a system that wasn't able to respond quickly enough. Asked whether he took responsibility for the lag in making tests available for the coronavirus. Trump responded, "I don't take responsibility at all."

Trump also said he was not responsible for dismantling a pandemic office inside the White House National Security Council, scolding a reporter for asking what he called "a nasty question."

The money freed up Friday by the president's declaration will be in addition to the $8.3 billion provided by an emergency spending bill Trump signed on March 6 — and is aside from a new relief package negotiated with House Democrats to cover the costs of testing, paid leave and other economic assistance for people affected by the disruption caused by the pandemic.

Trump his authority under the Stafford Act to make the nationwide emergency determination, and encouraged governors and tribal leaders to request a "major disaster" declaration as well, which would free up even more assistance. Stafford Act powers are more typically used during natural disasters like hurricanes, but were also used in during the outbreak of West Nile virus in 2000 to help the states of New York and New Jersey.

The Stafford Act declaration activates the Federal Emergency Management Agency, which can help with technical, financial and logistical relief. FEMA could, for instance, facilitate the distribution of coronavirus tests, medications and food or even bring in tents for hospitals treating an overload of patients if it gets to that point.

Trump also declared a national emergency under the National Emergencies Act. This, in conjunction with the public health emergency already declared in January, provides regulatory relief that can help the response. For instance, this allows agencies to waive licensing requirements so medical professionals can cross state lines to assist in areas of greatest need.

Using the authority, his administration issued a blanket ban on visitors to all nursing homes across the country to protect people most vulnerable to the virus, a step officials said would be painful for families, but was necessary.

Trump took other steps too. He said he would waive interest on federal student loans until further notice using executive action. And he said the government would take advantage of depressed crude oil prices and buy oil for the Strategic Petroleum Reserve. "We're going to fill it right to the top," Trump said.

Trump also raised the possibility of expanding a ban on travelers from most parts of Europe by adding the United Kingdom. The UK had been exempt from the action Trump announced Wednesday night, but has since seen more cases of the virus.

Trump plans to host a videoconference for leaders of G7 nations next week to discuss the pandemic, the White House said on Friday night.

Trump also said he will "most likely" get tested for coronavirus himself. Trump had posed for a picture last weekend at his Florida residence with a member of Brazilian President Jair Bolsonaro's delegation. That aide has since tested positive for the coronavirus.