Accessibility links
U.S. Coronavirus Testing Gets A Potential Breakthrough U.S. public health experts say they're "flying blind" because they need much more testing to know how widespread the outbreak is. But a just-approved test could be a game-changer. 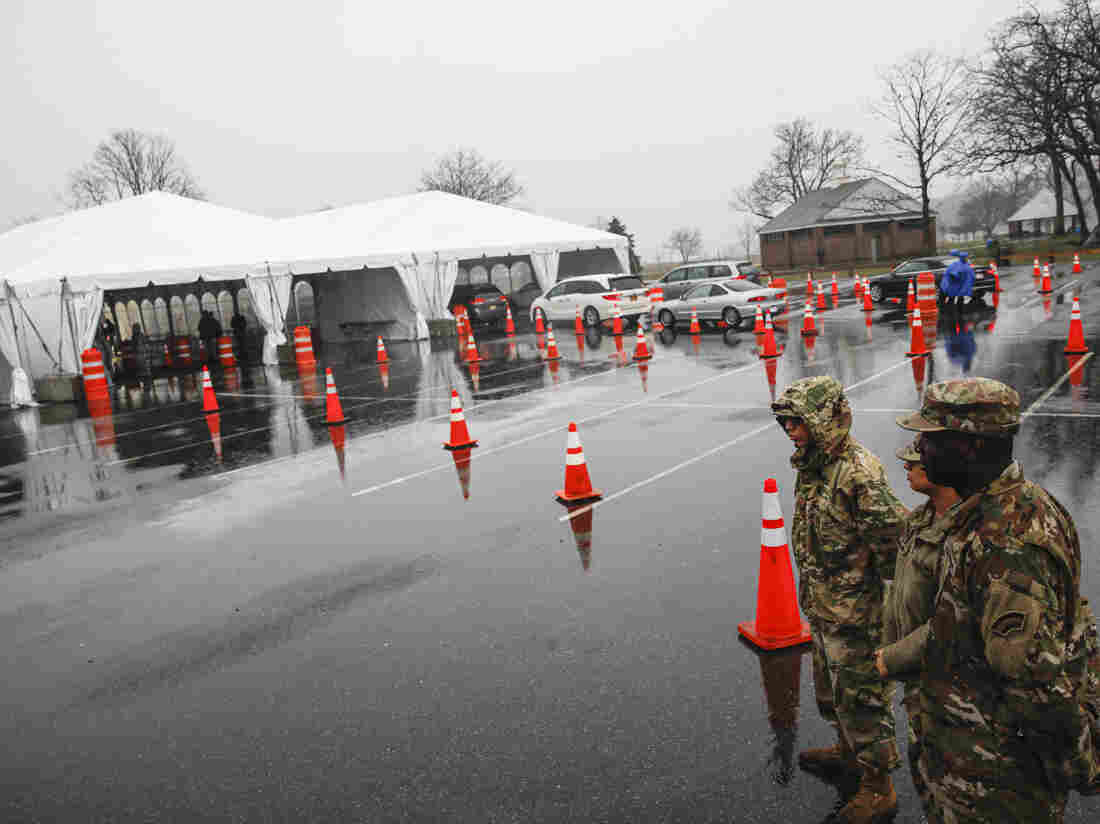 National Guard personnel stand beside a line of motorists waiting for coronavirus testing in New Rochelle, N.Y., on Friday. Major retailers such as CVS, Target and Walmart are pledging to set up drive- through test sites in some of their parking lots. John Minchillo/AP hide caption 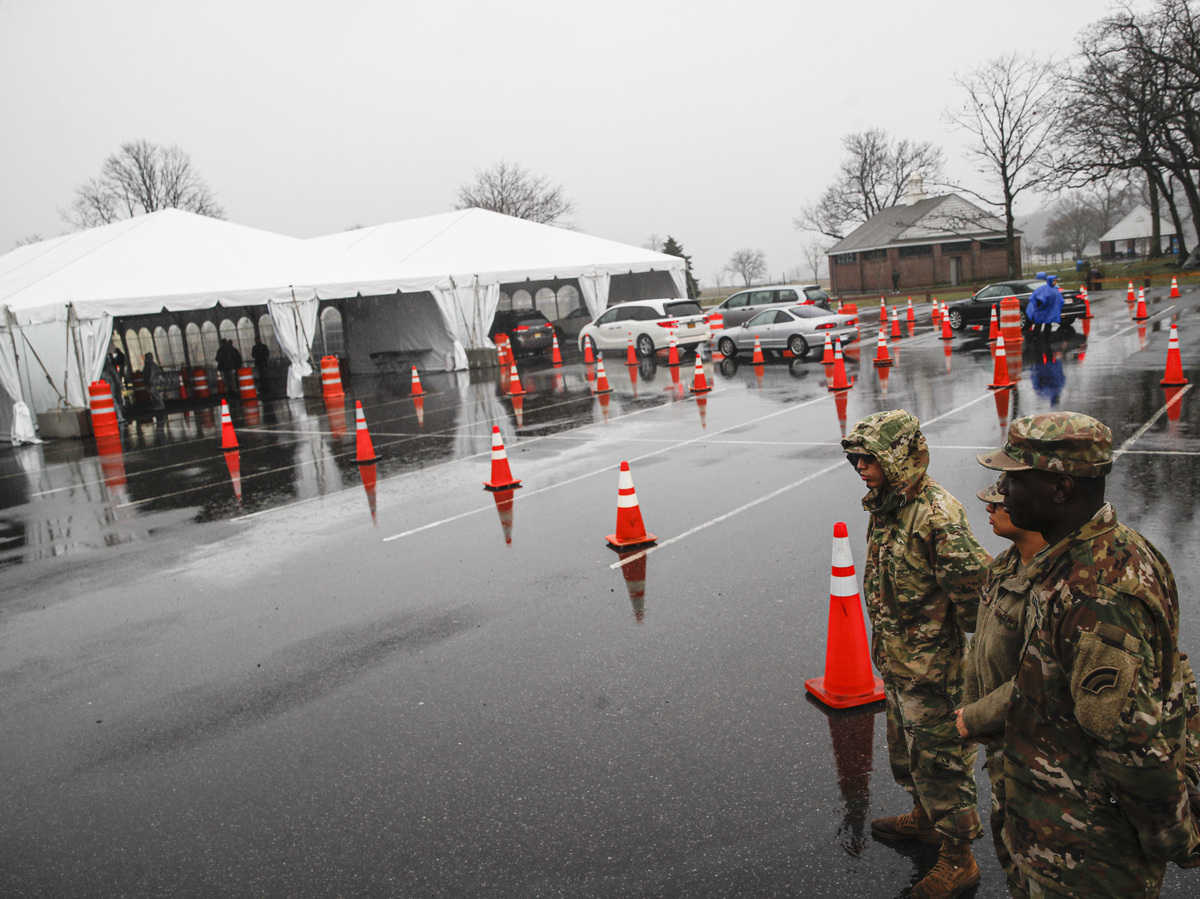 National Guard personnel stand beside a line of motorists waiting for coronavirus testing in New Rochelle, N.Y., on Friday. Major retailers such as CVS, Target and Walmart are pledging to set up drive- through test sites in some of their parking lots.

In what's looking more like a public health debacle, the U.S. has a serious testing problem with the coronavirus. Only around 15,000 people have been tested so far, according to the Centers for Disease Control and Prevention. And public health experts say that's not nearly enough to know how widespread the outbreak is and how to respond.

But the Food and Drug Administration has just approved a new test from the giant pharmaceutical company Roche that could represent a major breakthrough.

The initial test approved by the FDA is complex and requires specialized training and equipment. Until this week, some of the supplies required to do the test had to come from a single company in Germany that couldn't meet the demand.

"The big players that normally sell things like the [regular flu] test kits or rapid strep test kits to hospitals, they haven't had assays authorized yet by FDA," says Kelly Wroblewski, director of infectious disease programs at the Association of Public Health Laboratories.

So in other words, the biggest pharmaceutical companies in the U.S. and the world haven't been able to pitch in and help.

But that just changed in a very big way.

"We're very excited to share the news that overnight we got emergency use authorization from the FDA," says Paul Brown, a senior executive for Roche. He says the company has a new test that's more simple, and quicker to get results.

Roche has already begun production while it awaited FDA approval, he says.

"We have about 400,000 tests that are available for the U.S. market," Brown says. And he says Roche expects to manufacture about 1.5 million tests per month.

That's a lot more tests than have been administered so far.

And Brown says there are about 100 Roche machines already in use across the country, each capable of processing more than of 1,000 tests per day.

Michael Mina, an associate medical director of virology at Brigham and Women's hospital in Boston, says that if that kind of manufacturing pace can be kept up, "I think that will be one of the pieces that turns out to be sort of a game changer in the testing capacity in the United States."

Mina and other public health experts say that dramatically ramping up testing is crucial to saving lives.

Marc Lipsitch, who directs the Center for Communicable Disease Dynamics at Harvard's School of Public Health, says testing is needed at emergency rooms in every major metro area across the country. That would offer statistically significant sampling to get reliable estimates on how many Americans actually have the coronavirus, he says.

"I think we're flying almost completely blind right now," Lipsitch says. "We have a lot of uncertainty about whether we have 10 times more or 100 times more cases than we know about."

Other countries appear to have been doing a better job with testing. South Korea, by one recent count, had been testing 700 times as many people per capita as the U.S.

Mina says it's striking just how unprepared the U.S. has turned out to be to face an outbreak like this. He thinks much will be learned from it. But with so much at stake, he says, "I just wish that we had really begun to take this problem seriously as a country two months ago versus really focusing on it just within the last couple of weeks."

Roche says it will start shipping those first 400,000 test kits this weekend. More companies could soon follow suit with new FDA-approved tests of their own.

Meanwhile, at a White House Rose Garden news conference Friday, top executives at Target, Walmart, CVS and Walgreens pledged to make space in some of their parking lots for drive-through testing.

Even so, Mina thinks it could still be a few weeks before all this ramps up enough to allow for a much better estimate on just how many people have the virus in this country, and where all the hot spots are, so the infectious disease experts know how best to respond.