Accessibility links
Sports Leagues Shutter Their Seasons – And Leave Fans Wondering What To Do Now What had seemed unimaginable just days earlier is suddenly the new reality: Sports in America are on hold. 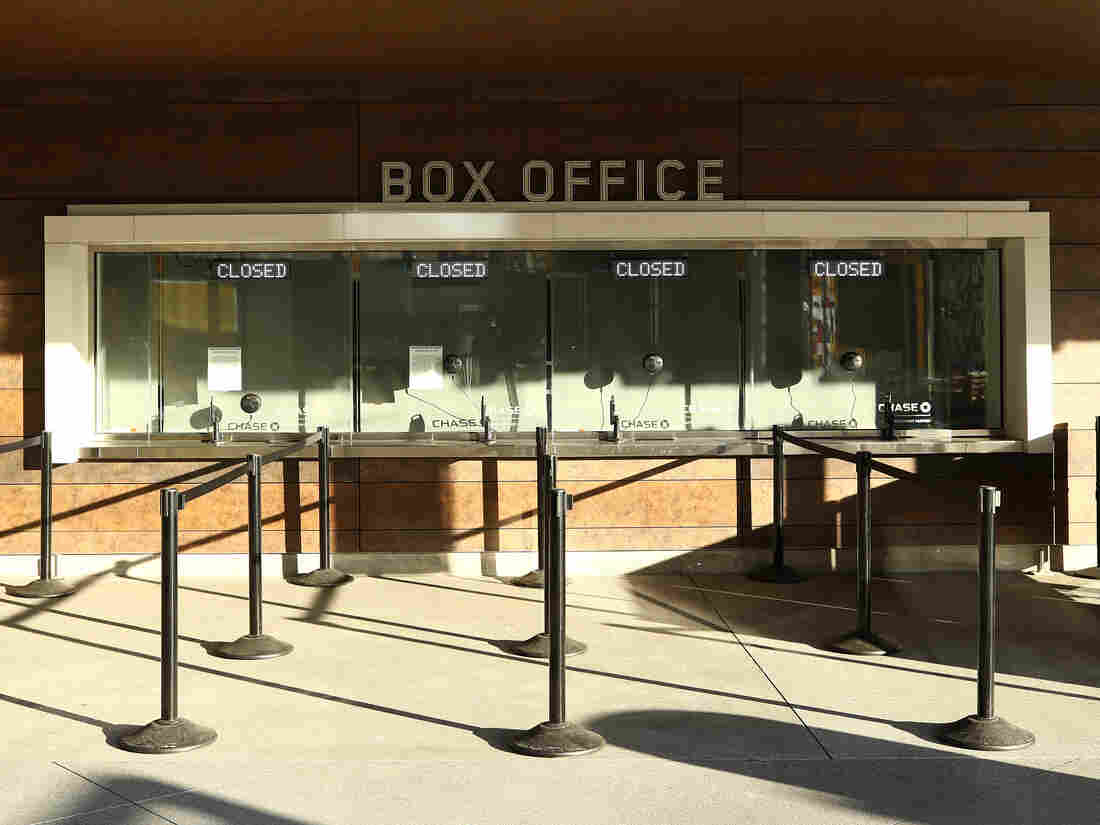 A box office is closed at the Chase Center in San Francisco, where the Golden State Warriors were to play the Brooklyn Nets on Thursday. The NBA season has been suspended due to the outbreak of coronavirus. Ezra Shaw/Getty Images hide caption 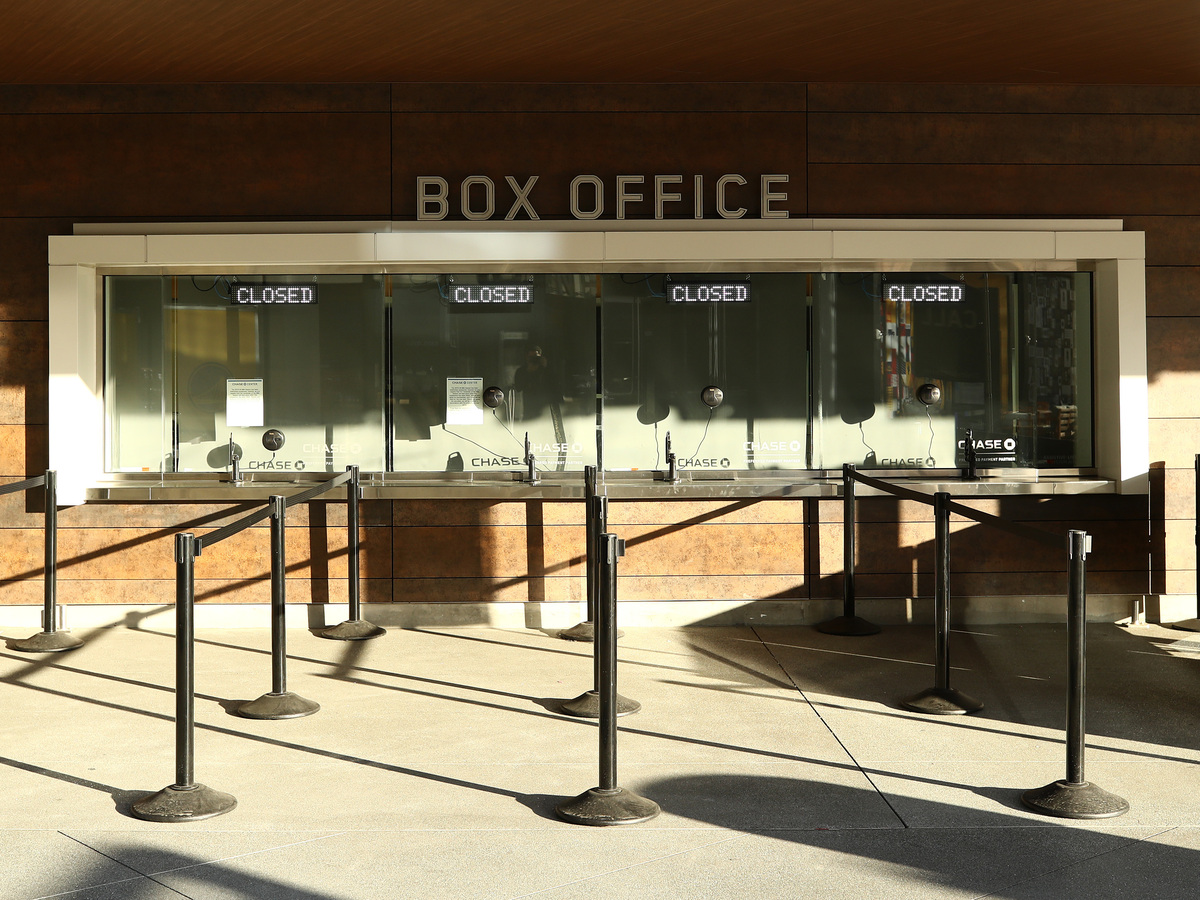 A box office is closed at the Chase Center in San Francisco, where the Golden State Warriors were to play the Brooklyn Nets on Thursday. The NBA season has been suspended due to the outbreak of coronavirus.

A spring without baseball? Saturdays without soccer? March without Madness? Such is the uncharted world of sports in the age of coronavirus.

What had seemed unimaginable just days earlier is suddenly the new reality: Sports in America have shuttered.

It started with the NBA. A Wednesday night game between the Utah Jazz and the Oklahoma City Thunder was called off moments before tip-off as word came in that Jazz player Rudy Gobert had tested positive for COVID-19. By the end of the night, the NBA had suspended its season for at least 30 days.

All day Thursday, the other pro leagues followed suit. The NHL suspended its season indefinitely. Major League Baseball halted spring training and pushed back opening day at least two weeks. The PGA Tour canceled its upcoming events, and NASCAR postponed its races this weekend and next.

Major League Soccer suspended its season for 30 days, and the English Premier League postponed its season after Arsenal manager Mikel Arteta tested positive for the virus.

And the biggest blow for many American fans: March Madness isn't happening. In fact, the NCAA canceled all its remaining sports championships this winter and spring. That includes championships in gymnastics, swimming and diving, track and field, wrestling, lacrosse, golf, hockey, tennis, baseball and softball.

A mix of factors played a role in the sudden cancellations.

Players getting sick offered proof that even the young and healthy can get coronavirus. Two players on the same team getting it showed how contagious COVID-19 is — especially in the close quarters of playing fields, locker rooms, buses and planes that are the domain of pro athletes. And as cities, states and countries moved to ban large gatherings of people, major sporting events would be forced to take place without any fans in attendance.

News that on other days would be big – like the resignation of U.S. Soccer President Carlos Cordeiro on Thursday night – ended up a mere footnote on a day when the stock markets plunged, schools closed, and the State Department was warning against international travel anywhere.

Even so, the sports cancellations felt to some like the moment that the severity of the coronavirus crisis hit home.

Basketball superstar LeBron James echoed what no doubt a lot of people were feeling when he tweeted on Thursday: "Man we cancelling sporting events, school, office work, etc etc. What we really need to cancel is 2020! Damn it's been a rough 3 months. God bless and stay safe."

The prospect of months of working from home suddenly seemed a lot sadder without weeks of college basketball games to look forward to. 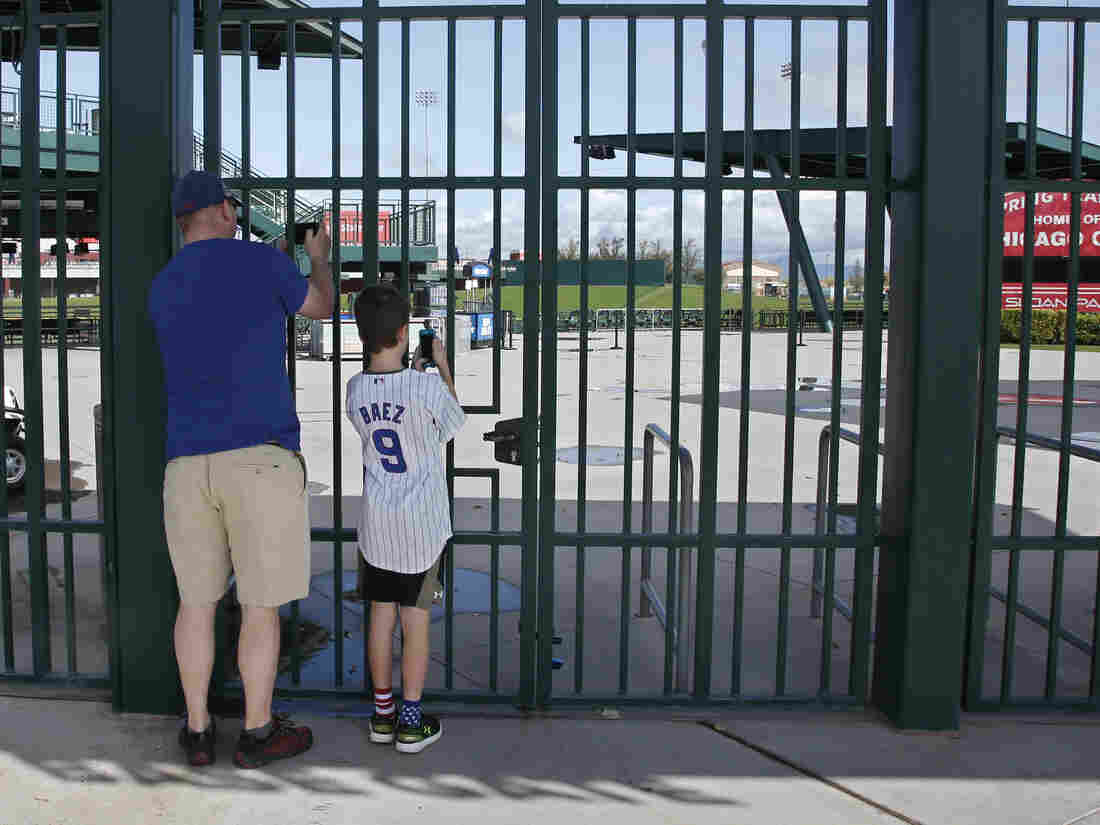 Fans take photos through the locked gates at the spring training site of the Chicago Cubs, in Mesa, Ariz., on Friday. Major League Baseball has suspended the rest of its spring training game schedule and delayed opening day by at least two weeks because of the coronavirus outbreak. Sue Ogrocki/AP hide caption 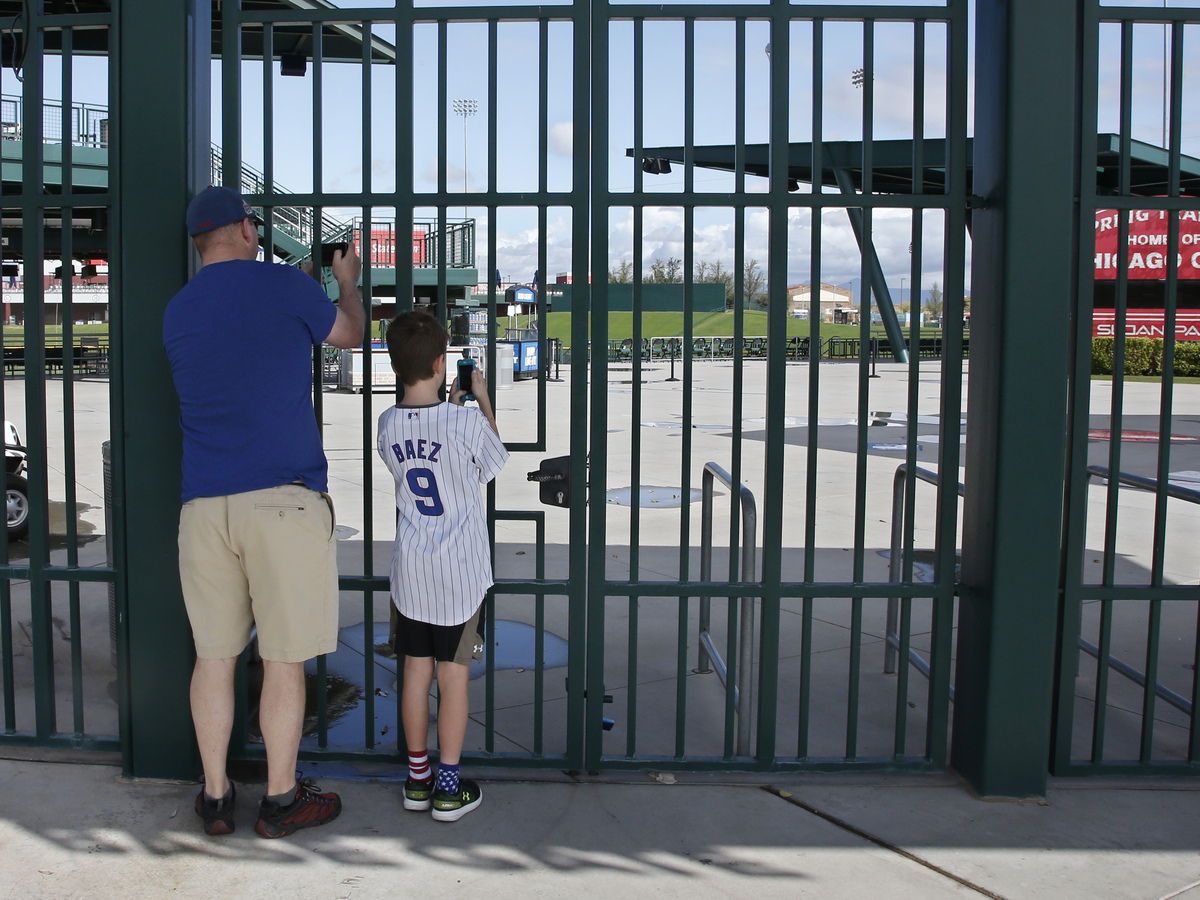 Fans take photos through the locked gates at the spring training site of the Chicago Cubs, in Mesa, Ariz., on Friday. Major League Baseball has suspended the rest of its spring training game schedule and delayed opening day by at least two weeks because of the coronavirus outbreak.

For instance: whither ESPN? The sports network posted its programming schedule for Friday, the first day in the low-sports era: SportsCenter and talk shows all day.

"We appreciate your patience as we work through modifications for the days ahead," Josh Krulewitz, ESPN VP of Communications said in a statement. "Our programming team is hard at work to fill the holes on our networks and we will provide updates when finalized."

How will the people who clean stadiums and sell hot dogs pay their bills now that games aren't happening? Some teams say they're working on this. The Cleveland Cavaliers say they're developing a compensation plan for their events staff and hourly workforce. Dallas Mavericks owner Mark Cuban says he'll continue to pay arena staff affected by the NBA suspension.

"I'll pay the hourly workers that would have worked the Mavs games we would have had through the rest of our home games, the rest of the season," Cuban told MSNBC on Thursday. "We'll do the same thing, potentially, for concerts if those are canceled or postponed. But the challenge is going to be for us really, as a nation, as a community in north Texas to really be supportive and practice some trickle-up economics. Go out and support local businesses, support the people who work hour to hour, because if they fail, if we let them down, then we collapse as an economy as a whole."

What about college athletes who will lose their chance to compete in an NCAA championship, and possibly a whole season? The NCAA said Friday it would grant "eligibility relief" to student athletes who compete in spring sports, with more details to come.

The 2020 Olympics in Tokyo are still slated to happen in late July and early August. But with qualifying competitions canceled, how will teams or athletes earn a slot? No answer to that one yet.

There's real loss involved in shutting down sports. The economic cost of disappearing tourists and tailgaters. The athletes who were en routes to records they might not break, athletes who were peaking in their careers right now.

And no small thing: A nation of sports fans have lost a beloved pastime and happy distraction, one that they certainly would have enjoyed in the sure-to-be-strange weeks and months ahead.

On Friday afternoon, President Trump declared a state of emergency in the United States. These are unprecedented times in which citizens are asked to do their part to keep from spreading the coronavirus and endangering vulnerable people.

Canceling sporting events is a necessary part of that, for the safety of the athletes and their fans. But many Americans sure will miss the games.