Accessibility links
Australia's Fire-Ravaged Forests Are Recovering. Ecologists Hope It Lasts After devastating fires, there are signs of regrowth across much of eastern Australia. But there's also concern that a changing climate may alter some of the country's unique landscapes forever. 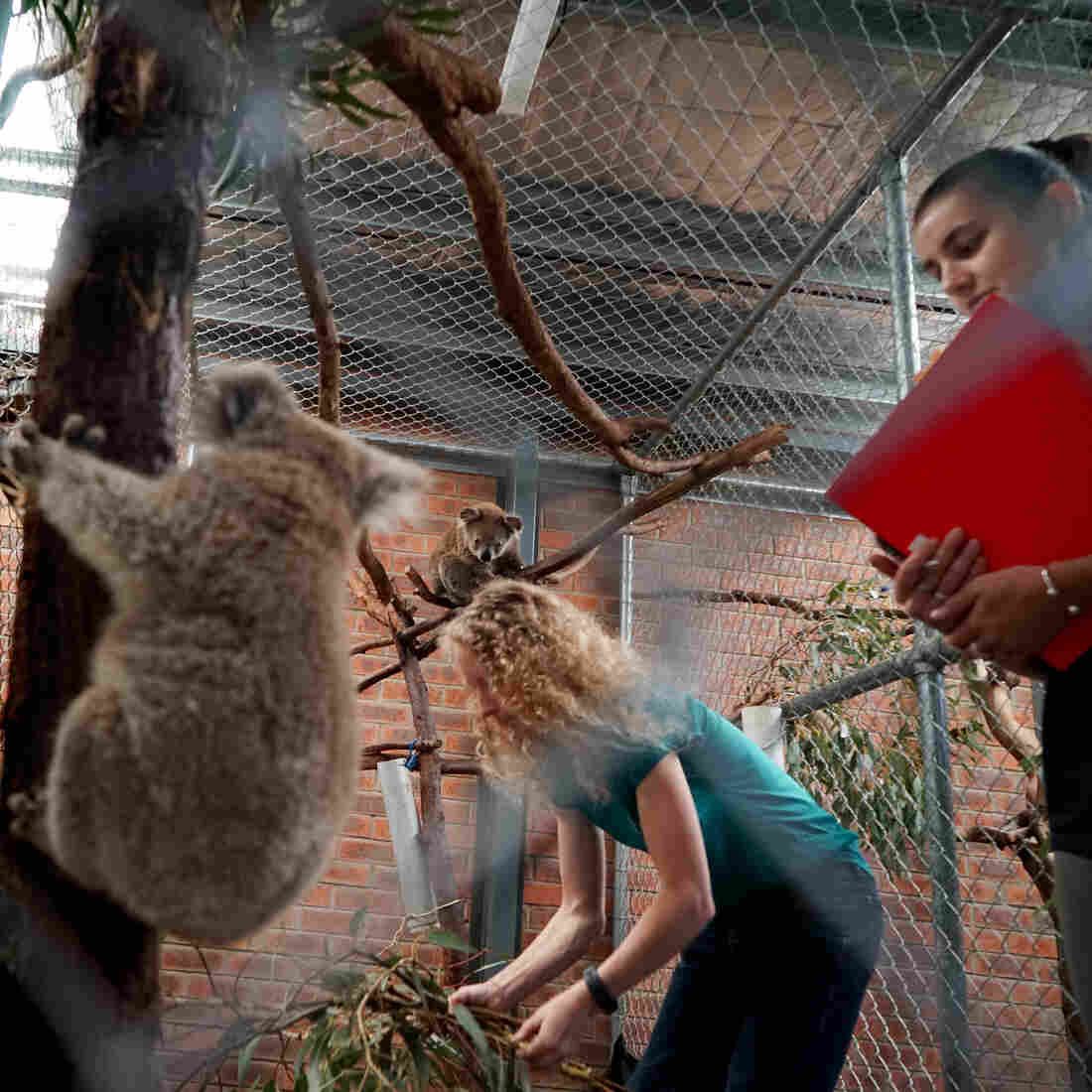 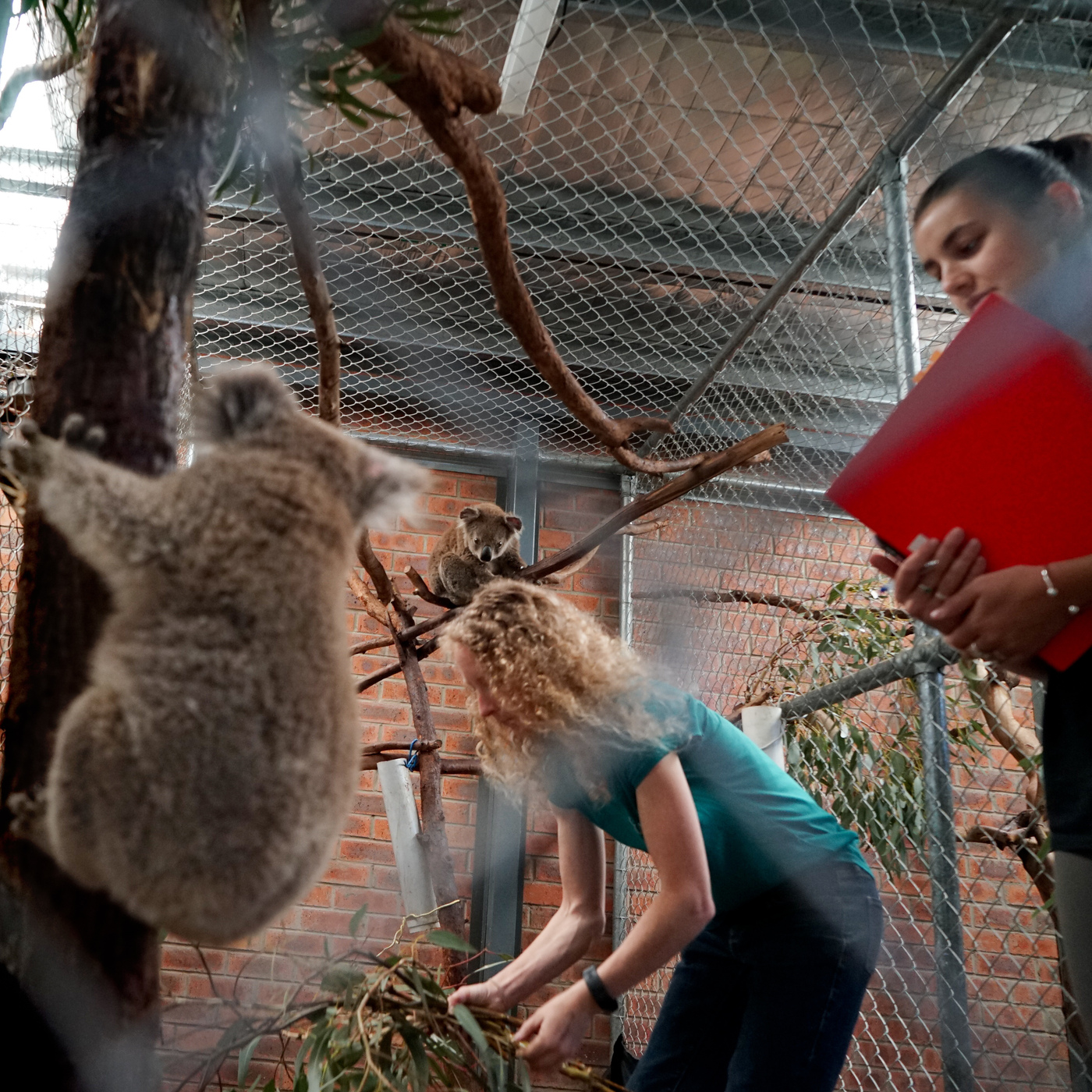 Karen Ford (left) and Lane Murraya stock rescued koalas with fresh eucalyptus branches. Ford has been collecting the branches on her property, which suffered fire damage.

In the back corner of a burned lot in Australia's fire-ravaged South Coast stands a torched tree. It's uppermost branches reach into a cloudless sky, brittle and bare. Against its charred trunk rests half-burned rubble, remains from the gift shop it used to shade.

But that's not where local resident Claire Polach is pointing. She gestures to the middle part of the tree, where lime green leaves sprout from blackened bark, as if the tree is wearing a shaggy sweater.

To Polach, the burst of regrowth is a sign that despite a months' long assault of flame and smoke, the second-hottest summer on record and a multi-year drought, Australia's nature "is doing it's thing." 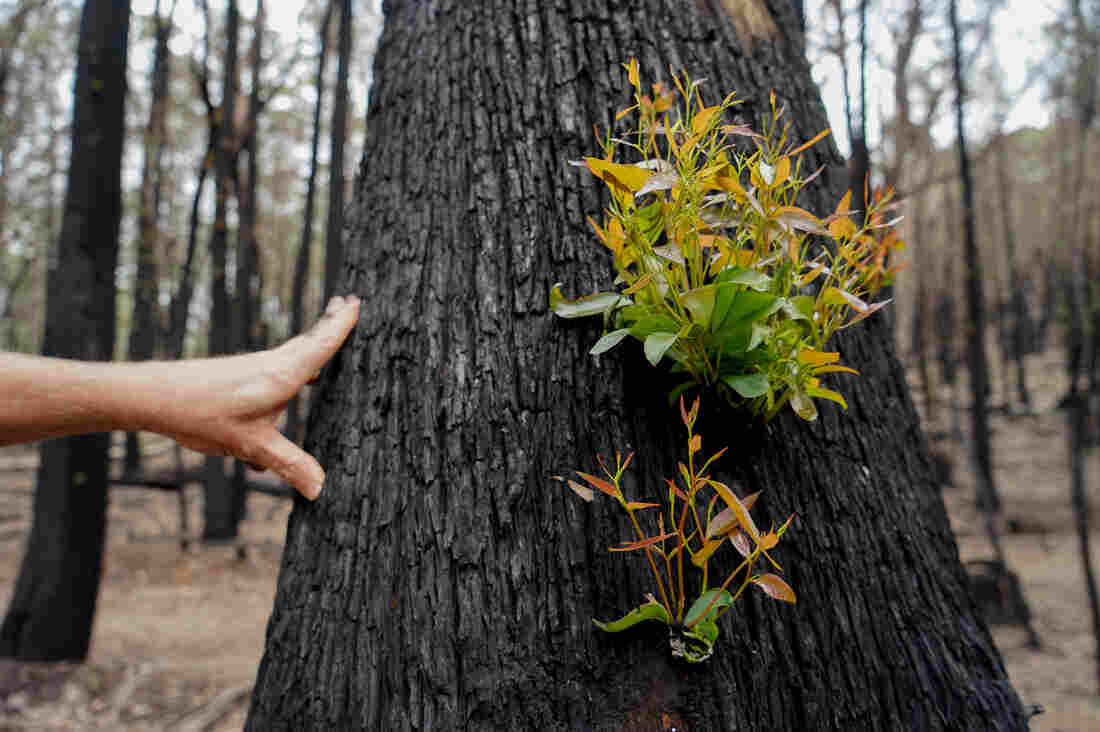 Fire damaged trees release epicormic sprouts along their trunks and branches that allow the tree to continue to photosynthesize and live. Nathan Rott/NPR hide caption

This cycle of fire, rain and recovery has played out in Australia for millennia. The majority of the country's forests are uniquely adapted to fire. Some species need it. "Australia is, more than any other, a fire continent," writes ecologist and historian Stephen Pyne in his book "World Fire."

But scientists have long warned that a warming climate could mean more severe fires, more often. Now there are concerns that even a fire continent will struggle to recover from the scale and severity of recent events.

New research published in the journal Nature Climate Change found that a staggering 21 percent of Australia's forested area burned in the 2019-2020 fire season, a figure the authors say is "globally unprecedented" and may indicate "the more flammable future projected to eventuate under climate change has arrived earlier than anticipated."

The question now is whether Australia's nature can keep pace. 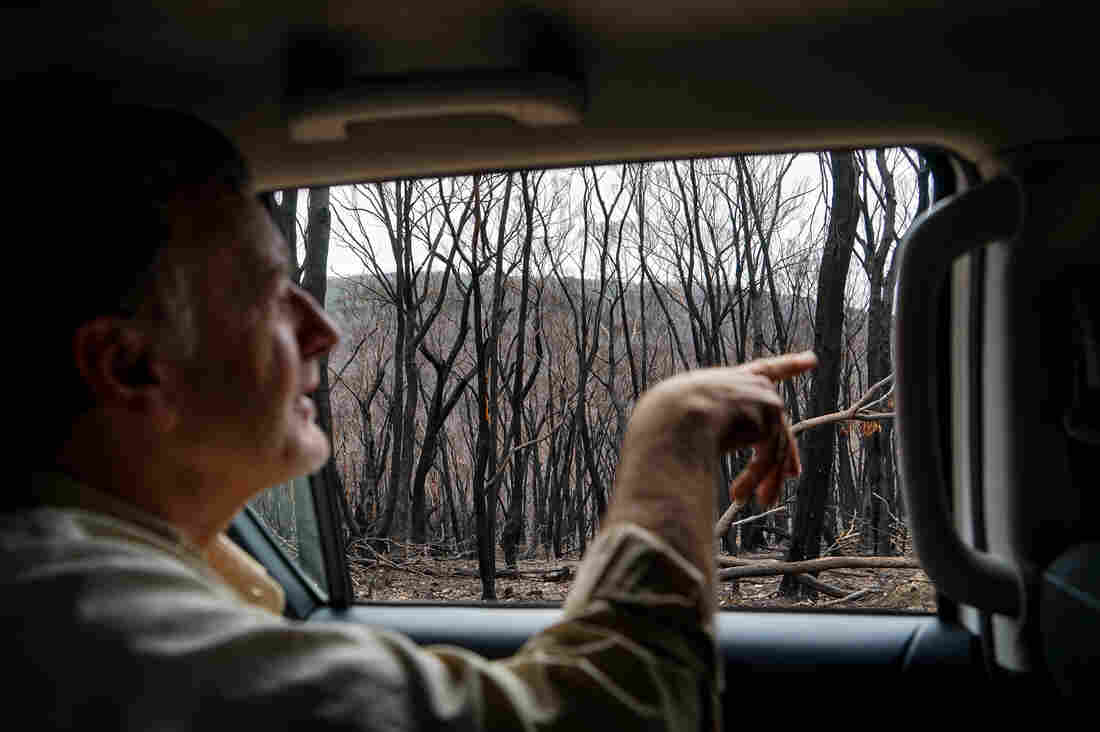 Plant ecologist Michael Doherty looks at a severely burnt part of forest in southeast Australia's Tallaganda National Park. He believes the forest should be able to recover from the devastating fires. Nathan Rott/NPR hide caption

His eyes on a narrow dirt road in front of him, Colin Brown gestures his head at the walls of burned trees passing on either side of his rumbling fire tanker.

"Good way to assess how bad the fire was is the scorch marks on the trees," he says. Two trucks ahead of him is a team of ecologists from the Australian National University, here in Tallaganda National Park to survey the damage caused by a recent fire.

Brown, a deputy captain with the Rural Fire Service in New South Wales, already has a pretty good idea of it. He, like tens of thousands of other volunteer firefighters, has spent the last few months chasing flames across eastern Australia's eucalypt-covered mountains, doing what he could to protect homes, ranches and other people tucked between.

"It's always difficult in Australia because the whole climate is drought and fire," Brown says, as the torch marks climb higher in the surrounding trees. "But what we're seeing is more intense drought and more intense fires." 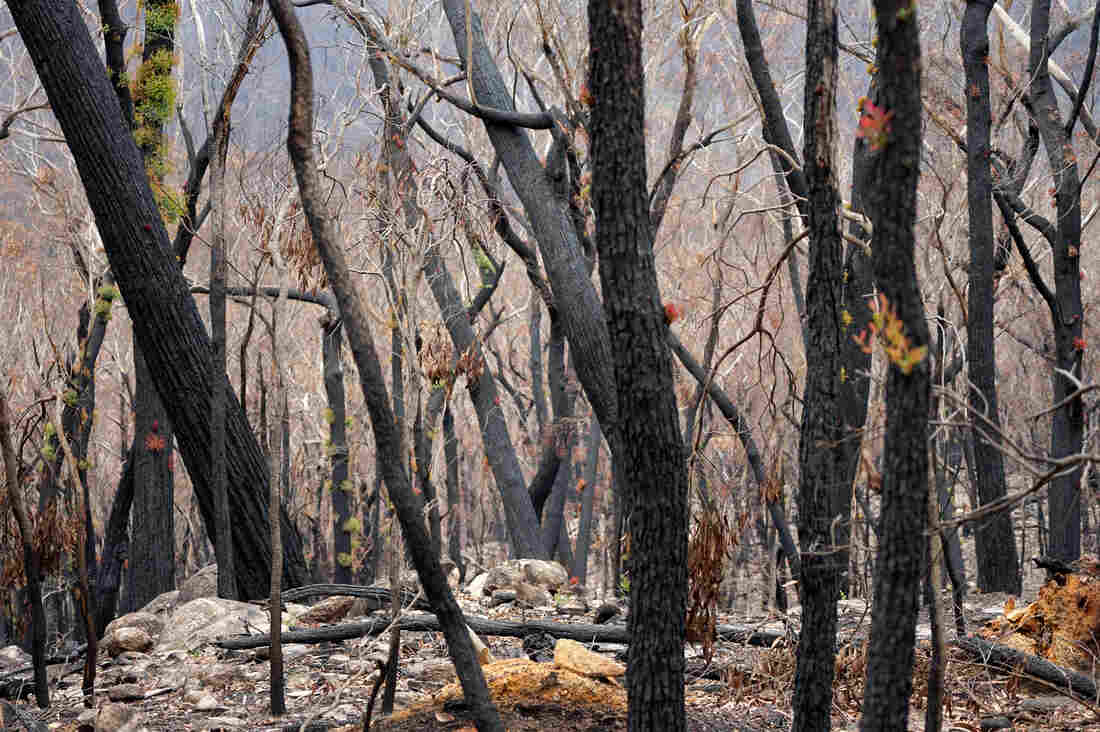 More than one-fifth of Australia's eucalypt forests burnt during the recent fire season. The scale of the disaster is concerning to ecologists, because it's unprecedented. Nathan Rott/NPR hide caption

A recent study by a group of international scientists confirmed what Brown and many others suspected: human-caused climate change contributed to the conditions they saw over the last few months, making them 30 percent more likely. "The weather's just different," Brown says.

Outside, the scorch marks now reach the tops of the trees. The ground below is littered with fallen logs and dead leaves. Brown stops the engine and puts on a helmet, a caution against any weakened trees that have yet to fall.

The team of ecologists spreads out in the forest. Some gather around a firefighter who's showing videos of the blaze on his cellphone.

Michael Doherty, a plant ecologist, walks to the base of a charred tree about 50 yards off the road. It's a young brown barrel, he says, "a eucalypt and it's showing a flash of epicormic growth after the fires." 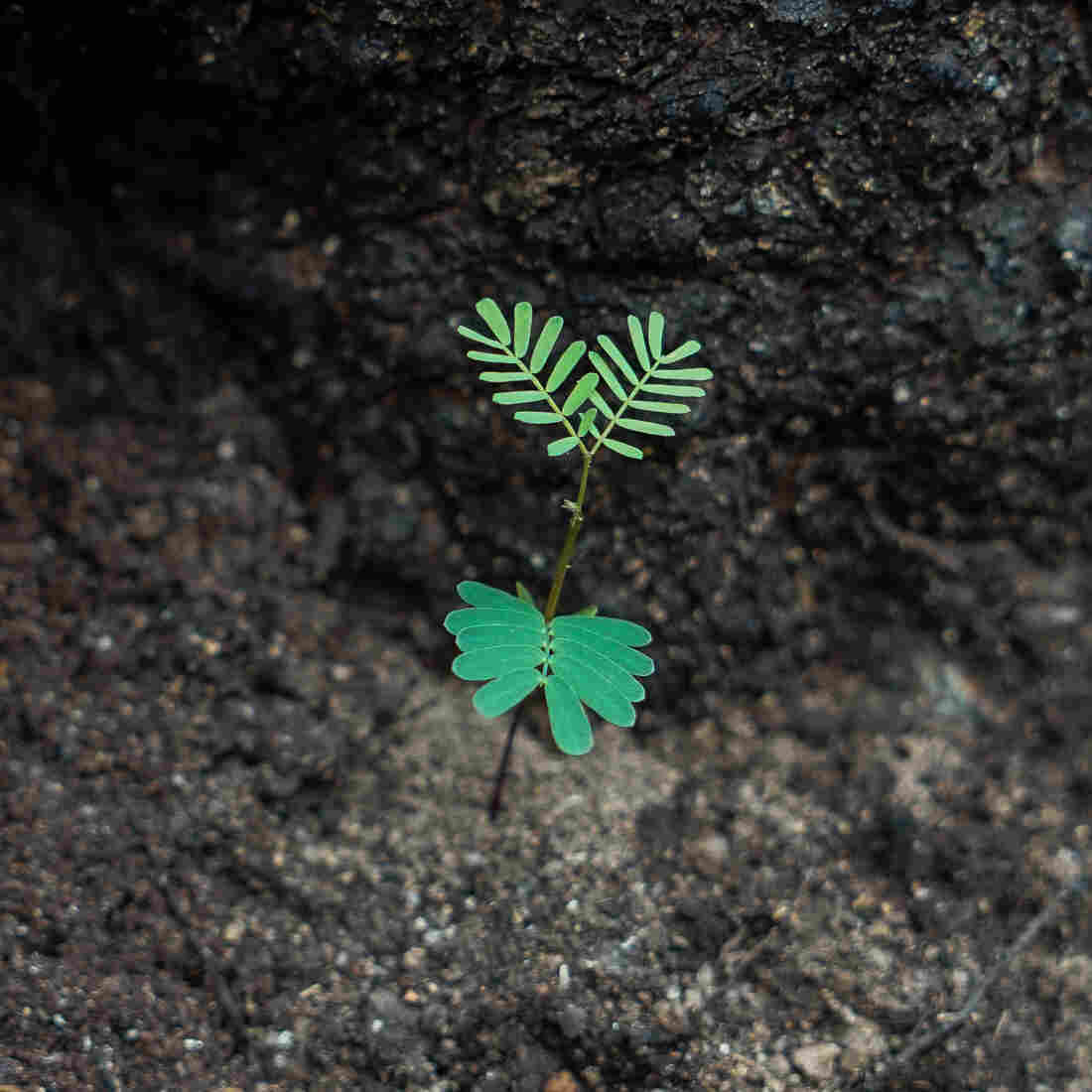 Sprouting and budding plants can be seen all across fire-ravaged eastern Australia. Some species need fire to germinate. Nathan Rott/NPR hide caption

His fingers run through that epicormic growth — a cluster of olive green leaves that's sprouting from the tree's trunk at about chest height. It's a response to damage from the fire, Doherty says, and proof that the tree isn't actually dead.

It's canopy has been scorched, killing its leaves, but dormant buds were waiting beneath its bark. These epicormic shoots allow the tree to continue gathering sunlight and photosynthesize, keeping it alive while the canopy recovers.

The burst of regrowth isn't surprising to Doherty, whose research focuses on forests' ability to recover after bushfire. But he says he is encouraged.

"Notwithstanding climate change, we're still seeing the ecosystems recover as we might expect they would," he says.

Whether they'll continue to recover, he says, is more uncertain.

A chief concern for ecologists is that as the climate warms and fire conditions become more common, the time between wildfire events will shorten. This is problematic for species that have evolved to cope with fire on an irregular basis.

"If we get more and more frequent fires, this vegetation might not have the break it needs to [fully] recover," says Marta Yebra, a research fellow from ANU who studies fire severity.

Compounding the problem, as climate change brings hotter temperatures and more erratic precipitation, recovery for some species might take longer than normal. That could give less dominant species an upper-hand. 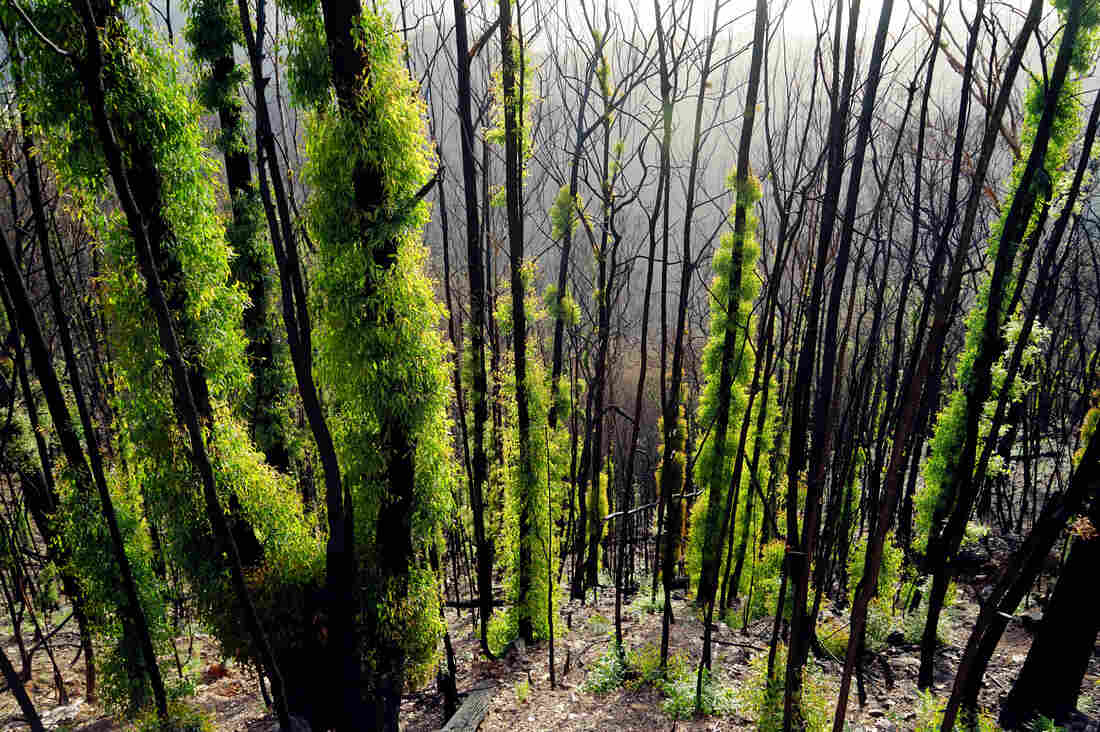 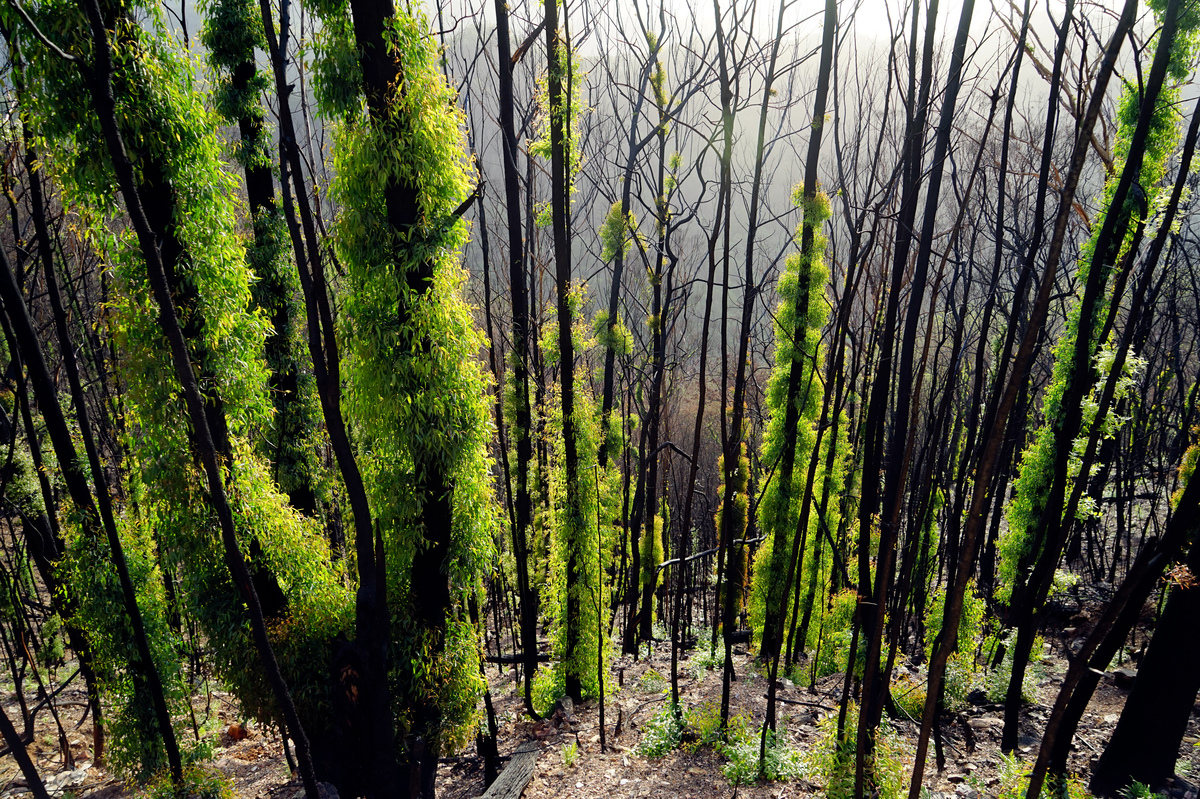 Scientists have already documented this happening in the Western U.S.

Research in Australia has found that shrub growth after severe fires can promote further fire, creating the potential for a runaway effect.

"Far from seeing ecosystem collapse, I think we could see ecosystem change," Doherty says. "And that change may or may not be desirable from a human point of view."

One of those species is an Australian icon: the koala.

A recent report by the International Fund for Animal Welfare, a global conservation group, estimated that at least 4,000 koalas — and as many as 5,000 — were killed in New South Wales in the recent fires. The report considers longer-term impacts like the loss of habitat and food. 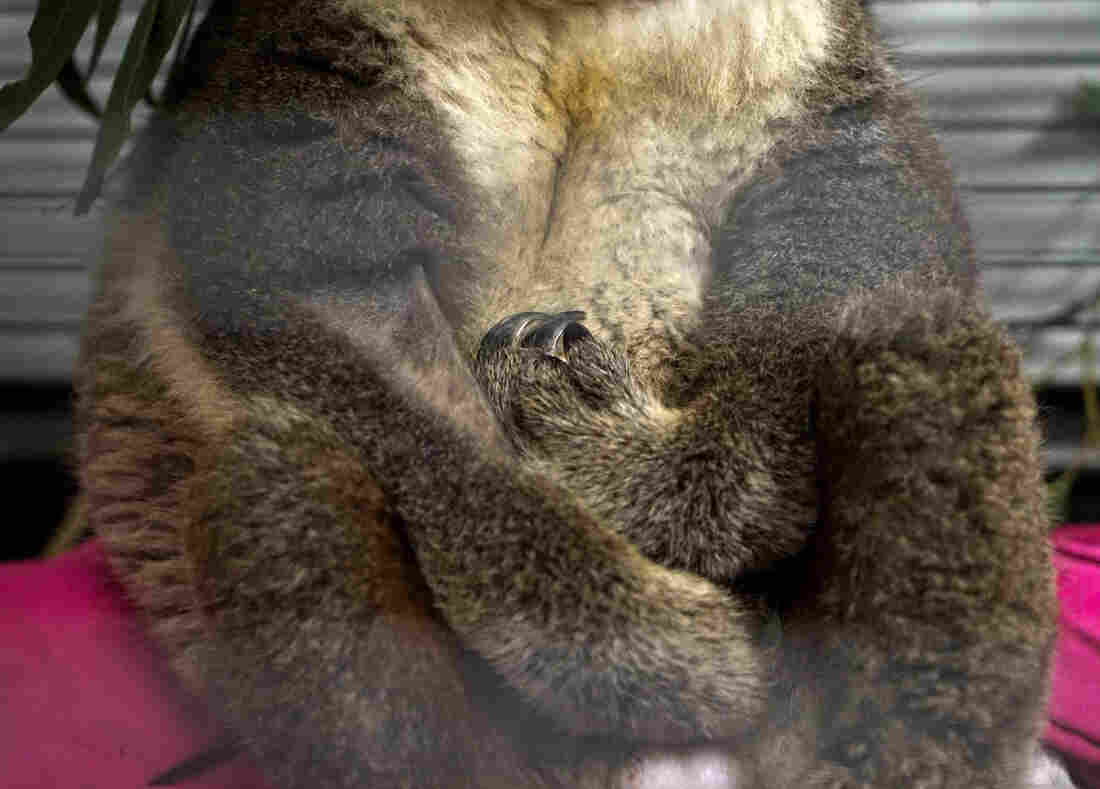 Paul, a male koala, was rescued with burnt paws. Biologists removed the bandages a few days before, but the koala still won't climb on the branches in his cage because of his tender paws. Nathan Rott/NPR hide caption

At a makeshift rescue facility at the Australian National University, biologists from the university are taking care of koalas that were rescued from the fires - some before the flames reached them, others after.

Those that have been brought in after the fires "are just skin and bone," says Dr. Kara Youngentob, whose helping care for the rescued koalas.

In one cage, a male koala sits on the ground cradling his hands in his lap. The koala has been named Paul, after one of the American firefighters who died while assisting in the past season's fires. The skin on its hands is still pink. Bandages were removed just a few days before.

The goal is to rehabilitate Paul and the other koalas at this facility until they're ready to be reintroduced into the surrounding bush, a task made more difficult by the scale of the fires. 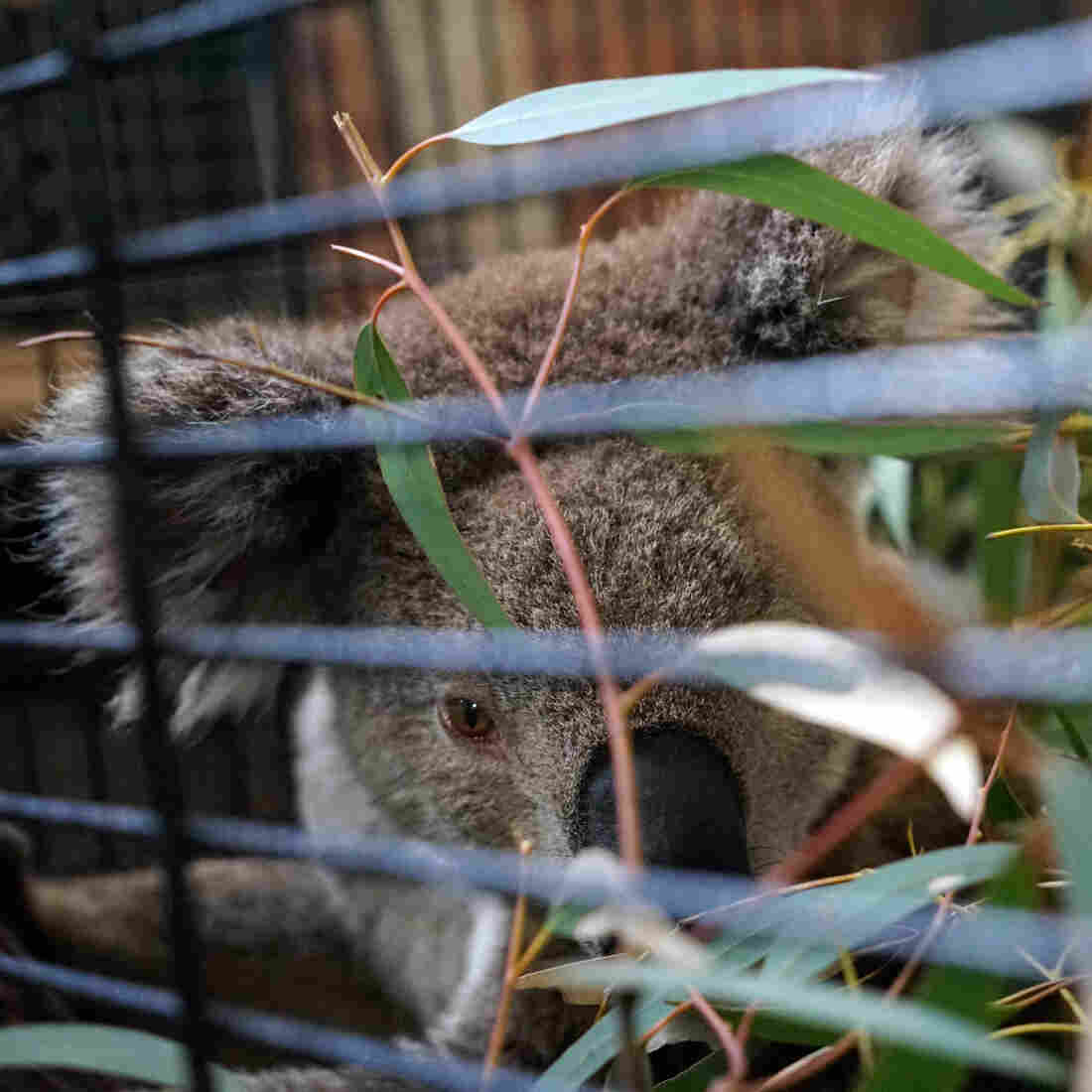 Rescued koalas are being held in captivity until they're in good health and can be released back in the wild. Many of the koalas that were brought in were starving and malnourished. Nathan Rott/NPR hide caption

Already, koalas and many of Australia's other endemic species have dealt with a multitude of human threats: vehicles, habitat loss, invasive species and disease. The Australian government recently released a report identifying 113 animal species that are in need of "urgent help."

Ecologists have known for a long time that a warming climate would mean significant changes for ecosystems and people, Youngentob says. "The question was just a matter of what the scale was going to be."

She pauses, as a baby koala clings to an adopted parent in a nearby cage.

"I think we're seeing what that scale can be," she says. "And much faster than we thought we would."