Accessibility links
'The Paper Kingdom' Reveals The Magic Of Take Your Child To Work Night As a kid, Helena Ku Rhee used to tag along with her parents as they cleaned law offices overnight. She's now a lawyer herself, and has written The Paper Kingdom, about a boy and his janitor parents. 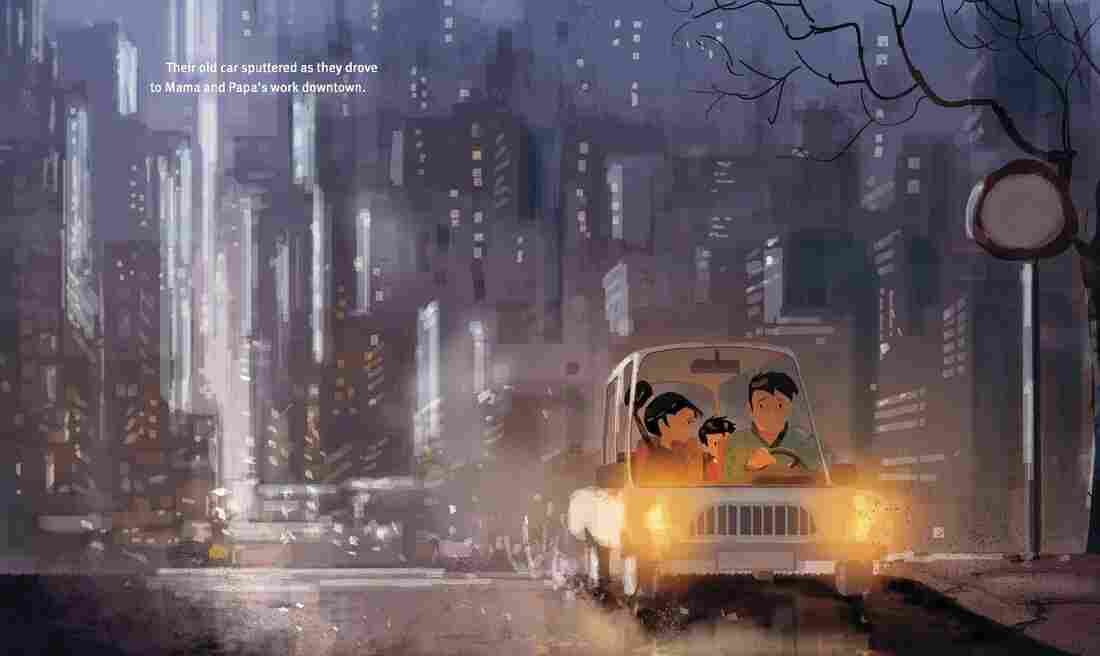 When Daniel tags along with his parents to work — they are janitors in a big office building — he's surprised to find a fantasy world full of kings, queens, a throne room and dragons.

Author Helena Ku Rhee drew on her own childhood as she wrote The Paper Kingdom. Her parents were night janitors for a law office in Los Angeles. They couldn't afford a babysitter, so they brought her along.

"On those very long, late nights, my parents actually turned a very unpleasant situation into something magical," she tells NPR's Renée Montagne. "They would tell me funny stories about the people who occupied the offices by day. They zoomed me around in empty wastebaskets like they were race cars. I wanted to write a book about that magic and wonder they instilled in me."

All these years later, nights are still special to Rhee: Decades after her parents took her along to clean law offices, Rhee became a corporate lawyer — and now nighttime is when she can write. 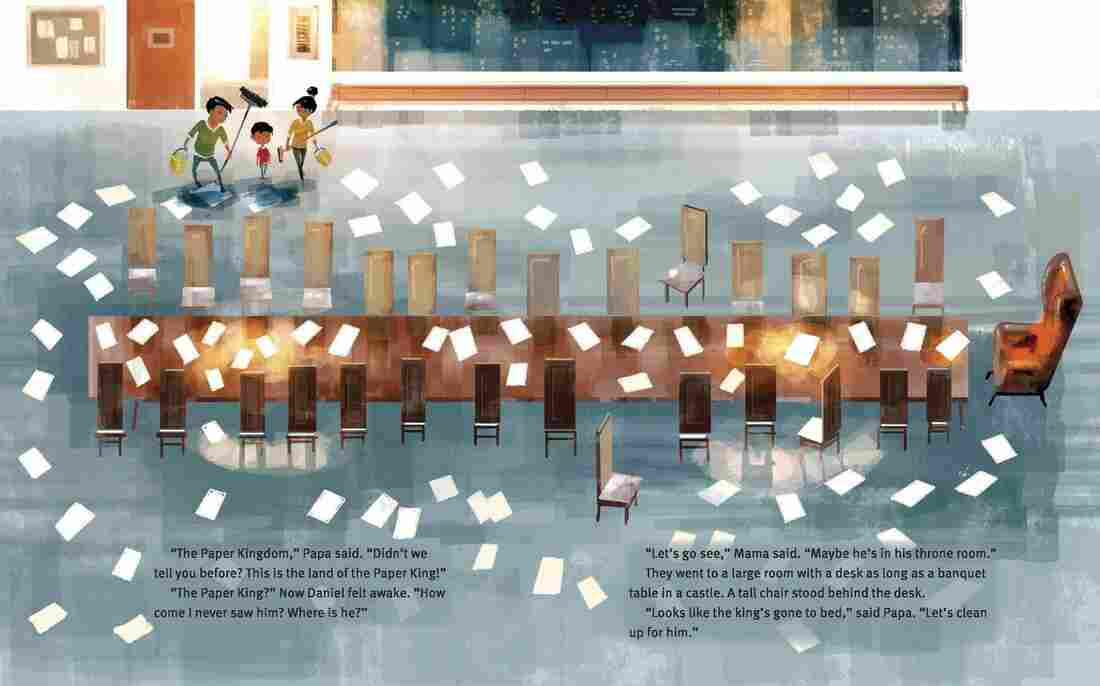 "The Paper Kingdom," Papa said. "Didn't we tell you before? This is the land of the Paper King!" Pascal Campion/Random House Books for Young Readers hide caption 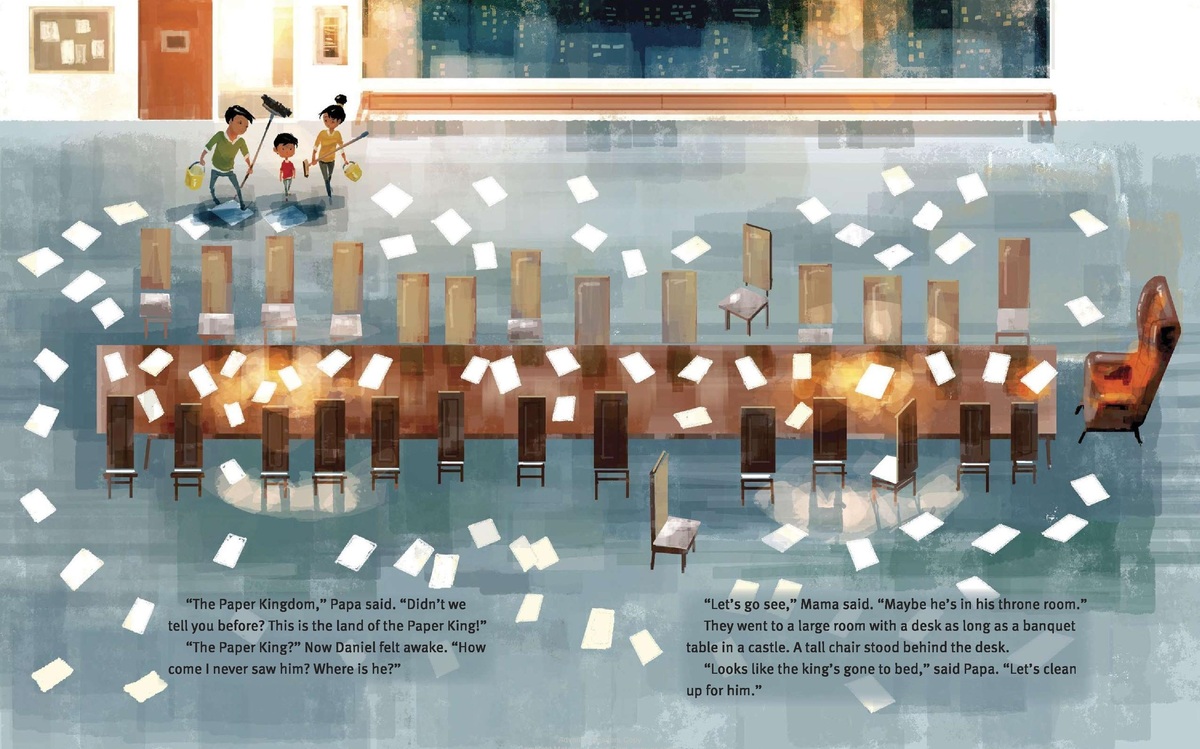 "The Paper Kingdom," Papa said. "Didn't we tell you before? This is the land of the Paper King!"

"I was driving at night on Wilshire Boulevard in L.A. when I got the idea for the story," she says. "So obviously, being out at night, I am aware of the people who are still working, the people who are occupying the spaces that everyone else has already emptied."

Illustrator Pascal Campion finds magic in the nights as well. He remembers when he was in college he'd go out for midnight walks around the city. "Night is a wonderful time for me," he says. Campion would see the lights on at the local radio station and would imagine someday having a job that allowed him to work after dark. 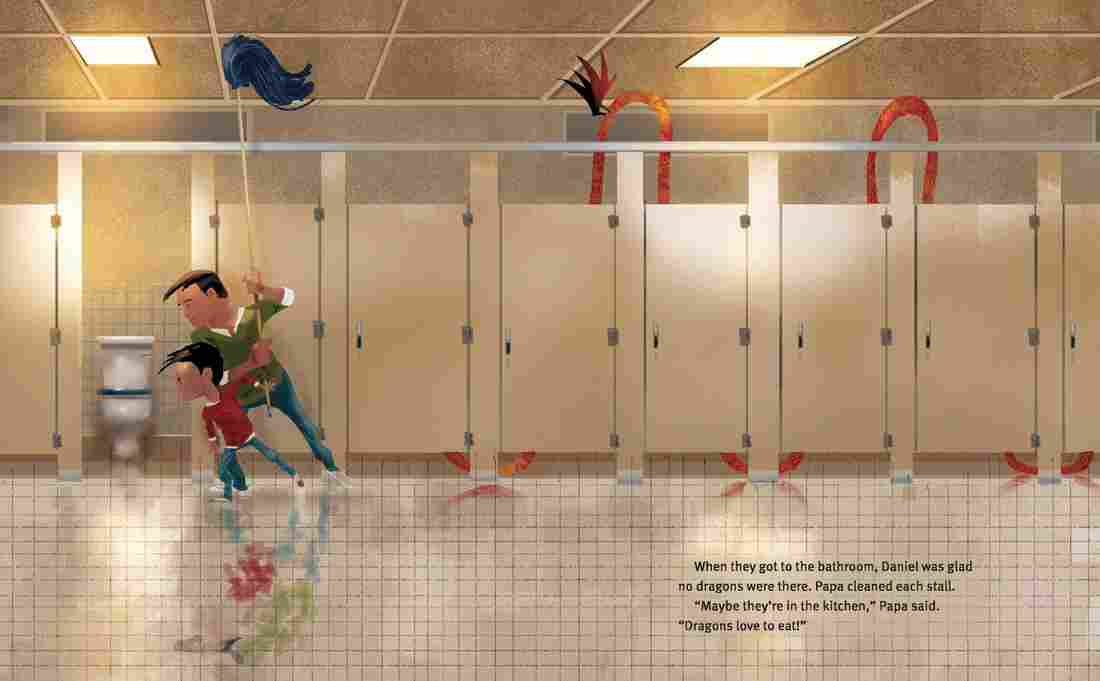 When they got to the bathroom, Daniel was glad there were no dragons there. Papa cleaned each stall. Pascal Campion/Random House Books for Young Readers hide caption

Rhee had been following Campion on Instagram, and had the sense that he was the right illustrator for her story. "I just felt like, OK, this artist can truly capture visually what I was going for," she says. "I definitely wanted to convey that sense of — it's almost like a secret world."

Campion drew the whole story in pencil first. "There was something more spontaneous ... a more direct link to my emotions, which I thought was what I needed to put in there," he explains. He used the pencil drawings as a template and then reproduced and edited the illustrations digitally. 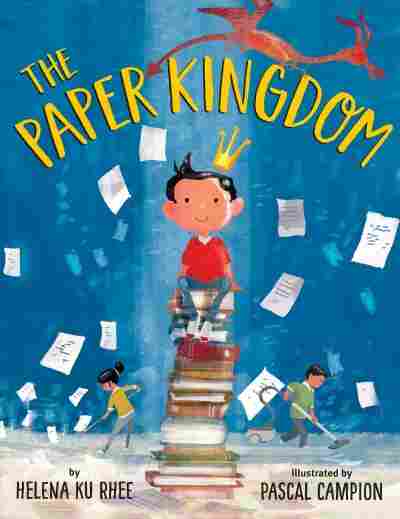 Campion liked that it wasn't "a loud story," but rather "a little moment story."

It's those moments with her parents that Rhee hoped to bring to life in The Paper Kingdom. "When you're that little and you see your parents working that hard ... you can't forget it," she says.

Rhee's father went on to become a machinist, making parts for planes and cars. Her mother became a seamstress. And now, after a lifetime of very hard work, they're finally retired.

Rhee still remembers the moment she told her parents that The Paper Kingdom was going to get published.

"We were sitting in a restaurant and it was the first time I saw my dad weep. It was a really emotional moment," she recalls. "I know that they thought they weren't doing enough for me. I know they felt bad that they had to take me to work with them late at night. But look what came of it: It's a beautiful piece of art that came of that hard time."

Rhee says she hopes to send a message to her parents and to all hardworking parents: "You feel like you're not doing enough for your children — but don't worry ..." she says. "They will survive and they'll take elements of beauty from even hardship."