Accessibility links
Coronavirus Hit This Long-Term Care Facility Hard, But Moving Residents Isn't Easy Family members of residents at Life Care Center outside Seattle where as many as 25 people have died, are anxiously watching their loved ones, infected with coronavirus, linger at the facility. 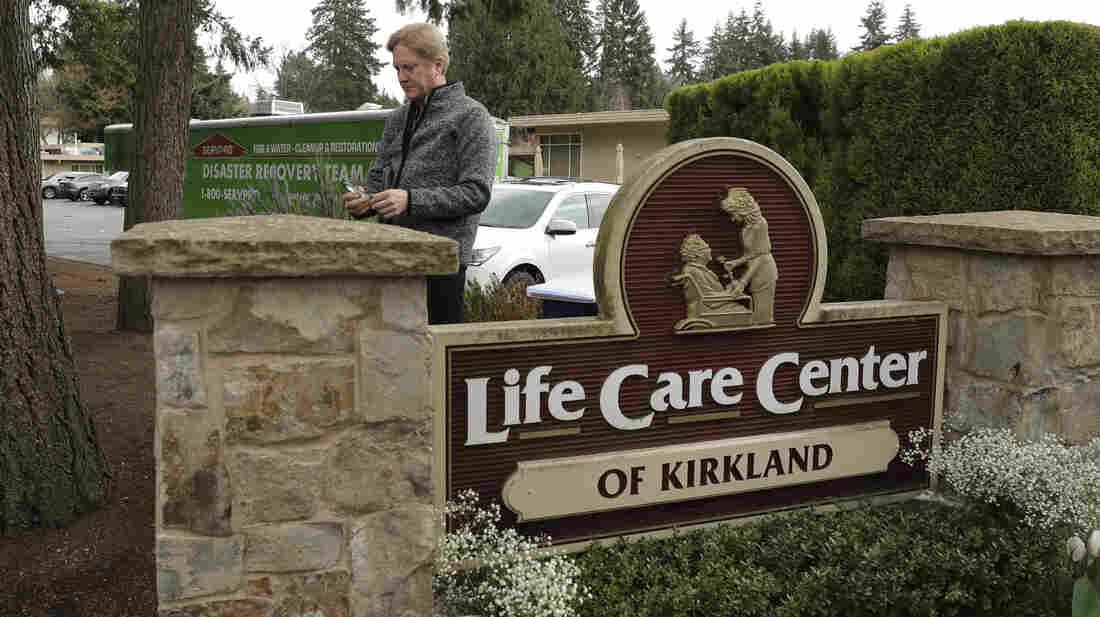 Tim Killian, a spokesman for Life Care Center in Kirkland, Wash., prepares to give a daily briefing to reporters on Wednesday. Ted S. Warren/AP hide caption 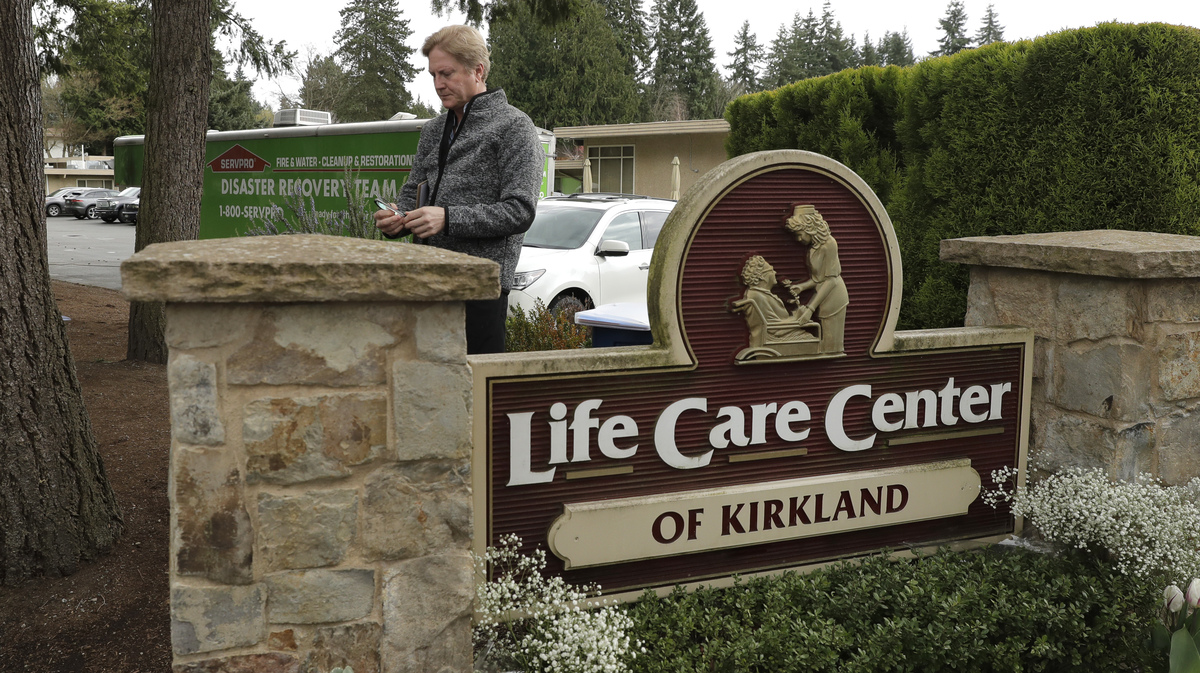 Tim Killian, a spokesman for Life Care Center in Kirkland, Wash., prepares to give a daily briefing to reporters on Wednesday.

It's been two weeks since the public learned about a deadly outbreak of coronavirus at Life Care Center of Kirkland — a long-term care and nursing facility in Washington state — and some families wait on edge over loved ones who remain there.

As of Friday afternoon, only about a third of the 120 residents who were living at the facility in mid-February remain. There are 25 people associated with Life Care who have died after being infected with coronavirus. Other residents are in the hospital.

As more nursing facilities in Washington report cases of coronavirus, the death toll at Life Care serves as an example of the vulnerability of the elderly in the growing pandemic.

"I can stay here"

Two years ago after suffering a minor stroke, June Liu had no interest in moving into a long-term care facility.

The now 93-year-old lived alone, rode the bus and shunned the use of a walker. But Liu's daughter Su Wilson says it didn't take long for Life Care Center of Kirkland to become her mother's home.

"She kept telling me they are very nice to me, they are good, I can stay here," Wilson says.

Wilson and her husband Arnie live 10 minutes away from the Kirkland facility.

Several times a week, she'd bring her mother over to their bustling home where chickens roam around the yard, to see her great-grandchildren. On Sundays, her mother would be ready at 9:30 a.m. for church.

"It's just like life had such joyful meaning to her," Wilson says. "I would always laugh and say, 'mother you are going to live longer than me.'"

Wilson holds her smartphone and scrolls through photos of her mother out with their family – some taken just a few months ago.

"We went out to the Chinese restaurant, we were all eating together, the whole family," Wilson says with a smile.

Wilson can't make sense of how these happy routines could change so fast.

Last month, she and other families discovered coronavirus had begun to sweep through this suburban community on the banks of Lake Washington.

Wilson's mother and many others who lived and worked at Life Care eventually tested positive for the virus.

"As soon as she [found] out she's positive, she no longer [wanted] to talk on the phone," Wilson says. "It [was] hard to understand her on the phone... her voice [was] so weak."

Wilson worries her mother's health is deteriorating. While she believed the nurses were doing the best they could, her mother was isolated: stuck in a room, unable to visit with her family and only able to understand a little bit of English. Liu watched other residents being wheeled away on stretchers, unlikely to return.

"I think [she was] in shock and also to find out she's going to die," Wilson says. "I think she [knows] because she's clear."

Wilson finds herself in a heartrending predicament as her mother lingers at the facility until she's no longer contagious.

Parkhill says her mother went to the hospital when her symptoms worsened and tested positive for the virus. Once she was stabilized, Hailey was then brought back to Life Care.

"The hospitals don't have any beds for people who don't have acute respiratory distress," Parkhill says.

Parkill and her sister, Carmen Gray, wait outside her mother's window in the cold to check on her.

"We're hoping that mom is strong and going to come out of this on the other side OK," Gray says.

She worries the facility's staff are overstretched, and her mother isn't able to move around or bathe properly.

Life Care does not prohibit anyone from leaving, but families can't necessarily bring their loved ones home and run the risk of exposing others to the virus.

"There is nowhere else for these patients to go, it has been deemed that it's best to keep them on site and being treated here," says Timothy Killian, a public information liaison for Life Care Center of Kirkland.

Killian says local hospitals won't admit patients unless they have severe symptoms and other nursing home facilities are "unwilling" to take them because of their exposure to coronavirus.

And families aren't necessarily equipped to care for their relatives outside of the facility.

Laura Rightmyer says her family decided to pull her 93-year-old mother out of Life Care as the situation grew more dire.

"We felt like it was a death sentence for my mom... that her chances of getting it were obviously great," Rightmyer says.

Now her mother is living with her.

Rightmyer, who's a nurse practitioner, says she's doing better and doesn't appear to have the virus.

"I think we made the right decision for ourselves and for our mom," Rightmyer says.

Rightmyer says it's now proving difficult to find a doctor who will see her mother because she was associated with Life Care.

Su Wilson sends her mother homecooked meals and writes cards to cheer her up.

She hasn't been in the same room with her mother for more than three weeks.

"We worry about my mother, and I just feel like everybody [has] to die," Wilson says. "She [lived] a happy long life."

Wilson says she doesn't blame anyone.

"I just want to hold her hand," she says. "She's not frightened back in the loneliness."