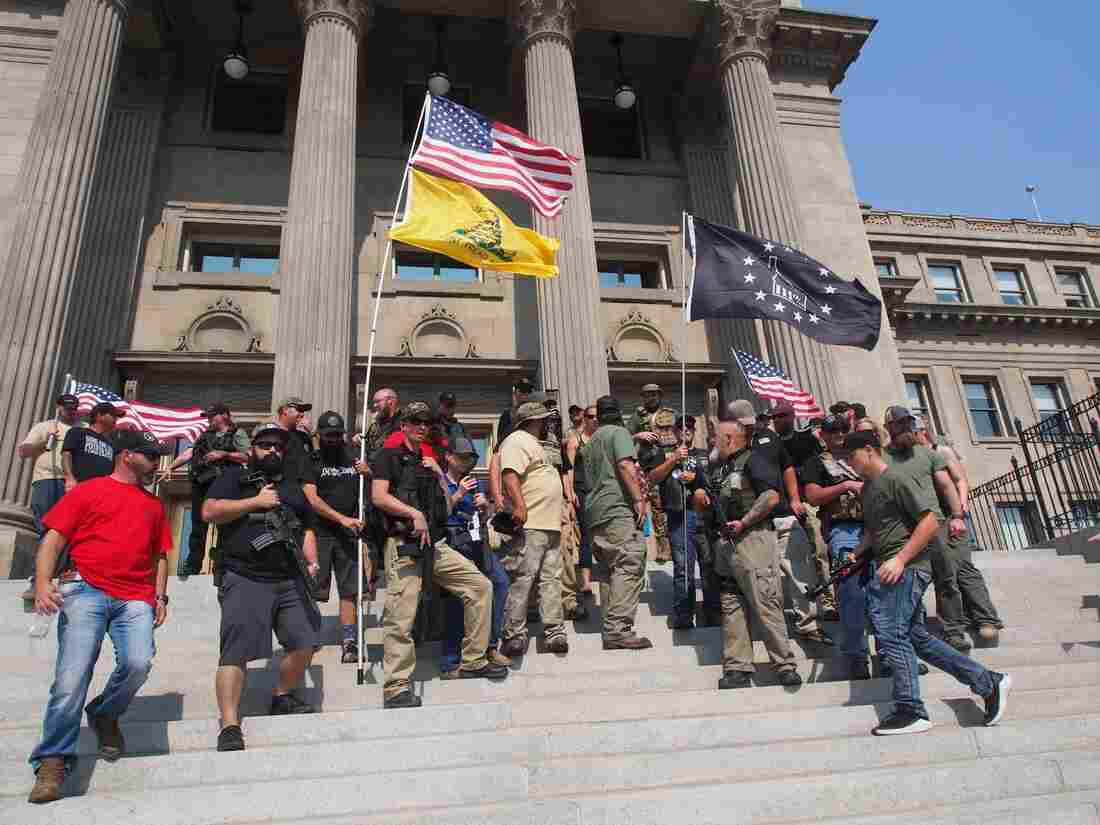 Gun rights supporters, including militia members, rally in support of gun rights in September 2018 during an event put on by the Idaho Second Amendment Alliance. The alliance and groups like it around the country have been pushing back against efforts to increase gun regulations in the wake of high rates of gun violence. Heath Druzin/Boise State Public Radio hide caption 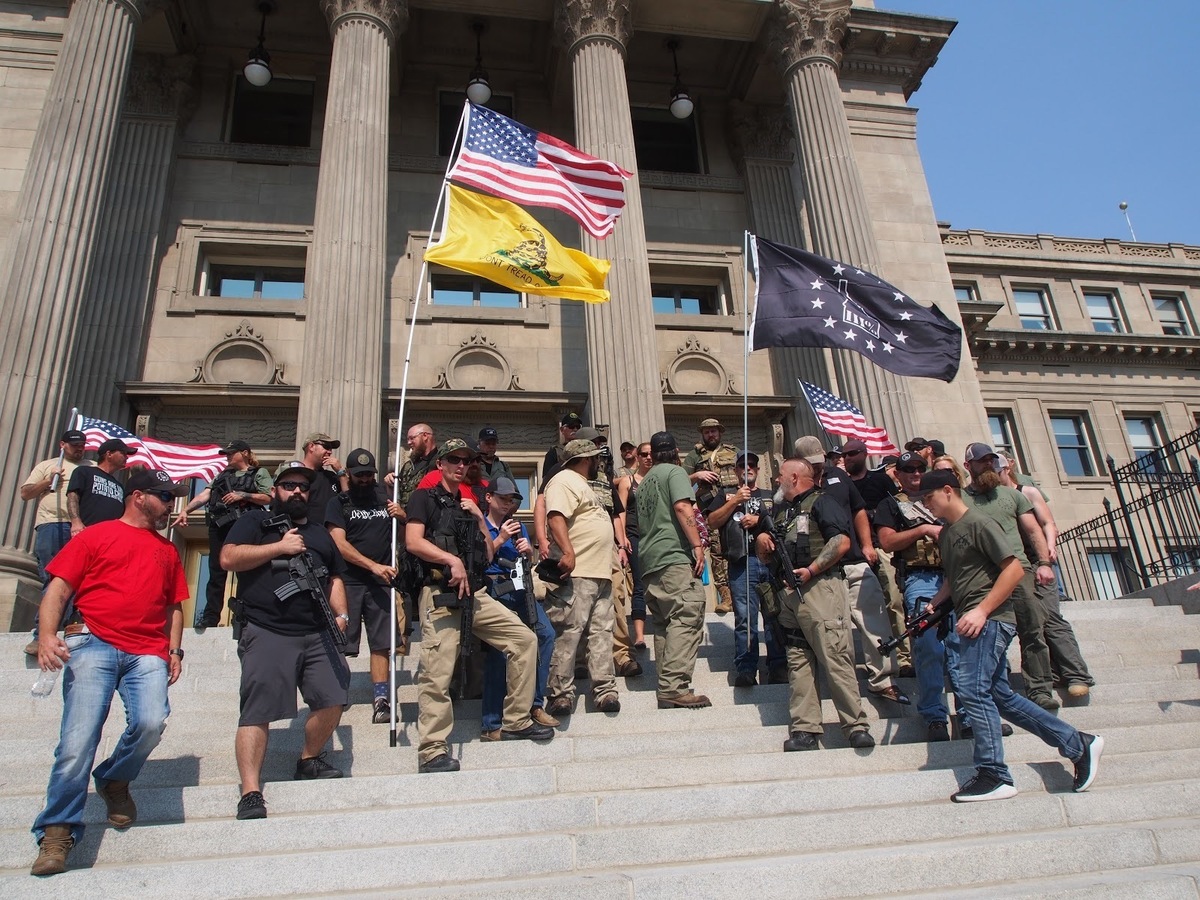 Gun rights supporters, including militia members, rally in support of gun rights in September 2018 during an event put on by the Idaho Second Amendment Alliance. The alliance and groups like it around the country have been pushing back against efforts to increase gun regulations in the wake of high rates of gun violence.

America has one of the highest rates of gun violence in the developed world. That and the steady drumbeat of mass shootings, has led many states to pass stricter firearms regulations in recent years. But gun rights groups in more conservative states, such as Idaho, are pushing legislatures to go in the opposite direction.

One of the groups is the Idaho Second Amendment Alliance. On a recent March day, its president, Greg Pruett, was peering into his smartphone at the Idaho Capitol making yet another Facebook video.

"We fight hard, we play for keeps, we take no prisoners," he said. "We'll get in the trenches and fight dirty. We're here to save Idaho."

There's been a lot of talk about guns from national politicians, but little action. The real fight is playing out at the state level. Pruett's group, for example, has pushed Idaho to get rid of nearly all of its regulations.

And now lawmakers are poised to drop restrictions on out-of-state residents' right to carry concealed weapons. That proposal sailed through the Idaho House and will likely pass the Senate. It's one of the last state gun restrictions left.

Pruett said he took to lobbying state legislators when he saw no action from Washington.

"The Republicans didn't do gun owners any favors in the first two years of President Trump's tenure when they had control of the House and the Senate and obviously the White House," he said.

Idaho has long been gun-friendly, but the state's absolutist turn is more recent.

Federal legislation pushed by gun rights groups, such as a proposal to force all states to recognize concealed carry permits from other states, has stalled. In that atmosphere, a loose affiliation of "no-compromise" gun groups, like Pruett's, have been pushing lawmakers in conservative states farther to the right on firearms. These groups look down on the National Rifle Association as too soft on gun rights. And they've been making headway. 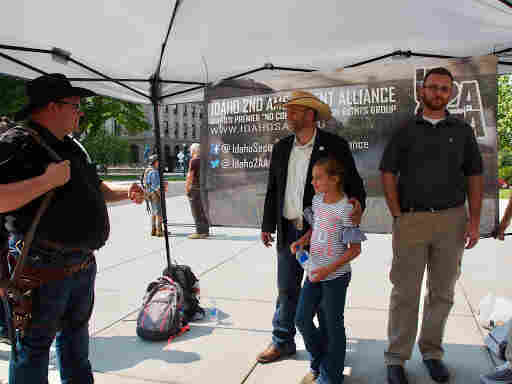 Wyoming dropped its permit requirement for carrying concealed weapons, Texas passed a law last year allowing guns in places of worship, and many more bills are in the works across the country.

Back in Idaho, the climate has gotten to the point where onlookers barely reacted when an older man and young girl with a rifle slung over her shoulder stepped up to the podium in February to testify in a legislative committee hearing.

"My name is Charles Nielsen," the man said. "This my granddaughter, Bailey. Bailey is 11 years old. Bailey is carrying a loaded AR-15."

"If one wanted to figure out at how successful the gun rights movement has been you wouldn't look to Congress, you would look to the states," he said.

And this is happening as the trend is going in the opposite direction in much of the country. Idaho's neighbor, Nevada, enacted sweeping firearms regulations last year. In February, New Mexico lawmakers passed a red flag law, meaning courts can temporarily remove guns from at-risk people. And Colorado's new red flag law went into effect in January.

Winkler says gun groups are trying to fight that tide by remaking the gun rights map state by state.

"I think the gun rights groups do have a larger strategy that explains things like what's happening in Idaho," he said. "The idea is to keep the momentum alive for lifting the restrictions on guns in America.

In Idaho, what's also telling is what hasn't passed. Bills to keep guns away from certain sex offenders and domestic abusers both failed in the past two years.

Boise Democrat Melissa Wintrow introduced those bills and was shocked at the outcome. This session, she's not even trying to push them through, confident Republicans won't touch gun laws in an election year. That's because Pruett's group has made a habit of supporting successful primary challengers to incumbents who cross them.

"I've seen some really good representatives that have lost the elections because they haven't made the emotional vote that some of those special interest groups want," Wintrow said.

She said some Republicans who voted "no" on her bills privately told her they support her efforts.

That same day Wintrow said gun lobbyists had killed yet another of her bills. This one would have extended protections for sexual assault survivors.

This story was reported as part of Guns & America, a public media reporting project on the role of guns in American life.