Accessibility links
Virtual Happy Hour Anyone? Working From Home But Keeping Connected How do you keep your office connected when people are working from home and practicing social distancing? One CEO is throwing virtual happy hours and online karaoke parties. 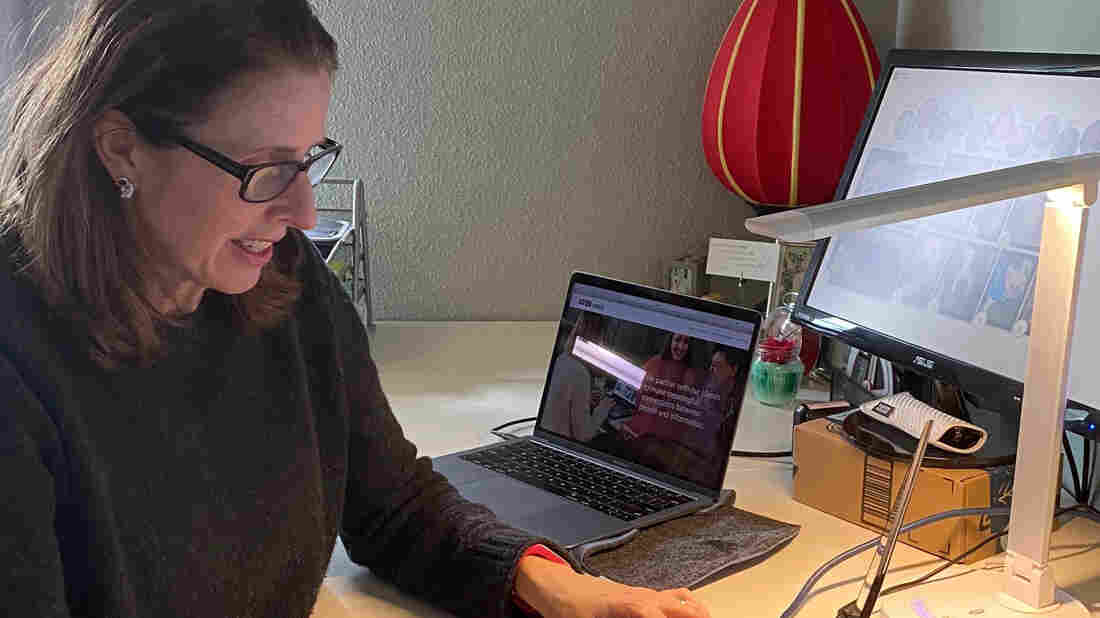 Kate Walton, the CEO of Steyer Content, in her home office on Bainbridge Island, a ferry ride away from Seattle. Her company does $9 million in sales annually, providing marketing materials for companies such as Microsoft. Anna Walton hide caption 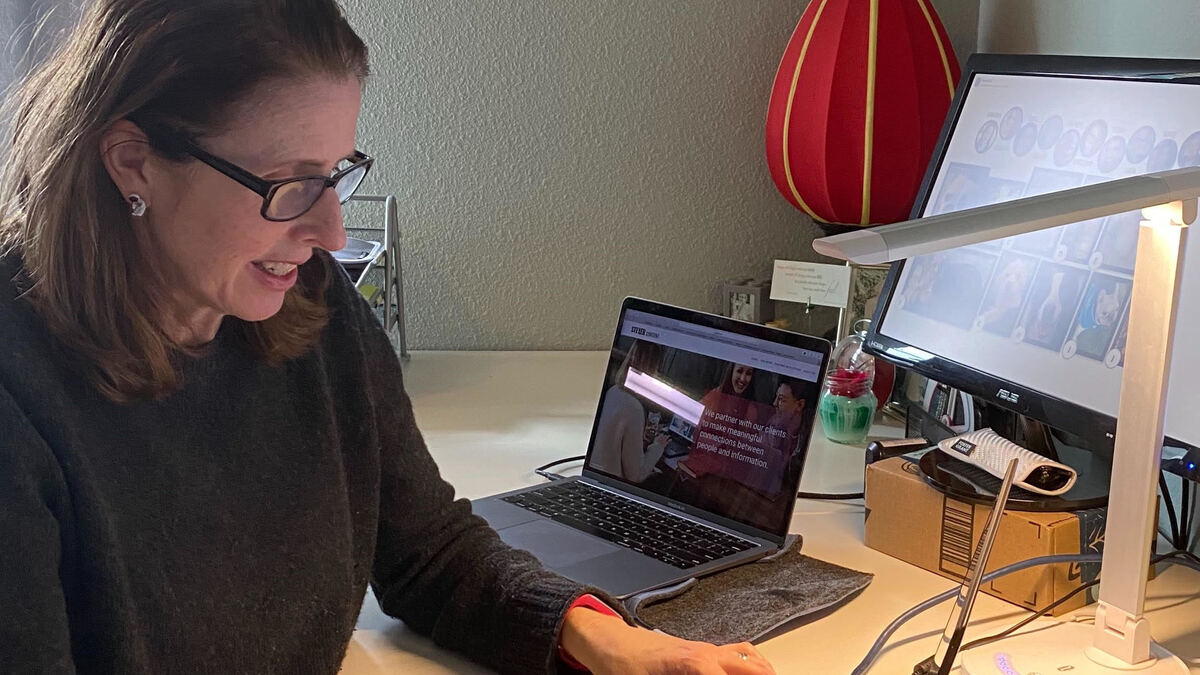 Kate Walton, the CEO of Steyer Content, in her home office on Bainbridge Island, a ferry ride away from Seattle. Her company does $9 million in sales annually, providing marketing materials for companies such as Microsoft.

To limit exposure to the coronavirus, many companies across the U.S. are urging, and some are mandating, that employees work from home.

Plenty of employees are embracing the new rules, happy to avoid their daily commute and to work in their pajamas. But when a company's employees are suddenly no longer under one roof, it can be a nightmare for managers.

But it doesn't have to be.

Kate Walton, the owner and CEO of Steyer Content, which has its headquarters in Seattle, has decades of experience running a company where nearly all of the employees and contractors work remotely.

"We've, for quite a number of years now, had an online community where we gather every day," says Walton. "That's where we collaborate. That's how we connect in normal times."

But these are not normal times.

When the Seattle area emerged as the epicenter of the coronavirus outbreak in the U.S., Walton canceled the company's monthly lunches. While she was already connected to employees online, those tools became even more important.

Probably the most useful tool, says Walton, is Slack, a messaging platform where co-workers can post and exchange ideas in groups and channels.

While it's primarily used for work, Walton also uses Slack to hold trivia contests, to celebrate birthdays and to ask people to post photos of their pets --not unlike you might see happening in a brick-and-mortar office. 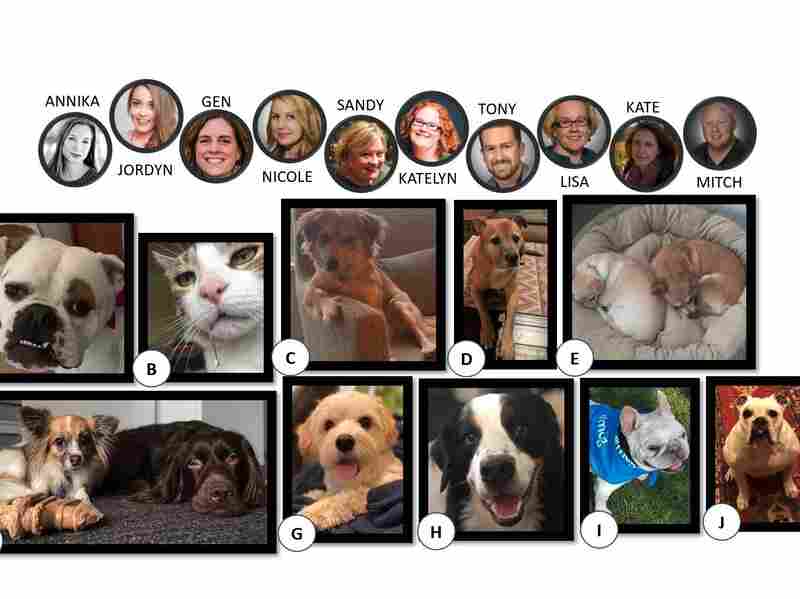 A recent contest was to match the creatures to their humans. Screengrab by Kate Walton hide caption 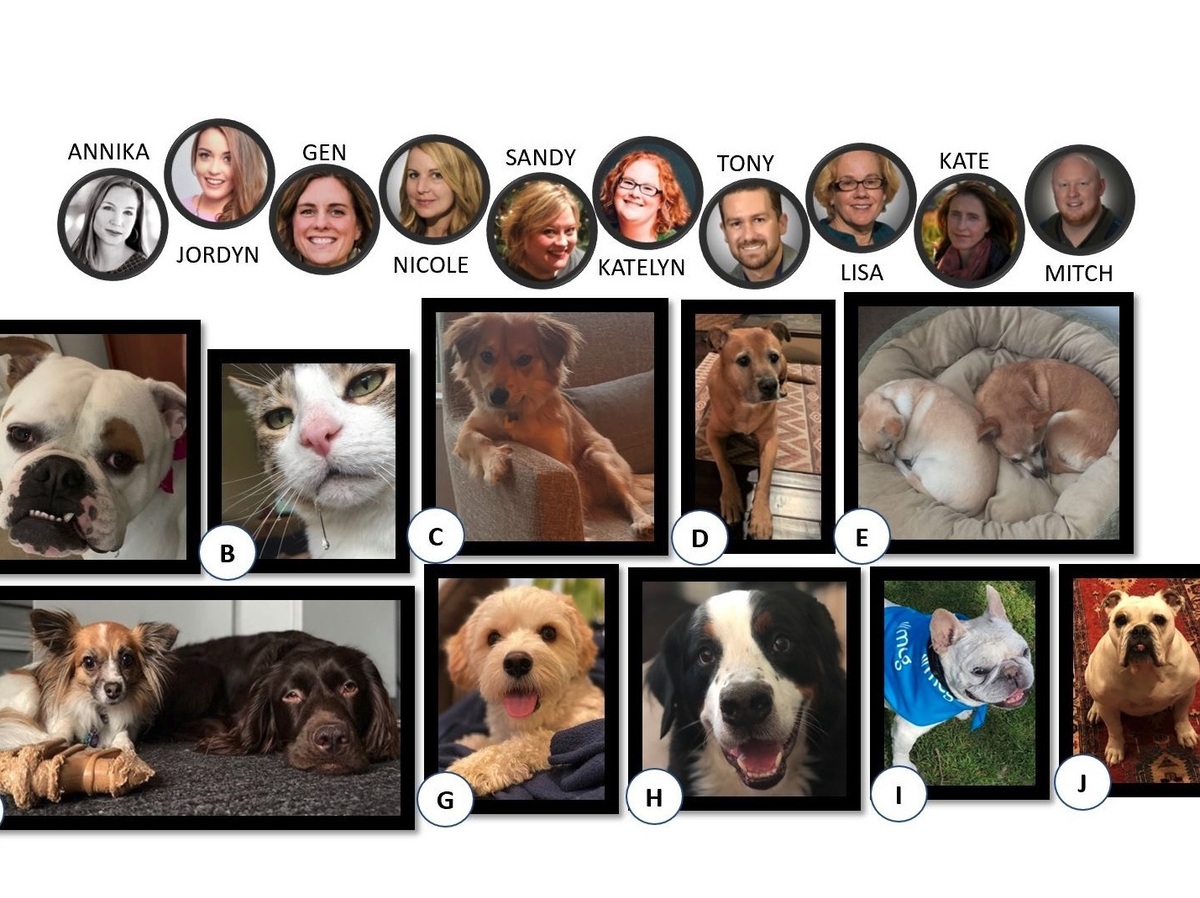 A recent contest was to match the creatures to their humans.

The online exchanges are wildly popular, with people talking about books they're reading, debating the merits of particular fonts and, of course, since this is Seattle, sharing their favorite hiking trails.

Less popular, it turns out, was Walton's invitation for people to take part in an online seven-minute workout challenge. Only one other person has joined her, she says wistfully.

As the news about the coronavirus became more dire, Walton decided to get more creative. The company recently held its first virtual happy hour, with people joining in on a video call with their favorite drink after work.

"It was quite simply a way for us to shoot the breeze, you know, from a safe distance, to kind of have a little bit of that water-cooler effect that even after a few days we were starting to miss," she says.

The first happy hour was so popular that they held it again last Thursday. And several employees are eagerly figuring out how to make a virtual karaoke party happen.

Such efforts are not time wasters, says Walton. Creating a sense of community helps her attract strong talent, which is a huge competitive advantage. 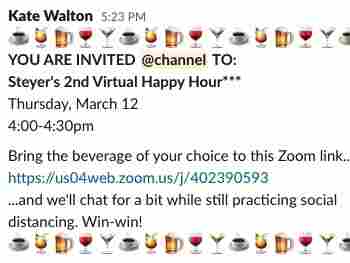 But it's more than that.

"Tending to the mental and emotional health of our teams needs to be our top priority," says Walton. "I mean, I really see that as part of the response, even before you get to the smaller issue of how to keep a business going through times like this."

Walton says the trick is not to force the connections, but rather give permission to be creative and see where employees take it.

What it comes down to, Walton says, is connections. In times of uncertainty, we want to know we're not alone.

"It's something that humans crave," she says. "I mean, it's that fundamental."