Accessibility links
Travelers Greeted With Hours-Long Airport Lines As Coronavirus Screenings Begin Across the U.S., airport lines stretched for up to eight hours in some cases, as workers rushed to conduct medical screenings of those arriving from mainland Europe, now the epicenter of the outbreak. People wait in line to go through customs at Dallas/Fort Worth International Airport on Saturday. International travelers reported long customs lines at the airport Saturday as staff took extra precautions to guard against the new coronavirus. Austin Boschen/AP hide caption 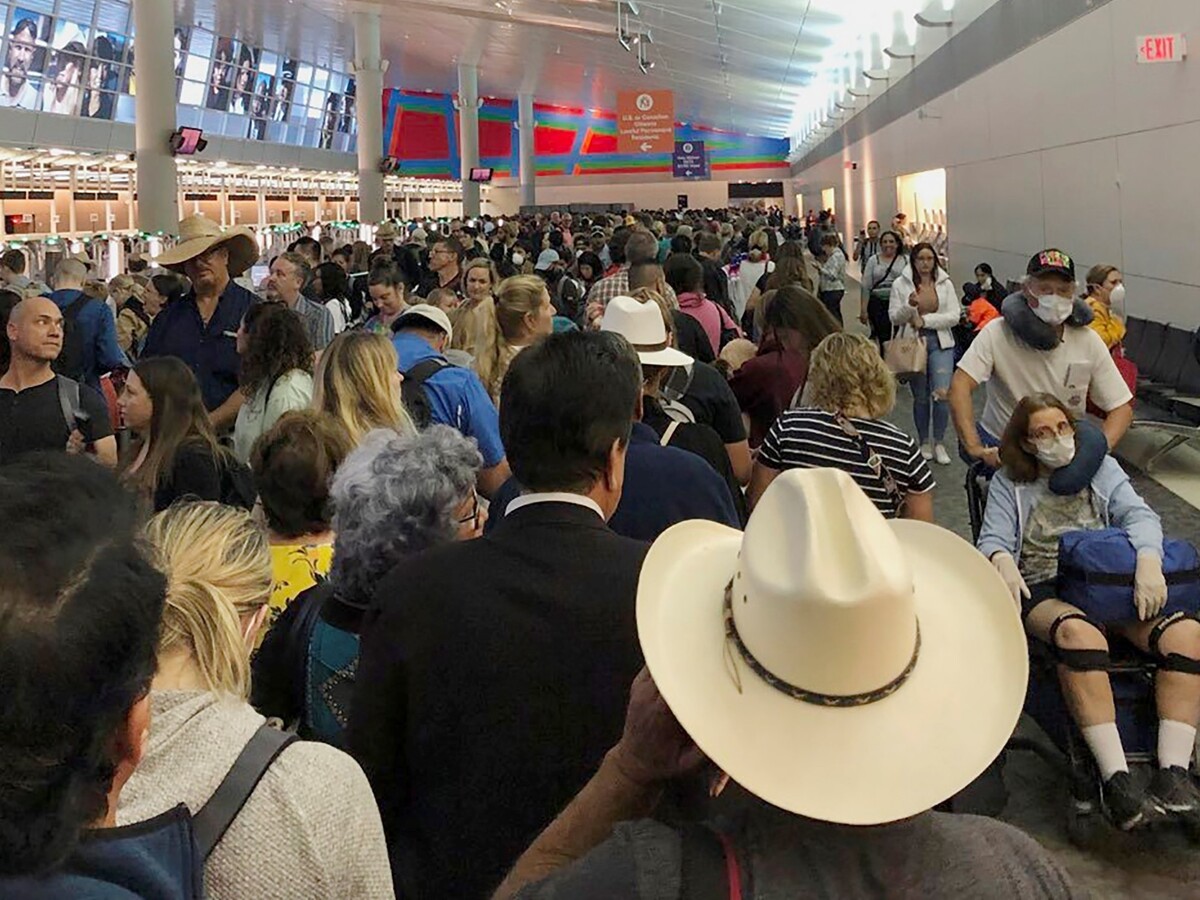 People wait in line to go through customs at Dallas/Fort Worth International Airport on Saturday. International travelers reported long customs lines at the airport Saturday as staff took extra precautions to guard against the new coronavirus.

Airline passengers returning to the U.S. were confronted with snaking lines causing hours-long delays and confusion at airports around the country starting Saturday as a result of required medical screenings now in place to combat the spread of the coronavirus.

Frustrated travelers took to social media to gripe about the winding lines causing passenger congestion in airports including Chicago's O'Hare International Airport, where some travelers reported waits of up to four hours. A U.S. senator from Illinois said he heard of lines stretching up to eight hours.

This is the scene at O’Hare airport. The traveler who took the photo said it’s a 6-hour wait for bags then on to customs for 2-4 more of waiting in shoulder-to-shoulder crowds. Police are handing out water and disinfectant wipes. @fly2ohare #ord #coronavirus #COVID19 pic.twitter.com/UTx9E0nj1s

The Trump administration is restricting travel from 28 European countries, which now include the United Kingdom and Ireland. Europe, the World Health Organization has declared, is now the epicenter of the pandemic.

U.S. citizens and legal permanent residents are permitted to return from those countries, but they must go through health screenings. And the mayhem set off by the implementation of the new health measure came into full view on Sunday.

DFW customs line over 3 hours. CDC here and no one knows what’s going on. #coronavirus pic.twitter.com/8nnvUDhRts

The dense crowds come despite U.S. health officials urging people to engage in "social distancing" to curb the spread of infections.

Just waiting in a very long line with thousands of people to clear Customs at JFK T4. Not sure who's really taking things seriously. @JFKairport @DHSgov @realDonaldTrump pic.twitter.com/0xjV42V2zs

Chicago Mayor Lori Lightfoot said at a Sunday news conference that the Trump administration did not consider the concerns of local officials before implementing the enhanced medical screenings, saying the mayhem at airports was "solely the responsibility of the federal government not listening."

When local considerations are not factored into decisions like the new medical screenings, federal officials "risk causing serious illness and death," Lightfoot said.

Chicago officials said they have asked federal aviation officials to relax restrictions to allow passengers to remain on planes longer and to stagger flights more.

"We've had some conversations last night and today with DHS and me with the White House and others to break the logjam," Lightfoot said. "Fundamentally, this comes down to personnel. We need more screeners here at O'Hare. And they need them at other airports around the country."

"The crowds & lines O'Hare are unacceptable & need to be addressed immediately," tweeted Pritzker. "These crowds are waiting to get through customs, which is under federal jurisdiction."

The Trump administration said it is aware of the lines frustrating travelers, with the acting secretary of the Department of Homeland Security, Chad Wolf, saying that additional screening capacity is being added in an effort to speed up the process.

"Right now we are working to add additional screening capacity and working with the airlines to expedite the process," Wolf tweeted. "I understand this is very stressful. In these unprecedented times, we ask for your patience."

DHS is aware of the long lines for passengers who are undergoing increased medical screening requirements. Right now we are working to add additional screening capacity and working with the airlines to expedite the process. 1(/2)

Paige Hardy, an American student traveling back home from London, posted a video of passengers being asked to raise their hands if they had been to mainland Europe.

"After being told to write down emergency contact numbers and to prepare to potentially be emergency evacuated, we were let off the plane. No communication to flight attendants or passengers. Truly one of the most terrifying experiences of my life," Hardy said.

Landing in the DFW from London and all people who came from Europe are required to raise their hands to get forms to fill out pic.twitter.com/aPo6TZW3ya

The outbreak of the novel coronavirus that causes COVID-19 has so far infected 156,000 people worldwide. In the U.S., there have been nearly 3,000 reported cases and 57 deaths.

While the majority of people who become infected are expected to not show symptoms or recover from a fever or cough without needing treatment, those over 60 years old or with underlying health conditions, such as heart disease, diabetes and lung disease, are the most vulnerable.

Critics of the Trump administration accused it of bungling the launch of the airport medical screenings.

Sen. Dick Durbin (D-Ill.) tweeted before midnight Saturday that he has heard of backups as long as eight hours at O'Hare.

"In contact with @GovPritzker about arriving passenger delays at @fly2ohare of up to eight hours waiting for luggage, immigration, customs, & possible medical screening. Appears source of delays all federal and Admin was unprepared after Presidential ban on travel from Europe," Durbin said.

Mark Morgan, acting commissioner of Customs and Border Protection, on Sunday asked for travelers to stay calm, saying that he realizes the new medical screenings can be "extremely frustrating" but that "nothing is more important than the safety, health and security of our citizens."

We are aware of the reports of increased wait times at some airports across the nation. CBP along with medical personnel are working diligently to address the longer than usual delays. Nothing is more important than the safety, health and security of our citizens. Full statement: pic.twitter.com/JyPRSS9snr