Accessibility links
Watch Live: White House Says Up To 4,000 Coronavirus Tests A Day The Trump administration said Sunday that first responders, medical providers and the elderly will be given priority as officials strive to dramatically expand the availability of testing. 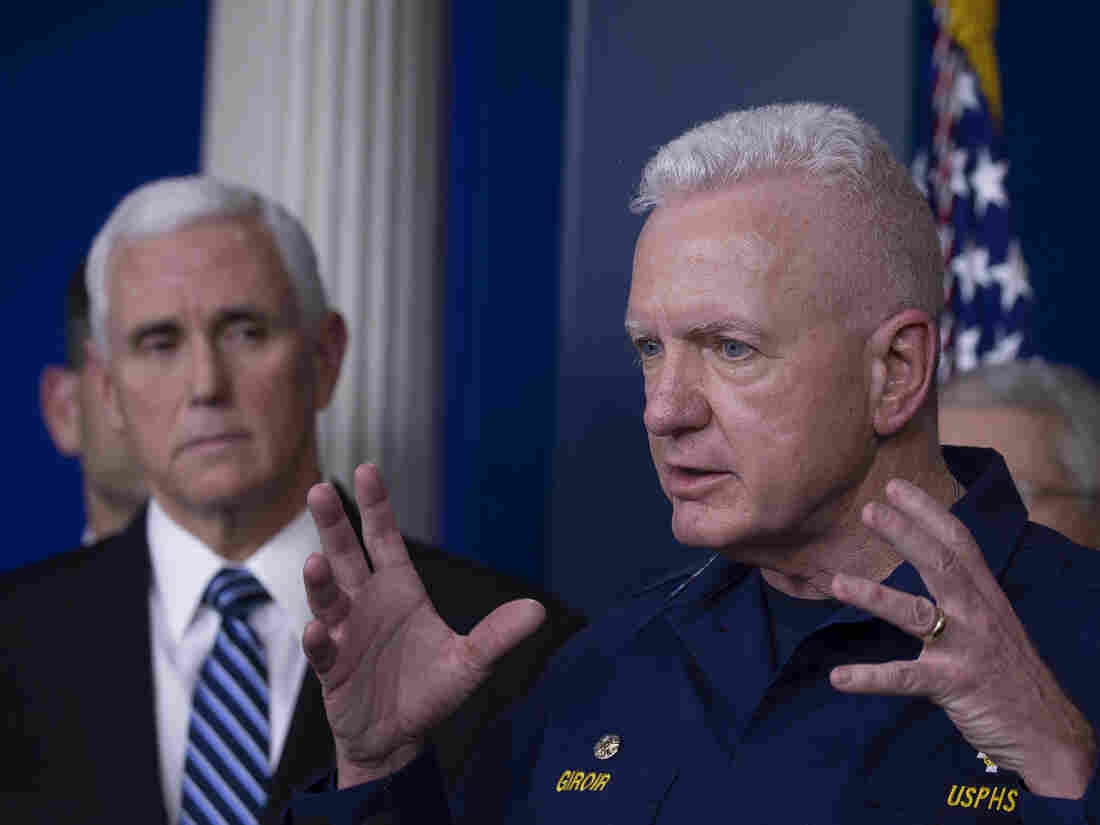 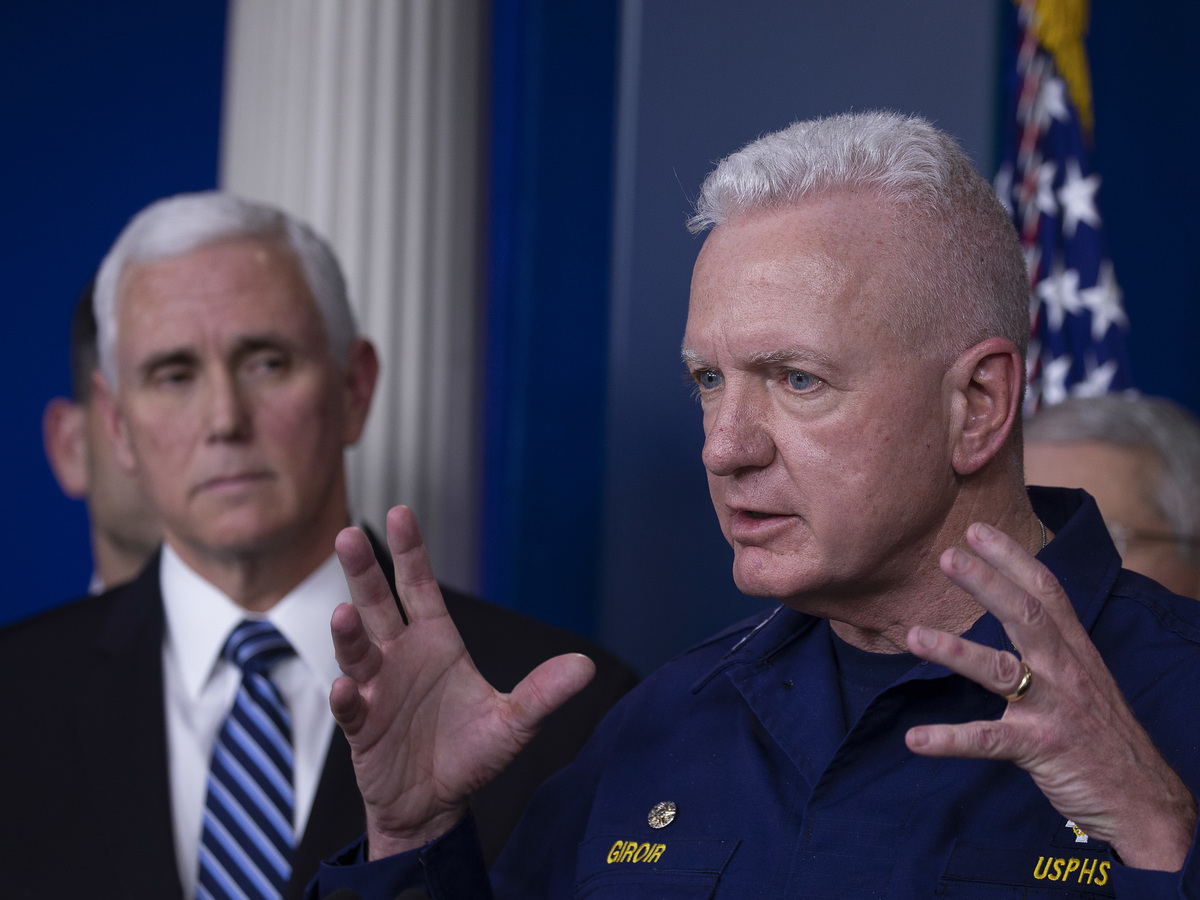 Admiral Brett Giroir describes the effort to ramp up testing.

States hit hardest by the spread of coronavirus will see drive-through and walk-through testing sites set up this week, the White House said on Sunday, a shift that will provide more information about how widely the virus has spread across the country.

The sites each will be able to screen 2,000 to 4,000 people per day, with priority given to health care workers, first responders and people age 65 and older with respiratory symptoms and fevers above 99.6 degrees.

The Trump administration has been criticized for the lack of testing, which public health experts have said has masked the prevalence of the virus. Early on, there was a problem in test kits distributed to labs by the Centers for Disease Control and Prevention, which slowed efforts to make testing more widely available.

President Trump declared the virus a national emergency on Friday, a move that freed up billions in funding and also activates the Federal Emergency Management Agency to help set up testing sites and field hospitals.

"We are going from somewhat manual, relatively slow phases, to a testing regimen that we can test many tens of thousands to hundreds of thousands of individuals per week, and maybe even more," said Adm. Brett Giroir, who is leading the Department of Health and Human Services' efforts in coordinating coronavirus testing.

Nearly 2 million tests will be available this week and more than 10 states now have drive-through testing sites, officials said.

Dr. Deborah Birx, who is part of the White House's coronavirus task force, said that as testing ramps up, the number of reported coronavirus cases will rise. She urged Americans to let the most vulnerable people go first. "I know everybody's going to want to go to these drive-throughs," she said.

"The worst is yet ahead of us"

The increase in testing comes as the outbreak enters a critical stage, said Anthony Fauci, the director of the National Institute of Allergy and Infectious Diseases.

"The worst is yet ahead for us," he said, warning that Americans need to take steps to reduce the risk of spreading the disease. "It's how we respond to that challenge that will determine what the ultimate endpoint is going to be."

Fauci said the CDC will issue new guidelines on Monday about "social distancing," and said that it may be possible that the government recommends places like bars and restaurants shut down. "Everything and anything, we'll consider," he said.

The CDC on Sunday said it recommends canceling or postponing events like conferences, sporting events and weddings that have 50 people or more.

Health and Human Services Secretary Alex Azar said the pandemic may exceed the capacity of the hospital system, and said the government was working to increase its supplies of ventilators, field hospital units and supplies for health workers.

Trump spoke to CEOs of grocery and food companies on Sunday and urged them to keep store shelves well-stocked. Trump urged Americans to stop panic-buying, as customers strip shelves bare of products like hand sanitizer, toilet paper and face masks.

Vice President Mike Pence urged people to stay home from work if they felt sick. "No American worker should worry about missing a pay check if they're feeling ill," he said.

Responding to criticism that a new paid sick leave package agreed to with the House of Representatives early on Saturday does not cover workers for companies with more than 500 companies, Pence said: "We have every confidence that the extension of paid and family leave to Americans will be extended in a way that should give every American that confidence."

On Friday, the White House had promoted a website it was developing with Google to help screen people and direct them to test sites — a website that Google afterward said was only in its early stages, and was a pilot for California's Bay area.

He said a website with a questionnaire for people worried they have the virus would be available early this week, and said it eventually would help people find out how to get tested.

Verily, a life sciences division of Google's parent company, published a statement saying it would launch its pilot for screening and testing in San Francisco's Bay Area on Monday — beginning with people who are at highest risk from the virus.

"The program is in its early stages, and we will take the time to assess operations at pilot sites in the Bay Area before rolling out to additional sites," the company said.

Google said it was "partnering" with the government on a "nationwide website" with information about symptoms, risks and testing information.

“We are fully aligned and continue to work with the US Government to contain the spread of COVID-19, inform citizens, and protect the health of our communities. (1/6) https://t.co/eI1uXra6AB

Stung by criticism that the White House had overstated the readiness and the scope of the website, Trump said Google's statement "substantiated what I said on Friday" and complained about coverage of the discrepancies.

NPR's Shannon Bond and Roberta Rampton contributed to this story.