Accessibility links
What 10 Students Learned From Having To Say Their Worst Thoughts On Race Out Loud In 1973, five black students and five white students were told to go around the room and say what they really thought about people of the other race. It bonded them in ways they never expected. 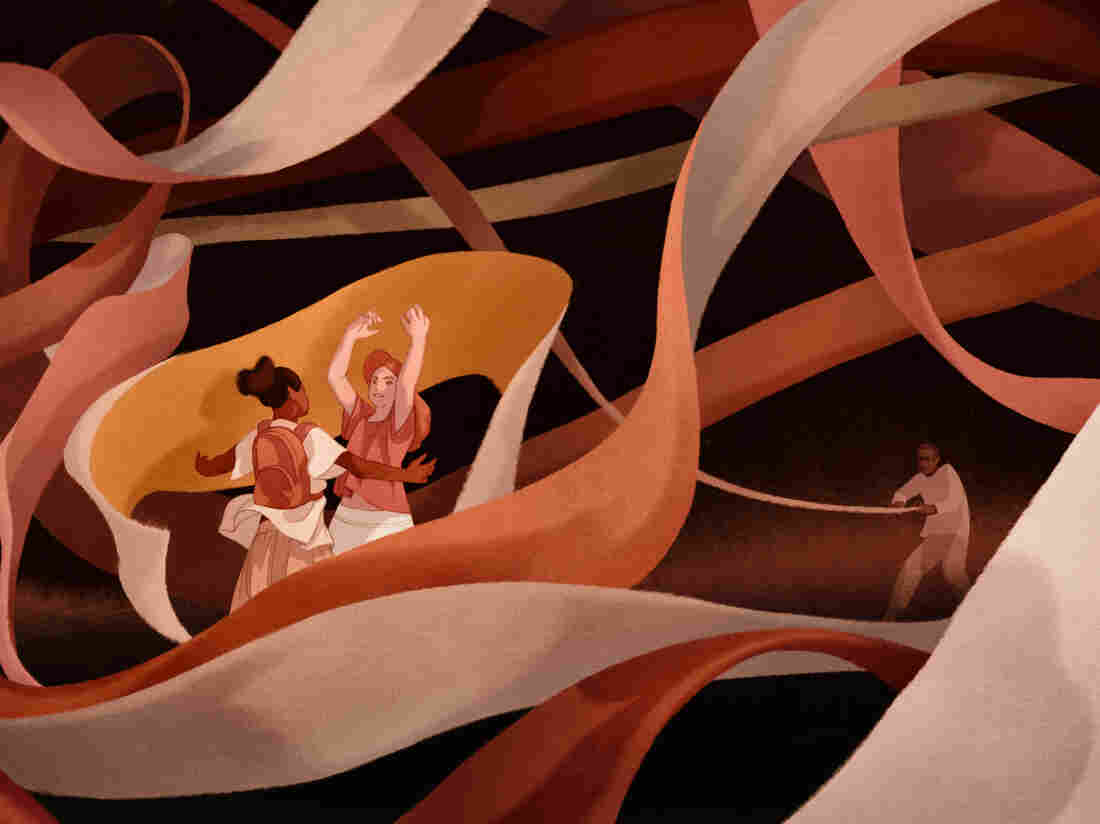 In the 1970s, professor Peter Kranz asked what would happen if students went around the room and said what they really thought about people of the other race. Leonardo Santamaria hide caption 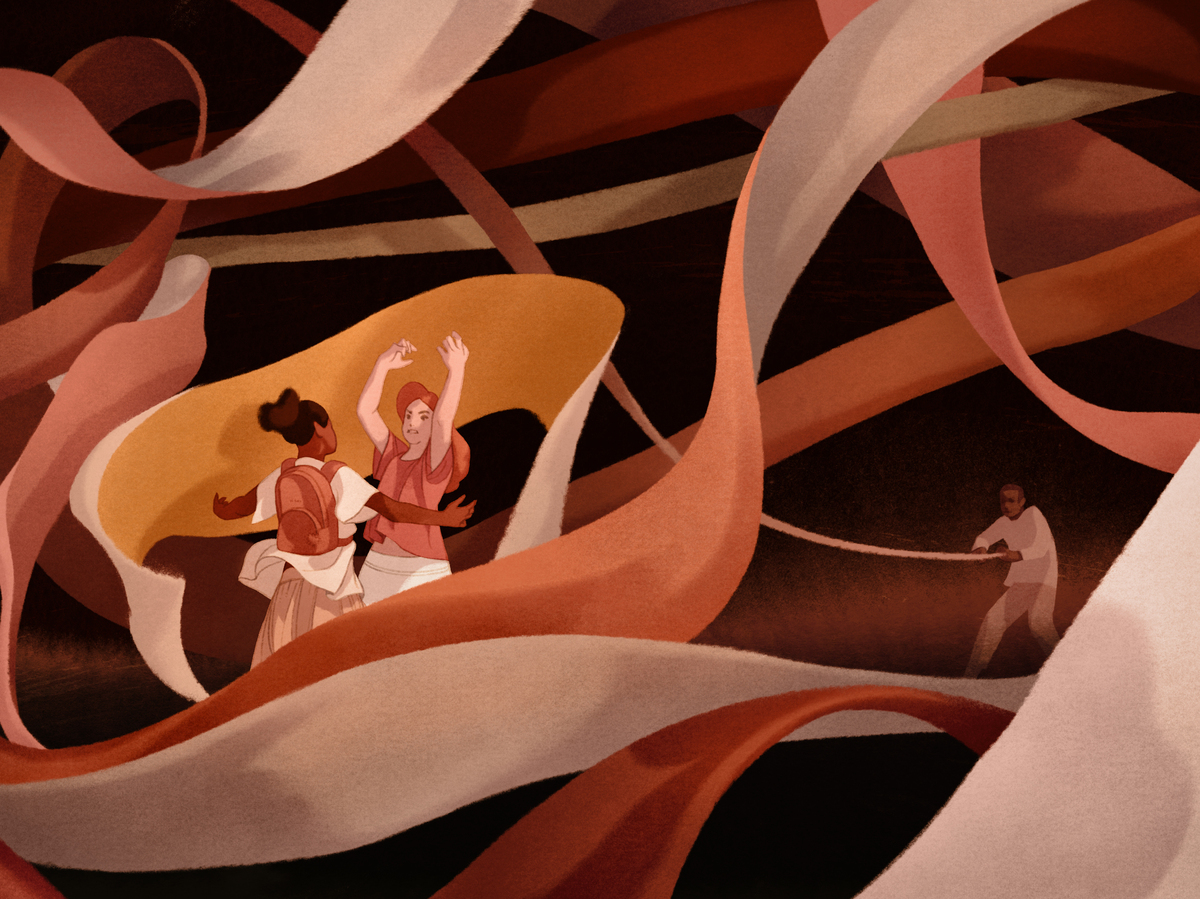 In the 1970s, professor Peter Kranz asked what would happen if students went around the room and said what they really thought about people of the other race.

The first time Judi Benson heard the unfiltered truth about race from a black person, she was 25 years old. It was 1973 and she was taking a class at the University of North Florida in Jacksonville called "Human Conflict: Black and White."

The class was radical for its time and place. In the early 1970's Jacksonville, was still raw around civil rights — new to school busing, still struggling with desegregation in its jails. It was a city divided, with violent race riots in its recent history.

But when Benson arrived for the first day of class, she thought she was beyond all that. As she wrote in a journal she was made to keep for the class:

"Like the other whites in the class, I thought that day that I had it all together and would show any racists in the group a thing or two, as well as demonstrate to the black sisters and brothers how hip I was."

She was in for a rude awakening. There were 10 students in the class — five black, five white — and the professor, Peter Kranz. One of the first things he did was direct the students to go around the room and say what they really thought about people of the other race.

So they did, one by one, as Kranz, who is white, wrote their statements up on the board. Nearly 50 years later, Benson can still recall some of those statements.

"All whites are rich, blacks steal. All whites are racist and you can't trust them ... Black men want to rape white women. White men want to rape black women," she remembers. "The one that really surprised me was when they said they didn't think white people loved their children. That's why they had mammies to look after them. It came up that white people thought black people smell, but guess what? Black people think whites smell like wet dog."

These days, when almost six-in-10 Americans say race relations in the U.S. are bad, we rarely hear about racial confrontation going well — especially the kind Kranz facilitated, where people are encouraged to say, to each other's faces, the unacceptable things they think in secret. Whether they happen online or on the street, these types of encounters end in vitriol or even worse, violence.

But this 1973 classroom was a rare example of a successful attempt. Here was a teacher who decided the only way to make racial progress was for students of different races to actually confront each other. So he decided to risk it. He would unleash all the ugly feelings in the hopes that he could channel them into something good. And in the chaos they found catharsis.

No place for politeness

Philip Mobley was 19 when he took Kranz's class.

"I was the one that said that I thought that white people, when they got wet, smell like a dog, because that's what I had heard. I remember saying that," says Mobley.

He was also the one who said he thought white people didn't love their children, because if they did they would raise them themselves instead of hiring black nannies.

Mobley was raised to hold his tongue around white people. As a kid, his father kept him mostly sheltered on the black side of town. But every once in a while, while out on errands, they would encounter a white person, like the one day when they went to a white butcher who got upset because they were late for an order and she had somewhere else to be.

"She talked to him like he was a child," says Mobley. "She just yelled at him as a child and he just said, 'Yes, ma'am. Yes ma'am.' And when he got back in the car, I was just like, 'Wait, why did you let this lady talk to you this way?' And to him, his response was, 'I have to take care of my family.'"

So when Mobley walked into the class, he had absorbed the idea that speaking honestly to white people wasn't an option. He described himself back then as very polite, kind of a nerd.

And really, in the beginning, all the students in the class were pretty polite.

"I would say way back then, like most people, I really tried to avoid confrontation at all costs. I was such a mouse," remembers Benson.

But there was no place in the class for politeness. The class was inspired by a program developed by two black psychiatrists, Price M. Cobbs and William H. Grier, authors of the 1968 book Black Rage. The idea of the book was that black people were enraged by all of it — racism, slavery, the everyday slights — and the resulting rage was suppressed and eating them away.

The solution they proposed involved putting black people and white people together in a room and making them speak directly and honestly about their feelings about one another.

"Confrontation was the method, and real understanding, by the participants, of the real problems between Blacks and Whites was the goal," writes Terence Clarke in his book An Arena of Truth, which recounts the story of Kranz's class and the ideology behind it. "It would be rough ... and the one restriction was that actual physical violence would not be permitted."

Kranz himself participated in one of Cobbs and Grier's workshops and took the lessons he learned into his work at the University of North Florida. It looked something like this:

In one of the more radical class requirements, each student had to stay in the house of a person of the other race for a week. For students, it was an unnerving demand, but ultimately central to the goal of Kranz's experiment: to foster racial empathy that would stretch far beyond the walls of a classroom.

Mobley remembers being so freaked out he made sure he had a friend nearby, as a lifeline.

"I remember telling him, I said, 'When we get here, I need you to kind of ride around for about 30 minutes because I'm not comfortable going and stay with these white people for a whole week."

But he did — they all did. Eventually, the stereotypes that students once held began to fade.

Mobley remembers the moment he saw a transformation among the students in the class.

"I think what was happening more is the white kids were feeling more emotional, embarrassed, and the black kids ... probably a little more assertive and free. You've been oppressed for so long, and then all of a sudden someone gives you the opportunity to say what you feel ... It was liberating."

After awhile together, they moved to a new phase, where instead of sorting by race, they divided along different lines, such as who liked weightlifting, who was a nerd, who was a parent.

It was a transformation that stemmed from what students described as the real lesson from the class: yes, confrontation is critical, but it's not the last stop. It's the start of a process — you say the secret out loud, to the person's face, then you sit and you listen. You walk away angry or defensive or still full of rage. But it doesn't kill you. You just go back and work through it.

"By having to expose yourself and finding that you weren't going to drop through into an abyss, that makes you stronger," says Benson. "And the first time you're able to say something honestly, without being attacked, it makes you stronger."

The lesson marked a radical departure from how we typically think about confrontation. When Kranz studied with Cobbs and Grier, he'd learned that people avoided confrontation because they thought it was the humane thing to do. They feared if they opened the door even a little, they might end up with a riot. But the result was a lot of suppressed rage and fear that was showing up on their bodies.

To be sure, Kranz's class was a highly-controlled environment, a safe space for hard conversations about race. The professor was a trained clinical psychologist and knew how to formally build in, as Clarke wrote in An Arena of Truth, "a period of cooling off and reflection." And some race scholars have pushed back against the idea of radical conflict, saying there are better ways to explore such troubling stereotypes.

Still, there were lessons in it for the broader world about how to normalize confrontation, and fit it into regular life.

Decades after the class ended, for example, Benson says she was no longer a mouse — not with her ex-husband, or mildly racist acquaintances, or anyone really.

For his part, Mobley found himself in the position of having to translate the method for his teenage son. One year, in his son's high school, the class president was black and the principal declared that, for the first time, the class president would not automatically get to deliver the school's commencement address.

"All of the black kids were angry," Mobley says. "And I remember they came to the house. We talked about it, we expressed that anger. And I prepared them to say, you need to go and let the administration know how you feel about it ... there is a need for certain people to be in your face ... At the same time, there has to be meaningful conversation behind it. Because if I'm just going to make you mad without doing the bonding and the education and the growth, all I've done is made you mad."

It's an obvious lesson except that it's difficult to execute. Often the default is to say nothing and simmer in rage, or explode. But because Mobley had that experience so many years ago, he was able to give his son options he didn't have as a kid: Don't get lost in the anger. But don't keep it in, because it can eat you from the inside. And then you will never win, or make anything better.