Accessibility links
Life In Rome Under Coronavirus Lockdown Life in Rome is turned upside down, writes NPR's Sylvia Poggioli: "Even for someone who has reported from war zones, it's unnerving ... like being suspended between the Dark Ages and a sci-fi future." 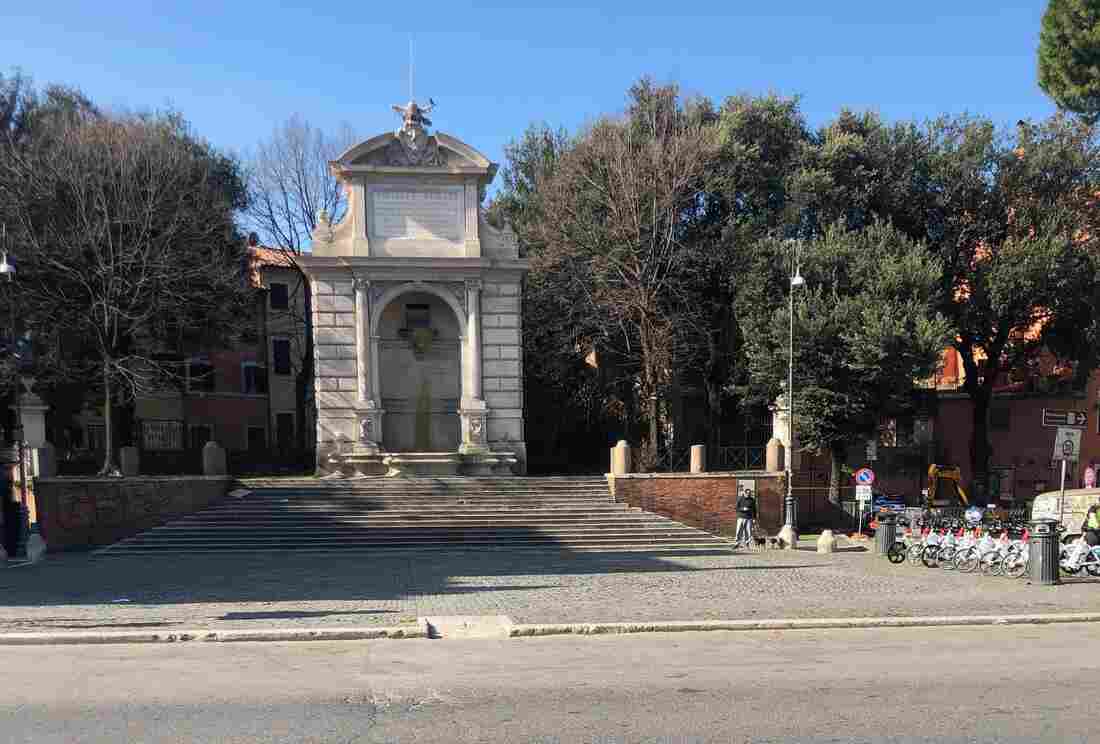 In normal times the pubs and cafes of Piazza Trilussa are the heart of Roman nightlife. Now all is shuttered; the rental bike stand is full and the only sound is the waterfall in the fountain. Sylvia Poggioli/NPR hide caption 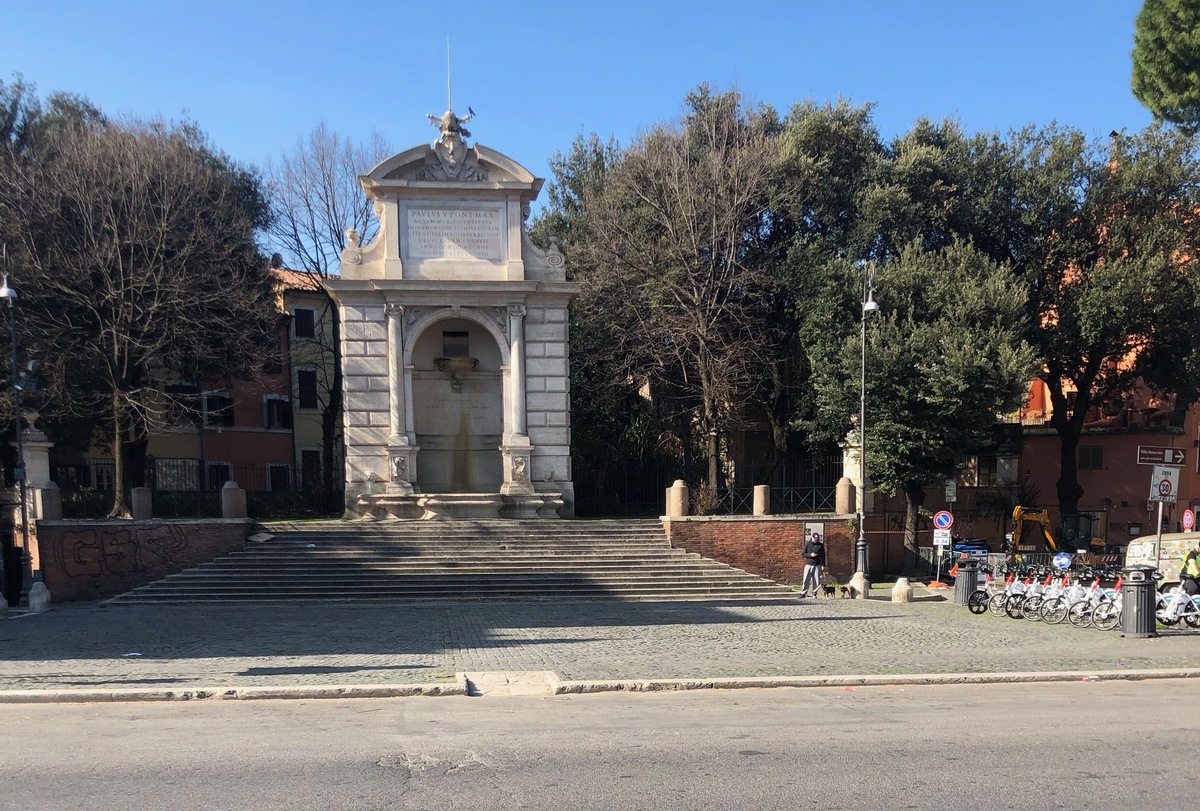 In normal times the pubs and cafes of Piazza Trilussa are the heart of Roman nightlife. Now all is shuttered; the rental bike stand is full and the only sound is the waterfall in the fountain.

It has been less than a week since, along with 60 million Italians, I was put under a government-ordered quarantine to try to curb the spread of Italy's coronavirus outbreak, the worst outside Asia. The new slogan is #iostoacasa — I'm staying home.

Overnight, life across the country has been turned upside down. Even for someone who has reported from war zones and experienced three months of NATO bombing in the Balkans, it's unnerving. I'm constantly wary. Of what? Who knows. Something is lurking around me and I don't know what it is. I wash my hands constantly — but I haven't been out all day and haven't seen anyone.

Life in Italy's COVID-19 red zone is like being suspended between the Dark Ages and a sci-fi future.

Here in Rome, all of a sudden the city's usual chaotic, horn-honking soundtrack has been transformed. With hardly any traffic, you can actually hear the squeak of rusty door hinges. The chirping of birds, an early sign of spring, is almost too loud.

The lockdown measures are strictly enforced. All restaurants, cafes, pubs, retail stores, cinemas, theaters, museums — you name it — are shut down until at least March 25.

The only exceptions are grocery stores, pharmacies and newsstands. The government wants to ensure all citizens have access to information, and many older Italians still prefer newsprint to small screens. 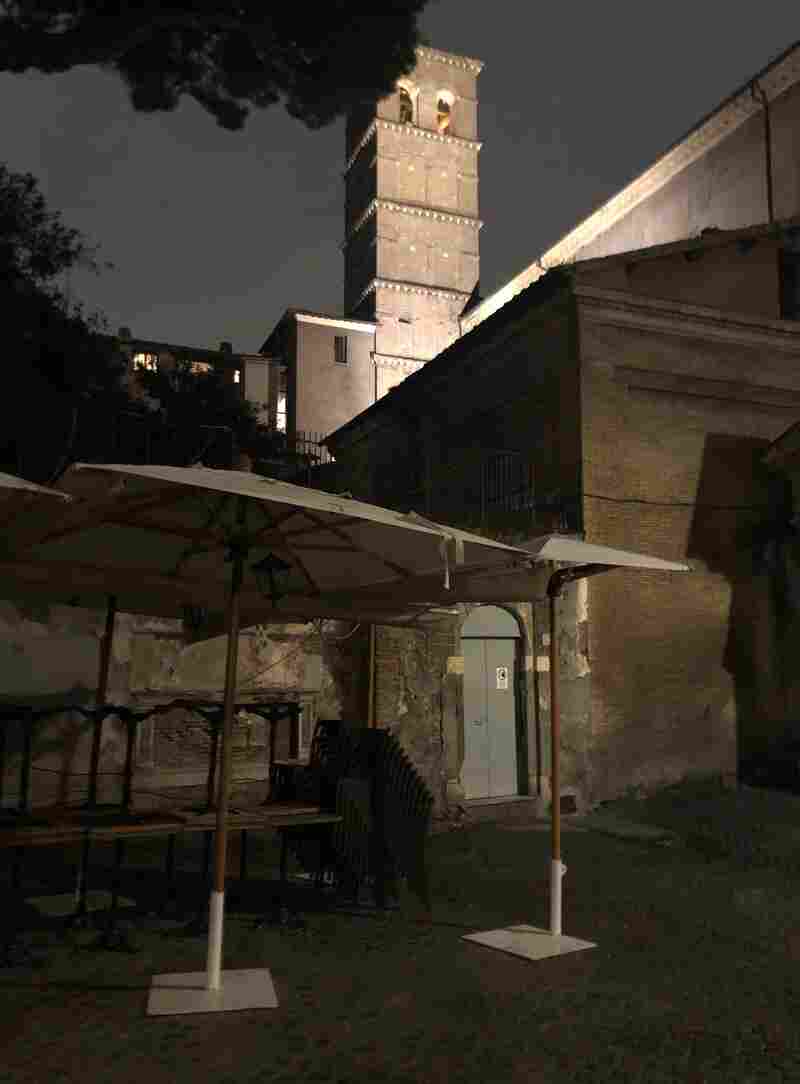 With Roman Catholic Mass banned, the bells of the Basilica di Santa Maria in Trastevere chimed for 10 minutes Saturday at 8 p.m., in a sign of solidarity and prayer for all suffering from the coronavirus. Sylvia Poggioli/NPR hide caption

Everyone who ventures out has to carry a police form, downloadable from the Ministry of Interior website, in which you have to "self-certify" why you are out. The only purposes allowed are shopping for food and medicines, health reasons, emergencies, work or returning home. Violators face three months in jail or a fine of about $230.

I live in Trastevere, in the heart of old Rome, not far from Piazza Trilussa. The square is known for its lively nightlife, and it's usually full of people 24/7.

Not anymore. Every single storefront is shuttered. The bike rental stand is full. The only sound is the waterfall in the large fountain that dominates the square.

There is some human activity nearby, in the Frutteria Er Cimotto, a high-end fresh produce shop. As I walk in, Federico Seracchiani is bagging artichokes for a lone customer. I ask him what it feels like here now.

"This neighborhood was always packed with young people, now nobody! It's totally surreal, feels like another world," he says. "The lockdown was the only solution, even if it is drastic. I think it'll work. At least I hope so."

In fact, some polls have indicated that more than 60% of Italians approve of the government lockdown decision.

As I continue to meander through my neighborhood, it seems the only inhabitants these days, along with birds, are cats and ghosts. Walking on these centuries-old cobblestones, it's hard not to think they've seen this before. It was here, along the Tiber River, that a plague broke out in 1656 that claimed more than 14,000 lives.

In normal times, visitors to Rome tell me how struck they are by the near absence of police and the abundance of priests. Suddenly, the priests have disappeared and cops are everywhere — roaming streets, making random checks that people are carrying their "self-certification" form.

I'm prepared. If I'm stopped by police, I'll tell them I'm a reporter and I'm out to report. As it happened, at noon Friday, the only person I ran into was another journalist, Marina Garbesi.

What's scary about the virus, she told me, is the enemy is invisible.

"It's like a shark swimming very far below the surface, very dangerous. We should keep this metaphor in mind," she said.

I asked her how Italians are handling the quarantine.

"Italians do not respect rules. That's not a stereotype, it's the truth," she replied. "But they know how to handle situations of great danger because they have a sense of community — even in big cities, people help each other out."

Those who need spiritual help, though, are out of luck. Roman Catholic Masses are suspended, as are weddings and funerals. But lo, this is the era of the blessed cellphone — some priests are celebrating Mass on WhatsApp.

And some of Rome's churches are still sending out messages the old way. At 8 p.m. Saturday, the bells of all the churches in Trastevere rang out for 10 minutes in a sign of closeness, solidarity and prayer for all those suffering from the consequences of the virus.

To record those bells, I had to venture out in the dark. I wondered: Should a cop stop me, would the Roman officer consider recording church bells a legitimate form of work? I doubt it.

But I went into the unknown anyway. The only sounds of the night were ambulance sirens in the distance, and all that moved were police cars with flashing blue lights.

My street is poorly lit, which for once served my purpose. I encountered no one as I moved furtively along the walls and in the shadows to Piazza Santa Maria in Trastevere, were I hid in an alley behind a potted plant until 8 p.m. When I returned home, I had one of the best church bell recordings I've ever made. But I also felt as if I had violated what truly feels like a wartime curfew.

While churchgoers may be consoled with the chiming of bells, more secular Italians have found a different way to exorcise the coronavirus demon. Many homes display banners with pictures of rainbows and the words of another new slogan, andrà tutto bene — everything will be OK.

And there's been an eruption of musical flash mobs from windows and balconies, as neighbors join in song — the national anthem, pop, opera and tarantellas.

Even if homebound, Italians are reacting — at least so far — with a characteristic sense of humor, brio and musical flair.