Accessibility links
'Later' Takes Us To 1990s Provincetown, As Hope For AIDS Treatment Rises As we find ourselves in the midst of a pandemic, Paul Lisicky's memoir is deeply affecting; we can recall the terror and frustration when no treatment or prevention was available for AIDS and HIV. 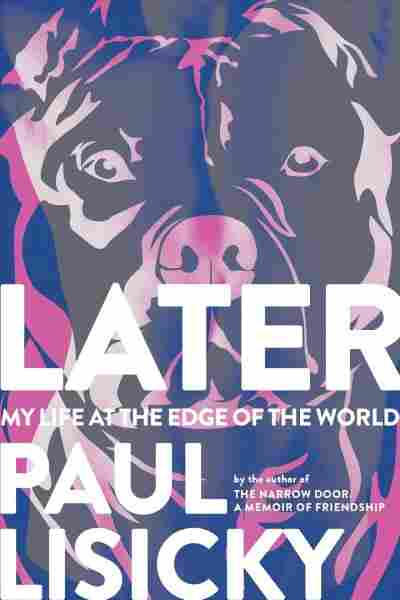 My Life at the Edge of the World

I wonder how Paul Lisicky's Later would read if the dawn of AIDS weren't in living memory.

Lisicky's memoir would no doubt be deeply affecting, but it is even more so for recalling that time of terror and frustration, when no treatment or prevention was available for a disease that causes prolonged, horrific death. The extent of loss and cataclysm to the gay community and their loved ones during that time surpasses words.

It is a cruel irony that we find ourselves in the midst of another pandemic, making Lisicky's book uncannily timely.

Lisicky, author of five previous books, sets Later in the early 1990s, where he's 30-something, fresh out of the Iowa Writers' Workshop, on a fellowship in Provincetown ("Town"), Mass. By this point, the human immunodeficiency virus (HIV) has been identified and, after years of militant and creative organizing by the gay community, therapeutic drugs are making their way to the public. Gay men are dying, but they are also living. Later takes place in the liminal space between those two realities: "The very fact of you gives others hope: You have sex. You don't die."

Moving to Town, a vortex of the AIDS pandemic, does not inflame Lisicky's furies, but instead serves as repatriation. Elsewhere, Lisicky has chronicled his mother's inability to embrace his homosexuality; his demanding, angry father; and his lifelong quest for his true self. Later finds him fully enmeshed in that quest. Town is home, but it is also utopia: "We can't live anywhere where the climate conditions are less than hothouse ideal."

Lisicky luxuriates in Provincetown, its accessible and public sex, its embrace of queerness, and the new normal that allows him to be the man he seeks to be. He courts risk; flirts with unsafe sex, which is to say flirts with death; but too, chooses life.

He casts off his J. Crew chore coat and other buttoned-down clothing that caused him to "disappear" and adopts the look of the "subculture" in Town. He vows never to "wear an outfit that doesn't in some way insist: Butch, butch, I am too butch to live."

He forms friendships and relationships, becoming half of a succession of couples, struggling to hit perfect pitch with boyfriends. His analysis of these relationships is part revelatory for his keen powers of observation, part heartbreaking, and all human. On his failure to get angry with Hollis, "Any queer man has learned how to keep his feelings in check."

With Noah, he shaves his body hair because:

"Body hair equals old, equals death.... We hate old people because we're not going to be old. We deny age, abhor it, including any of the gay men who have made it to fifty, sixty, unscathed."

Lisicky is a gifted writer. With meticulous emotional nuance, he not only captures his day-to-day, but manages to translate lessons from the day-to-day into a manual for living. He "tears into the harness" of his Catholic upbringing, which is already "several sizes too small," and composes a prayer that concludes: "If this is the end, Night, calm and carry and lamp us forward. Fold each year of us into your nest so that time may not destroy us."

In a section called "In Between," he writes:

"No wellness without illness, I realize this now. The world was never merely divided into two columns. My body has always known this, but my brain was slow to catch on."

Lisicky's most recent memoir, The Narrow Door: A Memoir of Friendship, is equally gorgeous. It braids two narratives of loss: Lisicky's friendship with the dying novelist Denise Gess, in parallel with the demise of his marriage to the poet, Mark Doty. Doty appears in Later, but in a different guise. He asks Lisicky to help care for his dying lover, Wally.

At Wally's funeral, "I hug Mark.... And there it is: the stunning proximity of aloneness." Lisicky compresses his marriage into two sentences: "Getting together with Mark. Breaking up with Mark, eighteen years later."

Lisicky's choice of title for Later carries an irony, as the book takes place earlier than the The Narrow Door. Later, it seems, connotes perspective, a look back on having survived, a reckoning with a lost time and place, a memorial to all the lost boys.

Later is beautifully composed and structured, with section headings that announce their content: Pee, Smooth, Butch, Null, accompanied by quotes from writers bearing wrenching witness to the cataclysm. The memoir is peopled with artists of note who turn up and/or live in Provincetown: the late Lucy Grealy (Autobiography of a Face and the subject of Ann Patchett's Truth and Beauty); poet Mark Doty; novelist Elizabeth McCracken; and artist Polly Burnell. No doubt, there are others whom this reviewer didn't recognize.

Lisicky concludes with a present-day epilogue. He's middle-aged, discussing daily PrEP with his doctor. These could be golden years, he notes, but H.I.V. continues to ravage communities around the world, including in America — Jackson, Columbia, El Paso, Augusta, and Baton Rouge. Even though his father has died at 91, in Lisicky's mind, "every death will always be an AIDS death; everyone will always die before their time, whether they're twenty-one or ninety-one."

And that perhaps, is Later's greatest lesson. In the meantime, Lisicky wants to "touch you while there's still time to touch you."