Accessibility links
Pence: Coronavirus Disruptions Could Last 'Well Into July' In an interview with NPR, the vice president defended the administration's response to the coronavirus but acknowledged that the government expects to be dealing with the crisis "for months." 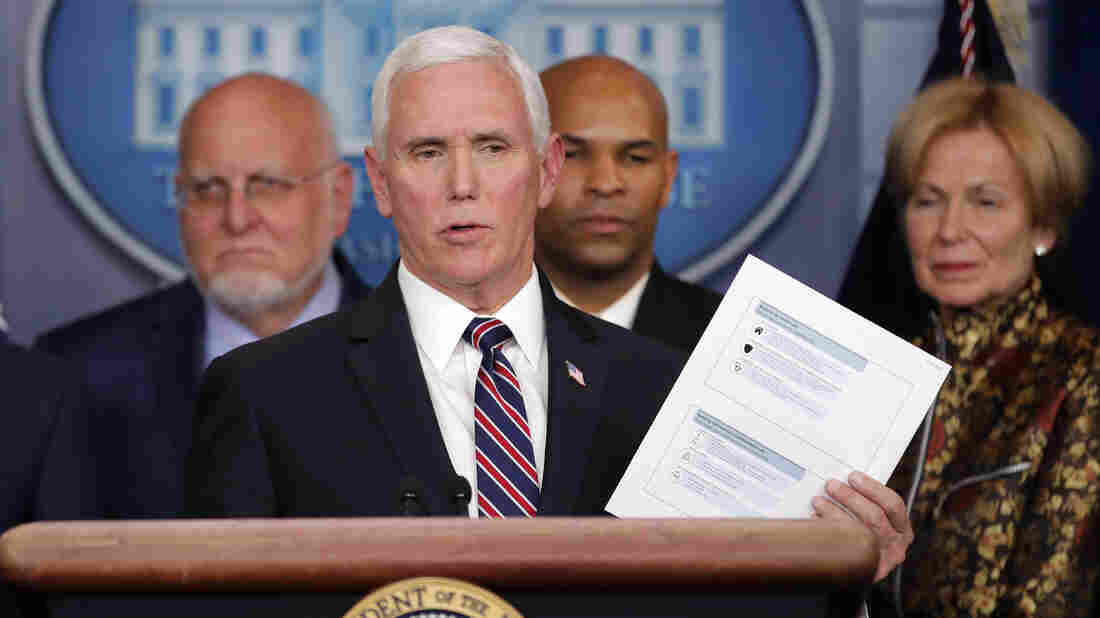 Vice President Pence speaks in the briefing room of the White House on March 9 about the coronavirus outbreak. Carolyn Kaster/AP hide caption 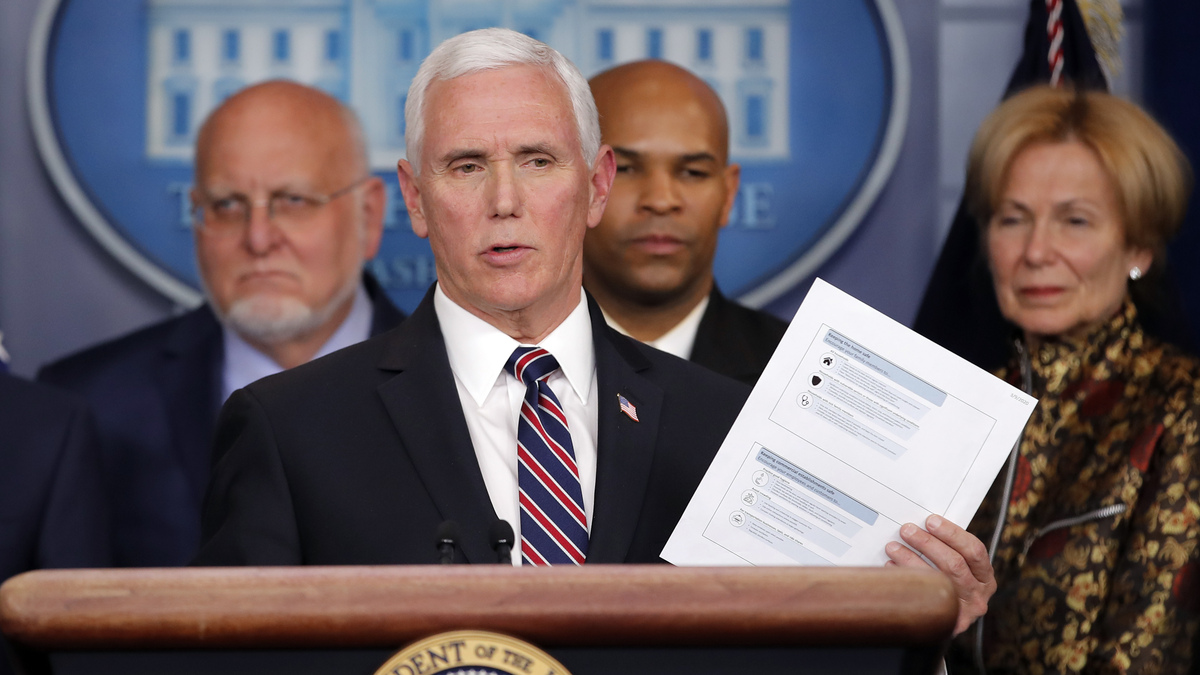 Vice President Pence speaks in the briefing room of the White House on March 9 about the coronavirus outbreak.

With the Trump administration hoping to inject as much as $1 trillion into the economy to deal with the mounting coronavirus crisis, Vice President Pence warned on Tuesday that disruptions from the outbreak could continue until at least midsummer.

Speaking one day after President Trump unveiled sweeping new guidelines advising Americans to avoid bars, restaurants and gatherings of more than 10 people for 15 days, the vice president said the administration is bracing for a severe economic disruption.

Pence's remarks came as the administration announced that it will call on Congress to approve a massive new economic stimulus package that would send direct cash payments to Americans. The $1 trillion price tag under discussion would eclipse the $787 billion stimulus package that Congress passed in 2009 at the height of the financial crisis.

While the vice president would not go into detail about how bad the administration expects the crisis to grow, he said "many thousands" of Americans will contract the illness.

But, he said, "We are still at that point in the spread of the coronavirus in the United States where strong action, common sense, personal hygiene and what they call social distancing for now, among every American, can significantly reduce the spread of the virus."

On Monday, a report by an epidemic modeling group at Imperial College London said that until a vaccine was available — which could take as long as 18 months, according to Pence — drastic restrictions on work, school and social gatherings would be needed.

The report said that with relatively modest restrictions on social activity only, deaths could top 1 million. The researchers found that if the U.S. took no action whatsoever to slow the spread of the coronavirus, as many as 2.2 million Americans would die.

With the number of cases continuing to climb, Americans appear to be losing confidence in the federal government's handling of the crisis. An NPR/PBS NewsHour/Marist poll released on Tuesday found that only 46% of Americans feel the government is doing enough to prevent the spread of the coronavirus, down from 61% in February.

And at a time when confidence in public officials is considered critical to coordinating a response to the outbreak, the poll found majorities of Americans lacking trust in President Trump. Sixty percent of Americans said they had not very much or no trust at all in what they are hearing from the president. Only 37% said they had a good amount or a great deal of trust.

That mistrust has been driven, at least in part, by comments by the president seeming to downplay the severity of the coronavirus. He has compared the virus to the flu, even though the administration's own experts have called it "10 times more lethal than regular seasonal flu"; he said in February "One day — it's like a miracle — it will disappear"; and as recently as March 7 said he was "not concerned at all" when asked about the virus spreading closer to Washington and the White House.

The president's tone has since shifted. On Monday, he described the coronavirus as "an invisible enemy" and conceded that it's "not under control for any place in the world."

The mixed messaging has apparently contributed to a deep partisan divide in how Americans perceive the threat. Despite 6,300 cases and more than 100 deaths nationwide as of Tuesday, only 56% of Americans consider the coronavirus "a real threat," down 10 percentage points from February.

Pollsters found that shift being driven by Republicans — 40% of whom now call the coronavirus a real threat, down from 72% in February. Conversely, more than 3 in 4 Democrats now say the outbreak is a real threat.

Those who are most at risk for getting very sick, according to the Centers for Disease Control and Prevention, are older people and those with serious chronic medical conditions like heart disease, diabetes or lung disease.

The vice president also defended the administration's response to the crisis, saying that had President Trump not suspended travel into the U.S. from China, "We would likely look very much in this country like Europe does today."

"No American," he added, "wants to inadvertently spread the coronavirus to a senior with a serious underlying health condition or any other American with an immunodeficiency. We're all in this together."